John 20:24-29 — The Wounds on Jesus’ Resurrection Body and What They Say about Our Wounds. 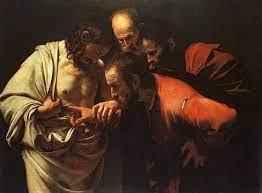 A sermon preached on April 11, 2021 based upon John 20:24-29 entitled “The Wounds on Jesus’ Resurrection Body and What They Say about Our Wounds.”

Immediately before our Gospel reading for this morning Jesus suddenly appeared to his disciples huddled in fear behind locked doors on the first Easter evening and blesses them with peace.

The disciple Thomas was missing that night and as we pick up the story, he steps the to fore. You may have heard of “Doubting Thomas”, as in don’t be like Thomas with his unwillingness to believe the testimony of the other disciples.  But I think Thomas gets a bad rap.

There are two kinds of doubt.  One I would I would call superficial doubt, which is the shallow unwillingness to engage the story of Jesus and the claim he makes upon our lives.

Thomas doesn’t exemplify such doubt.  Like I said last week when we were looking at Mark’s account of the first Easter morning, Thomas deeply loved Jesus.  Based upon what he knew about reality, Thomas just couldn’t believe the other disciples’ testimony without a mind-altering experience of his own.  Thomas’ doubt expresses a deep longing of the heart for an encounter with the risen Lord.

Listen for the word

But Thomas (who was called the Twin), one of the twelve, was not with them when Jesus came. 25So the other disciples told him, ‘We have seen the Lord.’ But he said to them, ‘Unless I see the mark of the nails in his hands, and put my finger in the mark of the nails and my hand in his side, I will not believe.’

I invite you to notice two things:

Thomas has been traumatized by the experience of recent days – most specifically, by the crucifixion of his beloved Lord.  The other disciples have entered into a resurrection world, one of undying hope but he is still in a crucifixion world.

We are familiar with life in a crucifixion world – especially in the past 13 months of this pandemic and all that has gone with it – a world full of pain and trauma in various forms.

There is often a kind of peer pressure we feel when the crucifixion world is most intensely the one of which we are most aware.  We feel like we’re hanging on by a thread, and someone asks us “How are you?” We feel obligation to say, “Oh fine, just fine.”  There can be a variety of valid reasons to “lie” like this.  But unfortunately, when we do it perpetuates a certain collective deception that most people are doing just fine which intensifies the feeling when we are hanging by a thread that “I’m the only one,” which simply intensifies the pain. There a saying, “Don’t judge your insides by other peoples’ outsides.”

So Thomas gets credit for resisting peer pressure and speaking his truth about not being okay.

The other thing to note is that the other ten disciples deserve credit for making room in the circle for Thomas.  They don’t toss him out because he won’t accept what they believe.

In this earliest of churches, there is room for doubts, for questions, for struggles.  Faith isn’t a matter of signing on the dotted line regarding your willingness to give assent to every line of the Nicene Creed.  The journey of faith will necessarily include wrestling with doubts.

A week later his disciples were again in the house, and Thomas was with them. Although the doors were shut, Jesus came and stood among them and said, ‘Peace be with you.’ 27Then he said to Thomas, ‘Put your finger here and see my hands. Reach out your hand and put it in my side. Do not doubt but believe.’ 28Thomas answered him, ‘My Lord and my God!’ 29Jesus said to him, ‘Have you believed because you have seen me? Blessed are those who have not seen and yet have come to believe.’ (Which is, frankly all of us.)

Thus ends the reading, may God bless our hearing of the word.

Have you ever given any thought to the wounds that appeared on Jesus’ resurrection body — the places where the nails cut through his hands and the spear pierced his side? This is contrary to how we might imagine the glorified body of Jesus – that is, perfect and flawless.

But the wounds remain.  They no longer torment Jesus the way they did when he hung on the cross, but they remain visible as a reminder of what he suffered on the cross.

These wounds have, in a sense become something beautiful — the means by which Jesus is recognized by Thomas.  This is the same Jesus who suffered with and for all of us. Jesus’ wounds – healed, but visible – convey to us Jesus’ ongoing compassion towards us regarding our wounds that have not yet been healed.  This is certainly true where we suffer physical wounds, but here I am talking primarily about emotional and spiritual wounds.

All of us are wounded in various ways in life because we live as a part of the broken, sinful human race whose capacity for love is flawed, which means we inflict wounds on one another, often unknowingly.  We are also wounded because of the reality of death because death means grief – a kind of wound.

We carry around the wounds of our past – their trauma persist in the neural circuitry of our brain.  Healing these wounds isn’t easy, but it is possible.  It is love – grace — that heals these wounds.

The wounds on Jesus’ resurrection body also expresses the truth that there is meaning to our suffering – something of eternal significance in our wounds.  This meaning more often than not is not evident when we are going through the suffering.  The pain of the wound just seems senseless.

There is this little story that Rachel Naomi Remen tells in one of her books that I have told a number times because, as simple as it is, it moves me to tears and helps me make sense of life.

It involves a woman in her sixties who, when she was a young woman suffered from an eating disorder in the days before they names like bulimia or anorexia.  In those days little was known regarding how to treat such an illness.  She remembered how terribly alone she felt – a sense of a living hell.  She often felt as though she was holding on by a thread, often doubting that she would survive her affliction.  She remembered thinking to herself if she could just meet someone who had survived what she was going through it would mean the world to her, but she never did.

It took time – a lot of time – but gradually she grew free from the self-destructive impulses of the disease.  Somehow – she knew not how – she did survive by the mystery that is grace.

And so, forty years later – a married woman with grown kids – retired and with time on her hands she sees a notice for a support group for people suffering from eating disorders.  She feels moved to begin attending the meetings simply by way of being supportive.  She introduces herself as someone who survived an eating disorder as a young woman.  Otherwise, she says little in the group meetings – she simply listens as the group of mostly young women tell their stories.

At the end of one of the meetings a young woman comes up to her, calls her by name and with tears in her eyes tells the woman how much her presence means to her.  In response, mostly the woman feels… embarrassed.  She doesn’t know the young woman’s name – can’t remember ever having had a conversation with her.

Driving home she continues in her state of embarrassed bewilderment, trying hard to remember some interaction she overlooked with the young woman.

As she pulls into her driveway, it suddenly dawns on her.  She collapses into the arms of her husband, concerned by the tears he sees rolling down his wife’s cheeks. Looking into his eyes, she says simply, “I’ve become the person I needed to meet all those years ago.”

This story moves me deeply, because I think it expresses a truth that is hard to recognize in the present.

The things we suffer that often seem so senseless, in the big picture, if we intentionally seek to keep returning to the path Jesus pioneered for us become over time the basis by which we can be – in the words of Henri Nouwen – “wounded healers.”

We remember the intensity of the pain of the past – but the pain is no longer debilitating – rather, it becomes the basis by which we can come walk besides others in their pain as instruments of blessing and healing.

I’m a preacher – been one for 40 years.  I recognize that sometimes people assume that because I am one, I must possess a quality of faith that never struggles with doubts – that I have somehow learned to fly through life above the fray of such things as fear, temptation to despair, and grief.

Throughout these 40 years of ministry there have often been times when I felt like I was holding on by a thread.  The feeling was more common in my early years, but I am not immune to the feeling now.  What I have learned, though is that precisely because I know something of what holding on by a thread feels like – my own woundedness – sometimes allows God to use me as a channel of grace to others.  I have come to believe, that most of us who go into the ministry – as well as people who go into other kinds of healing work – therapists say – do so consciously, or unconsciously seeking healing for our own wounds.

There is this choice we must make daily whether to allow our own woundedness to lead towards connection to God and others. The image that comes to mind is that we are each a little castle with a draw bridge across a moat.  The draw bridge is our woundedness.  Each day we must decide whether to pull the bridge up and isolate ourselves, letting our wounds fester, get infected – or let the bridge down across the moat.  There is a risk in doing so — someone might poke a stick in our wound — but it is only in lowering the draw bridge that we can begin to connect and find healing.