A Heart Healing at the Resurrection Breakfast 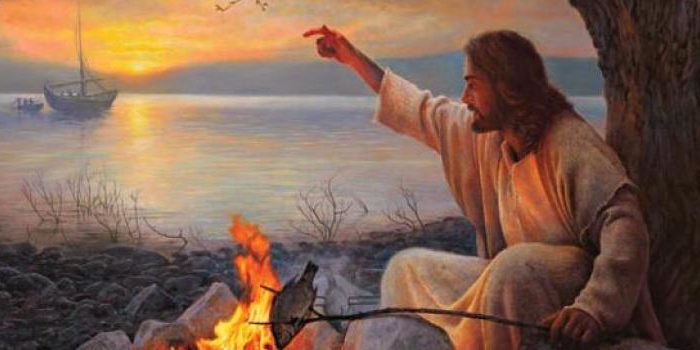 Filed under: Pastor Jeff’s Sermons
A sermon preached on April 1, 2018 – Easter Sunday – that is based on the story of Jesus’ appearances in John 21. During the Children’s Sermon I took some time to tell the story of Jesus appearing to Magdalene in John 20:1-18.

So the Gospel writer John tells us that Mary Magdalene told the male disciples that she had seen Jesus alive again. We aren’t told how they responded. Men tended to discount what women had to say in those days – still do sometimes. Hopefully it gave them some bit of hope.

Later that night they got their own chance to experience Jesus alive again. They were huddled together in that same upper room where they had shared the Last Supper with Jesus. The doors were locked. They were terrified, afraid that the same people who nailed Jesus to a cross might also come for them.

They were filled with shame. They had abandoned Jesus when they needed him most.

Suddenly Jesus was there — his new resurrection body capable of passing through walls. “Peace be with you,” he said. And he breathed on them the Holy Spirit.

And Jesus gives them a job. Go out there and tell people their sins are forgiven! Release them from the burden of guilt they carry around with them.

Thomas wasn’t there, and his post traumatic stress from having watched Jesus die on the cross leaves him refusing to believe what the other disciples tell him — that Jesus is alive. He needs to stick his fingers in Jesus’ wounds from having been nailed to the cross.

So a week later, in that same locked upper room, Jesus appeared again for Thomas’ sake. The wounds were still on Jesus’ resurrection body, but they had become something beautiful – the sign of Jesus’ great love.

And then the Gospel writer John seems to bring his story to the end, saying there are a whole bunch more stories he could tell us, but he figures he’s told us enough that having heard them we might believe, and in doing so have life in Jesus’ name.”

To live life to the fullest. “Abundantly” is how Jesus put it.

But curiously, after having written what appeared to be the end of the Gospel, John took up his pen and wrote another chapter, told another story — a story that suggests that perhaps it took the disciples some time for the love of Jesus and the hope of the resurrection to sink deep down inside them to heal the wounds of their hearts — that perhaps the same is true with us.

Some time has passed. We know this because in the story John added on we find the disciples back in the north country – in Galilee – the place where the whole story started — and it took several days to travel there from Jerusalem.

They are back by the sea where Jesus first called Peter and others to leave behind their fishing nets and to follow him. Peter says, “I’m going fishing,” and six of the others say, “We’ll come too.”

The fishing they did involved going out on a boat at night, casting down their rough nets into the dark water, over and over. It was hard tedious work, but generally they could count on eventually catching some fish.

But not this night. They seem to mess this up too. Through the long night they catch nothing other than exhaustion, reinforcing their sense of themselves as being a bunch of screw-ups.

Just as the day is breaking, Jesus appears on the shore, but as with Mary at the tomb, they do not recognize him, not even when he calls out to them, ”Children, you don’t have any fish do you?”

Nope, they answer. Not a one.

“Cast your net on the other side, and you will find some.”

What do they have to lose? They follow the stranger’s directions, and sure enough, their nets come up full of fish. Suddenly, they know who it is on the shore.

Then something happens that is both comical and revealing. In those days fishermen would strip naked to fish at night – you’re going to get soaked doing this work, and since it’s dark nobody’s going to be really caring. You might as well set your clothes aside so that you’ll have something dry to wear when you’re done.

But now with the light breaking and the discovery that Jesus is there on the shore watching, like Adam and Eve in the garden Peter is suddenly ashamed to be found naked. He wants to get to Jesus as quick as he can – but not naked as the day he was born, for God’s sake. So he pulls on his clothes and then jumps into the water to swim to shore, completely soaking his clothes.

The others follow in the boat, dragging the net full of fish.

On the shore they discover that Jesus has prepared a charcoal fire and that upon that fire some fish are cooking and some bread baking. “Come to breakfast,” he says. “Bring some of the fish you caught.” Like that time he fed five thousand people out in the wilderness, they’re going to have a feast.

So they chow down, basking in this great love feast – this resurrection breakfast.

When they’ve finish eating, Jesus comes and sits directly in front of Peter. That charcoal breakfast – it’s there to cook the breakfast, but it also is there to call to mind something.

There is only one other mention of a charcoal fire in the Gospels. It occurs the night Jesus is arrested. It was beside a charcoal fire when Peter – trying to stay warm – denied knowing Jesus three times, after having boasting to Jesus about how he would never abandon Jesus in spite of what the others do because of how much he loved Jesus.

Peter is in need of a healing of the heart. In spite of having seen Jesus alive, he continues to suffer from a profound heart wound – this sense of unworthiness that holds him back from living the abundant life Jesus is calling him to. A voice of self-condemnation arises within him that is related to the shame he feels from his glaring failure of that long dark night – the crowning failure of what now seems like a lifetime of failures big and small. And that voice rises up in particular whenever he might consider trying something new, something he might fail yet again at.

So looking deeply into Peter’s eyes beside that charcoal fire, Jesus leads Peter through a ritual of heart healing. It’s painful this healing process, but necessary. Three times Jesus asks Peter, “Do you love me?” — three times corresponding to the three times Peter denied Jesus beside that first charcoal fire. And with tears in his eyes, Peters answers each time: “Lord, you know everything – you know I love you.”

And each time Peter professed his love, Jesus told him: Feed my sheep, tend my lambs, feed my sheep.

Peter, and all the rest of us for that matter – were put on this world to love. That’s it.

I was talking to a young man recently who expressed an unusual amount of self-knowledge. He said that he was aware that deep inside him he had a deep capacity for love -– but that he was frustrated by a blockage in his heart that kept this love from getting expressed. He sensed it had to do with feelings of unworthiness – a recognition of sins committing that left him feeling unworthy of expressing such love. These sins weren’t unusual sins. He had lost his temper at times with people he cared about – said things he wished he hadn’t. Somehow his sense of unworthiness left him unable to live the abundant life that would involve letting that deep reservoir of love out.

There is a wound like this young man — like Peter — in all of us. It’s a heart wound that we manage to keep buried a lot of the time by avoiding putting ourselves in situations where we might experience failure or rejection. When it rises up within us we feel profoundly unlovable. And it holds us back from letting God’s love flow through us.

I read somewhere of a poll that asked people what are the words they most want to hear spoken to them.

The first isn’t hard to guess: “I love you.” The second was, “I forgive you.”

Can you guess the third? “Come to supper.” These are the messages of this story John chose to add to his Gospel — except in this case, the words are “Come to breakfast.”

Thursday was the Last Supper. This is the First Easter Breakfast. That’s what we’re celebrating this morning. The Resurrection Banquet that can heal our broken hearts.

When you take the bread and the cup freely offered, let the love of Jesus and the hope of the resurrection sink deep down into your body and spirit. This is a new beginning that sets us free to love the people God places in our lives, both the ones well known to us as well as the ones who appear to us as completely strangers in whom Jesus comes in disguise.