Mark 10:17-22 — An Invitation from Jesus to Experience the Kingdom of God 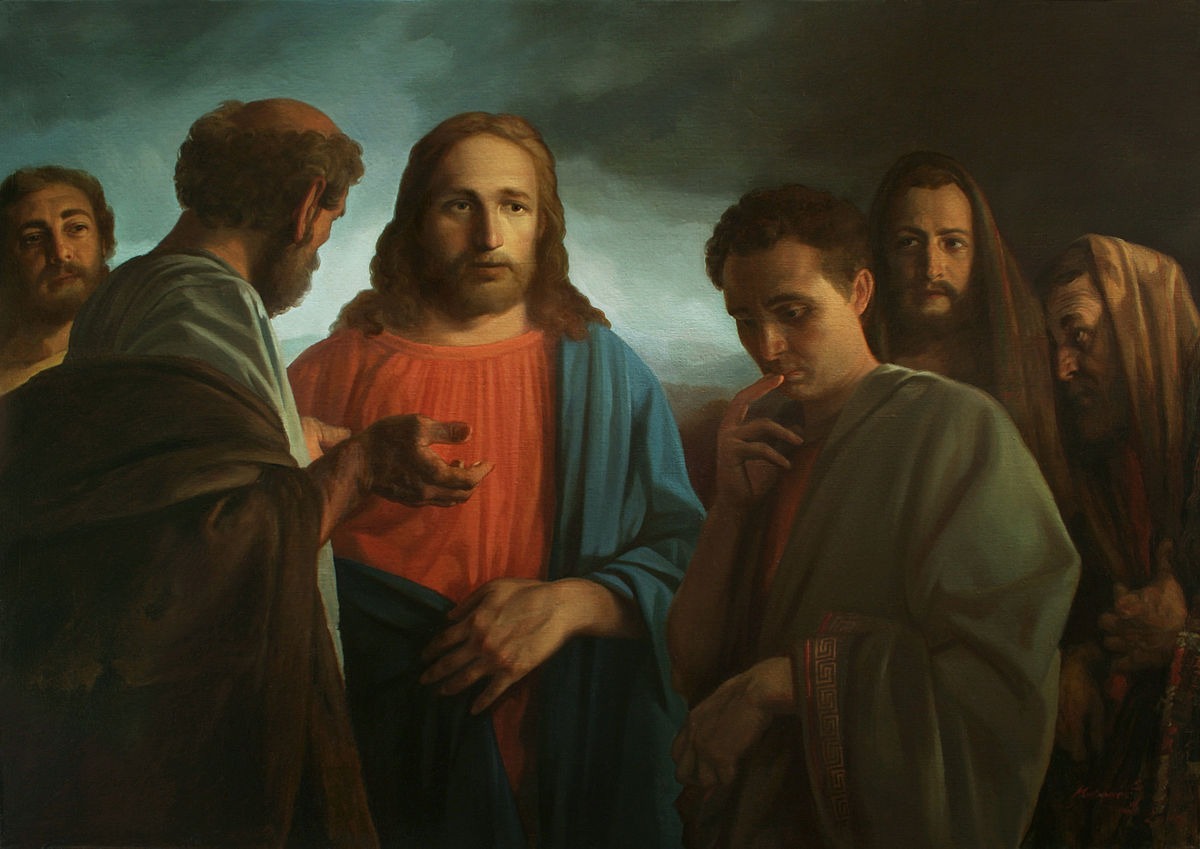 There is a story about a little boy with a brand-new baby sister.  In spite of the inevitable resentment a first born typically feels with the arrival of sibling, this little boy seemed quite drawn to his baby sister.

At a certain point the boy began to ask if he could spend some time alone with his baby sister.  His parents were puzzled by this request.  Aware of the dynamic of sibling rivalry, they were a bit wary of their son’s request, but the little boy kept returning to the request.  And so eventually they granted the boy’s request, knowing that they could leave him in his baby sister’s room with the baby monitor on so they could listen in for anything of concern.

For several seconds there was silence other than the sound of their daughter’s occasional cooing as the boy stood over his baby sister as she lay in the crib, gazing into her eyes. Finally, the parents heard their son speak these words: “Tell me about heaven.  I’m beginning to forget.”

Whether this is a story that actually happened, I have no idea.  But it expresses the truth that ultimately babies come to us from God, and an intuitive sense we have that babies enter life possessing a kind of wordless wisdom, which is part of the reason we find ourselves so drawn to them.

If we were to try and put into words this wordless wisdom we might say babies recognize life as the awe-inspiring miracle it is — a mysterious gift soaked through with wonder, and that at the deepest level we really are all connected – all one, and at that same deep level we can trust that we truly are in good hands.  In a word, a baby’s “soul” is fully present.

The story also expresses another truth – the one expressed in the little boy’s request of his baby sister — and that is that even as something is gained in growing up – something precious is also lost.

But it can’t be helped – what we call “growing up” is a requirement if we are going to manage to survive in this world.

Part of what growing up involves is as I mentioned a couple of weeks ago in a sermon the establishment of a strong ego – the discovery of the power of the word “no” by which a child establishes another truth, which is that even as we are all connected on the deepest level, on another level – on a very practical level – we are separate – that we need to learn to make choices and take responsibility for ourselves.

And as parents it is our job to support our children in their quest for independence and self-sufficiency.  To this end, we help our children gain the power of language with the mastery of words.

But as important as language is, learning words has the effect of slowly but steadily taking the child away from that original sense of awe and wonder.

The child points up in the sky and asks, “What’s dat?” and we say, “Oh, that’s a cloud.”  A new word is mastered, which is cause for celebration and yet while something is gained something is also lost, and that is because no two clouds are exactly alike, but with a single word we learn to lump all clouds together, and the wonder and mystery of each new cloud we encounter becomes harder to access.

As parents (along with teachers and others) we also have the responsibility to try and pass on the character traits and skills they will need to achieve some success in the world – to be able to hold down a job, establish a career, earn money, pay taxes, be self-reliant – in a word, to be an adult.

And hopefully along the way we also succeed in training our children to have good manners and a reliable moral code – to be what we call a “good person” which I know is one of the primary reasons parents bring their children to church — to receive assistance in this sort of training — to help their kids recognize the difference between right and wrong.

And so it is a big job that is handed to parents and all those who support the parents in raising a child up to adulthood, and naturally the level of success in carrying out this job varies from child to child.

With all this in mind, in our Gospel story this morning the impression we get is that the man who runs up to Jesus is the product of a pretty good parenting job.

He is courteous, appropriately kneeling to show the proper respect before the famous rabbi Jesus.  In the course of their conversation Jesus asks him about whether he has kept the basic commandments that address human relationships and I think we can believe him when he says he has since his youth.  He has a moral code. His parents have taught him well.

Towards the end of the story we learn that the man has many possessions – suggesting that he has been a success as the world measures success – he’s managed to earn more money than most.

Courteous, ethical and a success in this world, the man, you could say, is a son that would make a parent proud.

And yet he “runs” to Jesus implying some desperation on his part. Clearly, in spite of having successfully achieved adulthood, the man is conscious of missing something precious in his life – something connected to that wordless wisdom of the little baby.  The words at his disposal are inadequate to express the thing he longs for and so he refers vaguely to “eternal life.”

The Gospel writer specifically tells us that Jesus “looked” at the man, and that he did so with love, which means he gazed into the man’s heart, diagnosed the nature of his spiritual sickness and offered a prescription for what ails him:

“You lack one thing;” he tells the man, “go, sell what you own, and give the money to the poor, and you will have treasure in heaven; then come, follow me.”

These words Jesus speak have the capacity to make many of us – myself included – feel pretty uncomfortable.  It is worth noting that this is the only person Jesus ever gave this specific directive to sell all his possessions, so it’s not like we have here a universal requirement for those who would follow him, though the concern for the plight of the poor implied in Jesus’ words would certainly come under that category.

Nonetheless, the story makes us squirm, because though we may not come under the category of rich, we are pretty attached to our possessions, our money.  Jesus had a lot to say about the spiritual danger with which money presents us.  We look to money to be our safety net – and the possibility of not having that safety net makes us pretty anxious.

I think it is important to examine our attachment to money and the anxiety we have about it, and when it arises try to remind ourselves that God really is the one in whom we can trust.

But there is more going on in this story.  By telling the man to give away all his money and to follow him, Jesus is trying to lead the man into an experience of the kingdom of God, which is another way to express the mystery of what the man longs for.

I led with the little story about the boy and his baby sister because I think there is a direct connection between the words Jesus spoke immediately before this conversation and what Jesus saw when he looked into the man’s heart, and perhaps sees in our hearts as well.

Receiving the kingdom is a matter of perception – it involves the way we look at life.  It is a grace filled reality, as Jesus’ parables suggest hidden in the ordinary. A sower casting seeds on the ground for instance,  or a seed buried in the earth.  With the right way of looking at life we may find ourselves surprised to see the kingdom of God in the very midst of us.

How does the man look at life?  I think there is a clue in the way he phrases his initial question to Jesus.  “What must I do to inherit eternal life?”

Children are much better than adults at receiving unexpected gifts.  Give a child a gift and they will be delighted.  Give us adults a gift and we are likely to feel at least some degree of guilt or anxiety.  Our minds begin to anxiously ask questions like, “Did I do something to earn this gift?  If not, I’m now indebted to this person and I need to figure out a way to pay them back.” A gift can make us feel a little out of control – not something we adults like to feel.

So, I think Jesus was inviting the man to turn and become like a little child when he told him to give away his safety net and follow him.

It was like what I think Jesus was up to earlier when he sent the disciples out two by two into the world without their safety nets – food, money, weapons – to share the good news.

He was giving them an opportunity to learn how to let go and trust and get comfortable with the gift of hospitality that strangers would show them.  To trust also that they themselves are a gift to their hosts.

This journey Jesus is inviting us on is a little like learning to ride a bike.  To turn and become like a child while retaining what’s good about being an adult is a balancing act.  He’s not giving us license to be a self-centered brat after all – and if truth be told that can be another manifestation of little children.  As followers of Jesus we need to be responsible, help make the world a better place and care for the poor. Don’t be a slouch.

But simultaneously we are called to embrace the opportunities life gives us to see the world with the eyes of a little child.

I was being an adult the other morning and writing my sermon.  After sitting in front of my computer for three hours, I thought I should take a break and do another adult thing – go out in the yard and pick up the dog poop.  And I went outside and discovered it was an exquisitely beautiful day, a pure gift.

I did the job I had gone out to do, but I slowed down, delighting in being outside, letting go of my need to get as much done as possible to justify my existence. Something shifted inside me and I simply enjoyed the gift that was the present moment.  I let go of the burden of having to fix the world, and realized that it is filled with wonder and beauty, if I but have the eyes to see it.