Matthew 2:1-12 — Attending to the Spiritual Journey 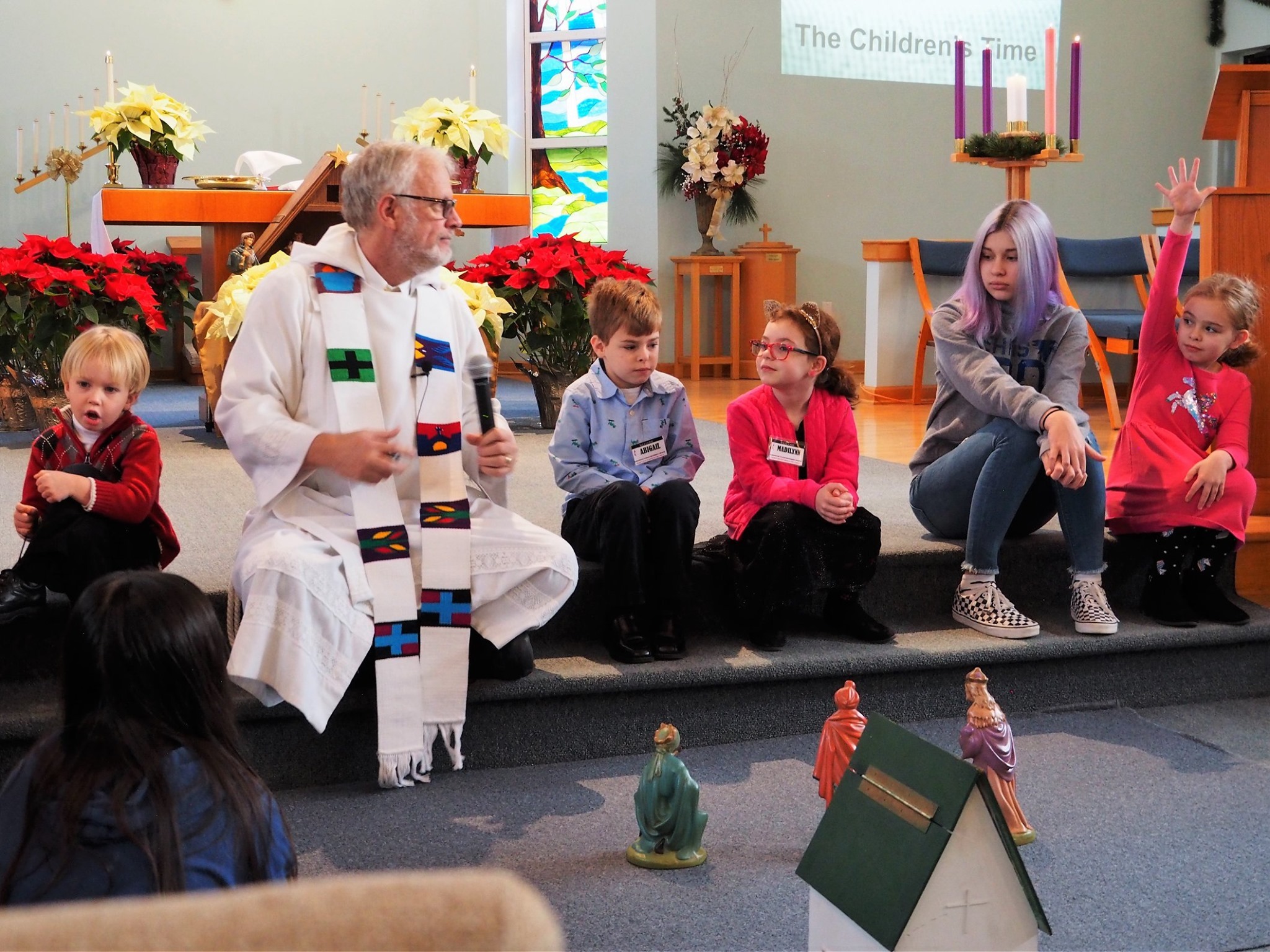 A sermon preached on January 5th, 2020 – Epiphany Sunday – based upon Matthew 2:1-12 entitled, “Attending to the Spiritual Journey.”

In this life we are all obliged to engage in what you could call a “struggle”, or a “battle” or a “quest.”  It is the quest to carve out a place for ourselves in this world.

We were encouraged to actively engage this struggle very early on when our parents encouraged us to get good grades because they wanted us to succeed.  This battle by necessity has a hierarchy of winners and losers.  It assumes there is a limited amount of the good stuff in life whether these be money, good jobs, status, or even love.

This quest is unavoidable because it involves our earthly survival, but as time passes in our lives perhaps we become aware that there is another more important kind of quest, one our Gospel story invites us to contemplate.

There are two Gospels that tell stories regarding the birth of Jesus, and it is interesting that that they focus on people who find themselves on different ends of the winners and losers hierarchy.  Luke’s Gospel emphasizes the plight of the poor, and so we find certain poor shepherds – who as homeless, social outcastes have largely lost the first battle of life.

Luke’s story reminds us that the deck is often stacked in such a way that it becomes impossible for some people to “win” because of the families they are born into or because of deeply ingrained prejudice and unjust economic systems.

But in the story we just heard from Matthew’s gospel the focus is on people who to some extent have succeeded in life’s first quest.

We don’t know a great deal about the magi who traveled from the East but what is clear is that they had the opportunity for a rather elite form of education as astrologers and that they had the financial resources to set aside their jobs and set off on such a long journey.  As such we can label them as successful by the standards of the world.

What is clear is that something awakens within them when their attention is captured by the new star rising in the east that sets them on a different kind of quest.

The journey they set out to make most have seemed foolish to their neighbors. Why leave this place of comfort where you have successfully carved out a place for yourself and go on a grueling, dangerous journey into the unknown?

But something deep inside the Magi compelled them to begin this quest, and that something was the awakening of their soul.

Ultimately it is our soul that is our deepest identity and our souls can remain dormant for long stretches of our lives.

But eventually the soul calls for our attention, though we can try hard to distract our soul’s call.  If we have some measure of success in the first quest then the soul’s call can be heard in the little voice inside that asks, “Is this all there is in life?”  It can take the form of a gnawing emptiness that the things we fight for in the first quest can’t fill.

Sometimes adversity can be the occasion for the awakening of our souls.

This coming Saturday we will celebrate the life of our brother Bob Keller.  Early on in Bob’s life he was conscious of spiritual longings.  He considered entering the ministry, but instead found employment in the corporate world.  For the first twenty years of his adult life Bob climbed fairly high on the ladder of success.  But his declining physical health forced Bob to leave the corporate world on disability.  His awakened soul compelled him to ask the question, in the end what is life really all about? He recognized that much of things he had focused himself on in the rat race of corporate life weren’t really all that important after all.   He embraced a spiritual journey and over the last twenty years of his life devoted himself to the service of his community.

The journey of the Magi symbolizes the spiritual journey that our souls call us to embrace.  It involves letting go of unquestioned certainties to move into the unknown mystery that is at the heart of life.  For the Magi this meant leaving behind the comfort and familiarity of their own culture, their own religion – to encounter the wildness of the natural world in which humans must give up their sense of being in control.  The journey involves encountering people of a different culture and religion with open hearts.

When the Magi reach Jerusalem they come face to face with King Herod who is the poster boy for somebody who has “won” the first quest.  Herod is at the top of the food chain – the wealthiest, most powerful man in Judea.  Herod is the sort of person of which Jesus would later ask, “What does it profit a man to gain the whole world but to lose his soul?”

We quickly see how fragile Herod’s sense of himself is as its foundation is his ego rather than his soul.  The news brought by the Magi that a new king has been born in the land whose birth has been foretold in the stars leads Herod to do the “shake in his boots with fear” dance.  He can only experience this news as threat – not as the invitation it is to engage a holy mystery.

There is an interesting detail in the story that caught my attention this week.  If the news of the Magi causes Herod such distress, why doesn’t he set off himself on a journey to find the child?  Instead he stays in the safety and familiarity of his palace.  It seems to me this is Matthew’s way of expressing symbolically Herod’s unwillingness to embrace the spiritual journey.

This Sunday marks the beginning of the season of Epiphany.  “Epiphany”
means “to be manifest, to appear openly.”  The light of God has always been in the world in a veiled form, but with the coming of Christ that light is manifest clearly, openly.

This epiphany of this light compels us to ask, “How will I respond to this light?”

Herod’s response is to double down in the first quest of life – to use his life energies to preserve the place he has succeeded in carving out for himself.  It leads him to do horribly evil things to preserve what he has come to possess.  In the end, he is a sad, pathetic figure, wreaking havoc on the world.

It is important to note that the journey didn’t end for the Magi when they knelt down and worshiped the Christ-child.  They returned home, but now with the challenge of searching for the light they had seen so clearly in the child in the faces of everyone they met.  To see with new eyes, as Mother Teresa said, Jesus in all his many distressing disguises.

Too often Christianity has often been dominated by a language that suggests that Christians are people who have “arrived.”  We have been born again, we have been saved.

One of the helpful things John Wesley did was focus attention on the ongoing journey of “sanctification” that lies beyond the moment of “justification” – the moment when we experience the grace of God in our brokenness as forgiveness and a new birth.

What I would hope you would come away from this sermon is some encouragement to see your life primarily as a spiritual journey – that God is leading us on a journey that will inevitably have many twists and turns, valleys and mountaintops – in the process of which if we are willing to cooperate with God’s grace we will live more fully from our souls rather than our egos, following in the way of Jesus.  To see with the eyes of the soul rather than the ego that at the deepest level we are not all separate islands but we are connected by an eternal love that knits us all together.

One of the helpful things about seeing our lives this way is that when adversity and hard times come, we will be able to see it less like Herod – as a threat to the castle we’ve built up for ourselves – and more as some kind of opportunity on the spiritual journey.  To recognize, perhaps some way we’ve strayed from the path.  To see certain important things we’ve been missing with our nose to the grind stone.

One of my favorite writers is a woman named Rachel Naomi Remen who I was introduced to many years ago when Bob and Connie gave me a copy of one of her books for Christmas.

Rachel is a medical doctor who has faced chronic illness herself, and who has devoted the second half of her life (the time when the soul is more likely to awaken) to helping doctors and patients tune into the spiritual dimensions of healing.

She describes working with a talented oncologist who in midlife was burning out.  In spite of his great success, he was despairing as a result of all the deaths he encountered in his practice – deaths he could only see as failure.

Initially the doctor could only answer:  “Nothing, nothing, nothing.”  Rachel encouraged the doctor to try looking at his patients with the eyes of a novelist, or a journalist, or a poet – to try and pay attention to the stories behind these people he was treating primarily as nothing more than a body requiring his expertise.

He found himself noticing things he hadn’t paid attention to before.  For instance, he was treating a young mother who was fighting against a serious cancer.  One day he marveled at the loving attention in which she persisted in regard to her children in spite of sickness.  He found himself putting this into words to her, how much he admired what a good mother she was.  His words clearly moved the woman coming from her doctor.  He began to pay more attention to the question of where his patients found the strength and courage to persist in their quest for healing.

Ultimately such strength and courage arises from our souls.  It was one of the most remarkable things about Bob Keller – his persistent will to live in the face of the enormous health challenges he faced for so many years.