Dance, Then Wherever You May Be, I am the Lord of the Dance Said He 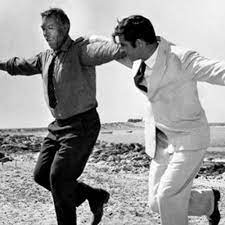 A sermon preached on March 28th, 2021 – Palm Sunday – and the first occasion in over a year that people were allowed back into the sanctuary for in-person worship.  The sermon was based upon Mark 11:1-11 and was entitled, “Dance, Then Wherever You May Be, I Am the Lord of the Dance Said He.”

You know the difference between a major and a minor key, right?  Barb, give us an example of a major chord.  Hear that?  It expresses joy.  Now Barb, let’s hear a minor chord?  Also beautiful, but hear the sense of tension and sadness.

If we were to make a sound track to the story of Jesus’ ministry as recorded in the Gospel of Mark, the first portion would be primarily major chords.  He began his ministry wandering about the countryside of Galilee declaring, “The Kingdom of God is at hand. Repent, and believe the good news!”

Now “repentance” might sound like a minor chord word, and sometimes it may some of that quality.  But the central meaning of repentance means is to change your mind — your way of seeing the world – to see life as God sees it, drenched with love and joy.  Jesus told parables – little stories that invited us to open our eyes and ears to perceived the kingdom of God breaking into this world in quiet, commonplace ways.

The Kingdom of God is the community where all are welcome, equally valued, equally cared for.  Everybody matters and nobody is more important than anybody else.  It’s a great party full of love and joy, waiting for us to enter, if only we can have the eyes to see it.

There is this old Paul Simon lyric that I have carried around with me for decades that expresses something of what the movement of repentance feels like:  “Did you ever have a moment of grace when your brain took a seat behind your face.”  The brain Simon is talking about here is here that little anxious, clutching self that constantly seeks to be in control, always putting itself in the middle of everything.  Did you ever have a moment when your brain in this sense just took a seat and allowed you to behold a world drenched in love and joy.  Paul Simon’s lyric continues, “and the world began the elephant dance.” There is a goofy, joyful dance taking place in all of creation and we are invited to partake. There is reason to laugh.

So I love the metaphor of the song we’ve been singing this morning, “Lord of the Dance.”  “Dance then wherever you may be.  I am the Lord of the dance said he” – “he” being Jesus.

So the first half of Mark’s Gospel is mostly filled with major chords, as Jesus wanders about the country side inviting people into the Kingdom Dance.  And a great many people seem quite willing to dance with him.  He heals the sick, sets the lame free to walk and praise God, he gives sight to the blind, he has dinner parties with those who have who’ve known primarily rejection.  In Jesus’ presence, people are coming alive, being made whole.

There are, however a couple of minor chord sections when Jesus encounters people who refuse his invitation to dance.  Basically, this happened with two groups of people.

Peculiarly, the people in Jesus’ home town refused to dance with him because they figured they already knew everything there was to know about Jesus having watched him grow up and their pride wouldn’t allow them to see him as someone who now possesses something wonderful to share with them. The little story of Jesus’ hometown visit ends with a minor chord as Mark notes that Jesus could do no great works of healing in Nazareth, “because of their unbelief.”

The other people Jesus encountered who refused to dance with him were the religious authorities.  They saw in him a threat to their authority, because they were a part of a system that said saw itself controlling who got to receive God’s blessings. They recognized that to dance with Jesus would mean letting go of their power and authority by which they Lorded it over other people and they couldn’t or wouldn’t do it.  Minor chord.

But Jesus kept on inviting people into the great dance of joy, with two amazing moments occurring when a spontaneous, joyous dinner party occurred out in the wilderness with thousands of poor, hungry people when Jesus offered up a few fish and loaves of bread and all were fed, and an abundance of caring and sharing took place, and people who had felt like strangers to one another suddenly felt like part of one big family of love. Major chord.

Halfway through the Gospel, minor chords begin to dominate the story.  Jesus begins to talk to his disciples about how he must go to Jerusalem and suffer and die.  He knows the religious authorities will not be able to let go of their status and power and their need to oppress the people.

And so today is Palm Sunday, the day when Jesus finally reached to Jerusalem.  A preacher has a choice to make in telling the story of Palm Sunday.  Does it involve primarily major chords or minor chords.  There are valid reasons for emphasizing either.

You can portray his entrance as major chords because Jesus was greeted by loud shouts of Hosanna by an enthusiastic crowd that welcomed him as their king.

And yet knowing how the story will turn out – that in just five days many of those shouting Hosanna will be shouting “Crucify him!” when they realize he isn’t going to be the warrior king they want him to be.

This day I choose the major chord emphasis.  There are two reasons for this.  The first is, after the year we’ve had, hell we need to take every opportunity we can find to rejoice.  But the second reason is that I think in some sense we are commanding in the story to rejoice.  Mark takes some care in telling us how Jesus arranged for there to be a young, baby donkey for him to ride into Jerusalem on that day.  In doing so, he was intentionally creating a piece of street theater that would consciously act out the fulfillment of a prophecy of Zechariah:

Rejoice greatly, O daughter Zion! Shout aloud, O daughter Jerusalem! Lo, your king comes to you; triumphant and victorious is he, humble and riding on a baby donkey.

Jesus truly is the king, even if he isn’t the king the people – and perhaps we ourselves – are looking for.  In his orchestrated street theater Jesus was consciously contrasting his entrance to that of Pilate, the Roman governor who would likely have also entered Jerusalem that same day with thousands of Roman soldiers riding not baby donkeys but mighty war horses.

I never quite thought of it this way, but I think maybe Jesus was being a bit clownish here.  I mean, who, if anybody rides on a baby donkey?  A child in a petting zoo perhaps.  The sight of a grown man riding a baby donkey must have looked a bit silly, inviting laughter from those with eyes to see.

In the week that follows Jesus’ entrance into Jerusalem all of the minor chord emotions will be experienced intensely.  Jesus will express anger at the injustice being perpetrated on the poor through the religious authorities and the system of oppression they operated.  He will feel abandonment, betrayal, grief, even despair.  It’s powerful because life includes all of these painful sorts of emotions and here is Jesus participating with all of them, entering fully into the life we know.

The prophecy of Zechariah that Jesus was acting out on Palm Sunday implies there is a choice we have in regard to joy.  “Rejoice greatly!” we are commanded.  We have some choice as to whether we are going to open our eyes to the joy mixed in with everything else.  We have a choice whether we will enter the dance.

There was this incredible movie made way back in 1964 entitled, “Zorba the Greek”.  It is about the friendship that develops between this up tight Englishman named Basil and Zorba, a man who in many ways seems like Basil’s total opposite.  In particular, Zorba has a talent that Basil is lacking in – a talent for joy.

Basil has inherited a piece of land with an old mine on the Island of Crete which is what brings him to Greece where he meets Zorba who convinces Basil he knows something about the operations of mines (which may have been a con job), and who persuades Basil to bring him along as his assistant. They travel together to the site of the mine, where upon inspection it appears getting the mine operational seems insurmountable, until Zorba comes up with an idea.  There are plenty of trees up on the top of the island’s mountain, and if they can build an elaborate zip line system to propel logs down to the shoreline where they can use them to rebuild the mine they’ll be in business (in theory.)

A lot of different things happen in the course of the movie as slowly over time the elaborate zip line system is constructed.  Interacting with the village community, much of what is experienced is extraordinarily painful in a manner similar to the pain of Holy Week. The movie doesn’t pretend that excruciating pain isn’t a part of life.

Finally, though the structure is complete.  With great fanfare the whole village gathers on the beach to witness the zip line in its inaugural employment.  Monks from the local monastery are there, a priest to bless the goings on.

Zorba fires a rifle and from high atop the mountain the first log is propelled down to the shoreline.  It’s kind of rough.  Then the second; it’s worse.  Finally with the third log, the entire zip line contraption coms crashing down.  The entire village flees, leaving Basil and Zorba alone on the beach, in apparent despair over what couldn’t have been more of a disaster for their business aspirations.

Then in the final scene of the movie, Basil surprises Zorba by quietly requesting, “Teach me to dance.” Quickly, Zorba embraces the idea enthusiastically, and in short order they are dancing arm in arm dancing and laughing.  (In our worship service, I showed the final scene, and at the end three eight year old triplet girls came up on the altar to join the dance.)

And so, Jesus invites us to dance. In spite of the disappointments and sorrows of this world, there is joy and love woven through life, if only we have eyes to see it.  God commands us to embrace the joy, even as it resides sometimes right next to heart breaking tears.