Matthew 3:13-17 — Embracing the Messiness of Both the Bible and of Life Itself 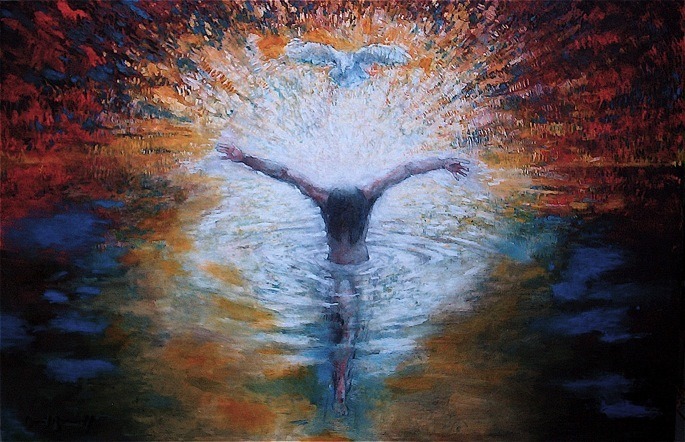 A sermon preached on January 11th, 2020 – The Baptism of Our Lord Sunday – based upon Matthew 3:13-17 entitled, “Embracing the Messiness of Both the Bible and of Life Itself.”

When folks read our scripture lesson in worship, I ask them to begin this way:  “Listen for the word of the Lord.” And then when they concluded, I ask them to say, “Thus ends the reading.  May God bless our hearing of the Word.”

We need that blessing from God to hear because it isn’t easy to hear God speak to us through the words of Scripture.

To some this might sound heretical but the Bible itself isn’t the actual Word of God. Every word of the Bible isn’t, as some Christians claim dictated from on high by God.  Rather, the Bible is a book if we listen attentively to with open minds and hearts, the guidance of the Holy Spirit will allow us to hear God speaking to us.

The truth of the matter is that the Bible is an inherently messy book. It is full of contradictions. It was written by imperfect people trying as best they could to express the truth as they knew it about God at their particular moment in time, immersed in a particular cultural context.  Often they assume their cultural assumptions were God ordained:  for instance, in Patriarchal societies people can easily assume God women to be subordinate to men.

Rather than truth handed down on high, what you find in the Bible is an ongoing conversation – sometimes a straight out argument – regarding peoples’ perceptions of the great mystery that is God.

One of the places you can see the messiness of the Bible is apparent is with the story we heard this morning — Jesus’ first recorded appearance as an adult.

It is an historical fact that before Jesus had gathered a following he appeared at the River Jordan where John had already gathered quite a following and that Jesus submitted himself to be dunked in River as a sign of repentance for sin.

First, it seemed to imply that Jesus was deferential to John.  Initially, Jesus may have been among John’s followers.  But secondly and more importantly, early Christians were troubled that the baptism was specifically for the repentance of sins with the implication being that Jesus in some sense viewed himself like all the others – as one more sinner in need of repentance – which seemed embarrassing to the church proclaiming Jesus as the Holy One sent from God to redeem the world.

Mark was the first Gospel writer and when he told the story it didn’t seem to bother him or the church of his time so he tells the story straight out, but he adds information that could only have been passed on by Jesus himself – which is that the experience was an intimate, personal spiritual experience for Jesus.

Twenty years later, however when Luke and Matthew told the story we notice changes.  Luke alludes to the baptism without specifically mentioning that it was performed by John.  And Matthew in the passage we heard this morning makes two changes:  First, the voice of God no longer says, “You are my beloved son,” now it says, “This is my beloved son,” as though Jesus had no need to receive such a message and that it was said for the benefit of the crowd.  And secondly, Matthew has John object to Jesus when he comes to be baptized, claiming that Jesus should be baptizing him instead.  Jesus’ response is that he is submitting to be baptized as though it were an act of righteousness – a pious act to fulfill the requirement of the Law.

And twenty years later when John wrote his Gospel, there is no mention of the baptism at all – only John the Baptist saying wonderful things about Jesus and how he saw the Holy Spirit descend upon him.

You get the feeling the three later Gospel writers would have preferred that the event never happened.

But there seems like there is something very critical to ponder here in Jesus’ first recorded adult act – a choice he makes that will be in keeping with the rest of his ministry.

Rather than stand above and apart, Jesus chooses to descend into the waters of the Jordan in solidarity with the rest of us broken, struggling human beings.  He’s in this thing called life with all of us.

For me, the question whether Jesus was a “sinner” is one that invites a lot of reflection.  I don’t think he was a sinner in the common use of the word – that is, someone who had committed some clearly evil acts for which he needed to repent.

But if Jesus were fully human – which is what the Church has always claimed he was, along with being fully God – then Jesus must have participated fully in the human condition which is to say he must have known what it felt like to stressed and anxious – to feel separated from others and from God.  He must have felt dark impulses that have the capacity to wreak havoc.  Otherwise, how could he identify with us?  He needed to share in the human experience to be an agent of redemption.

His choice to enter the waters in solidarity with the rest of the human race in the messiness that is life is one we will see him repeat throughout his ministry.  He is criticized by the Pharisees because of his willingness to keep intimate company with people who were labeled “sinners” – people who experienced most directly the brokenness that it is at the heart of human life.

In John’s account of the Last Supper, Jesus embarrasses Simon Peter when he gets down on his knees before each disciples to wash the grimey filth from their feet.

It is a wonderful thing to find God up on the mountaintop, but if we can’t find God down in the valley, then we have missed the Gospel of Jesus Christ.

There is an impulse we have to put God on a pedestal – the impulse that led the early church to be embarrassed by Jesus humbling himself by receiving John’s baptism for the repentance of sins.  Jesus died on a cross between two thieves – not between two gold plated candle sticks.

Jesus was about thirty when his ministry began which has led to a lot of speculation regarding what he did in those years that preceded his appearance at the River Jordan.

In those days there was a group called the “Essenes” who, mindful of the sinfulness of human life fled out into the wilderness to live in community in pursuit of holiness, living a highly disciplines, ascetic life.  It is only conjecture, but some scholars think perhaps Jesus spent time with the Essene community before concluding their path was a mistaken one. It is not by fleeing from this broken, sinful, messy world but rather by turning towards it with an open heart that God is found.

If Jesus did spend time with the Essenes, then perhaps his story mirrors something of the pattern of John Wesley’s life.  As a young man Wesley pursued holiness with a highly disciplined, “methodical” approach which led him to leave behind the corruptions of England in hope of finding a less corrupted world in the colony of Georgia.  But there his rigid, highly controlling personality encountered push back.  He also fell in love for the first time and ended up making a total mess of the relationship, getting his heartbroken leading him to do some rather hurtful things.  He fled Georgia after two years, having come face to face with his own inner sinfulness and brokenness.  He descended into darkness.  It was a year later that he experienced the grace of God flood his heart.  He recognized his solidarity with all human beings and before long he was leading a movement that reached out to the unholy people the church of his day had largely turned its back on.

I sit on the District Committee on Ordained Ministry and people who are on the path to ordination as well as local pastors who want to serve small local congregations meet with us to reflect on their journey.  This past week we met with a man who said that a turning point in his life involved an experience he had working with the Gideons.  Now I have a problem with the Gideons.  You have to be a man to belong for one thing, and traditionally you had to be a “professional” man as well.  No ditch diggers were allowed.  Their ministry involves handing out Bibles with the assumption that there was no messiness in the Bible and if common sinners would just read it, they would get their lives straightened out the way.  It strikes me as rather patronizing.

Anyway, this man met some good people in the Gideons and he describe his first outing with them to deliver Bibles to a hospital.  They arrived at the hospital and for some reason the others didn’t want to go up to the third flood – he thought it was maybe cause they were older and the steps were a challenge, so he volunteered.  Upon arriving on the third floor he was startled to discover that it was the Psych ward, and his initial response was terror.  He was thinking Jack Nicholson from “One Flew Over the Cukoo’s Nest” would appear any minute.  But as time passed he began to enjoy himself visiting the folks there.  His fellow Gideons downstairs were done within an hour but he stayed there for two and a half hours before they came to get him.  He said he was dancing with the patients, having a wonderful time.

When he drove home that day he felt as though it had been the best day of his life.

Later when he came to the conclusion that God wanted Gay and Lesbian people to be allowed to get married, the Gideons showed him the door.

To follow Jesus is to recognize that we are all in this together in this messy life, but God is here with us if we can just open our eyes.  We are not abandoned, and Jesus will lead us home.  We have the Bible, this messy book to lead us on this journey through this messy world, but that’s how it is with faith – it involves a willingness to embrace the messiness just like Jesus did, and in doing so to bear witness to the light that shines in the darkness.