Luke 14:1-14 — Escaping the Crippling Self-Consciousness through a Life-Style of Acts of Kindness 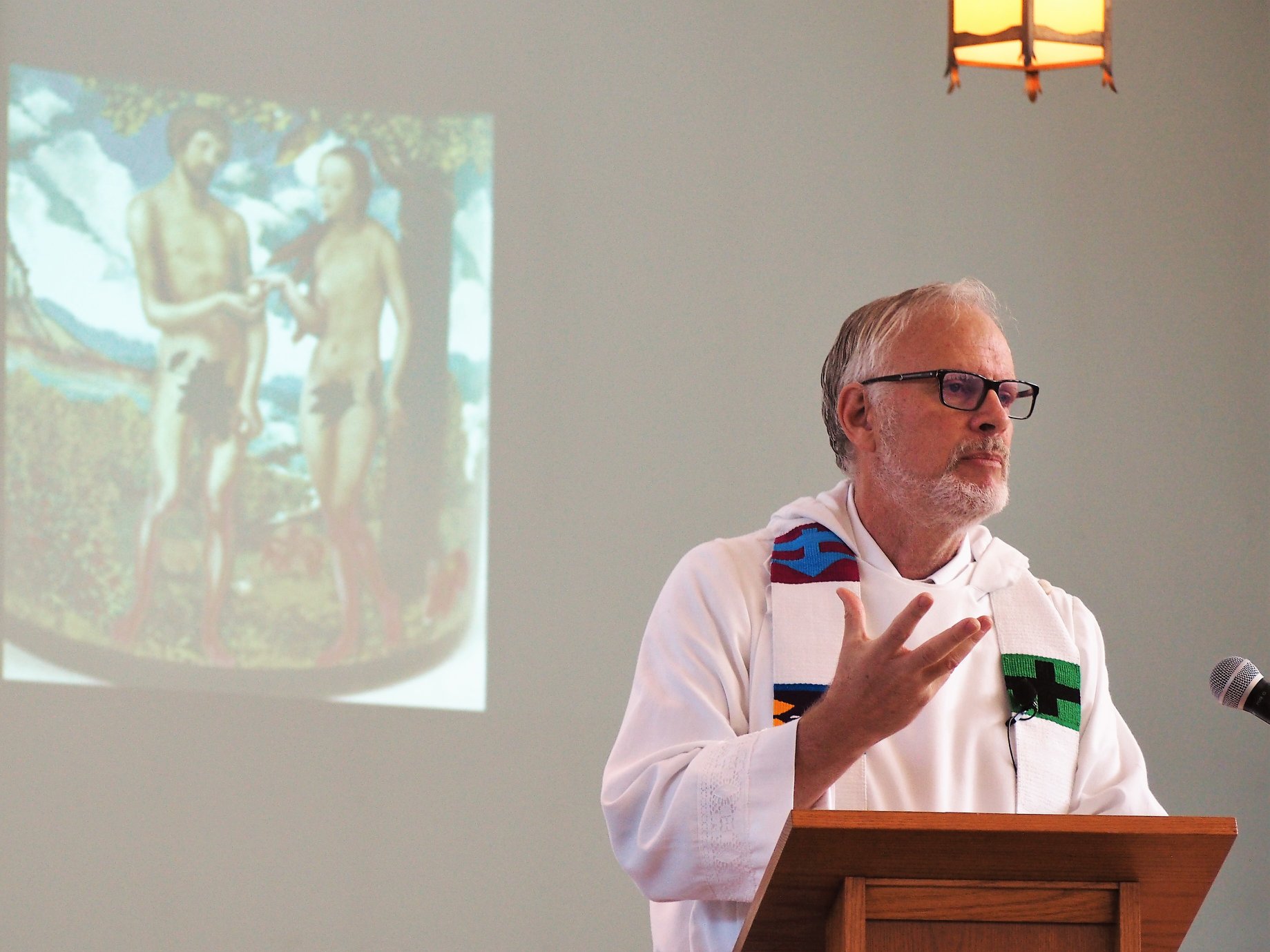 In the background of the story we just heard is the ancient tale of Adam and Eve and what is referred to as “the Fall from grace,” a depiction of the human condition that afflicts to some degree all of us once we leave behind the earliest of childhood.  The original couple find themselves burdened by the weight of a paralyzing self-consciousness.  In shame they cover their nakedness and hide from God.  To flee from self-condemnation they engage in accusatory finger-pointing; Adam accuses Eve and Eve accuses the serpent.

This same self-consciousness, shame and condemnation create an underlying tension at the dinner party hosted by a “leader of the Pharisees” at which Jesus is a guest.  Throughout the Gospels you get the impression that Jesus always loved a good party and was willing to accept an invitation from anybody, regardless of reputation.

But there didn’t seem to be much joy at this particular dinner party because nothing kills joy quite like a heavy dose of self-consciousness and a judgmental spirit.

We are told at the outset that the people at the “party” were watching Jesus closely, and not with open minds and hearts in regard to what he might teach them, but rather because there were scrutinizing him for something for which they could criticize him.

We heard last week in the story that immediately preceded today’s reading how on the Sabbath in the synagogue Jesus healed a woman who had bent-over for twelve years, evoking the anger of the leader of the synagogue who interpreted this act of mercy as a form of work that the laws governing the Sabbath prohibited.  And here again at this party the “righteous” people present are alert to see if he will do it again, which he does, healing a man suffering from the disease known as dropsy.  Strikingly Jesus sends the healed man away immediately seemingly fully aware that in present company he wouldn’t find much encouragement for celebrating the good fortune of his healing.

Luke proceeds to tell us, “When (Jesus) noticed how the guests chose the places of honor, he told them a parable.” Jesus sees how the people were obsessed with their reputations and the self-consciousness evoked by the question of where they ranked in the “good people club”.

To my ear, the so-called “parable” Jesus tells is really rather “tongue in cheek”, focusing attention on the peoples’ incredible self-preoccupation with status. He tells them to be careful not to overreach in their quest for seats of honor at the dinner party lest – God forbid – they find themselves humiliated (like Adam and Eve cast out of the Garden) by the host commanding them to give up a seat of which they aren’t worthy.

No, he says, when you get invited to a party, seek out the lowest place.

God, Jesus declares is at work in this work humbling the proud and raising up the humble.

Jesus proceeds to give advice for whom to invite when throwing a party. Don’t invite for status with an eye for those who can honor you with return invites – rather, he said invite “the poor, the crippled, the lame, and the blind.” Let the invitation be all about offering hospitality and love with no calculation about what you can get in return.

I think this is good advice when it comes to finding our way to getting free of that paralyzing self-consciousness that is our inheritance from Adam and Eve.

I read an article recently about a 29 year old man who lives in Pittsburg named Jon Potter.  Back in 2015 Jon was at a gas station filling his car when a woman approached and asked for a ride to a battered-women’s shelter.  He said no, and she walked away, and quickly he began to have a wave of regret.  Jon went looking for her but could not find her.  Feeling terrible, he vowed to be kinder to the next stranger who asked him for help.

A few weeks later someone on an online Pittsburg Reddit group asked if anyone could help installing a television antenna.  Jon is handy so he offered his help and did not charge her, and felt great about it.   Soon thereafter, someone else was looking for a cat sitter and Jon jumped to offer his services.

“It snowballed from there,” said Jon. “I decided that for the next year, if anyone asked me for help, as long as it’s legal and as long as it won’t harm anyone else, I’d do it. It sounds ridiculous, but I did it.”

Soon, he was committing near-daily acts of kindness in the Pittsburgh community: helping someone repair vinyl siding, moving furniture, fixing a leaky roof, changing a grandmother’s tire on the side of the road. All for free. He even raised $700 for a teen in his community who was injured while stopping a hate crime.

Jon’s one year of goodness was so fulfilling that he has continued on for the past three years helping hundreds – perhaps thousands – of strangers with random requests.

Though this was not his goal, before long Jon was attracting attention from his community.

“There is this Reddit lore about Jon,” said one friend he met along the way.   “There are all these legends of these cool things he’s done, and they’re true.”

You can find countless tributes to Jon on Riddit.  For instance, “About two years ago you bought me groceries during what was the de-facto darkest point in my life.  I’m sure I’ve gotten lost in the sea of good deeds you’ve done, but that little moment helped me bounce back in a big way.”

The decision to devote himself to helping others has had a profound effect on Jon.  He said that he struggled with depression and anxiety since he was 8 years old. Last year, Jon was diagnosed with high-functioning autism and said the realization was a “huge puzzle piece” in his life. He said that pushing himself to interact with people by helping them has given him new appreciation for others.

He describes himself as happier now, less depressed.  “I trust a lot more now than I did in the past,” he said. “I trust people’s intentions more.”

When asked whether some people might be scamming him – taking advantage of his kind heart, he answered, “Maybe.  But it doesn’t matter. It’s worth the risk of getting scammed, compared to the possibility of helping someone or saving somebody’s life,” says Jon.

He gives a recent example of a father who posted on Reddit that he was thinking of killing himself because he was going through a separation from his wife and he needed an immediate $2,000 to pay his bills.

Jon ended up going to the man’s house and lending him the money — the most he has ever lent out — and said the man was extremely grateful and is already starting to pay him back.

“It’s very sobering,” said Jon. “No one else was going to help this guy. In the past, I never would have said yes.”

Early in his kindness blitz, a young man posted on Reddit at 1 a.m. that he had lost his wallet, was stuck at a party and needed a ride home in the sweltering summer heat. Jon said other Reddit users were giving the guy a hard time, saying “find your own ride” and “who is going to give you a ride at 1 a.m.?”

“Everyone was bashing on him,” said Jon.  But Jon had a feeling about it. He put his Rottweiler in his car just in case he needed protection and picked up the young man. On the ride home, Jon ended up talking through some of the young man’s problems with him.

“He said he didn’t want to go to college — he just wanted to stay around town and sell drugs. I told him, ‘Maybe you don’t want to do that,’ ” Jon said. “We talked for 30 minutes about his doubts. He sent me a note later and said thank you.”

Jon upped the ante on his generosity last week, donating a kidney to a stranger after seeing on Reddit that a 57 year Pittsburgh father of two was in need of a transplant.  The doctors told Jon that he had to lose 20 pounds to undergo the surgery to remove his kidney, which he did.  Now he and the man are good friends.

Before Jon’s do-gooder lifestyle began four years ago, he was a paragliding flight instructor, and most of his work hours fell on weekends. He was generally free on weekdays and had what he described as a bare-bones lifestyle. Instead of trying to earn more money during the week, he made the decision to dedicate himself to helping others.

Two years ago, he formalized what he does by creating the website “Pittsburgh Good Deeds”, where people can ask for help and also volunteer their services. Potter now works as a handyman, and when he quotes his clients a price, he tells them to pay what they can. He said enough people pay the full price to keep him afloat. “I get what I need,” he said.

Jon said helping others has brought on a big turn for the better in his own life, especially by keeping his depression and anxiety at bay. He highly recommends his unusual lifestyle and likes encouraging others to help people when they can.

“Even me, with all these hindrances,” he said, referring to his autism and predilection towards anxiety. “If I can do it, you can too.”

In a little while we will share in a Gospel party – commonly known as Holy Communion.   We are invited to lay aside our self-consciousness – our judgment of ourselves and our judgment of others – and to humbly come to receive the gift of love that brings joy.

Having been blessed by the kindness of Jesus, we go forth to offer that same kindness to others and in doing so we catch glimpses of the original Garden harmony which is breaking into this world in the Kingdom of God.