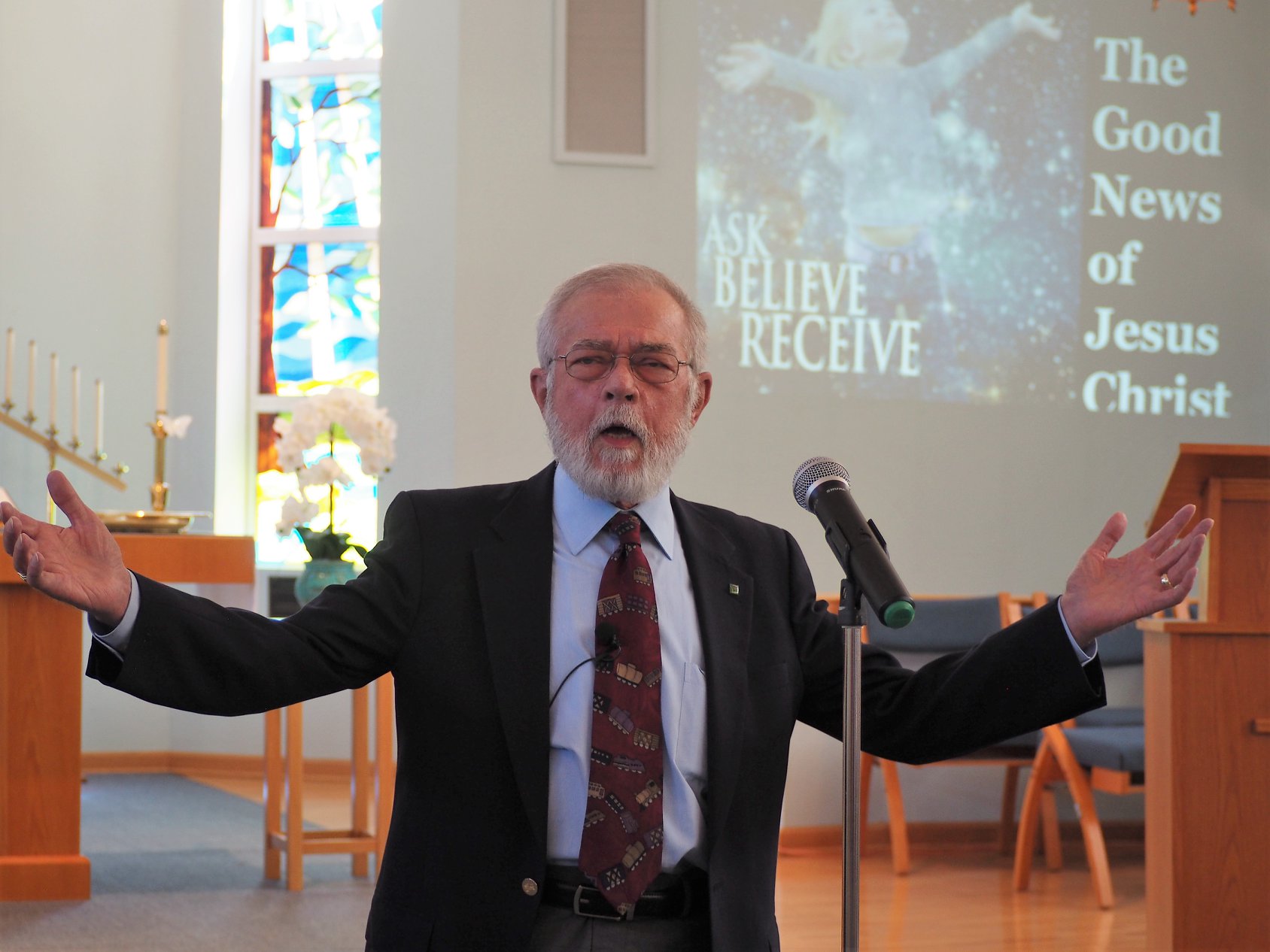 It could be said that faith, our Christian faith, is based on the book of Hebrews.  We don’t know for sure who wrote this letter but it was likely written to the Jewish Christians in either Palestine or Rome.

They were under severe persecution at the time and their faith was shaken to its very core.  This letter was to encourage them to hold on, to hold on to their faith.  Perhaps the strongest encouragement comes from the words from the scripture that Greg read for us this morning.

Let me ask you a couple questions.

How many of you know that it is supposed to be impossible for a plane to “ditch” in water and have all passengers survive?

How many of you know that prior to Capt. Sullenberger doing it, it is rumored to have only happened one time before, in Russia, in the early 1960s?

I just asked you some questions that maybe you knew the answers to. If I asked you if you ever heard of Sully, most of you probably would have recognized this name.  Maybe you would have remembered what happened on January 15, 2009.

On that January day in 2009, Capt. Sullenberger was pilot in command of US Airways Flight 1549 that took off from LaGuardia Airport. Shortly after takeoff, the plane struck a  flock of Canada geese and lost power in both engines.

Quickly determining he would be unable to reach any airport, Sullenberger piloted the plane to a water landing on the Hudson River. All aboard were rescued by nearby boats.

He was the last one to exit the plane after ensuring that all the passengers and his crew were safely out.

After the incident, and the following investigation, Sully became a national hero to everyone except himself. Although New York Mayor Michael Bloomberg dubbed him “Captain Cool” because of how calm he was in handling the crisis, Sullenberger suffered symptoms of post-traumatic stress disorder in subsequent weeks, including sleeplessness and flashbacks.

He said that the moments before the ditching were “the worst sickening, pit-of-your-stomach, falling-through-the-floor feeling” that he had ever experienced.

He also said: “One way of looking at this might be that for 42 years, I’ve been making small, regular deposits in this bank of experience, education and training. And on January 15, the balance was sufficient so that I could make a very large withdrawal.”

Capt. Sullenberger believed that he could land that plane on the Hudson River and he did!

I have flown many times and I will tell you that when the flight attendants began their safety briefings, I usually tuned them out because I had heard the message so many times.

If you’re like me you do the same.  You bury your nose in that SkyMall magazine and think of buying things that you know darn well are going to end up in the church garage sale next year.  I mean, who needs a corkscrew with a flashlight and a Swiss army knife attachment? But, hey, it’s shiny!

The exception was the part about the seat being used as a flotation device.  I wondered why they bothered to deliver that part of the message because everyone knew that planes cannot land on water without breaking apart. However, if it did happen and since there could be survivors who would need that seat cushion I listened just in case.

But keep in mind that I have seen many movies of planes crashing in water, tearing apart, sinking and almost everyone perishing. I had not seen one movie where this did not happen.

So when the flight attendants got to this part of their presentation my mind went to “you’re wasting your breath because planes do not land on water!” This is the movie that played through my mind for years up until January 15, 2009.

On January 15, 2009, I, along with the rest of the world, witnessed a plane landing on water without tearing apart and all of the passengers surviving. Seeing that on TV erased all of the movies I had seen of planes crashing in the water.

Before January 15, 2009 the movies in my mind showed that it was impossible for planes to land on water. However, I now have a new movie playing. The impossible became possible. In order to stop being confused and frustrated we have to change the movies that we are watching in our minds; the movies that contradict what God says in His word.

All of us have faced what we thought were impossible situations. We have had times when the movie playing through our minds showed us that it just could not be; that our situations were just impossible.

That’s kind of what happened to me 17 years ago.  I was on dialysis and, although dialysis is a viable alternative for many, it was not working for me.  I was losing weight.  I was constantly weak and tired. And I had this gray pallor.  The movie in my mind showed me dying because I knew I wouldn’t last the 3-5 years to receive a kidney transplant.

Then a dear friend stepped forward and offered to be a living donor.  Testing was done and she was a match.  A surgery date was scheduled and just before the surgery date it was discovered that she was pre-diabetic.  Transplant canceled.

My mind’s movie went right back to the scenes of me no longer being here.  My hope was dashed and my faith was shaken.

Then Connie stepped forward and said she thought we were the same blood type and that she wanted to get tested.  She matched.  Thanks to her gift of life, I’ve had 17 new and active years.  By the way, she wasn’t tested earlier because she knew she would be caring for me post-surgery and we had two young boys at home to think about.  That’s when the movie showed my mother coming to care for the boys and the members of this church and the Kiwanis Club stepping forward with everything from meals to doing yard work.  Life, with faith, can be a Hallmark movie!

Similar movies have played for other members of this church.  Maidie, Denise and Tim have survived cancer, and I’m sure there are others.  Hwa, in the quiet of Christmas Eve, got a liver transplant.  Look at how many babies have been brought safely into this world as answers to our prayers and our faith that God would do so.  And we know, because of our faith that Fred will be fine after his heart surgery on Thursday.

Paul, in his first letter to the Corinthians said: “Now three things remain; faith, hope and love, but the greatest of these is love.”

We’ve got the love part down pat!  Observe the hugging and smiles that go on when we pass the peace.  Never in the more than 20 years that Connie and I have been members here have I ever heard anyone say, “Sorry to see you here. God’s peace be with you.”

No, we love one another.  We welcome ALL of God’s children.  And as we do, we should remember to encourage one another in faith and hope.

That’s what I’m about to ask you to do today.  You may have heard Pastor Jeff name me in prayer for my kidney and lung situation.  My situation is similar to what I went though 17 years ago,

Some three years ago, my kidney function began to falter and it was suggested that I get on the transplant list.  Remember, in New Jersey it can take 3-5 years to find a suitable donor.

I was on the “Status 7” list which means I was not on the active waiting list, but I was accumulating time and points for the time when a transplant was needed.

This past year I attempted to move to the active list.  I was turned down at St Barnabas because of the shape my lungs are in.  They feared they wouldn’t be able to get me off the ventilator following kidney surgery.

It was suggested that I try Temple University Hospital in Philadelphia where they are more familiar with high risk cases such as mine.

Meanwhile, I met with my lung doctor to discuss ways to improve my lung function and the topic of lung transplant came up.  Her suggestion was Temple University Hospital!

While my lungs aren’t currently bad enough to be considered for a transplant, it was suggested that I visit Temple’s kidney doctors for an evaluation.

Enter the cardiologist.  He’s the guy that has to clear my heart as being able to handle surgery.  He can’t do that without a cardiac catherization.  Cardiac caths require the use of contrast and contrast, particularly to a compromised kidney, can be damaging.  In fact, in my case, it could completely shut down the kidney.

This would mean dialysis.  It’s not likely that I could survive dialysis for very long since I didn’t tolerate it that well when I was 17 years younger.

So there’s my predicament.  There’s why the prayers for discernment on which way to go.  It’s not very comforting when I ask the various doctors for direction and they simply shrug.

But God knows what I should do.  I believe that.  I have to sit back and let God drive the bus, as Connie says.  And that’s where you come in.  Keep me, and anyone else who asks for help in your prayers.  We have seen the evidence of answered prayer.

“Now faith is being sure of what we hope for and certain of what we do not see.”

We have watched all of the movies of impossibility.  Now let’s all focus on the impossible become possible, not just because of what you read in the Bible or what you hear in church, but because the Holy Spirit will reveal it to your Spirit through you faith if you are listening.

This is your “now” moment to believe that what isn’t can be and what seems to be does not have to be.

This is your “now” moment to change the movie script that you have been watching all your life.

Remember what we read in Hebrews 11:1? It says, “Now faith is the substance of things hoped for, the evidence of things not seen.”

If we walk only by what we can see we will never imagine something different. It does not matter what you are faced with today, imagine the possible. In Matthew 19 Jesus said,  “…..With people this is impossible, but with God all things are possible.”

When in doubt, pause

And when you pause, pray.

And when you pause, pray.  Prayer is bringing your wishes and worries to God;  faith is leaving them there.