Romans 5:1-5 — Finding the Hope that Does Not Disappoint 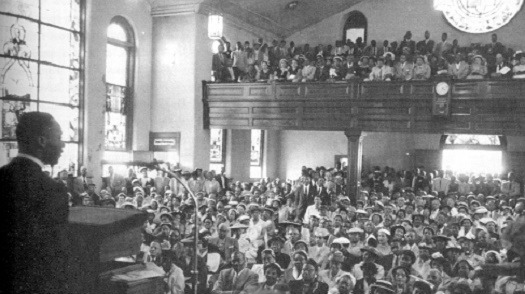 A sermon preached on June 14th, 2020 based upon Romans 5:1-5 entitled, “Finding the Hope that Does Not Disappoint.”

For the Apostle Paul the figure of Abraham (and presumably his wife Sarah if he could have gotten past his patriarchal bias) was a big deal. The entire chapter leading up to this morning’s reading was devoted to Abraham.  Paul lifts him up as the original example of what it means to have faith, trusting the promises of God.

And yet their faith wasn’t the unshakeable rock Paul might lead us to imagine.  Sarah was already old when God first promised to Abraham that his barren wife would give birth to a child, and it would take another 25 years before that promise was fulfilled.  25 years is a long time to wait — to keep trusting, keep hoping.  If we took the time to review their story, we would find they were far from perfect, either in their actions or their trust.  Sometimes they got truly discouraged.

Abraham and Sarah needed little nudges from God to encourage their faith. For instance, there was that night Abraham was having his doubts about God’s faithfulness, leading God to take him out under the night sky. Look up, God said, and count on the stars if you can, for such is the number of the descendants that will come forth from Sarah’s womb.

And there was that time Sarah was losing confidence that God would indeed come through for her and she tried taking matters into her own hand, hatching this crazy plan to have her husband Abraham sleep with their slave girl Hager to produce a son, and Abraham, in a show of his own faithfulness went along with the plan.  What gives with that?

So Sarah needed that little visitation we heard about in the children’s sermon in which strangers visited their ten in the heat of the day, and Abraham and Sarah showed compassion on their need offering them hospitality, shade to rest in, water to drink and bathe with, and a good home cooked meal.  One of their guests – an angel in disguise? – gave Sarah’s faith a little boost with his encouraging words about the up coming birth of a son – a renewed trust expressed in Sarah’s spontaneous burst of laughter.

So Paul’s sterling examples of faith weren’t so different from you and me.  We too can struggle with doubts, with discouragement, with a lack of trust in the promises of God, particularly perhaps in a time like this.

Listen for the word of the Lord as it comes to us from the fifth chapter of Paul’s letter to the Romans:

Therefore, since we are justified by faith, we have peace with God through our Lord Jesus Christ, 2through whom we have obtained access to this grace in which we stand; and we boast in our hope of sharing the glory of God.

Bear with me as I talk briefly about two technical terms in Christian theology – after all, I need to have something to show for the three years I spent in seminary, right?

The first is “justification” – which means being made right with God.  Paul says we are “justified by faith.”

This is Paul’s big thing: we don’t make ourselves right with God — we are made right solely by the grace of God which we receive through faith, the discovery that, too our amazement God loves us unconditionally, wretched though we may sometimes seem to ourselves.  We aren’t justified because we’ve figured out how to live in perfect in harmony with God’s will. Abraham and Sarah surely hadn’t. An loving relationship opens up to us in justification, but this doesn’t mean we cease to be broken, fallible sinful human beings with a habit of really screwing things up.

The second theological term is “sanctification.”

God loves us even when we our lives are a mess but God doesn’t intend to leave us in that mess.  God intends to transform us, and sanctification is the ongoing process in our relationship with God by which God’s grace works within us to make us more Christ-like.  This word doesn’t show up in the rest of our reading, but sanctification is what Paul is talking about here:

And not only that, but we also boast in our sufferings, knowing that suffering produces endurance, 4and endurance produces character, and character produces hope, 5and hope does not disappoint us, because God’s love has been poured into our hearts through the Holy Spirit that has been given to us. (Romans 5:1-5)

“We boast in our sufferings” — a strange turn of phrase for sure.  It almost sounds masochistic — like somebody going out looking for pain.

But that’s not what he means.

Suffering comes to all of us.  Behind the smiling faces, if you dig deeply enough, there is a story that includes times of great suffering. That’s what the saying means:  “Be kind to everyone you meet, because everyone is fighting a great battle.”

We don’t need to go looking for suffering, suffering will find us.

And sometimes suffering comes to us as a result of trying to follow Jesus.

Paul talks about boasting in suffering because there is an opportunity if we recognize it to make progress in the sanctification process when suffering comes to us.  Suffering can clarify what matters in life and what doesn’t.  Suffering provides the opportunity to learn how to love like Jesus – to love when loving isn’t easy.

Paul give us what almost sounds like an equation:  Suffering produces endurance which produces character (side note:  if you are looking for a leader, make sure they’ve passed through some times of deep suffering in their lives) and in the end this whole process produces “hope” – a hope that does not disappoint us.

Which implies there is more than one kind of hope.

But Christian hope is rooted in a deeper place – in God’s goodness and the ultimate triumph of love.

Consider Jesus.  He began his ministry proclaiming that “the kingdom of God is at hand.”  God’s kingdom is the place where there is only love and no hate or fear and everybody is cherished.  Now on the surface it might sound like Jesus was saying, “Listen up, everybody.  In just a little bit God is going to make everything right!”

But Jesus wasn’t the least bit naïve.  When he told his disciples they were headed to Jerusalem he was under no illusion that when he got there everything would turn out hunky dory and that the religious authorities and the Roman authorities were going to give up their power and stop oppressing the people and sing “Coomb By Ya, My Lord” with Jesus around a campfire.

No, he said quite clearly, they were going to torture and kill him.

His hope came from his knowledge that on the far side of the cross there was resurrection, but you have to go through the cross to get there.

He knew there is this other, invisible realm in which love already prevails – we call it heaven – and it is always closer than we know – and sometimes it touches down here on earth.

And God cares about this world and wants us to do what we can to help Heaven touch down on earth.

But we know the forces fighting against God’s kingdom are very strong, and we can’t make the Kingdom come by force of will.  We have to trust God to be at work in this world in ways we can’t begin to understand.

So we are living in a time when certain forms of suffering are on the rise.  There is the suffering caused by the pandemic, which if it doesn’t personally threaten our lives and those of our loves one, it surely tries our patience with the ongoing isolation we endure.  And there is the suffering of our broken society, with the conflict and violence and racial injustice expressed in so many different forms.

It’s disturbing, but it is also a time of opportunity to get in touch with that deeper hope and an opportunity to become — with God’s help —  a little bit more like Jesus.

Elsewhere Paul describes another component of the grace revealed in Christ: “There is neither Jew nor Greek, slave nor free, male nor female, for we are all one in Christ Jesus.” (Galatians 3:28)

Paul saw in Christ that all the ways we divide people up and view some as more valuable than others is ultimately a great lie, and that we need to do what we can to expose the lie, but even Paul had a hard time fully living this truth out, especially in relation to his seeming acceptance of the domination of women by men.

Since we aren’t fully sanctified, the great lie continues to live inside of each us in various ways.  As Jesus said, we should be careful about focusing on the speck in our neighbor’s eye if we haven’t recognized the ways the lies continue to cloud our own vision.

In this present moment of history, we are being challenged to examine the lie that divides white people and black people, and the injustices black people have suffered as a result of this lie.

The Civil Rights Movement of the fifties and the sixties that was associated with the leadership of Martin Luther King, Jr. was deeply rooted in the Christian faith, particularly the faith that of the Black church expressed in the rich tradition of Gospel songs that arose from the experience of slavery.

When white folk would come down from the north to the deep south to lend a hand to the movement for a few months, sometimes they’d get a little frustrated with all the time the Black folk wanted to spend in church services, singing and clapping, sometimes weeping, sometimes laughing.

“Come on”, the white folk from the north would think to themselves, even if they didn’t say it.  “Let’s focus on the work of organizing the movement.  Let’s get this done!”

But the black folk knew better than the white folk from the north that racism wasn’t going to suddenly disappear just because they got themselves organized.  No, the sin of racism is too deeply entrenched for that.

They knew the journey was going to be a long one and they knew they needed all that singing and praising to sustain them for what lay before them.

They needed to daily come in contact with heaven.  They needed to laugh like barren Sarah at the news that she was in fact one day going to have a baby.  They needed to sing, “Free at last, free at last, thank God we are free at last!” to claim the freedom that was their birthright as the Apostle Paul said as God’s children even as the world around them would deny them their freedom as citizens of this nation.

In their suffering, they found the strength to endure, to draw closer to Jesus, and find a hope that would not disappoint them.