Friday, April 5 — The Fragrance of Grace in the Face of Death 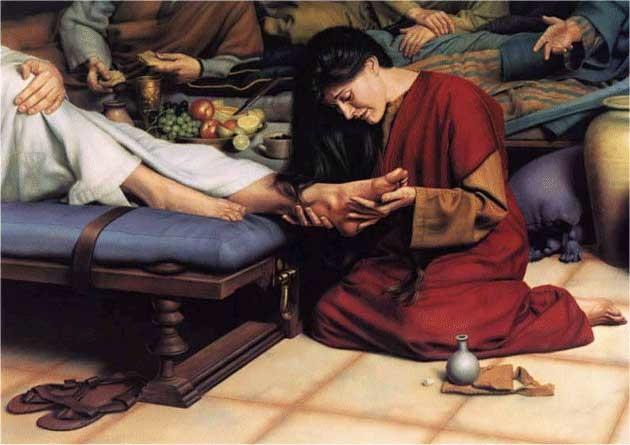 Friday, April 5 — The Fragrance of Grace in the Face of Death

We stray from Luke’s Gospel this week to a story from John’s Gospel which we will take two days to cover.  Immediately before today’s reading we hear the famous story in chapter 11 of Jesus coming to the grief-stricken home of Mary and Martha where their brother Lazarus has died.  Jesus calls Lazarus out of the tomb and back to life.  The chapter ends with the religious authorities greatly disturbed by the fact that because of this miracle the people are flocking to Jesus.   They are determined to find a way to have him killed.

At some point not long after this Jesus is at a dinner party at the home of the two sisters and Lazarus – a family with whom Jesus seems to have had a particularly warm friendship.  Their home is in Bethany, not far from Jerusalem.  In John’s Gospel Jesus dies on Passover.  Hence the story we are about to read takes place just six days before Jesus’ death.  The day after this dinner party, Jesus will enter Jerusalem for Palm Sunday.

John 12:1-3
Six days before the Passover Jesus came to Bethany, the home of Lazarus, whom he had raised from the dead.
There they gave a dinner for him. Martha served, and Lazarus was one of those at the table with him.
Mary took a pound of costly perfume made of pure nard, anointed Jesus’ feet, and wiped them with her hair. The house was filled with the fragrance of the perfume.

References to the sense of smell are relatively few in the Bible, but strikingly we hear two in quick succession.  At the tomb of Lazarus when Jesus commands that the stone be rolled away, Martha objects:  “By this time there is a bad odor, for he has been there four days.” Here now in the home of the three siblings Mary’s act of anointing Jesus’ feet brings this about: “The house was filled with the fragrance of the perfume.”

Death and life are in close proximity to one another.  Where Lazarus just came out of a tomb, in short order Jesus’ lifeless body will be placed in a tomb. Mary anoints Jesus in preparation for his death, as a corpse would be anointed for burial.

The setting is a dinner party among friends, perhaps with an expectation that the mood will be kept light-hearted.  It would make sense, however that Jesus would be heavy hearted in the knowledge that soon he will die. Mary – the same Mary who in the story we considered last week sat at the feet of Jesus listening intently – seems uniquely tuned into Jesus.  Sensing that “the elephant in the room” must be acknowledged, her spontaneous anointing brings the reality of Jesus’ impending death out into the open.   The super expensive ointment with the fragrance that fills the room expresses powerfully God’s extravagant, over-the-top grace, not unlike the sign Jesus himself performed in John 2 when he turned six huge clay jars full of water into the very best tasting wine so a wedding feast could go on.

In this case, Jesus himself is the beneficiary of this extraordinary expression of love.

The actual meaning of “messiah” is “the anointed one.”  (We remember how at his hometown in Luke’s Gospel Jesus reads from the scroll of Isaiah a passage that begins, “The Spirit of the Lord is upon me, for he has anointed me…”)  Throughout the Old Testament, and throughout most of history, anointing has been done by powerful men anointing other powerful men.  Popes, for instance used to anoint emperors.

In this case, however a woman – a second class citizen in those days and sometimes in these days as well – and one without any official title, is led by the Holy Spirit to take it upon herself to anoint the anointed one.

There is a message here of God inspiring ordinary people with no worldly status to do surprising things that bear witness to an extraordinary grace that meets us in the valley of the shadow of death.

What surprising expression of grace might God be calling you to perform?

Are there elephants in the rooms in which you live that need to be named so healing and reconciliation can take place?