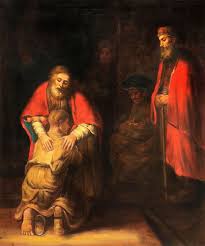 One of the things that makes me so enamored with Jesus is that he could come up with this little story he told two thousand years that is so endlessly thought-provoking that in the course of listening to it for well over forty years I keep hearing new things in it.   If you take the time to climb inside the story there are so many different possible questions to explore – for me, it can be a little overwhelming, with the potential for me to preach a way too long sermon.

Depending on what mood you’re in, or on which character with which you find yourself identifying, the story can be either absolutely infuriating or deeply comforting, or possibly both.  With just a few words, Jesus captures subtleties of family relationships throughout human history. Part of what is so fascinating is all that Jesus left unsaid, inviting us to ask questions and use our imagination.

For instance, what was the relationship of the brothers like when they were growing up?  What exactly was on the younger brother’s mind when he set out on his adventure?  Was there any part of him that was afraid? Was the father always so merciful, or were there things that happened that brought him to this place where he could forgive all? I want to know more about the elder brother’s relationship to his father:  Did he recognize the ache his father carried all those years for the son who had left, and if so, how did he feel about it?

Jesus ends the story with the father’s words hanging there in the air, leaving us to wonder whether the elder brother ever accepted his father’s invitation to come into the party.

So, here is where I chose to focus on this morning:  that glorious party being thrown in the Father’s house. Jesus says there was music, dancing and the fatted calf they’d been saving got served up for dinner.  It must have been like the best party ever.  So much joy and love and laughter.

In relation to this party, the first question is:  How does one get into the party?

Clearly, the invitation isn’t earned.  It comes as pure gift.  Grace is the word we use in the church.

The succinct little summary of the Gospel message that Paul gave us in our first reading tells us that God has thrown open the door to the party. That’s what Paul means when he writes, “In Christ God reconciled the world to Himself.”  The invitation is extended to the whole world.

The second question is:  where is this party taking place?

In its purest form, this party is that reality we refer to as “heaven”.  People who have been blessed with a glimpse of heaven say that it isn’t fluffy clouds and ethereal spirits floating about with angel wings.  No, it’s solid.  It’s real.  In some mysterious sense they say it is more real than this world is.  It’s… the ultimate truth.

So here is what I believe from reading the Bible and from what those people who have glimpsed heaven have told us:  When we die, the door to heaven will stand wide open with pure love waiting for us on the other side of the door.

You won’t be required to have lived a “good enough” life.  If you did well, we’d have a problem.  I mean where exactly would the line be drawn between “good enough” and “not good enough”?  And how would you ever know if you had done enough to cross the line into “good enough”?

So the third question is: what is this contraband stuff?

But mostly I want to talk about other kinds of “stuff” – the things we form our identities around.

Some of this stuff is called resentment or hatred.  It can seem that if we let our precious resentment and hatred go, something central to who we are will be lost.

It can include what you could call “pride” – the kind of pride that leads a person to feel superior to other people.  Some of this pride can be associated with the particular tribe we’ve identified ourselves with – our belief that our tribe is superior to all other tribes.

But there is other stuff we can have a hard time letting go of in order to enter the great party that seems to be of a quite different nature, and here I’m talking about things like guilt and shame.  I say “seems to be”  because here also pride can be involved — a peculiar kind of pride that gets  attached to our guilt and shame – the pride that says I’m the only one who gets to judge whether I deserve to go to the great party – and ain’t nobody gunna overturn my verdict that I’m not worthy.

So, perhaps the contraband stuff I’ve been talking has called to mind things that take place in Jesus’ little story.

The stuff the younger son has to let go of to enter the party is his guilt and shame — the judgment he reached when he made a total mess of his life that he was no longer worthy to be called his Father’s son. In this instance, the son apparently manages to let go of his guilt and shame because he finds his Father’s love – the amazing grace of his father — so very compelling.

But the elder son can’t seem to let go of his stuff.  The elder brother’s stuff seems a little more complicated.

Actual material stuff is part of it.  The story involves, after all the inheritance that comes to the sons:  the money, the land, that fatted calf, the fancy drinking goblets that have been passed down through the family for generations.  By the law of the land all this stuff now belongs to the elder brother when his father passes.  The younger brother has already squandered away what he had coming to him. So, what’s left is now all earmarked for the elder brother, and – can you believe it?  Some of his stuff is now getting wasted on this lavish party his Father is throwing to celebrate that the brat has finally come home!

Of course, the material stuff is related to the other stuff the older brother has to let go of if he’s going to enter the party: his resentment, his anger, his hatred, and his vast sense of superiority to the brat that is so central to his identity.

At the end of the parable, all this stuff seems way too precious to the elder son to let go of to enter the party.  What he may yet do remains to be seen.

So, the story points to a real conundrum.  Clearly, the elder brother has done a vastly better job living what we would generally agree is a “good life”.  Make no mistake, you and I were put on this earth by God to live a “good life” – that is to live with loyalty, responsibility and justice and especially with love.

The thing is, human nature is such that we can’t help but take pride in our efforts on this count.  We get quite attached to the identity of being a “good person” as opposed to the “bad people” in this world – and this pride – this attachment to the “good person” identity is hard to let go of and has the potential of blocking our heart’s capacity to love and hold us back from entering the great party.  The story even suggests that this kind of stuff is a bigger barrier to entering the party than the one presented by the guilt and shame of the person who has failed so miserably in the “good life” measure.

Perhaps there was something else the elder brother was clinging to as well, and that was fear.  I’m talking about the fear that if he doesn’t get up tomorrow and the next day and every day after that and do the hard work of keeping the farm running he will no longer be worthy to be called his Father’s “son.” It’s the fear that arises from the belief that he is what he accomplishes and if he fails to accomplish stuff – well, then he won’t be anything. (It’s a fear a person can have approaching retirement.)

Can the elder brother let go and trust his father when he tells him that no matter what, he always will be a treasured, beloved son and that everything he owns already is his?

Okay, so I said that the party in its purest form is the reality that awaits us beyond death which we call heaven, but if Christianity is reduced to merely the question of entrance into heaven, it becomes terribly distorted.  Jesus consistently taught that the Kingdom of God – that reality we call “heaven” — can be encountered right here, right now.  It’s what Paul was getting at when he said that “if anyone is in Christ, there is a new creation:  everything has passed away; see, everything has become new!”

In Christ, the door stands wide open right here, right now to a whole new life, a brand new beginning. It is possible to live something of heaven’s life right here on earth.  Not perfectly or completely, of course – far from it – but in a very real way nonetheless.  This “new creation” happens when we embrace an identity as God’s beloved child, claiming this identity as the one that takes precedence over all the identities we create for ourselves.

There is a freedom that comes with claiming our birthright as God’s beloved child, what Paul calls in Romans 8 “the glorious liberty of the children of God.”  It is the freedom to stop clutching the stuff that seems so very important but which in the big picture, really isn’t very important at all.

So, on this Lenten journey it’s important to recognize and name the “stuff” that we find hard to let go of.  What’s your stuff?  Is it guilt and shame?  Is it money and material possessions? Is it pride?  Is it resentment and anger? Is it the fear of being unlovable?

Here’s what happens when we begin to let go of our tight grip on this stuff – we discover a joy and love that was always there waiting for us in the present but which we’d somehow overlooked because we were too preoccupied with clutching. And as we do, we will find ourselves naturally living as what Paul called “ambassadors of Christ” naturally engaged in the ministry of reconciliation.

Psychologist talk about how the people who are best able to be peacemakers who help resolve conflicts are those who can be what they call a “non-anxious” presence in the midst of the conflict. If we aren’t focused on clutching and defending our turf – we can listen calmly without feeling defensive – and we can be present in the midst of conflict in a way that brings down the levels of the anxiety and hostility that are keeping people apart. Walls begin to come down.  People discover they can let old wounds go.  We live out the new creation Christ has brought about and invite others to join us in the great party.