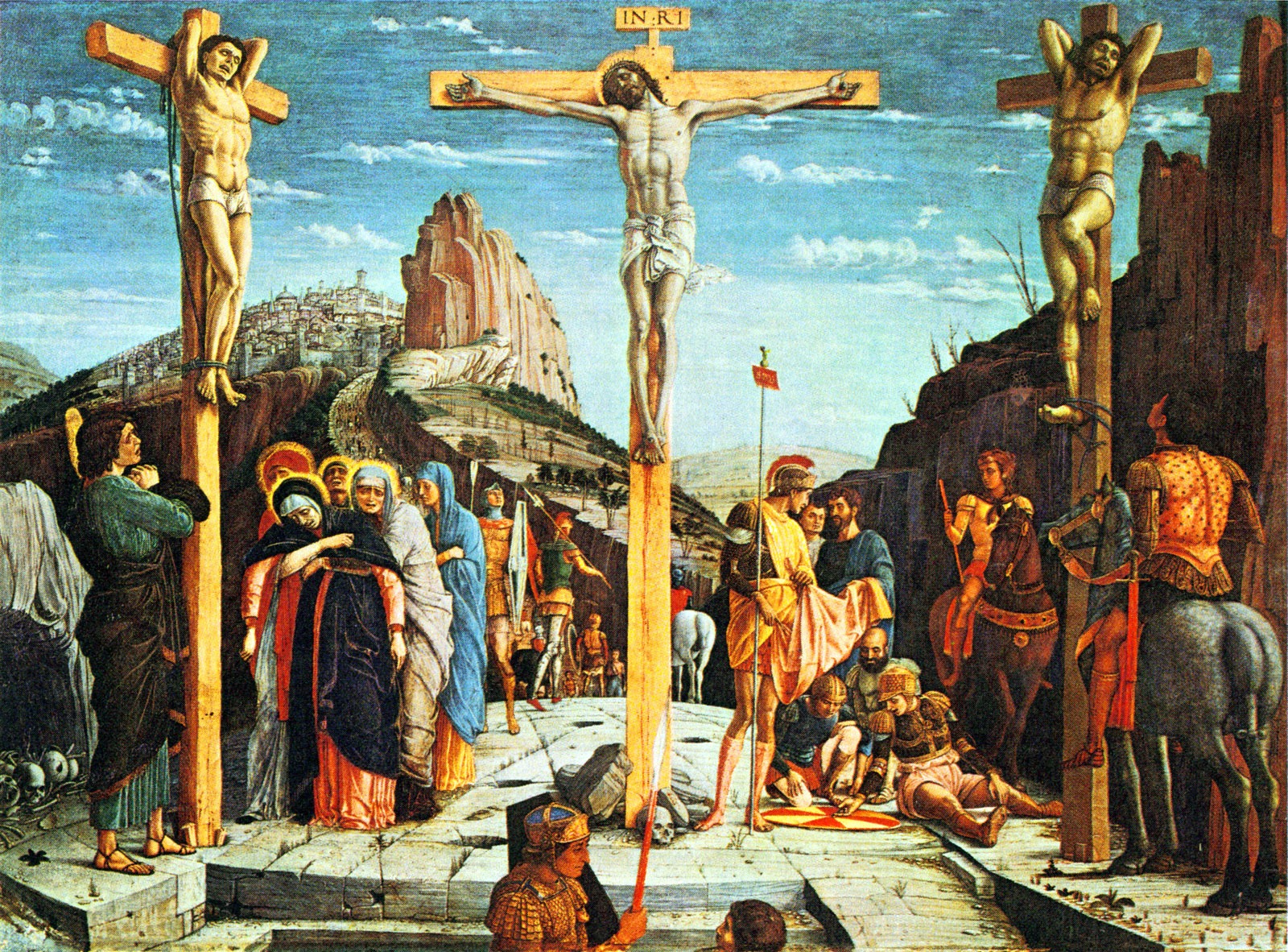 When morning comes, Jesus is interrogated by the Jewish leadership council known as the Sanhedrin.

When day came, the assembly of the elders of the people, both chief priests and scribes, gathered together, and they brought Jesus to their council. They said, ‘If you are the Messiah, tell us.’ He replied, ‘If I tell you, you will not believe; and if I question you, you will not answer. But from now on the Son of Man will be seated at the right hand of the power of God.’ All of them asked, ‘Are you, then, the Son of God?’ He said to them, ‘You say that I am.’ Then they said, ‘What further testimony do we need? We have heard it ourselves from his own lips!’

Next Jesus is questioned by Pilate, the Roman governor who ruled over Judea and Samaria, the southern portion of Palestine. The charges brought against him are false.

Then the assembly rose as a body and brought Jesus before Pilate. They began to accuse him, saying, ‘We found this man perverting our nation, forbidding us to pay taxes to the emperor, and saying that he himself is the Messiah, a king.’ Then Pilate asked him, ‘Are you the king of the Jews?’ He answered, ‘You say so.’ Then Pilate said to the chief priests and the crowds, ‘I find no basis for an accusation against this man.’ But they were insistent and said, ‘He stirs up the people by teaching throughout all Judea, from Galilee where he began even to this place.’

Pilate is happy to pass the buck to Herod Antipas who rules over the northern region that included Galilee where Jesus is from. Unlike Pilate, Herod is a Jew who rules at the discretion of Rome.  It is Herod who has earlier executed John.  He is in Jerusalem for the Passover festival.

When Pilate heard this, he asked whether the man was a Galilean. And when he learned that he was under Herod’s jurisdiction, he sent him off to Herod, who was himself in Jerusalem at that time. When Herod saw Jesus, he was very glad, for he had been wanting to see him for a long time, because he had heard about him and was hoping to see him perform some sign. He questioned him at some length, but Jesus gave him no answer. The chief priests and the scribes stood by, vehemently accusing him. Even Herod with his soldiers treated him with contempt and mocked him; then he put an elegant robe on him, and sent him back to Pilate. That same day Herod and Pilate became friends with each other; before this they had been enemies.

Pilate then called together the chief priests, the leaders, and the people, and said to them, ‘You brought me this man as one who was perverting the people; and here I have examined him in your presence and have not found this man guilty of any of your charges against him. Neither has Herod, for he sent him back to us. Indeed, he has done nothing to deserve death. I will therefore have him flogged and release him.’

Luke does not explain what the Gospel writer Mark does, which is that there was a tradition of the Roman governor to release a prisoner at Passover to appease the masses.

Then they all shouted out together, ‘Away with this fellow! Release Barabbas for us!’ (This was a man who had been put in prison for an insurrection that had taken place in the city, and for murder.) Pilate, wanting to release Jesus, addressed them again; but they kept shouting, ‘Crucify, crucify him!’ A third time he said to them, ‘Why, what evil has he done? I have found in him no ground for the sentence of death; I will therefore have him flogged and then release him.’ But they kept urgently demanding with loud shouts that he should be crucified; and their voices prevailed. So Pilate gave his verdict that their demand should be granted. He released the man they asked for, the one who had been put in prison for insurrection and murder, and he handed Jesus over as they wished.

As they led him away, they seized a man, Simon of Cyrene, who was coming from the country, and they laid the cross on him, and made him carry it behind Jesus. A great number of the people followed him, and among them were women who were beating their breasts and wailing for him. But Jesus turned to them and said, ‘Daughters of Jerusalem, do not weep for me, but weep for yourselves and for your children. For the days are surely coming when they will say, “Blessed are the barren, and the wombs that never bore, and the breasts that never nursed.” Then they will begin to say to the mountains, “Fall on us”; and to the hills, “Cover us.” For if they do this when the wood is green, what will happen when it is dry?’

Once more the destruction of Jerusalem in 70 AD is referenced.  Usually it was considered to be a curse for a woman to be barren.  Jesus is saying that because the times that are coming will be so destructive and disturbing, it will be a blessing to be barren.

Two others also, who were criminals, were led away to be put to death with him. When they came to the place that is called The Skull, they crucified Jesus there with the criminals, one on his right and one on his left.  Then Jesus said, ‘Father, forgive them; for they do not know what they are doing.’

Throughout Luke’s Gospel Jesus is often portrayed as praying.  Here now hanging on the cross he continues to pray.  He prays for forgiveness for those who have nailed him to the cross and references their ignorance in regard to what they are doing. In a certain sense he prays for all of humanity.  We like to think we know what motivates us to do the things we do in life, but do we really?

And they cast lots to divide his clothing. And the people stood by, watching; but the leaders scoffed at him, saying, ‘He saved others; let him save himself if he is the Messiah of God, his chosen one!’ The soldiers also mocked him, coming up and offering him sour wine, and saying, ‘If you are the King of the Jews, save yourself!’ There was also an inscription over him, ‘This is the King of the Jews.’

One of the criminals who were hanged there kept deriding him and saying, ‘Are you not the Messiah? Save yourself and us!’ But the other rebuked him, saying, ‘Do you not fear God, since you are under the same sentence of condemnation? And we indeed have been condemned justly, for we are getting what we deserve for our deeds, but this man has done nothing wrong.’ Then he said, ‘Jesus, remember me when you come into your kingdom.’ He replied, ‘Truly I tell you, today you will be with me in Paradise.’

Two thieves:  with their dying breaths, one chooses darkness, the other light.  The choice is stark.  Are we conscious of the choices we make that move us away or towards God?

It was now about noon, and darkness came over the whole land until three in the afternoon, while the sun’s light failed; and the curtain of the temple was torn in two. Then Jesus, crying with a loud voice, said, ‘Father, into your hands I commend my spirit.’ Having said this, he breathed his last.

Whereas the centurion in Mark declares Jesus to be the “son of God,” here Luke has him simply witness to Jesus’ innocence.  The injustice of Jesus’ death moves the crowd to repentance, and they return home, “beating their breasts,” the same words used to describe the tax-collector in the Temple in Jesus’ parable found at 18:9-14.

We all participate in some way in the destructive forces that ravage our world – the forces that conspired to put this innocent man who revealed the gracious love at the heart of God.

How have you been a part of the problem?