Mark 5:21-43 — Healing Is Found in Bringing Our Whole Truth Before God 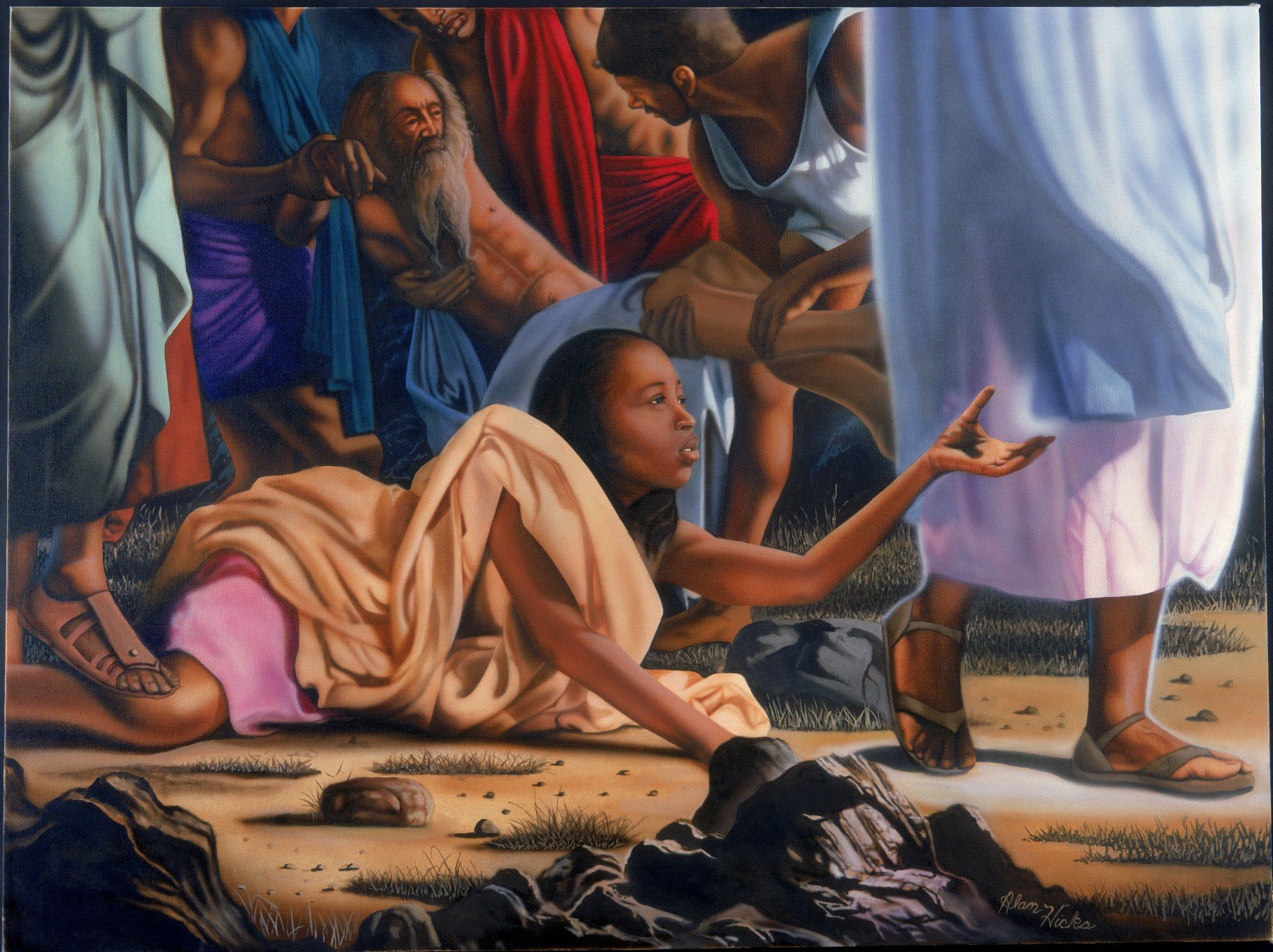 This is a compelling story — one I’ve preached on at least twenty times.  I always marvel how when I spend time with a Gospel story, I inevitably hear something new.  It’s mysterious really – the place I most commonly encounter the Holy Spirit.

This week my attention was captured by a detail in the story I’d never paid much attention to.  It occurs after the woman with the flow of blood has touched Jesus and been made whole.  In the eyes of everybody else present, Jesus should be in a hurry to get to the synagogue leader Jairus’ house where his little daughter is dying. Nonetheless, Jesus stops, turns around and asks, “Who touched me?”

In the mind of the disciples this is a foolish question – there’s a great crowd of people following along and many have been touching him. But Jesus felt power called forth from his body by a particular person and he is insistent on finding out who this person is.

And then comes the detail that caught my attention: The woman who has been healed of her affliction “fell down before him, and told him the whole truth.”

Truth is a word that gets used in a variety of different ways, but in this instance, the truth being spoken of is this woman’s particular truth – the unique story she alone can tell of how she had suffered for twelve long years — the discouragement and impoverishment that resulted from her illness, the loneliness and isolation and shame she endured through the years because the religious laws declared her to be ritually unclean, her touch contaminating others, rendering them unclean as well.

Her truth includes the fact that as one deemed “unclean” she was not welcomed in God’s house – the synagogue – nor was she permitted to be out in public amid crowds of people.

Her truth also included this peculiar but compelling idea that recently had gotten a hold of her – an idea surely planted in her head by the Holy Spirit, or what Wesley would have called prevenient grace – that if she could just touch the hem of the garment of this mysterious man named Jesus that everyone was talking about she would finally be made whole.

This sort of truth isn’t a generalized truth – it’s the distinct truth each of us has, our unique story, arising from our unique soul.  Although every soul has the capacity to love no two souls are exactly alike in how they express that love, and no two stories are the same.

In pausing to listen to the woman tell “her whole truth”, Jesus emphasized the importance of each of us claiming our personal truth.  In doing so, the woman found a healing that went beyond her physical affliction.

But that raises the question, what about “absolute” truth – the truth that is universal, applicable in all times and places? The sort of truth presumably we are supposed to be about here in the church.

There surely is something called “absolute truth” and yet it something that requires some care and humility to speak about because the concept of absolute truth can easily be abused.

It is striking that the only other time in the Gospel of Mark where the word “truth” occurs, it is on the lips of Jesus’ adversaries – and they have in mind an “absolute truth” that can be used as a sledge hammer.

It occurs towards the end of the Gospel, when Jesus is teaching the crowds in the Temple. Jesus’ adversaries approach him, hoping to trip him up in front of the crowds that are so attracted to him.  They begin with what sounds like praise: ‘Teacher,” they say, “we know that you are sincere, and show deference to no one; for you do not regard people with partiality, but teach the way of God in accordance with truth.”

Notice their emphasis on the notion that the absolute truth of God is impartial — a truth that does not care about anybody’s particular story or “truth.”  This is truth as unchanging laws applicable in all times and places. In this instance, they want Jesus to speak absolute truth regarding the question, “Does God want us to pay taxes to Rome, or not?”  — they want him to give them a simple yes or no.  It’s what we might call a “booby trap” because a simple yes or no to this question would blow things up.

The one Gospel in which the word “truth” occurs often is John’s Gospel, where we hear Jesus say, “I am the way, the truth and the life.” It’s striking that Jesus didn’t say “I am here to ‘tell’ you the truth.”

No, Jesus himself is the truth.  And the only commandment the man who is truth gave us was that we are to love one another as he has loved us.

The absolute Truth of the one who is love meets us in the whole truth of our particular lives, our unique stories.   Healing comes only by claiming our personal truth before God and the world.

Jairus also had a story.  He was very respected, dignified member of the community – a leader in the synagogue – one who probably under normal circumstances would have kept his distance from Jesus because the scribes and Pharisees considered his teachings dangerous – in particular, his unwillingness to buy into what they saw as the Absolute Truth of the Law.  Jairus was a respected leader in the community, but he was also a father, and recently his beloved daughter had gotten deathly sick. And now in this moment there is nothing more important than to find healing for his daughter, and this leads Jairus to do something he has never done before – indeed, never imagined himself doing – which is to run, push through the crowd, and fall on his knees before another man – acknowledging publicly for all to see his desperate need.  This is Jairus’ truth in the present moment, a moment in which there is no space for shame, and healing comes only in owning this truth as he lets go of the pride he had cherished in order to plea in utter humility for Jesus to heal his daughter.

Our particular truths shouldn’t be hidden under a bushel, in the darkness of shame, the way the supposed Absolute Truth of the religious laws compelled the woman to hide out in the shadows.

No.  Claim your whole truth.  Don’t try to be somebody God didn’t mean you to be.

We are at the end of Gay Pride month.  Oftentimes in the past the Church has looked at a handful of passages in the Bible that on the surface seem to be dealing with homosexuality, none of which come from the lips of Jesus and have claimed from them an Absolute truth of the Law that overrides all personal truths.  All too often the church has been – as the synagogue was for that isolated, suffering woman – a place where Gay people aren’t welcome, where the message is, “We’re not interested in hearing your personal story, your whole truth.  We are here to tell you the Absolute truth of Biblical Law and command you to conform to it.”

No matter that the only commandment the one who is Absolute Truth gave us is that we are to love one another as he loves us.

Every time a person claims the truth of their God-given sexuality, a healing takes place.

So, I’ve been studying the life and teachings of John Wesley with some of you.  It’s interesting that Wesley made a distinctive contribution to understanding the process by which the Church discerns “truth.”  Up until Wesley, there were three sources that were recognized. The first and primary source was Scripture, followed by tradition and reason.

Martin Luther didn’t trust experience as a guide to truth.  He thought it would get in the way of discerning the Absolute Truth of the Bible.  But the truth is, all of us read the Bible through the lens of our own personal experience, our own personal truth, whether we acknowledge it or not.

You know that saying I love so: “Be kind, for everyone you meet is fighting a hard battle.” That hidden, hard battle matters, and we should honor the unseen battles of others. It is a part of their truth.

For John Wesley, the wondrous love that Jesus revealed was the key to interpreting the Bible.  His brother Charles wrote a beautiful hymn that is based upon the strange story in Genesis in which Jacob, returning home after 20 years spends a long night on the shore of Jabbok River wrestling with this unseen stranger – a hard battle with a mysterious combatant who is in some sense God.  It’s truly a strange story of a great wrestling match in which Jacob perseveres, much like the woman with the flow of blood 12 years persevered, refusing to give up.  Through the long night Jacob clings to the mysterious opponent for dear life.  As daybreak approaches, the one with whom Jacob is wrestling demands he let go.

But Jacob refuses, saying he will not let go of the great mystery until he receives from him a blessing.

Charles Wesley uses this strange story as a metaphor for our struggle to know the one who gave us life.  In the third verse, Jacob cries out, “Yield to me now, for I am weak, but confident in self-despair!  Speak to my heart, in blessing speak, be conquered by my instant prayer.”

So let me bring my sermon to an end, as we sing together the final verse of Charles Wesley’s beautiful hymn, “Come, O Thou Traveler Unknown”, as Jacob discovers the identity of the adversary, the one who is Absolute Truth.