Philippians 2:1-11 — Hearing the Story of Palm Sunday in the Midst of the Epidemic. 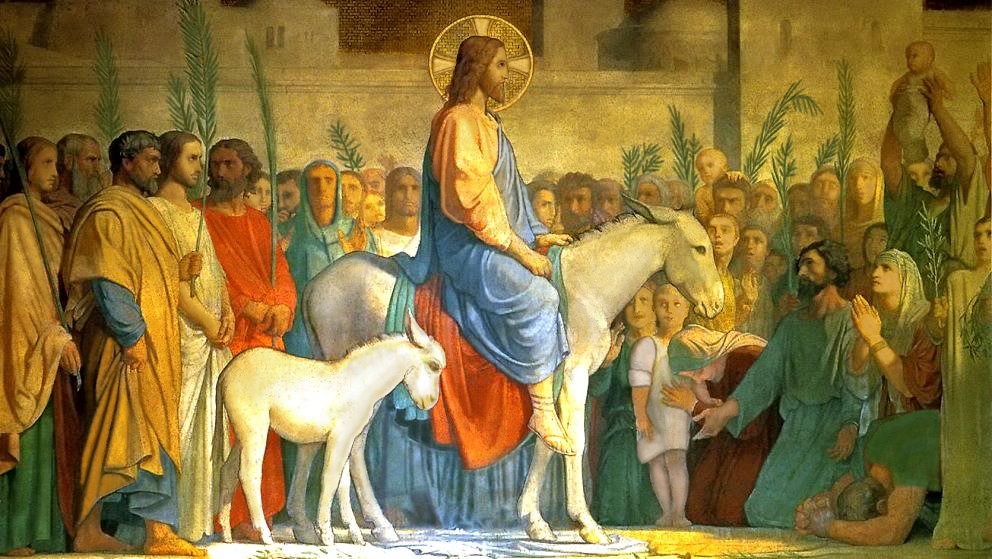 A sermon preached on Palm Sunday, April 5, 2020 – the fourth Sunday of live streamed worship because of the Pandemic – based upon Philippians 2:1-11.

Midway through the Gospels, Jesus makes it clear to his disciples that although he is the messiah sent from God to save the people, he is not the messiah they want him to be.  He tells them that his mission will take him to Jerusalem where he will be handed over to the religious authorities and the Roman authorities, suffer and be killed.

This wasn’t what they wanted to hear.  Simon Peter, in fact tried to take Jesus aside to talk him out of such crazy talk which led Jesus to lose his temper.  “Get behind me, Satan!  You don’t understand how God thinks.  You only understand how the world thinks.”

“Let the same mind be in you that was in Christ Jesus,” said the Apostle Paul.  But it isn’t easy to take on Jesus’ way of seeing things.  The disciples wanted a messiah who would fix the troubles of this world, not one who was going to take the path of a lowly servant, “obedient even unto death.”

Seeing the world like Jesus saw it didn’t come easily for the disciples in spite of all the time they spent in Jesus’ company.  In the 19th chapter of Matthew’s Gospel we hear about the disciples trying to keep people from bringing their children to Jesus for a blessing, because in their minds – the mind of the world – children weren’t important enough.  Their value would only come later when they grew up and earned their keep in this world.

In the 20th chapter Matthew tells us three things that happened immediately before Jesus made in entrance into Jerusalem.  First, he tells him for the third time how when they get to Jerusalem he will suffer and die.  It seems to go right by them, but it is understandable given the fact they have been steadily witnessing Jesus increasingly take on rock star messiah status.  (Remember last week the 5000 people who followed him along the shore in order to simply be in his presence?)  How could things go so badly in Jerusalem if all the world seems to be clamoring after him.

The second thing that happens reflects this rock star phenomenon.  James and John approach Jesus privately saying, “Master, we want you to do whatever we ask.”  Jesus looked at them and said, “What do you want me to do for you?”  They answered, “When you come into your glory, allow us to sit at your left and your right.”  It wasn’t enough to be one of the rock star messiah’s twelve closest associates – they wanted the glory and prestige of the top two seats.

Jesus said to them, “You have no idea what you are asking.  Are you able to drink the cup which I drink?”  He meant the cup of his suffering and death.  Naively the responded, “We are able.”  But we know how the story plays out.  They run and hide when the going gets rough.  Jesus takes advantage of the occasion to say that in the Kingdom of Heaven greatness if relating to being a servant of all.

The third story that Matthew tells involves Jesus passing by the town of Jericho.  A large crowd has gathered to catch a glimpse of the rock star messiah.  Two blind beggars – such nobodies in the eyes of the world that they aren’t even given names – are sitting by the side of the road.  The two provide a counterbalance to James and John.

When the blind men hear that Jesus is passing by they shout out, “Jesus, son of David, have mercy on me!”  The crowd tells them to shut up.  They are nobodies who are unworthy of this great man’s attention.  But nevertheless, they persisted, crying out all the more loudly to Jesus.  Jesus stopped, stood still, and then called the two men to him, at which point he asked them the exact question that a short while before Jesus had asked James and John:  “What do you want me to do for you?” “Master,” they replied, “Allow us to see again.”  Having compassion upon them Jesus touched them and they could see.  And they followed Jesus on his way to the cross.

And so this week – and in this time of the pandemic – this is the choice set before us:  What are we want?   Our own individual survival, our own personal glory and worldly fortune?  Or do we want to be able to truly see what matters?  That love is the thing.

The story continues.  Jesus enters the city of Jerusalem riding a humble donkey, greeted enthusiastically by thousands.  The population of Jerusalem would have multiplied several times that week because of all the pilgrims arriving in the city for the festival of Passover in which Jews remember the liberation God’s mighty hand brought them from bondage to Pharaoh in Egypt.  If ever there was a time for the messiah to appear to lead the great rebellion that would throw off the shackles of the religious and Roman authorities it would be now, and the entire city is talking about the new rock star messiah.

In Matthew’s Gospel Jesus goes directly to the Temple – the place where Jews believed the very presence of God dwelt.  The outer courts of the Temple were overrun with the big business that religion had become with money changers and people selling the doves required for sacrifice.  Jesus had said earlier you can not worship both God and money, and clearly the system in charge has come to worship money.

Once more Jesus loses his temper, driving out the people making a buck off of the perversion of religion.  No one is injured.  Jesus does not embrace violence.  But momentarily the simple force of his personality creates a holy empty space within the Temple.

And then, Matthew tells us, Jesus set up a medevac station there in the temple.  The invisible people – the sick and the blind – were brought to him, and Jesus healed them.  The heart of God was revealed – a heart filled with compassion and mercy, cherishing the least among us was revealed.

Matthew adds one other little detail.  Children filled the newly opened space of the temple singing songs of praise – the same children the world considered to have so little significance.

For a brief moment the Kingdom of heaven touched down that day in the Temple of Jerusalem.

It was, however largely a symbolic act.  In all likelihood the next day things were back to business as usual.

Jesus was not willing to be the messiah the people wanted – the one who would with a mighty, violent show of force fix all that was wrong with the world.  He was the messiah who invited people to enter into the love for which they were created.

And because of this, in short order the enthralled throngs of admirers would turn into an angry crowd crying, “Crucify him!!”

All hell broke loose, and the shallowness of the brash confidence of James and John was clearly on display.  They ran to save their own skins when the going got rough.  It was pretty shameful.

I want to switch gears here and talk about the Spanish Flu Epidemic that tormented the world from 1918 to 1920.  I never knew much about this history until the attention was drawn to it from the present crisis.  It’s surprising we tend to know so little about it.  It was horrible.  50 million people died worldwide.  Here in the United State there were 650,000 deaths – about the same amount of people who died in the Civil War, about five times as many Americans who died in World I when the epidemic started, and significantly more than died in World War II.

The reason that up until now we heard so little about it was that for the most part it did not — as Abraham Lincoln said – bring out our “better angels.”  For the most part people focused strictly on their own survival.  There weren’t a lot of stories told about people stepping up to embrace the risk of serving others.

Once the epidemic was over there was a general sense of shame in Americans about how they had behaved, and so they didn’t talk much about it.  They wanted, in essence to cover up that part of our history.

Which makes it all the more remarkable that every one of the four Gospels goes to great lengths to tell the story of the disciples “shameful” behavior when all hell broke loose when Jesus was arrested.  You would think they would have covered that up.  But afterwards, the church recognized that this was an important part of the story – the tale of how the disciples were humbled – broken open by all that transpired.  Reflecting upon this story has pointed generations of Christians in the direction of humility.  This is what we are capable of when we become smug about our religion.  Let us not forget.

It is striking that we are entering Holy Week as the president has told us to brace for what will likely be a whole new level of infection, pain and death in this epidemic.  How will we respond this time?

There have been of course some stories about people behaving badly, rudely in stores fighting one another in their attempt to hoard for the coming season of isolation.

But there have been other stories that are hopeful.  Employers who continue to pay their employees’ wages even though there is no work for them to do.  Landlords giving renters amnesty from paying rent.

I have had many people within our church asking how they can help.  People volunteering to shop for those who are at risk.  People giving money to help those who have lost their jobs.

This is the meaning that arises out of this epidemic – the stories we are writing.  Do we have our eyesight restored as a country, overcoming our divisions and our pettiness, and focus on the love for which we were created?  Or do we hunker down into ourselves concerned only with our own survival?  Do we take this opportunity as I have found myself saying a lot lately to take a crash course in following the way of Jesus?

We are not alone.  God stands ready to give us the Spirit to move us out of fear and into love.  For it was for love – and love alone – that we were created.