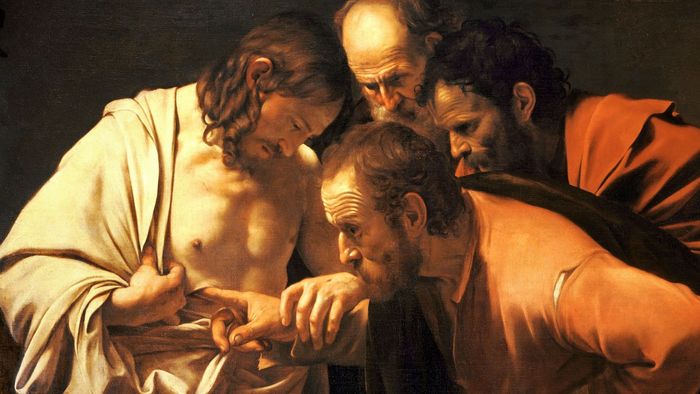 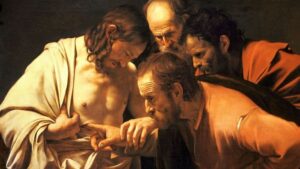 When we try to imagine what the risen Christ looked like, I suspect that we imagine something like this:

which is to say a Jesus who has left all pain behind; his body perfectly whole, perhaps like Peter Paul Rubens liked to imagine him,

with body beautiful – the world’s image of physical perfection – the sculpted body of a young man who has spent countless hours in the gym lifting weights — a body unblemished in any way.

Indeed, if we had made the story of Jesus’ resurrection up, this is how we would conjure him – with all reminders of the pain he suffered altogether missing.

So it is striking that in John’s Gospel great emphasis is put on the fact that the wounds inflicted on Jesus at his crucifixion body are still present on his resurrection body – even as it has the capacity now to pass through locked doors.

We don’t get any indication that the wounds on his body continue to torment him as they did when he hung on the cross. They have been transformed: they now have a kind of beauty. Not only do they prove to his disciples that, yes, this really is Jesus. They are an expression of God’s love for them – the lengths God was willing to go to find us lost sheep.

But it’s not just past tense: It expresses something of God’s presence here now, in this wounding, broken world we find ourselves living in.

Perhaps the deeper question for Thomas expressed in his demand to see and even feel with his hands the wounds of Christ was not merely the assurance that God is real, or that there is, in fact life after death. Rather the assurance Thomas was seeking was that God is here with us in this wounded, broken world — that we are not abandoned in our suffering.

“It is finished,” Jesus cries out on the cross in John’s Gospel. What is finished – done away with – are the underlying assumptions of the dominant religion of the day: that God requires perfection of human beings – a perfection we cannot achieve, leaving us always feeling unworthy. What is finished is the burdensome requirement of the perfect offering of “unblemished” animals for sacrifice in the Temple to atone for our sins. In spite of our inherent imperfection – God desires an immediate and intimate relationship with us.

We don’t sacrifice animals in the Temple any more, but we can be driven by the same need to be perfect – to have the perfect offering to be presentable before God.

I am reminded of a line from a Leonard Cohen song that is well worth holding on to: “Forget your perfect offering. There is a crack in everything. That’s how the light gets in.”

Cohen may have found his inspiration for this verse from a wonderful 13th century mystical, Muslim poet named Rumi, who said: “The wound is the place where the light enters you.”

Perhaps it would better be stated, “The wound is the place that has the potential for the light to enter you.”

We are all wounded in various ways. We may not be wounded physically, but you can be sure that people who live life as a constant quest for physical perfection are driven by an inner wound of the spirit.

As we go through life, the hurts, disappointments, betrayals, abandonments – the burden of their own sinfulness and brokenness all pile up inside us. What will we do with these wounds?

The wounds on Jesus’ resurrection body are the sign that God desires to transform our wounds — make them holy wounds — places where the light of God gets in.

Here is another quote that I’ve been thinking about a lot lately: “If we do not transform our pain, we will most assuredly transmit it.” I believe it was the Franciscan priest Richard Rohr who said, but I first heard spoken by Father Greg Boyle, the Jesuit priest who works to help set the young people of LA free from the destruction of gang life. If these young people cannot acknowledge their wounds and bring them before God to transform them into a source of compassion and connection, they are doomed to pass their wounds – their pain – to others.

The same is true for all of us.

Two weeks ago I stumbled upon this new beautiful documentary on PBS: “Into the Night: Portraits of Life and Death.” Nine quite different people talked openly about their relationship to death. The people ranged widely. On one end was a rich guy who could view death as nothing but the worst possible scenario, who was determined once he began to approach death to have his body frozen and preserved in some laboratory somewhere so that somewhere off in the distant future when medical science has learned how to make it possible for a person to live forever he can be unfrozen and reap the benefits of advanced science.

At the other end of spectrum was a Christian writer I am familiar with named Phyllis Tickle. At the age of 83 she was diagnosed with a form of cancer which meant that in all likelihood she would be dead within four months. When her doctor informed her of this diagnosis, she surprised him with how serenely she took the news. Phyllis told the doctor she had raised her children and buried her husband — she felt she had accomplished the work she was put on earth to do. Not only that, when she was a young woman giving birth to her first child, she nearly died, and in coming so close to death had been granted a beatific vision of the life beyond this one. She knew where she was headed and felt no fear. So she spent the last weeks of her life calmly appreciating the gift of her life.

The person who’s words moved me the most however was a heart surgeon named Jeffrey Piehler of about my age who had fought cancer for well over a decade, and now he had reached a point in which he knew that he would soon be dying. He said he would have loved having received vision like the one Phyllis Tickle described. But he was approaching death without such direct assurance.

What he did describe was going through a process of letting go with different stages. Much of what he had felt called to let go of – his concerns for worldly possessions and such – he was glad to be done with. He felt lighter without them.

Though the process led towards what he called a “sweet surrender” the stages were not always linear. A tender inquiry from his daughter – “How did you sleep last night, Daddy?” — could send him back into an ocean of grief regarding all he would be leaving behind.

But he described moving into a blessed gratitude in the recognition of all the love there is in this world. He spoke of a friend – a craftsman who worked with wood with whom he had designed the casket he would be laid out in. The friend had promised to be there for him when he got towards the end and needed someone to wipe his butt. Overwhelmed with appreciation he said, “Can you imagine a friend like that? Having a friend say that to me makes all of this worthwhile… People ask me if I can imagine having this [experience the ecstasy] without having a death sentence? I don’t know. But I would never go back to the way I was before I had incurable cancer.”

What is foundational to my faith, which you hear me say again and again in various ways as I preach is that in the end life is all about love. God is love, and it is for love that we were put upon this earth. If the wound of incurable cancer can be the means by which we perceive this truth – experience it in the core of our being – then such a wound could surely be described as holy.

There is that story of a man’s vision of heaven and hell that I have often told because it seems to express a deep truth, which I will briefly summarize once more. A man has a dream in which he is taken to hell, where he is surprised to find people sitting around a beautiful banquet table. Their arms are inflicted with a paralysis that makes it impossible for them to feed themselves, and so they waste away with an abundance of food right in front of them.

The man is then taken to see heaven, and he is surprised to see that on the surface it looks very much like hell. There is the same banquet table with people sitting around it, and in fact the people have the same paralysis in their arms. There is one simple difference in heaven: the people are feeding one another.

I have often told this story, but reflecting on the story of the holy wounds on Jesus’ resurrection body, I was led to ask, What if the people at the banquet table didn’t have the paralysis of their arms? What then? And the answer that came to me was that it would have been so easy for the people to gorge themselves in an ever-increasing isolation, never truly needing anybody else.

When owned and acknowledged and brought before God, the wounds that life has inflicted us with can become bridges that connect us with others, and with God. They reveal the love that is the deepest truth, and as such they become holy wounds that let the light in.