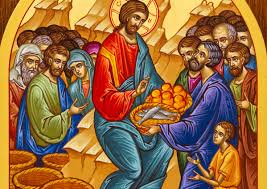 A sermon preached on August 2, 2020 based upon Matthew 14:13-21 – Pastor Jeff’s first Sunday back after a month of rest and renewal in the midst of the Pandemic, entitled “How I heard this very familiar Jesus story in a new way.”

I’ve preached on this story at least forty times and it continues to amaze me that I each time as I come from a new place in my life I received new insights to the meanings of the story – I hear God speaking to me in new ways.

I was struck this time that at the outset of the story Jesus is sad (not depressed).  He has good reason to feel sad – he is grieving for his friend and mentor John who has been brutally killed by Herod.    He is also, I think grieving over the fact that this world is filled with so much injustice, violence and cruelty.  And perhaps he grieves for his own life, knowing that his life will end in a similar fashion to that of John

Oftentimes our response when we feel sad is to see the sadness as something bad. We see it as something to try and distract ourselves from feeling, which is understandable, and sometimes perhaps necessary.

But sadness isn’t bad – the grief it expresses is an expression of love.  The only way to avoid grief in this world is to avoid love, and a life without love would hardly be life at all.

The striking thing in the story is that Jesus doesn’t seek to distract himself from his sadness, say by getting busier.  Instead he seems to move towards his grief, setting out for a place where he can be apart from the crowds for the specific purpose I would argue to give himself space to feel his grief.

It’s as if Jesus says to himself, “Sadness is what my life involves in this moment, and I will embrace this sadness.”  Jesus does this knowing that sadness isn’t a permanent state – that as Psalm 30 says, “Weeping tarries in the night, but joy comes in the morning.”

If we try to avoid our grief, it doesn’t go away.  It simply gets buried, leading to depression and destructive choices, the source of which we are unconscious.

So in my mind I imagine Jesus setting off in a sailboat for a trip of a couple of hours.  He sits in silence and his disciples also.  He quietly reflects on his friendship with John and what his death means as an expression of the great heartache of the human race.  I suspect the sailboat ride was nourishing for Jesus.  Grief has a way of tenderizing our hearts – connecting us with the grief of others.

Jesus and his disciples anticipate more of the same when they turn the boat towards shore – towards the secluded places they is their destination.  But quickly they realize it is not to be – a large crowd of people have followed along on the shore and are waiting to be with Jesus.  You know the old expression:  “Life is what happens when you’re making plans.”

The impression you get is that the disciples are not pleased. “No, no, no!” they’re thinking.  “This isn’t how this day was supposed to go!”  That’s how most of us would have reacted as well, I suspect.

But Jesus’ response seems different. Jesus doesn’t clutch to what he had been experiencing just a few minutes ago.  It’s as if he simply lets that go and opens himself up to what the present moment now presents him with.  There is, in fact a certain congruency between what he was experiencing and what he sees in front of him, because the sorrow he has experienced inside himself he now recognizes in the crowd waiting for him on shore.  The Gospel writer tells us that Jesus had “compassion” on the crowd.  He feels a shared grief that creates a communion that is holy.

Jesus spends the afternoon slowly walking among the crowd, healing the sick.  There are certain people in this world – Mother Theresa, the Dalai Lama, Fred Rogers and Nelson Mandela are a few that come to mind – who could move about a crowded room of people in a distinctly unhurried way interacting with people one by one in a manner that conveyed to whomever they were speaking with in the given moment that this person had their full attention – that they were truly seen and valued.  Such people channel the spirit of Jesus – the spirit I think he manifested among the people that afternoon.  The crowd absorbed his Spirit, and the collective mood of the people shifted.

In the meantime, the disciples clearly aren’t in the same head space as Jesus, Their focus is on the passage of time.  We track time with our watches and smart phones – in those days people tracked time by how far the sun has progressed in its move across the sky.  The attention of the disciples is captured by the fact that in a couple of hours the sun will set and it will be dark.  Their anxiety builds as they worry about the unruly crowd that seems to have brought little food with them.

In Greek – the language of the New Testament – there are two different words for time.  One is “chronos” – the time that we are most familiar tracking with watches and calendars, time that moves forward in a straight line compelling us to anticipate will come next.  We all have to deal with chronos time – but if that is the only kind of time we deal with, well life is just a kind of prison cell.

But there was another word for time – “Kairos” – which refers to what we might call “deep time.”  These are moments when time seems to touch eternity.  Jesus sensed what the disciples were missing — that in the midst of that crowd that afternoon a shift into Kairos time was taking place.  Jesus central proclamation was that the Kingdom of heaven is at hand – breaking into earth time – and such a moment was presenting itself to them.

The disciples come to Jesus with their anxieties and tell him to send the crowd away that so they can find food before the sun sets.  But Jesus is unwilling to taken on their anxiety.  Calmly he looks them in the eye and says, “You give them something to eat.”

This is crazy talk, they think.  The disciples look about them and see only scarcity.  But Jesus looks on the same scene and sees an abundance of grace and possibility because heaven was touching down on earth.

They bring the little food they have to Jesus – five loaves and two fish.  He takes the food and gives thanks to God for this modest offering.  He has the people sit quietly on the green grass and then has the disciples begin to pass their simple offering out to the crowd.

Usually we hear what happens next and take it to be a supernatural miracle that Jesus made happen with his supernatural power – the laws of physics were broken as the five loaves and two fish spontaneously multiply.  But I have always doubted this interpretation because a) it doesn’t actually say that is what happened, and b) such miracles weren’t really Jesus’ style.  You may recall that when the devil tempted Jesus to turn a stone into a loaf of bread he refused to do it.

The kind of miracles that Jesus works are ones in which we are invited to participate.  And so what I imagine happened that day was that witnessing Jesus and his disciples give away the little food they had brought, those who had brought a little something of their own were moved to do the same.  And it was enough — more than enough.  Beyond the nourishment of their bodies, their spirits were nourished by experiencing for a few brief moments being a deep communion with God and with everyone else who was present.  They experienced what it felt like to be in a large group of people where everybody viewed the other peoples’ needs as important as your own.  They got a glimpse of the kingdom of heaven

So I decided to take a longer vacation than I usually take – the entire month of July – because I had worked straight through for six months with the recent months consumed by the challenge of being in ministry in this strange time of the pandemic.  I realized I was exhausted – not so much physically as spiritually.  Looking back, one way to describe what had happened to me was that – unlike Jesus – I had lost the present moment.  I was constantly thinking about the next thing on my never ending list of things to get done.

For the first two weeks of my vacation it was hard for me to shift out of the mindset in which I was trapped.  I wondered, “Who am I if I’m not working and accomplishing things?”  And so I set about getting things done in the parsonage that I had put off.  I cleaned and organized the incredibly chaotic garage.  I hung pictures on the walls.  I cleaned and organized the office in which I track bills and such.  I organized my sloppy files.

These were good things to get done, but at some point I realized that the greater challenge wasn’t the chaos outside me – it was the chaos inside me.  At which point I began to spend more time sitting in silence and going for walks in the woods.   I moved into what is broadly called “contemplative prayer” and meditation, slowly bringing myself back to the present moment.  I’ve got a long way to go, but at the end of my vacation I was a little closer to the state of being that Jesus manifest than I was when I began my vacation.

I return to my work as pastor with a desire to make “contemplative prayer” and meditation a significant part of my ministry, consequently in the month of August I will be offering a couple of noon time Zoom sessions in which I invite you to learn about, and practice with me mediation.  I will also be leading a Bible Study on Thursday evenings in which I invite you to join me as I explore some of the guidance Scripture offers us as we seek to live more mindfully present to God’s grace and embody God’s love.

I hope you will join me on this journey.