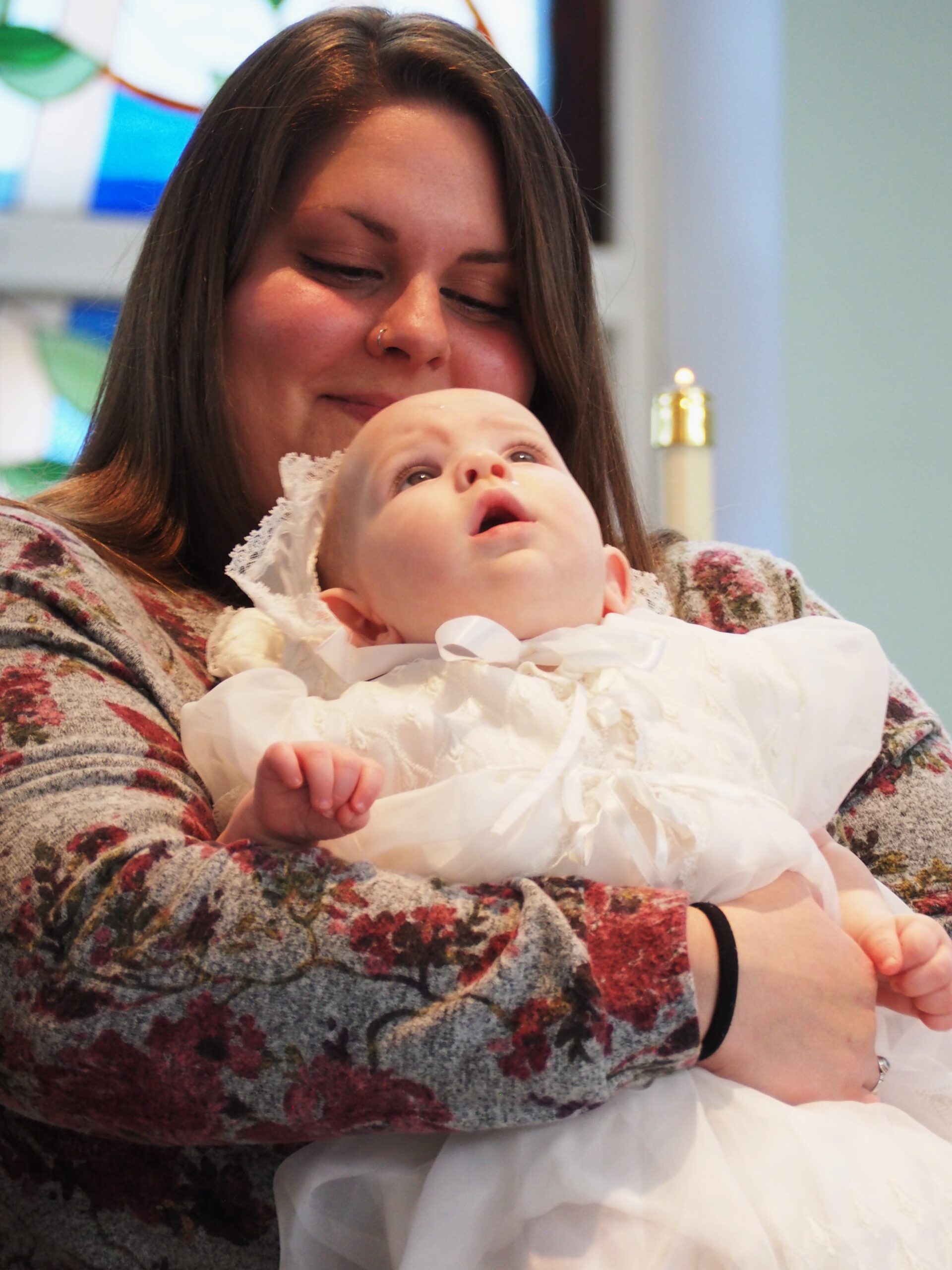 A sermon preached on November 17th, 2019 based upon Isaiah 43:1-3a on the occasion of the baptism of LilyAnn Hope Bryant, entitled “It Takes Courage to Be a Parent.”

Our lives are full of wonder and mystery, but in the unavoidable tedium of the daily grind of life we become deaf and blind to life’s inherent wonder and mystery.    Boredom and monotony sets in. We harden our hearts to survive.

But I know Heather and Steve will agree with me when I say that one place where a sense of awe awakens before the mystery of life and with it the softening of our hardened hearts is with the birth of a child.  Parents gaze at this precious bundle of life and ask:  How is it that this child exists – this child of which there was no trace just nine months earlier?  Where did she come from?

A parent contemplating their newborn child feels as though they are witnessing a miracle and often describe the moment as providing their greatest clarity that God exists.  There is an instinctive sense of finding oneself absolutely humbled.

In the marvelous poetry of the first chapter of the Bible God is depicted over the course of six days creating all that exists out of nothingness. At the end of each day God steps back to look at what God has created and calls it “good.”  The creation evolves an ever increasing complexity that reaches it’s pinnacle when on the sixth day God creates a human being, wherein God gazes upon all God has created and declares it not just “good”, but “very good.”

The human beings created on the sixth day are described as “made in the image and likeness of God.” I suspect the ancient Biblical author who coined this expression was inspired by the Holy Spirit as he or she gazed upon a newborn baby.

Every parent of a newborn child re-experiences what the ancient author perceived — an absolute sense of “goodness” – a clarity that this child is “good” not because of anything the child has accomplished or will possibly one day accomplish but because it is endowed with an innate goodness — an inherent sacred value.

In that moment there is an awareness that before this child takes on any other identities its original identity is that of a child of God.

And yet along with this overwhelming awareness of goodness in the birth of a child, another awareness comes close on its heels and that is the consciousness of goodness’s opposite, the reality of evil.

The questions asked of Heather and Steve and of all of us before we baptized LilyAnn Hope revolved around the struggle between good and evil and God’s call to commit ourselves to turn toward goodness and away from evil; towards the light and away from the darkness.

Some evil is strikes us as undeniably obvious: the evil of Hitler, the evil of the terrorist attacks on 9/11.  But much of the evil that threatens us is far more subtle and the daily grind of life often distracts us from recognizing it.

In the second creation story in Genesis 2 and 3 we hear about how the first couple was seduced by the subtlety of evil, accepting the lies the Evil One and in turn becoming liars themselves.

We live in a culture where we have become increasingly comfortable with not telling the truth – with telling lies.  It’s dangerous to souls and dangerous to communities.

There are lies embedded in our culture that deceive us regarding where our true worth as persons is found.

For girls and women these lies often come in the message that their worth is found not in their identity as a child of God, but rather from being pretty – from being desirable in the eyes of males.  This lie leads to a preoccupation with their appearance and a constant comparison and competition with others. It can lead to a failure to develop the gifts God has given them because nothing else seems to matter by comparison to one’s appearance.  And worst of all it leads to self-loathing regarding their bodies because invariably all women fall short of the cultural ideals regarding physical beauty.

For boys the lies tend to come in the message that our worth is tied up in our capacity to always come out on top – to devalue cooperation in favor of coming out victorious in competition.   It comes in the message that we should never show weakness or vulnerability — that “big boys don’t cry.”  It teaches us to harden our hearts and avoid intimacy, losing touch with our feelings and deepest longings.

These lies are so deeply a part of our culture that on our own we cannot help but take them to heart and be poisoned by them. Alone, it’s hard to stand up to these lies and this is why we always baptize babies with the whole church gathered:  we need the support of one another to distinguish between the truth and the lies.

And so this day together we call out these lies as we baptize LilyAnn, reminding ourselves from whence our true worth really comes: from God’s constant love for us — God’s delight in the uniqueness in which God has created each one of us.

The myriad threats of evil to the body and soul of LilyAnn are quite real and so I want call attention to the extraordinary courage required by Heather and Steve – indeed, all parents to raise up a child in this world.

Even as a parent gazes at their newborn baby and is awakened to awe and wonder, there is another emotion that typically arises along side it and that is terror.  The utter helplessness of the baby is so vividly on display. The baby will surely die without the parents’ constant care and attention.  And even if the child should survive the physical threats of this world to live a long life, this too we know for sure:  in the course of her journey the child will experience times of excruciating suffering because such is the nature of the journey that awaits them.  It won’t be an easy ride.  A lot of the suffering will come from outside them, but a big part of the pain they endure will be the consequence of their own bad choices — the truth expressed in that second creation story — and the parent who cannot help but love the child with all their heart will suffer all these things alongside the child.

And so yes, it takes courage to be a parent.

I chose this morning’s verses from the prophet Isaiah to inspire courage in Heather and Steve and all of us on this daunting journey that is life.  Let’s listen again to a few of the lines as God addresses us directly:

“Do not fear, for I have redeemed you; I have called you by name, you are mine.  When you pass through the waters, I will be with you; and through the rivers, they shall not overwhelm you… For I am the Lord your God.”

There is a third meaning to the water of baptism and that is death, specifically, death by drowning.  We are reminded of Jesus who willingly entered death for our sake and of the miracle of his resurrection.  The water reminds us that LilyAnn is baptized into Jesus’ death and resurrection.

So we also proclaim this day that there is nothing that can separate us from the love of God – nothing in this life, nor death itself.  Heather and Steve, as you encounter the terror that is a part of parenting remember this truth as well, and try as best you can – daily, hourly, and even at times minute by minute — to hand your fears over to the God whose love is more powerful than everything that threatens us, even death itself.  A life that has succumbed to fear is a life that has succumbed to evil.  In the end, it is our love, not our fear that we want to define us, not only in parenting, but in all that we do in whatever time is allotted to us here on earth.