It’s All about Love; Self-Condemnation Leads to the Hatred of Others 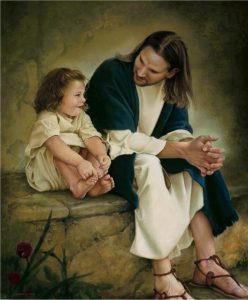 We’re jumping ahead here in the Gospel of Mark.  The story we are about to read takes place in the last days of Jesus earthly life, after the story that we will focus on next Sunday – Palm Sunday – when Jesus finally entered the city of Jerusalem.  Jesus has already driven out the money changers and those selling animals for sacrifice in the Temple – those who have had a hand in turning the Temple into a den of robbers rather than a house of prayer.  He is now a dead man walking, and he knows it. The religious establishment that oppresses the masses of poor people, profiting both in terms of money and power from the way the religious system is set up recognize Jesus as a threat to the status quo and are conspiring to find a way to take Jesus out when the crowds that are so drawn to him aren’t around.

He’s teaching in the Temple, and the crowds are captivated by his teaching.  Immediately before our passage Jesus has fended off three separate questions by the religious authorities, including some scribes – questions designed to trip him up and make him look bad in front of the crowds. But Jesus answers the questions deftly.

And so now a scribe steps forward to ask Jesus a question.  Scribes were scholars who could read and write and devoted to the study of the Torah and the 624 laws it contained.

Up until this point every time the scribes have been mentioned they are portrayed as Jesus’ adversaries.

For instance, you may remember a couple of weeks ago that when Jesus came down from the mount of transfiguration, he found his disciples arguing with the scribes – and the impression we had was that this argument had distracted the disciples from their true center, and blocked their capacity to be channels of God’s healing power, rendering them useless in helping a poor tormented boy.

We talked about how arguments are rarely productive, because the majority of the time they are not about getting to the truth but rather about winning – defeating the adversary.

So up until now every time we heard about scribes they’ve been criticizing Jesus and trying to engage him and his disciples in arguments and by this point in the story we’re ready to stereotype the scribes as the “bad guys”.

But this scribe, having quietly listened and been impressed by the answers Jesus has given to the questions of his adversaries, approaches Jesus with a sincere an open heart, not looking to defeat Jesus, but to engage with him in a conversation in pursuit of the truth regarding the heart of the Torah.

Listen for the word of the Lord.

One of the scribes came near and heard them disputing with one another, and seeing that he answered them well, he asked him, ‘Which commandment is the first of all?’ 29Jesus answered, ‘The first is, “Hear, O Israel: the Lord our God, the Lord is one; 30you shall love the Lord your God with all your heart, and with all your soul, and with all your mind, and with all your strength.” 31The second is this, “You shall love your neighbor as yourself.” There is no other commandment greater than these.’ 32Then the scribe said to him, ‘You are right, Teacher; you have truly said that “he is one, and besides him there is no other”; 33and “to love him with all the heart, and with all the understanding, and with all the strength”, and “to love one’s neighbor as oneself”,—this is much more important than all whole burnt-offerings and sacrifices.’ 34When Jesus saw that he answered wisely, he said to him, ‘You are not far from the kingdom of God.’ After that no one dared to ask him any question.

Thus ends the reading; may God bless our hearing of the Word.

So Jesus and the sincere Scribe agree – the heart of the law is love, joining together two commandments found in separate places in the Torah which in fact can’t be separated – the love of God and the love of neighbor.

If you aren’t loving your neighbor (all neighbors – neighbors with a different skin color, nationality, religion, or political ideology) you’re not really loving God no matter what you may claim, because every person is precious to God.

And I would suggest that if you are not seeking to love God there is a limit to how far you will get when it comes to loving your neighbor.   There surely are atheists who can express love, often more than people who profess to be Christians.  But here is the problem:

How to you love the person who doesn’t present a self that seems worthy of love?

There is an old Jewish proverb that declares, “Before every person there marches an angel proclaiming, ‘Behold, the image of God.’”

So the past year with this pandemic and everything else we’ve gone through as a nation there have been some shining examples of love.  Some are simple kindness, some involving people putting their own lives at risk to care for others.  That’s called sacrificial love.  It’s what Jesus is all about.

There has been plenty of examples of such love if we have but the eyes to see them as Jesus would say.

But we also know that the past year has revealed much that is not of love.  In big and small ways:  mean-spirited arguments, hostility, contempt, cruelty, violence.  None of us are exempt.   (If you hate people who overtly express hate, you’re still failing to love.)

I’ve seen a rising tide of depression and anxiety and despair in peoples’ lives.  We try hard to hide it away, but its there in most of us at least some of the time.

And connected to these things, I’ve seen something else as well.

A great deal of self-contempt.

Self-contempt has always been around, but the pandemic has brought it out all the more intensely.  It makes sense.  The pressures of the pandemic have provided a lot of occasion for us to see those parts of ourselves that can seem distinctly unlovable.

Perhaps it’s irritability and saying things to people you wish you could take back.  Perhaps it’s a failure on your part to get organized or motivated and giving in to overeating or binge-watching Netflix.

Perhaps its inability to hold off feelings of anxiety, grief, or despair.

Perhaps you are a parent who has routinely lost your temper with your children and feel like you’re failing in this primary job of parenting.

My point is, there have been plenty of stuff arising inside us during this time that can lead us to feel pretty unlovable.

And so, let’s consider again the golden rule: “Love your neighbor as yourself.”  The reference point for how we are to love our neighbor is the love we assume we have for ourselves.

But that’s the thing.  A good deal of the time, we’re not very good at loving ourselves. And by loving ourselves I don’t mean being self-indulgent.  I mean relating to ourselves the way a good parent would relate to their child.

I suggested to you a couple of weeks ago that it can be helpful in understanding the spiritual journey and following Jesus by thinking of ourselves as having two different kinds of selves.  One is the shallow self, or the false self — the anxious, clutching self-absorbed self that is constantly comparing itself with others.  Sometimes this leads to grandiosity and contempt for others.  More often it leads to feelings inferiority – worthlessness.  When we’re feeling stressed, we generally live out of this little self, and the result is self-contempt and shame.

Self-contempt and shame leads in two directions.  One is depression — the loss of the joy that is life.

The other is in hatred towards others.  There’s a certain logic to it.

Let me flee from the feeling of self-contempt by turning my contempt outwards.  Let me focus in others what I can’t bare facing in myself.  Rather than condemn myself, let me condemn others instead.

When I hear stories of people doing or posting horribly hate-filled things, my first knee-jerk reaction may be to feel hatred and contempt for them.   But, if I reflect a little deeper – if I pray — I realize that for a person to do hate filled things – well, they must be struggling with some mighty powerful self-contempt in themselves.

So there is the little, false self, but there’s a deeper self as well – the soul – which is where the image of God dwells – where we are connected to the eternal love of God.

It’s there inside all of us – though often it gets kind of buried.  And we access this deeper self when we pray.

Tapped into God’s eternal love, this deeper self  has the capacity to be a good parent to ourselves.  It is the voice that says, “it’s okay to feel scared or tempted to despair — but listen, it really is going to be okay.”  It is the voice that says, “you may have made a mistake – you may have spoken harmful words – but you can acknowledge what you did – know that to be a human is to make mistakes and to sin – and trust that in spite of your stumbling, you are still a beloved child of God and move forward.

Mother Teresa had a saying she would use when she encountered some poor wretch – wretched because their were diseased, dying on the streets, or wretched because they were cruelty and hate was seeping out of them:   “There is Jesus in one of his more distressing disguises.”