Jesus as Our Mother Hen with Wings Wide Open 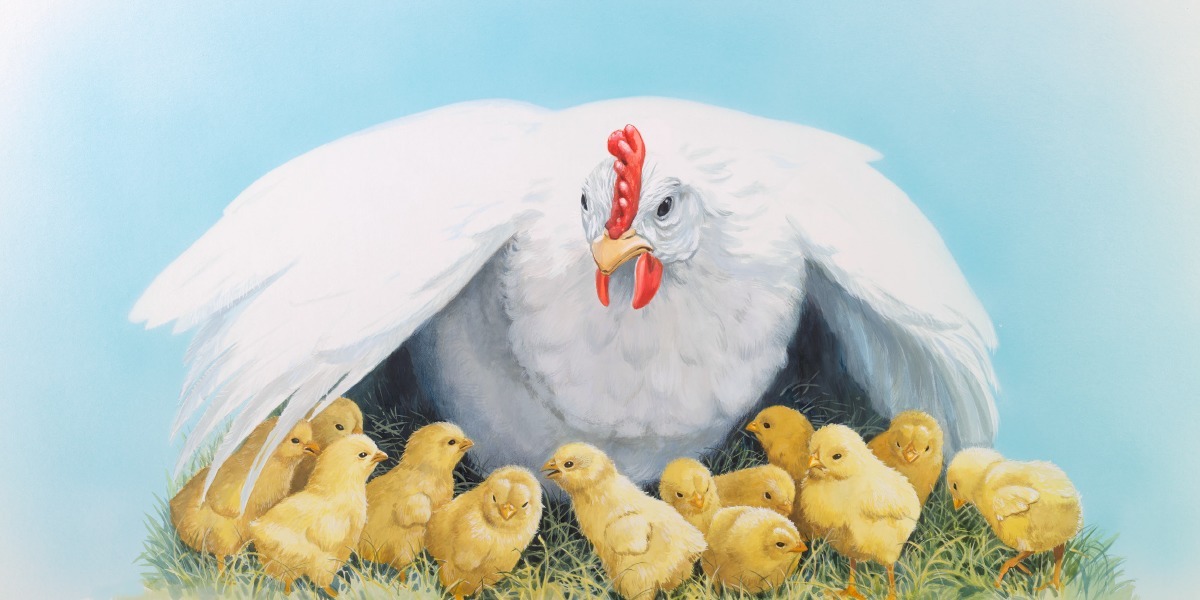 A sermon preached on March 17th, 2019 entitled, “Jesus as Our Mother Hen with Wings Wide Open:

These are distressing times we are living in.  Friday’ horrifying news about the 28 year old White Supremacist who opened fire in two different Mosques in Christ Church, New Zealand as children of God had gathered for prayer  is the most recent sign of our this heart-wrenching distress.  The shooter had first published an extended hate-filled diatribe and then videoed his bloody rampage Facebook Live.

He imagined himself to be courageous.  He was NOT an example of courage.  It is never courageous to close down one’s heart.

In this morning’s Gospel lesson, Jesus shows us what real courage looks like.  He is going to Jerusalem to confront the evil that is entrenched there.  He is warned by some Pharisees that King Herod, notorious for the violence of his regime, intends to kill Jesus.  Jesus won’t be deterred.    He is like a Red Cross worker going into war zone knowing the danger present.  People are hurting.  There are people who need healing and demons to be cast out.

He goes to confront evil but he will not engage evil to do so.  Jesus refuses to shut down his heart.  He openly expresses his grief and sadness.  He is like a mother hen who longs to gather her chicks under her wings, but we won’t be gathered.

There is a compelling argument for pacifism – the absolute refusal to engage in violence – in the example of Jesus.  Martin Luther King, Jr. was following in the example of Jesus when he famously said, “Returning violence for violence multiplies violence, adding deeper darkness to a night already devoid of stars. Darkness cannot drive out darkness; only light can do that. Hate cannot drive out hate; only love can do that.”

I honor people who are drawn to pacifism by what they see in the example of Jesus, but I am not a pacifist.  I recognize that there are times such as in World War II when people are compelled to use violence to defeat a greater evil.

I want them to be like Abraham Lincoln who, though confident in his decision to go to war, nevertheless walks the halls of the White House at night during the Civil War because he cannot sleep as his heart aches for the pain his decision the people of this land are suffering.

There are different ways to understand the nature of what the Bible calls “sin.”  One way is to think of it as hard-heartedness.  It is the wall that goes up that blocks our capacity for compassion.  It was the sin of hard-heartedness that allowed the priest and the Levite to pass on by the man lying half-dead at the side of the road, and compassion that led the Samaritan – the man considered an enemy – to stop and help him.

I spent most of yesterday at a special session of our Greater New Jersey Annual Conference of United Methodist called by our Bishop to begin dealing with the aftermath of the hurtful decisions of the General Conference that ended four weeks ago in Saint Louis that doubled down on the hurtful message of the official policies of our denomination in relations to the LGBTQ community.

Wisely the Bishop sought to keep the session become yet again a day of arguing between opposing sides, since arguing as such rarely changes anybody’s mind.  Instead he did at one point invite people to come to microphones to briefly share their personal stories.  Many people shared stories of how the church’s message of exclusion had hurt themselves or someone they loved.  Only one man spoke from the Traditionalist side – a story about a friend who had confided with him twenty years earlier that he was gay and how ever since he had been supporting his friend as he sought “to be faithful to God.”

There were two conclusions I came to from this.

The first was that the Traditionalists don’t really have stories to tell because to do so involves opening one’s heart up to human experiences of suffering. Traditionalists primary understanding of sin isn’t of hard-heartedness – they understand it as disobedience to their interpretation of Scripture.

The other conclusion, however was one that the Bishop called attention to, and that was that to some extent the Traditionalists didn’t feel safe to speak.  It seems clear that at our annual conference at least (and to what extent this is true out in various local churches I really don’t know) people who want to change the policy of our denomination to be more inclusive are a clear majority.  People who disagree with me in this belief about inclusion are also God’s beloved children of God, and they too need compassion, and I need to resist my temptation to close my heart towards them. How can we engage in open-hearted conversations on the subject?  This is an ongoing question for me.

When we hear terrifying stories like Friday’s the one on Friday with a White Supremacist shooting people in a Mosque, or the one a couple of years back where Isis members killed dozens of people in Paris, our first reaction naturally is to ask, how can we protect ourselves from the evil and violence of these extremists?

It is natural and appropriate to ask this question, but as Christians we are pushed to ask other questions as well?  What is it about our sin-sick world that leads young people to be drawn into Isis cells or White Supremacist groups?Is it possible they are the “canary in the cold mine” – the extreme examples of a sin sickness in our society at large?

Hatred and division has such a seductive pull.  We are all tempted to wall ourselves off – to become increasingly isolated from one another.

When we hear of such horrors, if we are to be faithful to Jesus we should hear a call double down in our efforts to walk in his way – that is the way of greater love.  On all levels:  in our families where the foundation of love is established in a person – to our church, work and civic communities – in relationship to strangers – and in relationship to what is ultimately the most distinguishing quality of Jesus’ love, the love of enemies.

Later in the Gospel story, as Jesus approaches the city of Jerusalem where he knows the crowds will turn against him and he will die on the cross, with his heart wide open he weeps over the city, lamenting that “if only you knew the things that make the peace.”  He does not turn and run for safety, nor does he wall off his heart from pain the pain his coming rejection is causing him.  This is what true courage looks like.

And so Jesus continues to be the Mother Hen who longs to gather her chicks under her wings.  The struggle between good and evil runs right through the center of our hearts in the choices we make in whether we will close down our hearts. The pull of this world to do just that is very powerful.

But there is a grace set loose in this world that can set us free from the need to harden our hearts.

This week we read a passage from the Apostle Paul who referenced all that he had left behind for the sake of Christ Jesus.  His backstory is one of hope in the power of grace.  He grew up as a self-righteous, law abiding Pharisee.  When he heard that there was this sect of Jews who were proclaiming that the messiah of God was a man who ended up nailed to a cross like a common criminal, he considered such a belief to be an abomination.  His heart was full of hatred and a desire to commit violence and began to persecute Christians.

But on his way to Damascus where he intends to lock up the Christians he finds there, in a great blaze of light, the risen Christ appeared to him.  “Why are you persecuting me?” Jesus asked.  Paul expected to be obliterated but instead he catches a glimpse of heaven and the amazing GRACE of God revealed in Jesus for all people.  His heart cracked wide open he leaves behind his hatred and violence and becomes the Apostle to the Gentiles, folks with whom he would not have previously let himself be in contact. He discovers that the clearest place to see the heart of God is in the utter vulnerability of a savior who allows himself to die upon a cross in a love that encompasses all. Afterwards he declares that without love we are noting more than a noisy gong or a banging cymbal.

We are citizens of heaven where there is nothing other than love but we don’t give up on earth.  We are called to be ambassadors of Christ who go about the ministry of reconciliation.

There are stories of people who were once upon a time hate filled White Supremists or hate-filled Isis members who underwent conversion of their hearts akin to the one Paul underwent and became people devoted to the work of reconciliation.  The stories are few and far between, but they speak to the possibility.

Will we let Jesus gather us under his wings?  That is what the church is – the community that has willingly gathered under the wings of the one who laid down his for all people.  Under his wings, there is always room in the circle.