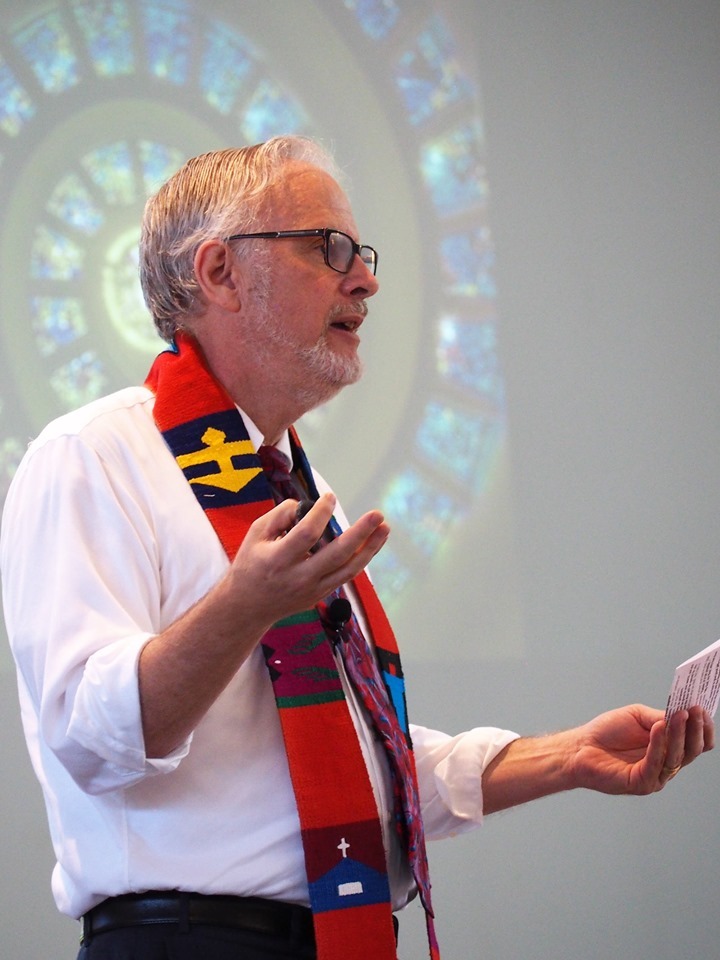 In their time together, the disciples could not help but note how often Jesus took time to pray.  They sensed that it was in his practice of prayer that Jesus received his extraordinary spiritual power, his centeredness in this restless world, and his remarkable capacity for love.  They wanted to be like Jesus.

And so they asked Jesus to teach them to pray.

In response to their request, Jesus gave them a shortened version of the “Lord’s Prayer” we find in Matthew’s Gospel providing actual words to pray, and in the words of this prayer we find basic guidelines regarding our life of prayer as Christians.

“Father,” he began, “Hallowed be your name.”  The actual Aramaic word he used for father was an intimate one never before used for Almighty God:  “Abba” meaning essentially, “Daddy.” Extraordinary intimacy, while at the same time acknowledging the holy otherness of God – that God alone is absolute holiness — the one around which life is finds its true center. To “hallow” God’s name is to return to that “quiet center” of which we sing every Sunday before we begin our time together in prayer.

“Your kingdom come.”  In God’s kingdom all people are valued and live together as one in love, and in praying for God’s kingdom to come we acknowledge that much of what transpires in this world is quite contrary to God’s will.  We pray for this broken and often cruel world, but in praying for the kingdom to come we also invite our own transformation, recognizing that there is much in our hearts and our actions that is out of harmony with the values of God’s kingdom.

“Give us each day our daily bread.” Jesus invites us to bring the ordinary concerns of our earthly life to God in prayer; to ask for what we need.  But this isn’t the prosperity Gospel.  The prayer invites discernment regarding what we truly need vs what we want but don’t necessarily need.  And it invites reflection upon the plight of those on this earth who go without basic necessities.

“And forgive us our sins, for we ourselves forgive everyone indebted to us.”  To engage in prayer is to invite God to soften our hardened-hearts; to receive the grace by which resentments, anger, and hatred are released.  In Luke’s Gospel, the business about “forgiving everyone indebted to us” also calls to mind literal debts, because in Jesus’ day as is often the case today it was through an unavoidable spiral of indebtedness that people became captives of poverty.

“And do not bring us to the time of trial.” There is here the humble acknowledgment of our frailty – that even when our lives are going well and we seem to have things under control all of us are always just a couple of steps from the great abyss.  So we do well to embrace a humble spirit, for pride cometh before a fall.

The request not to be led to the time of trial (which also can be interpreted “temptation”) invites reflection, because at the outset of the Gospels Jesus is described as being led by the Spirit into the wilderness specifically to undergo a time of trial or temptation.  The spiritual journey sometimes requires that we pass through some dark times after which on the far side we arrive at a great clarity.   But there is a difference between being mindful of the deep abyss to which life invariably draws us, and actually plummeting into the depths of that abyss.  It is the latter from which we pray that God will protect us.

The original temptation is to believe God is against us, not for us.  It is out of the fear of such a belief that evil arises.

So at the heart of prayer is the question of how we view God – the images we carry around inside us regarding God’s attitude towards us.  This is the link to the stories that follow Jesus’ words of prayer.

Perhaps nowhere is Jesus sense of humor demonstrated so clearly as in the little parable Jesus tells regarding a man who receives unexpected guests at midnight.  Most of Jesus’ listeners were poor and when the necessity of travel arose they surely didn’t have money for hotels, so they would rely upon the hospitality of relatives or sometimes strangers to put them up for a night. Since the land was arid and traveling by day under the hot sun could be unbearable, they would often do their actual travelling when it was cooler, beginning late in the day and walking well into the night.  So it was not uncommon for an unexpected guest to show up at midnight.

In the scenario Jesus conjures a man goes to his neighbor because he has no food to provide his guests, but the neighbor calls out from behind the locked door:  “Quit bothering me!  I am in here with my sleeping kids and can’t get up!”  But because the neighbor persists, eventually the grumpy, sleepy neighbor gets up and provides the bread to set before the impoverished guests.

The point of the story is that God is not a grumpy neighbor, but if persistence in knocking on the door of a grumpy neighbor will eventually result in the door being opened and the food begrudgingly provided, HOW MUCH MORE will God respond to our requests when we persist in our asking and seeking and knocking. Jesus continued with what would have been great hilarity for his listeners by conjuring up a human parent who in response to a child’s request for a fish to eat to satisfy her hunger gives instead a snake that would bite them, or a request for an egg to snack on by providing them instead with a scorpion to sting them.

It’s absurd, and yet if we human parents “who are evil” know how to give nourishment to our hungry children, HOW MUCH MORE will our heavenly parent give us good things when we ask.  That “evil” descriptor can be unsettling, but the point is simply that in spite of the inherent self-centeredness that is a part of all of us for the most part human parents are able to transcend this habitual self-absorption enough to give our kid a decent meal.

But the requests we make in prayer all happen in the context of an ongoing journey, and persistence is required.  Particularly with the impatience that is so much a part of modern living, we are disinclined to trust that answers to our prayers will come in time.  We want what we want NOW!  Sometimes, however we don’t really know what it is we need, and our requests are misguided.  Sometimes we aren’t ready to receive the gifts we need.

And sometimes the answer is no.  All that Jesus says here about prayer must take into account what Jesus himself experienced in the Garden of Gethsemene.  “Father, if it is possible, let this cup pass from me.”  Jesus did not want to be nailed to a cross.  He asked if there could be some other way.  There wasn’t, and Jesus finished his prayer, “Nonetheless, Father not my will, but thine.”

And on the cross according to Matthew and Mark Jesus cried out in desolation, “My God, my God why hast thou forsaken me?”  So even Jesus experienced the darkness where for a time it seemed as though he had been utterly abandoned by his heavenly Abba.

But it wasn’t the end of the story.  The resurrection was yet to come.

The final words that Jesus spoke that day about prayer are striking:  “If you then… know how to give good gifts to your children, how much more will the heavenly Father give the Holy Spirit to those who ask him!” In the end, beyond all the particular requests we may make of God, what we most need is God’s presence with us.  When we come to that final stretch of our earthly journey, when prayers for physical healing seem to have gone unanswered, what we will be given is God’s very self, and when we have received that final gift, all other gifts will pale in comparison.  In the meantime, God gives us the Holy Spirit – God’s very presence – as comforter, sustainer, and guide, leading us safely home.