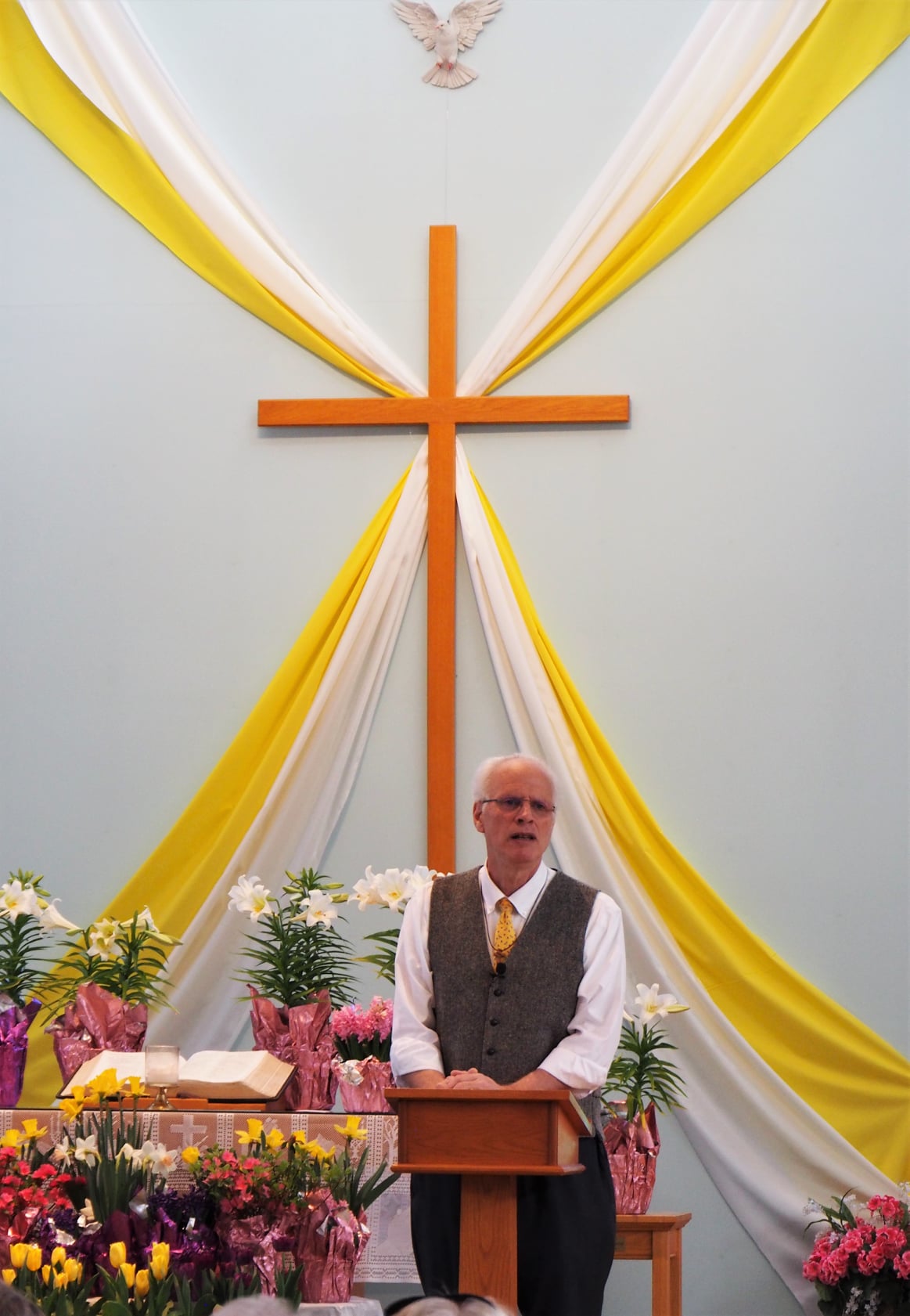 For a pastor/preacher like me, the Easter Sunday sermon is the Super Bowl of sermons, the biggest sermon I’ll preach in a year. There can be a lot of pressure to be inspired.

More people will be listening to this sermon than on any other Sunday, and for some of you perhaps this will be the only chance I have to cast a Gospel seed that might take root inside your heart.   There’s also pressure to be inspired because for various reasons folks are desperate to receive a word of hope, and we all know that Easter is supposed to offer hope, and so I better not lay an egg today, even though eggs are a thing on Easter.

So, I needed inspiration this week.

I noticed that inspiration is literally what Jesus did for those disciples hiding out behind locked doors that first Easter evening.  It didn’t seem like Mary’s words had inspired them.  They are still filled with fear, despair, and self-contempt for having let Jesus down.

And suddenly Jesus is there in their midst, and did you notice what he did?  He breathed his life-giving Spirit into them, so that his Spirit of peace filled the space in their hearts previously filled with fear, despair and self-contempt.

So, Easter is about inspiration.

In this regard, here is something else that caught my attention.

One moment Mary’s standing outside that tomb weeping – full of grief and despair – even though the one who waits to inspire her is standing right in front of her.  She is blind to his presence – mistakes him for the gardener.

The next moment her eyes are opened – she recognizes Jesus and is freed from her despair.

The same outward reality – in both instances, Jesus stands right in front of her. The difference is in Mary herself – two distinct state of minds.

How would we describe Mary in the first state of mind?  Well, she’s closed down – she’s tight – she’s clutching – she has tunnel vision.  She has identified a task she must accomplish, and her attention is solely focused on this task, and this narrow focus results in her being blind to Jesus’ presence.

The task Mary has identified for herself is to find the dead body of Jesus that someone has apparently taken away somewhere.  She wants to anoint that body and give it a proper burial.  The irony is she is so desperate to find Jesus’ dead body that she can’t see his living body standing right in front of her.

And then a single word from Jesus – he speaks her name – awakens her – opens her up.  She enters into another state of mind which is all the things the first state of mind isn’t.  She has an open heart and an open mind.

In 41 years of preparing to preach, I have come to recognize these two distinct mindsets in relation to preparing a sermon.  It took me years to realize that when I enter Mary’s first mindset, trying to find inspiration for a sermon just isn’t happening.  I need to somehow find my way to that second mindset.

As I’ve talked about before, the best way I’ve found to enter into that second mindset is to go for a walk in the woods.

So, this past Monday I spent an hour or two reading over this familiar story and reading commentaries on the passage.  This is important thing to do, but I realized that it hadn’t led me into that state of mind I needed, so I drove over to Old Troy Park.

It was a beautiful Spring day and as I began to walk through the woods, I could feel something begin to shift inside me – a kind of internal “letting go”.  In my mind I went over the familiar story of how Mary came to the tomb and finding it empty, ran to tell the male disciples and how two of them came running to check out the tomb, finding it empty as she had said.  The two disciples left and then Mary looked inside and saw two angels, who asked, “why are you weeping?”

I arrived at the pond — the pond where Al Booth used to take our Sunday School kids fishing every June – sort of sacred ground for me — and was delighted to find these two big birds (Susan Elbin tells me they were probably cormorants) sitting together on a big branch that rises up out of the water not far from the shore.  I thought, “Wow, that’s cool.” 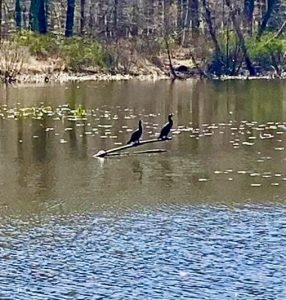 I sat down on the bench and just watched them for a good long time, wondering, “now are those two birds the two disciples or are they the two angels?” I was definitely entering pretty deeply into that open heart, open mind space.

Finally, one of the birds flew off and right after it did, this Big Egret came out of the bushes and flew right above the bird that was still sitting on the branch.  And I thought, “wow – that’s got to be Jesus.” 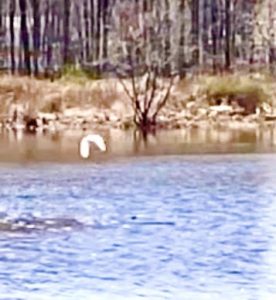 I spent another thirty minutes just sitting there watching as the three birds seemed to be putting on a show for me, taking turns soaring around in big wide circles around the circumference of the pond, flying by me when their circle brought them close to where I was sitting.

Finally, one of the birds broke the pattern, ascending higher and higher, up towards the sun so it was hard for me to see it for the brightness of the sun.

And I thought about what Jesus said to Mary, “don’t hold me, because I’m ascending to our God.”

Somewhere sitting there in this openhearted state of mind, I thought about someone I’d been feeling disconnected to – hadn’t talked to in a while.  It felt like we’d been drifting apart from one another and I made a mental note in my open-hearted state to give them a call which I did before I left the park, and we had a nice talk.  It felt like Jesus had nudged me to do that.

So, after sitting by the pond a good long while I decided to get up and finish my walk through the woods.  Now I’ve walked in this park say, 500 times over the years. A couple of years ago I had two fleeting glimpses of a fox which were pretty cool and afterwards it became a sight I would hope to see each time I came walking in the woods, but foxes know how to keep themselves hidden and I never again saw a fox there, that is until this past Monday. And this time I saw the fox well before it saw me (so I was kind of like Jesus and the fox, like Mary).  I saw it coming down the path towards me and I just stood there very still and when the fox got to about ten yards from me, it suddenly spotted me.  And then it made a big wide loop around me – sort of like the loops of the birds – keeping its eye on me the whole time. 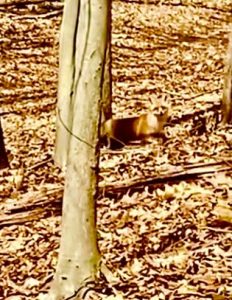 This was far and away my best fox encounter in all my years in the park.  Magical really.

I have quite a peculiar imagination.  One of the things I’m grateful for as I reflect upon my years here at this church is you’re given my peculiar imagination your blessing – gone with me to all those weird places my plays took us.  A lot of churches wouldn’t have been so open minded that way.

Well, maybe it’s just my fanciful imagination, but it felt to me as though having entered deeply into this other open-hearted, open-minded mindset, space was opened up that made it possible for God to send that fox to me for the purpose of a goodbye blessing as I begin to say far well to my beloved park.

When I got back to the pond, I found two turtles sunning themselves on a rock near where the birds had sat. 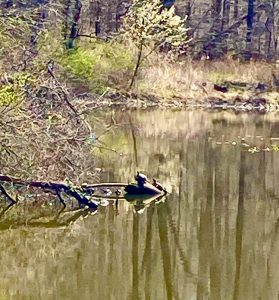 These two turtles – they must be the two disciples – sometimes withdrawing, sometimes coming out to warm themselves in the sunlight of God’s love.

Monday wasn’t the end of my weird wildlife encounters.  I saw this lone wild turkey crossing the road as I headed out to Saint Gregory’s for the Cross Walk on Good Friday.  He looked sort of like he might be the devil. 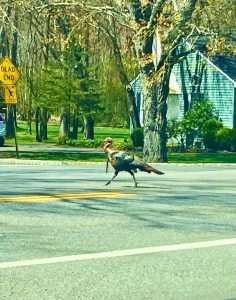 So, I’ve been pondering about what other wonders and delights I might be given glimpses of if  I spent more time in this open hearted state of mind.

Because the truth is, you and I – we spend most of our time in a state of mind closer to the one Mary began in – closed down, in tunnel vision – with particular tasks we’re locked in on.  I think children spend more time in that open-hearted space, which was what Jesus meant when he said we have to turn and become like a child to enter the Kingdom of God.

Jesus is trying to in-spire us, but the state of mind we live is making it hard for him to reach us.  What would it mean for you to let go of your tight grip on life?

So, opening ourselves up to the inspiration to the risen Christ is the primary thing I’ve wanted to talk about, but something else I heard in this week in this story and that is a call to courage.

Notice what Jesus says to Mary when she suddenly recognizes him:  “Don’t hold me.”  Apparently, Mary had reached out to hold Jesus – to clutch him.  What does this mean?  Mary wants to have things go back to the way they were before Jesus was crucified, or perhaps she wants to hold onto this present moment and not let go.  Either way, she isn’t open to the future because it involves change and that can be scary.

But we can’t hold on.  So, we need courage.  And that can be scary.

There is an immediate connection here for me, as well as for you.  I am retiring in two months.  I will be letting go of the life I have had with you, the identity of pastor I’ve carried, the weekly patterns that have given my life structure.  I’m looking forward to retirement but it is not without fear.  And fear can lock a person up the way it did those disciples in that upper room.

And you will be letting go of me as your pastor who you’ve had so long, and welcoming Marissa as your new pastor.  And there can be something scary about that as well.

We need Resurrection courage.  So that’s why I like Johnny Cash’s song, “Ain’t No Grave Can Hold My Body Down” which the Motley Crew Christian Band performed this morning.  It’s about Easter courage.  It’s about claiming the truth that if a grave didn’t hold Jesus’ body down, and then ain’t no grave will hold our body down either.

We don’t know what the future holds, but we know who holds the future.  And that means the future will be good in spite of what challenges it may bring.  The risen Lord awaits us in the future as well as in the present.

If what we declare this morning really is true – that God has raised Jesus from the grave, that the power of death and sin has been overcome – then something is required of us.  We are called to embrace Easter courage.  To try and live a life that is in greater harmony with this truth, which means challenging the fears that would lock us up in that upper room where the disciples were before Jesus came to them.  It requires we look at what scares us and try as best we can to let go our tight grip that is our knee jerk reaction to stuff that scares us — to trust that Jesus is indeed with us, come what may.