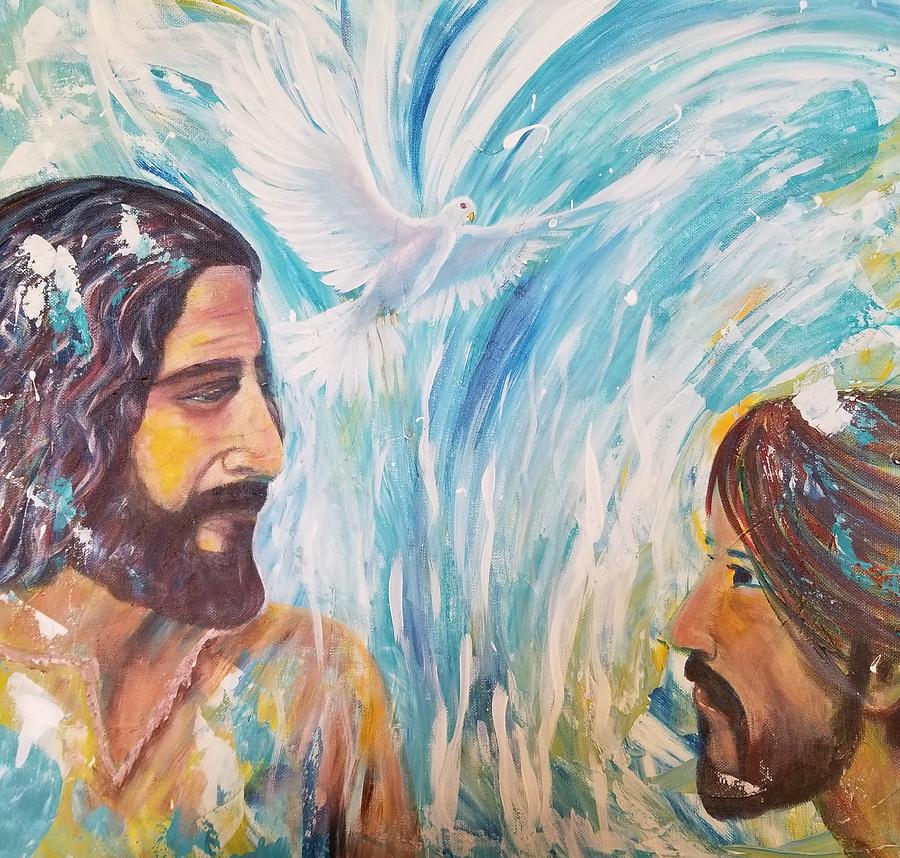 I’ve always found it remarkable that all four Gospels take so much time to tell the story of how the disciple Peter crashed and burned the night of Jesus’ arrest.  There aren’t that many stories that occur in all four Gospels, but they all include this one, told pretty much the same way.  If the Gospels were merely promotional tracts appealing to the wisdom of the world, they would have had Peter – the leader of the early church – come off a lot better.

Instead, we hear how at the Last Supper when Jesus told his disciples they would all fall away that night, Peter arrogantly declared he wouldn’t, comparing himself to the others in a way that implied he would be quick to judge them for their failure to hang in there with Jesus in his hour of need.  Later that night, while Peter stood by a charcoal fire to try and warm himself, we hear how not once, nor twice but three times he denied knowing Jesus, just as Jesus had predicted.  We hear how after his final denial Peter collapsed in a puddle self-contempt, ashamed of his failure to stand true to Jesus. Where he had been quick to judge the other disciples, now Peter was quick to judge himself.

You could say that Peter was broken that night, but the truth is he had always been broken.  It would be better to say he was broken open that night – forced to face his inner brokenness.

The truth is, we’re all broken.  That’s what is expressed in the story of Adam and Eve losing the harmony of the Garden of Eden.  We were designed to live our lives out of an intimate relationship with our Creator at the center of our being, but that relationship has been broken, which in turn leads to damage to all the other relationships of our lives – to other human beings, to the creation, and to ourselves.  There is a kind of civil war going on inside each of us – the battle that Peter experienced that dark night between that part of himself that wanted to do the right thing and the part of him that simply wanted to survive.  It’s the struggle the apostle Paul described when he wrote, “I do not understand my on actions.  For I do not do what I want, but I do the very thing I hate.” (Romans 7:15)

And although we are all broken, just like Adam and Eve sought to hide their brokenness from God, and Peter was forced kicking and screaming to acknowledge his brokenness, so we tend to be loathe to acknowledge the ways we are broken.  In part it has to do with “The Emperor’s New Clothes” phenomenon – most everybody else seems to be doing okay, we better keep up a good front as well.

Only the grace of God – revealed most clearly in Jesus — can begin to fix us.  And in this life, the “fixing” that grace makes possible is only partial.  Our best hope is through God’s grace to be set on a journey of transformation (sometimes called “sanctification”) that finds its completion when we reach heaven.  In the meantime, we remain broken – always a work in progress.

Of the four Gospel writers, only John takes some time to tell the story that is implied in the other three and that is how the grace experienced in Peter’s encounter with the risen Jesus began this process of transformation in his life, and that’s the story told in this morning’s Gospel reading.

We read that following Jesus’ death and resurrection Peter was functioning in the role of leader of the church, but he wasn’t doing a very good job — presumably because he didn’t feel worthy to take on that role.  He decides to go fishing – something he figures he knows how to do – something that expresses a focus on mere survival — they have to eat, after all.  But even this thing that Peter knows well how to do doesn’t go well as he and the other disciples spend a whole night casting their nets without catching any fish.

As morning breaks, the risen Jesus appears on the shore, unrecognized.  He has the disciples cast their nets down yet again, and this time they catch a great many fish, and suddenly they know it is Jesus.  Peter and the others rush to shore where Jesus has prepared breakfast for them.  They are fed by Jesus, and then afterwards, beside the charcoal fire (a reminder of Peter’s denials) Jesus sits down directly in front of Peter and asks him three times if he loves him.  It’s painful for Peter, which is to say it is painful to be forced to look directly at one’s own brokenness.  It can be enormously painful, but it is necessary if we are going to be transformed.  Peter is given three opportunities to profess his love of Jesus to match his three denials, with the implication that in this ritual he is forgiven.  And with each profession of his love, Jesus tells Peter to feed and tend his sheep.

In order to feed and tend Jesus’ lambs, Peter has to personally know what it is to be fed and tended by Jesus in his own great need – most conscious of his own apparent wretchedness.  If he is to be a vessel of love and forgiveness to others, it is necessary for the grace of God to break the cycle of self-contempt and contempt for others.

Having been fed this way, Peter will embrace his identify simply as one beggar telling other beggars where to find food.

As I approach the end of my formal ministry as a pastor, I find myself doing a lot of reflection on my life. I grew up in what is often called a “broken family.”  All families are broken to some degree – “dysfunctional” is the psychological term often used – but my family was particularly so.  I don’t believe my parents every truly loved one another.  When I was going into seventh grade, they announced that they were getting divorced, which came as a surprise because I’d never seen them fight, but for that matter, I’d never seen them show affection to one another either.  The brokenness had always been in my family blew wide open.

Not having grown up in a family that had a loving marriage at the center, I carried a wound with me that I was loathe to acknowledge.  Like Peter, I wanted to view myself as stronger than I was.  My spiritual journey led me to seminary and ordination.  I believe I had a legitimate calling to the ministry, but part of the appeal of being a pastor had to do with my misguided understanding of the nature of pastoral ministry.  I assumed pastors were strong people that weak relied upon, and I wanted to view myself as strong in this way.

There was a quality of arrogance to my brokenness, and on some level this led me to pass judgement on my parents. I would make sure when I got married that my marriage succeeded and that my children wouldn’t have a “broken home” in which to grow up.

Forty years ago, I took my first pastoral appointment out of seminary.  My personal form of brokenness left me feeling particularly lonely, and two years into my appointment, unable to fully acknowledge my woundedness I impulsively got married assuming that “falling in love” was all that was required to base a marriage.  The marriage was in trouble from the start.  Less than three years after the marriage began, my wife moved out of the parsonage.  By that time my son Andrew had been born – he was not yet one year old.

I was broken open, and I was humbled.  What I had vowed I would never allow happen did in fact happen.  My son would grow up in a “broken home.”  I realized that there are forms of brokenness that simple determination can’t overcome.  I let go of the arrogant resentments I had quietly carried towards my parents for failing to provide me with an intact family in which to grow up.

My first congregation had known me for five years when the dissolution of my marriage was announced.  Having come to know me over the years they loved me and conveyed to me God’s grace in my time of need.

I arrived here 33 years ago just two years removed from my wife moving out of the parsonage.  Folks here didn’t know me from Adam.  I was surely the strangest pastor a bishop had ever sent here in the church’s 170 year history – the first divorced pastor, and one with half time custody of a two and a half year old son, not yet out of diapers.

I am quite certain that the majority of congregations at that point in time would have said to the bishop, “No thanks, we don’t want this guy.  He’s a mess.”  But this church embraced me.  Folks like Hwa Chun and Betty Polen helped me care for Andrew.

If I asked why I stayed here all these years, part of the answer is that I found in this congregation something of the sense of family I had missed out on in my family of origin, and for this I am very grateful.

During my time here I had the opportunity to try again at marriage.  For nearly twenty-nine years through the grace of God Sarah and I have managed to create a marriage that works, learning through the years how to love one another even as we are quite conscious of our ongoing brokenness.

So here thirty-three years into my time at Parsippany United Methodist Church, I am still a broken man.  I am, I believe a less arrogant broken man, and therefore able to love better than I did at the outset of my ministry.  I am, you could say more comfortable with the fact of my brokenness.  I recognize, just like everybody else – I need a savior – I need Jesus.

So, the story of Peter has become all the more meaningful to me over the years.  We are just beggars telling other beggars where to find food, which is in Jesus.  The church is a hospital for sinners, not a club for the already sanctified.  It’s a place where we can acknowledge the lie expressed in the Emperor’s New Clothes.  We are all broken, but that’s okay.  We know the one who loves us in our brokenness.  We know the one who this morning, once again invites us to breakfast.