Matthew 12:2-12 — John the Baptist’s Despair and the Joy that is Present in Sorrow 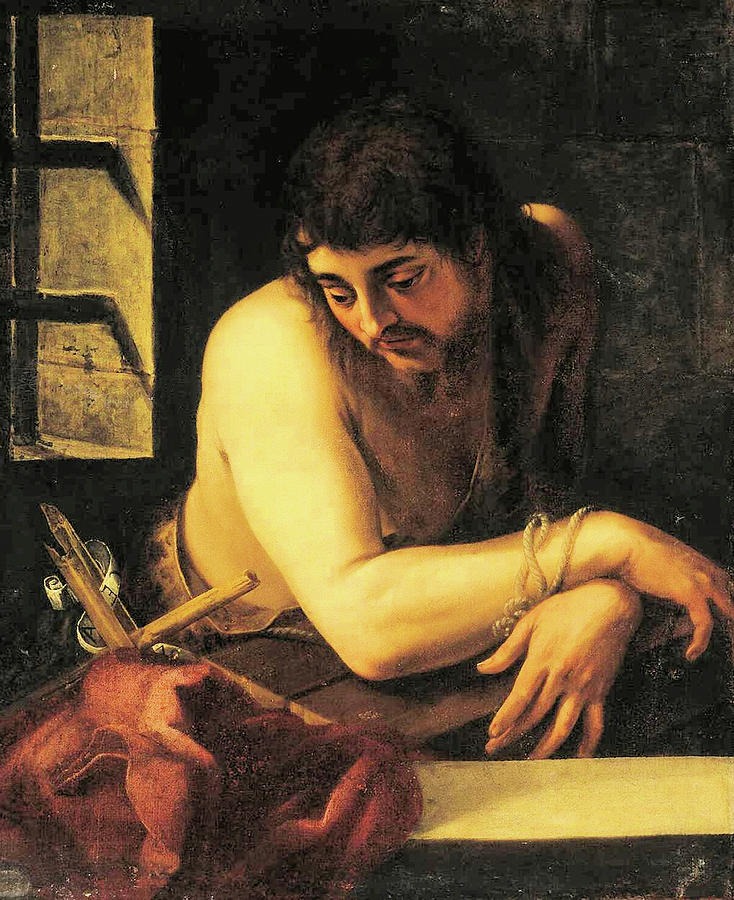 A sermon preached on December 15th, 2019 based upon Matthew 12:2-12 entitled “John the Baptist’s Despair and the Joy that is Present in Sorrow”

This is a striking little story.  Last week we heard how John the Baptist commanded the stage immediately before Jesus’ first appearance in the Gospel in his adult ministry.  John appears out in the wilderness proclaiming that the Kingdom of Heaven is at hand.  There is no uncertainty in that appearance.  The crowds flock to the river to be baptized in preparation for what John has no doubt is on the verge of taking place.  He speaks of the fire that is coming; an axe that will chop down the perpetrators on injustice.  He lets the self-righteous Pharisees and Sadducees have it, calling them a “brood of vipers”.   And when Jesus came down to the River Jordan there was no doubt for John as to who it was that stood before him – the one whose sandals he was unworthy to carry.  This was the Messiah, the Christ, the one for whom he is preparing the way, the one who with a holy fire and righteous judgment will fulfill what John has prophesied.

That day by the River Jordan there was only one moment when the slightest bit of confusion and  uncertainty arose for John:  when he realized that this Jesus was standing in line with all the others waiting in utter humility to take his turn to be baptized by John – just like all the others.  He tried to stop him, but the messiah had insisted.  Perhaps that moment should have clued John into the fact that his grasp of what God was up to wasn’t nearly as clear as he had thought.

In this morning’s story some time has passed and John’s life has taken a distressing turn, though not a surprising one for somebody who dares speak truth to power.  King Herod has had him arrested and placed in a dark prison cell.  In short order, it will be John who meets the axe when Herod has him beheaded.

John’s disciples have kept him informed about what’s been happening in the outside world.  Although Jesus’ ministry has drawn much attention, it hasn’t brought about what John had prophesied.  The people perpetrating injustice – both the Roman oppressors and the corrupt religious leaders – are still in power.

In the darkness of his prison cell, John has begun to have serious doubts.  Had he been mistaken regarding what he had once been so certain – that this Jesus was the long awaited messiah?    He is tempted to despair.  And so he sends a delegation of his followers to Jesus with a simple, understated question:  “Are you the one who is to come (as I have been telling anybody who would listen), or are we to wait for another?”

Who among us has not known something of the despair that is expressed in John’s question?

We have a vision of the future, of how things we think will work out — should work out. And for a time it seems like they are doing just that.  The sun is shining brightly.  And then things begin to fall apart.  The hope we had collapses and we descend into the deep darkness.

Despair comes.  It can happen in so many forms.

So John speaks for all of us in such times as he asks that question of Jesus.

Jesus answers John’s question by pointing out the things that are taking place in Jesus’ ministry.  In contrast to the big things John was looking for – the full coming of God’s reign on earth – the driving out of the perpetrators of injustice – the things Jesus points to are relatively small things, though large in individual lives.  People are receiving healing and hope – signs spoken of long ago by the prophet Isaiah.

One lesson to take away from John’s despair in his prison cell is to recognize that we are setting ourselves up for despair when we claim to know exactly what God should be up to in our lives and in our world.  John had it right when he saw that the old order of things was terribly corrupt and that everybody had a hand in this brokenness and all needed to repent — turn toward the light and away from the darkness.

But John had it wrong in imagining that new order would emerge through the mighty hand of God burning up all the chaff.

There is a parable Jesus tells elsewhere about servants of a farmer who come to him upset when they discover that although the farmer planted good seed in his fields, weeds are now growing side by side with the wheat.   The servants offer to begin yanking out the weeds for their master, but he tells them to chill.  In their zealous passion to pull out the weeds they likely will pull out wheat in the process.  Let God sort it all out in the end.

We often aren’t a good judge of what are weeds and what is wheat.

Perhaps you’ve had the experience of looking back on a time in your life that was deeply distressing – a time when if you had had one you would have waved a magic wand and had the circumstances contributing to your hard time instantly removed.   Later though, looking back you realized that good things happened in your life that wouldn’t have happened otherwise –– perhaps in particular transformations that took place on the inside of you – changing you in important ways for the better.

The things that Jesus points to in his answer to John are all acts of love.  There is this recognition that we are all in this together, and that the solutions to our problems are not found in magic wands but rather in recognizing that deep underlying connection we have together – the love with which God has knit us all together.

If the purpose of life isn’t to triumph but to learn how to love – to have our hearts softened – then the brokenness of this world is somehow necessary.  We are given infinite opportunities to keep practicing love.

The third Sunday in Advent traditionally includes the theme of joy.  Joy abounds in this world, but like the weeds and the wheat, it resides side by side with sorrow.  The trick in life is not to miss the joy that is there right in the midst of the sorrow.

The great and popular Christian writer, CS Lewis entitled his autobiography, “Surprised by Joy.”  In it he reflects upon intense experiences of joy that had come unexpectedly to him throughout the course of his life, ever since childhood.

He realized that in a peculiar way joy as he was defining it was an unsatisfied desire – a deep, longing of the soul which when we are in touch with it is better than any human happiness.  When he asked himself what it was his heart was desiring at such moments he could not find anything in this world which would provide the quenching of this desire.    A highly rational man, it didn’t make sense to Lewis that he could have a desire that for which the object of the desire did not exist.  He came to the conclusion that the longing of his heart that was joy was a longing for God.

It is the longing of which we sing in the greatest of Advent hymns:

That mourns in lonely exile here

Until the son of God appear.

Shall come to thee, O Israel.

Notice that the joy of the hymn is referenced as a present possibility even as we are longing for the fulfillment of God’s reign in this  very broken and tear stained world.