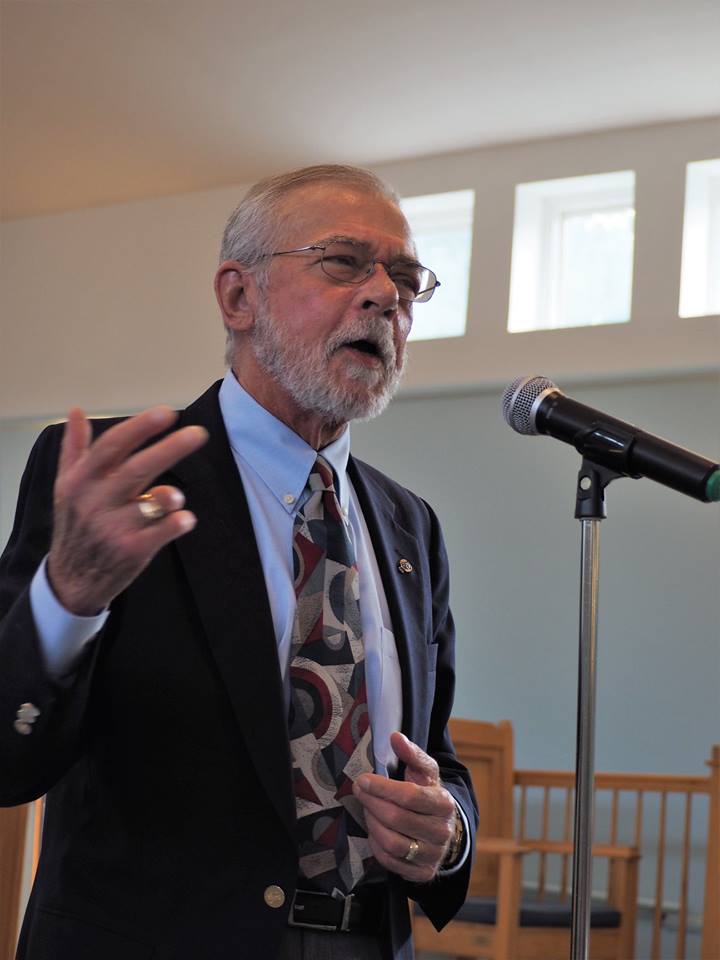 “Offer them Christ, Thomas.” These words are said to have been John Wesley’s, the founder of the Methodist Church, last words to Thomas Coke as he stood on the pier, sending Coke off in mission to America.

As part of that mission, Thomas Coke was to ordain Francis Asbury and others into ministry. These faithful missionaries, Coke and Asbury, did just that: they offered Christ, resulting in a movement of astronomical proportion.

The movement was alive! It was growing! It was responsive to the biblical mandate of “go therefore and make disciples of all nations, “

When Coke and Asbury agreed to serve in mission, to go and make disciples through “offering Christ” so others had an opportunity to make a commitment to Jesus, they gave their lives in a mode of humble service.

Recall what Jesus had said to the early disciples: “For the Son of Man came not to be served but to serve, and to give his life a ransom for many” (Mark 10:45, NRSV).

Coke and Asbury did indeed go into the world in outreach and mission, offering hope and using the method of Methodism to make disciples through proclamation of the gospel, seeking, welcoming, and gathering as they offered (and received) hospitality to (and from) those not yet in the body.

They offered Christ by providing opportunities for people to commit their lives to God and nurtured them in Christian living to help them find a true sense of purpose in life, as they learned what it means to live out their beliefs through participation in the means of grace; then they sent them out through engagement with the world to be disciple-makers themselves by again offering and receiving hospitality.

Both Coke and Asbury provided leadership for this methodical system of discipleship. Through the ministry of the laity, more and more people made a commitment to Christ, were nurtured in the faith, were equipped for ministry, and were sent out to be in ministry with others.

The movement was alive because the partnership ministry of the laity and the clergy was also alive.

If we are to reclaim the movement and truly see all the people, we must be harbingers of HOPE—the core process of discipleship, the method of Methodism:

On Laity Sunday, we celebrate that we are all called, laity as well as clergy, to go and make disciples in a world so desperately in need of hope through our humble service. Jesus modeled the process for us in Mark 10:45, and Thomas Coke and Francis Asbury lived it out in their own lives. Therefore, we should go, too!

Ambition is a double-edged sword.  It can be healthy, of course, but it can have a dark side, too.

Let’s look into the faces of James and John from the Gospel lesson that Anna read for us today.  We may see that they mirror at least a part of our own lives.  Just maybe we can direct our ambition toward something more noble than having the best seats in the house.

So let me ask – Are you ambitious?  Of course you are.

It is what parents try to instill in their children from the earliest age:

You can do it, honey, just keep trying.

Just a little more practice and you can be even better.”

Ambition motivates us.  It’s what gets us up in the morning.  It’s what makes us want to do our best.

In the Book of Genesis we are told how God took a lump of moist clay and fashioned it into a man. He then blew into his nostrils the breath of life and the clay became a living being. (Genesis 2:7)

The word translated as “living being” is the word, “nephesh,” (NEH-fesh) which literally means “a bundle of appetites.”

We are all living beings; a bundle of appetites.

This bundle of appetites stirs a hunger within us.

It’s a hunger to savor the goodness of life, to flex our muscles, to prove our ability to accomplish great things.

A healthy appetite .is essential to good health and it lies at the heart of healthy ambition:

We hunger for things we don’t have and that hunger drives us to excel and to want more.

We want a more prominent position, a better salary, a more comfortable home, a good name in the community.

And once firmly established, this pursuit of excellence will stay with us for a lifetime.

Students study hard for good grades because they want to be recognized.

Young adults put in long hours because they want to receive recognition .and, hopefully, move up the ladder.

Middle-aged adults save and invest their finances so they can enjoy a comfortable retirement.

Ambition is that force within us that compels us to strive to reach our God-given potential.

Unfortunately, there is also a dark side to ambition. It’s called greed.

Greed. Instead of wanting to do something with your life to the glory of God, you pursue what you can get for yourself. And the more you get, the greater the need.  More is never enough!

Left unchecked, greed is like a cancer. It grows and spreads and infects everything it touches.

And this leads to an addiction.  No matter how much you have, it is never, ever quite enough.  And it doesn’t make any difference whether it’s a hunger for power, for prominence or prestige or for worldly possessions,

Once greed takes hold of ambition, it corrupts it, and then kills it.

Many of you know I used to work in the oil business.  Do you remember a man named Kenneth Lay?  He was the founder and CEO of a company called Enron.

Lay grew up in Missouri, the son of a part-time Baptist preacher and his family was dirt poor. But Lay was ambitious.

He managed to earn a Bachelor’s degree from the University of Missouri and he went on from there to land a job with Exxon in Houston.

He went on to a government position as a federal regulator and he soon became an undersecretary in the Department of the Interior.

Talk about a rising star!

When the federal government deregulated energy, Lay returned to the private sector and formed Enron.

It quickly became a darling of Wall Street.  Its stock soared.  Investors could not get enough of it.

Then it all fell apart.

Lay and his executives were falsifying reports, cooking the books to exaggerate earnings.

Now Lay’s friends would say that he was a good man, at heart.  But something went wrong.

Instead of enjoying the fruits of success, unhealthy ambition got the best of him and he was convicted of fraud and conspiracy.  He would have gone to prison, but he died of a heart attack while awaiting sentencing.

There is a dark side to ambition.   Its name is greed.

You see greed every time a person steps in front of another person in an effort to get ahead.

And that is the issue that James and John brought to Jesus:

They said never mind the others.  Just take care of us and give us what we want.

That is the dark side of ambition!  When we want preferential treatment and we’re willing to step on, or over, others to get it.

But Jesus handled this request with such a caring heart when He said,

“You don’t know what you are asking…… Are you able to drink the cup that I drink, (probably referring to the same cup that he mentioned in His prayer at Gethsemane) and to be baptized with the baptism …that I am baptized with?”

Our Lord is clearly referring to the sufferings which He will be plunged into, baptized into, at the Cross.

As one ponders over our Lord’s answer, one cannot help but see the patience, kindness, and love which is exhibited by Him to James and John.

The Lord went on to share with them, “You shall indeed drink the cup that I drink, and you shall be baptized with the baptism that I am baptized with,  but to sit at my right hand and at my left hand is not mine to give, but for whom it has been prepared.”

As we know from the Scriptures the words of our Lord came true in the case of these two disciples.

We all want various things out of life. We all have ambition.

The issue is: How will we relate to others in the process?

We are all called to be a part of the Body and we should be ambitious to be all that God has called us to be in the Body.

We can be ambitious, but not at the expense of a servant heart.

We are called to be a servant to all. A Salvation Army Captain once said “The measure of a man is not how many servants he has, but how many men he serves.”

I’d like to close with this story of a track meet.  It was a meet for special needs children.  Some had physical while others had mental challenges.

The climax of the day was the quarter mile race.

The contestants lined up, the starting gun sounded and they were off.  Everything went well until they got to the final turn.

One of the contestants stumbled and fell.

As soon as the other runners realized what had happened, they turned around and went back to the fallen runner and helped him to his feet.

Then, arm in arm, they limped together toward the finish line.

As the herd of runners passed in front of the crowd, everyone, every single person, got to their feet to cheer.

No one cared to notice who actually crossed the finish line first.  What difference did that really make?

What mattered was they finished. Every last one of them completed the race.  No one was left behind.

When your ambitions turn from satisfying your own wants to attending to the needs of others, to be a servant to all, that is the mark of Christian Maturity.

For you want no-one to be left behind.

Say it with me:  Christ has died.  Christ is risen.  Christ will come again.         And when he does He will gather His own unto Himself.

Don’t let anyone be left behind in your ambition.  Offer Hope.  And as John Wesley said, “Offer them Christ.”