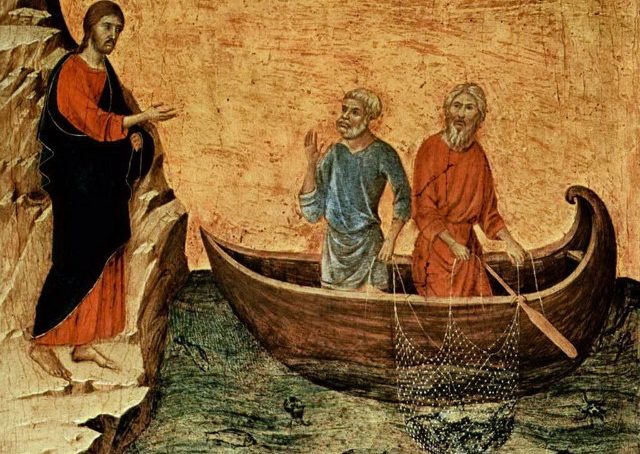 As I mentioned last week, each Gospel writer has distinctive ways of presenting the story of Jesus with particular themes on which they focus. One theme Matthew highlights is the conflict between God’s kingdom (reign) and the kingdoms of this world (which in Jesus’ day focused on the Roman Empire.)  In God’s kingdom every human being is cherished, love is the currency and there is always room in the circle.  In the kingdom’s of this world worth is quantified by one’s place in the ladder of status, and fear is the primary motivator.

In Matthew’s Gospel this theme arises right from the start when we hear how the news of Jesus’ birth leads King Herod to do the “shake in his boots with fear dance”.  Threatened by the coming of God’s reign and its disruption of the status quo, Herod lashes out with brutal violence to try and kill the infant Jesus.

John the Baptizer comes announcing the arrival of God’s kingdom, inviting people to be baptized as a sign of their desire to re-aligned with God’s reign.  Jesus is baptized by John, and as he does hears God declare, “This is my beloved child, in whom I delight.”

When we are living in alignment with the Kingdom of God, the fact that we are children of God is our deepest identify.

Immediately afterwards Jesus spends forty days in the wilderness. In Matthew’s version of the story the climactic third temptation by the devil Jesus is offered the position of top dog in all the kingdoms of this world.  Remembering the One to whom he belongs Jesus turns his back on the devil’s offer.

Our reading follows the temptation story and in the first verse we are reminded that the kingdoms of this world use the threat of violence to silence those who would question allegiance to their authority.  John, we are told is locked for his audacity.

Jesus takes off where John left off, proclaiming the good news of God’s Kingdom, bringing its light into the darkness of the kingdoms of this world.

Later we will be told the brutal story of how John ends up beheaded, and of course, of how Jesus ends up crucified.  These acts were meant to induce fear in all who would consider challenging the authority of the kingdoms of this world.

At the end of Matthew’s Gospel, the story of the Jesus’ resurrection is told in such a way as to emphasize that in the end, God’s kingdom will triumph.  Roman soldiers are deployed at the tomb in which Jesus’ body is buried, and when an angel descends and the tomb is broken open, the soldiers tremble (like King Herod at the outset) and become like dead men.  If the threat of death is ultimate weapon by which the kingdoms of this world keep suppress God’s kingdom, it is indeed terrifying to the powers in charge if a man executed for challenging their authority rises from the dead.

So with this overview of the conflict between the Kingdoms of this world and God’s kingdom we come to the famous story of Jesus calling the four fishermen.  Typically we misinterpret this story.  We imagine ourselves in the fishermen’s sandals and quickly conclude that we wouldn’t have had what it took to suddenly leave everything to follow Jesus.  But this story isn’t about how extraordinary the fishermen were.  Quite the contrary, a consistent theme throughout the gospels is just how ordinary the twelve disciples were.  They weren’t the best and brightest.  They weren’t particularly brave.

This story is ultimately about Jesus rather than the four fishermen.  There was something so compelling about his personal presence that made it possible for these four very ordinary men to take the extraordinary step of following him.  In our common place interactions in this world, the depth of who we are – our souls – are not recognized. We are merely the cogs of the kingdoms of this world.   But Jesus had the capacity to immediately make a “soul connection” – and whenever this happens there is the exquisite experience of joy.  They experienced in Jesus a quality of aliveness that was intensely attractive – a kind of love that wasn’t clingy but infinitely expansive.  A quote by Monica Helwig came to mind:  “Jesus lived as if God reigned and none else had power over him.”  The fishermen immediately sensed they were in the presence of the first truly free man, and found themselves longing for that same freedom for themselves.

In following Jesus, they were initiated into a process of transformation.  Although we humans are made for the Kingdom of Heaven, a powerful dark force keeps pulling us back into the orbit of the kingdom of this world.  In the course of the Gospel story we often hear Jesus challenging his disciples to live out of their faith rather than their fear, the currency of this world.  When terror seizes the hearts of the disciples in a boat at night crossing the sea of Galilee, Jesus asks them, “O men of little faith, why did you doubt?”  When a crowd of 5000 follow Jesus and his disciples out into the wilderness, Jesus has compassion upon them for they are like “sheep without a shepherd,” a phrase echoing the prophecy of Jesus’ birth in Matthew’s Gospel that the new king who would “shepherd his people.”  But gazing at the thousands of people fear trumps the love of the disciples, and they encourage Jesus to send the crowd away because there won’t be enough food for them.  “You give them something to eat,” Jesus says.  They give away all they have, and in a miracle occurs – sharing goes viral and there is an abundance of food for all.  The Kingdom of Heaven is glimpsed for a moment right here on earth.

Jesus tells the fishermen that they will become fishers of people.  The metaphor of fishing is an imperfect one, particularly as we associate the violence of a hook piercing a fish for its capture.  But the kingdom of God is not about coercion but rather invitation.  As real fisher people know– they cannot coerce the fish to swim into their nets.

Perhaps the image of fishing for people conjures up images of Jehovah Witnesses coming two by two to our door handing out pamphlets for us to read which, in their mind include the unquestioned truth.  But that wasn’t what it was about when Jesus sent the disciples out two by two into the world.  In that case, Jesus explicitly sends them out in a posture of vulnerability – without money or weapons – in the hope of making a “soul connection.”  To fulfil the mission they must confront their fears and come with open-hearted love.  They don’t hand out tracks – their message is simple –“the Kingdom of God is at hand.”  If they find receptivity and are inviting into homes it isn’t so they can lecture them regarding the truth, rather as Jesus was for them, they are to be a living embodiment of the kingdom of heaven – a witness to an expansive love that conquers fear.  In sending the disciples out two by two Jesus was giving the disciples an exercise of stepping out in faith to live out the reality of kingdom of God.

The famous preacher of a century ago – Philip Brooks – was once asked why he was a Christian.  The questioner was prepared for Brooks to give a theological discourse, but instead he answered this way:  “I am a Christian because of my aunt who lives in Teaneck, New Jersey.”  The point is we become a follower of Jesus because we have an encounter with someone who is living out with some degree of authenticity the kingdom of God – their deepest identity being that of a child of God – and in doing so find ourselves drawn to them and the power that flows through them.

This is what the Church is intended to be – a community of people who seek out to live out (imperfectly for sure) the reality of the Kingdom of God as opposed to the kingdoms of this world.

Recently I was approached by a couple of parents of the teenagers of our church because they wanted to get the youth group up and running again.  I have always valued the time I have shared with our youth, but the great challenge in getting them together is the busyness of their schedules.  I had a meeting with the parents to talk about this.  I was moved by something one of the mothers said.  The friendships her children had within our church were different, she said from the friendships they had with school.  There was less “drama” she said.  By this I took it to mean that in the school relationships often there was an undercurrent of anxiety with which to contend – the possibility of rejection – of being left out of the circle.  It pleased me to no end that here in our church they experienced a love that wasn’t so anxiety-ridden.  They received here a glimpse of the Kingdom of God.

The world our youth live in is far less brutal than the world that was common place in the Roman Empire.  Our youth are privileged; there are youth in this world that live in places where violence and brutality are commonplace.  Nonetheless, the kingdoms of this world continue to hold sway in their lives.  One of the things I sensed in the time I spent last Spring when I met weekly with our youth in preparation for confirmation was the immense academic and social pressure the youth live under.  They are in a constant battle to maintain their place in this world.  And so we are making plans to carve out some time in their busy schedules where they can experience a community of grace where their inherent worth as God’s children is our starting point.

The journey in which we come to live more deeply into the truth that we are God’s beloved children is a lifelong process, continuing right to our death bed. Along the way, we learn how to let go of the burden of fear, including the ultimate fear by which the kingdoms of this world would enslave us – the fear of death.  The resurrection of Jesus declares the triumph of God’s love over the powers of death and darkness.   We need not be afraid.  We can enter the darkness trusting in the light – the love that under girds all.