Luke 3:1-6 — Listening for an Embodied Word from the Lord 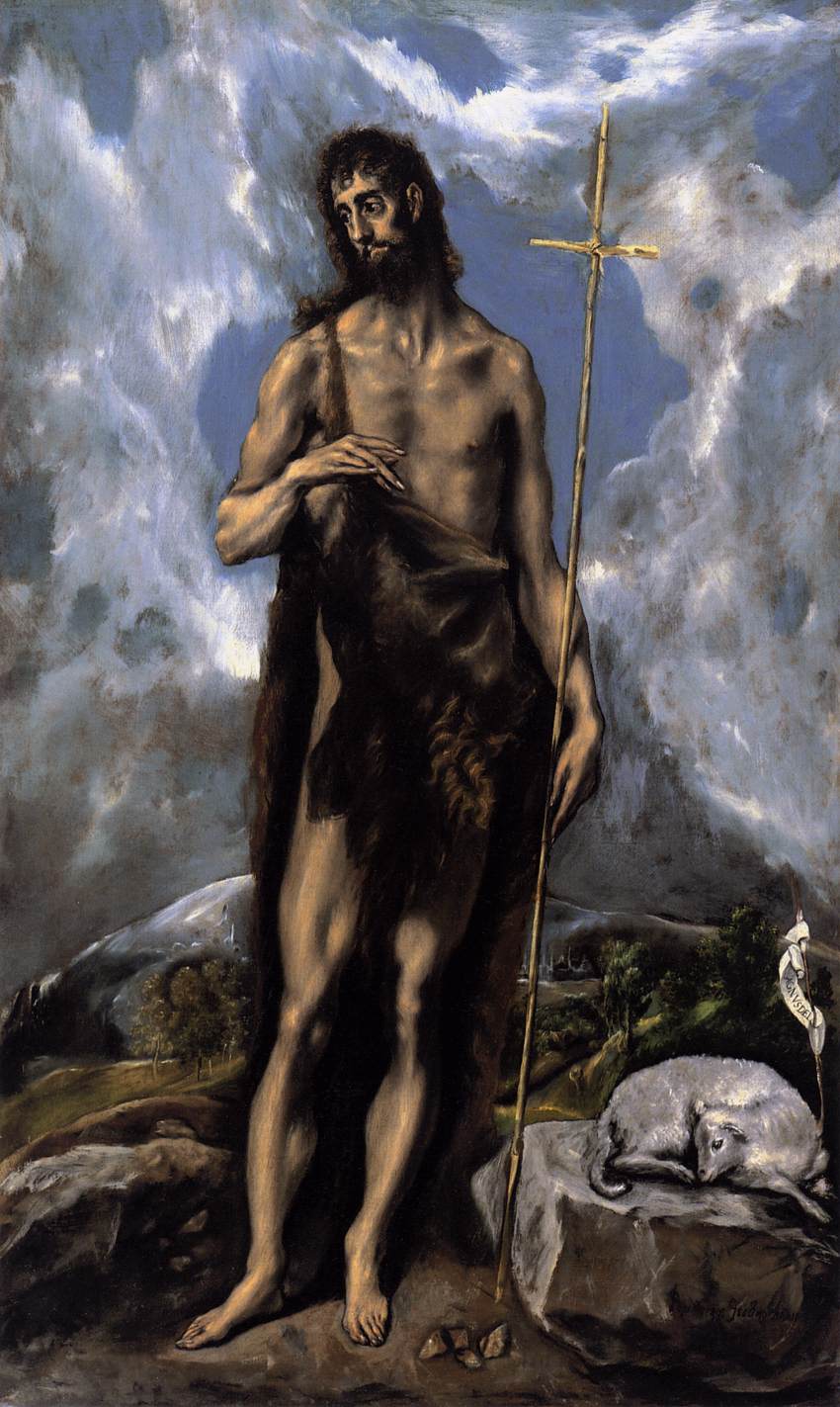 A sermon preached on December 5th, 2021 – the second Sunday in Advent – based upon Luke 3:1-6 entitled, “Listening for an Embodied Word from the Lord.”

The Word of the Lord came to John, son of Zechariah out in the wilderness.  We think of John as having been all about baptizing, but he was in fact first-off a preacher.

Realizing this, it got me thinking about my life as preacher.

For pretty much my entire adult life I have gone through a weekly routine of waiting on a Word of the Lord – that is, a Word of the Lord to speak the upcoming Sunday morning by way of a sermon.  I know this is a peculiar way to make a living, and it may seem hard for you to relate. If I had spent some years working as a plumber like Bill or an electrician like Tom, I’d have those experiences to draw upon in reflecting on how God works in our lives — great metaphors readily available involving unblocking clogged pipes, or tapping into electrical current – but I don’t, so I’m compelled to reflect upon what I know, which is my experience of trying to write a sermon each week.

In my earliest years as a preacher, writing a sermon could be extremely frustrating because of the intense pressure I felt. Sunday’s coming and people are going to show up in worship looking to hear me speak something worth listening to – the Word of the Lord — some insight and inspiration arising from the Bible that will help get them through the coming week, so I’ve got to come through.

On Monday I’d read the scripture readings for the coming Sunday and generally speaking not a whole lot would jump out at me.  I’d turn to various books for commentary as well as other books in search of illumination or an inspiring story to tell in relation to the Scripture – but it would be slow going and as time passed the pressure would mount.  As a sense of panic arose I would seek out more books and articles for some thread of inspiration.  It could get downright painful at times.  Eventually though some theme would emerge that I could focus on and feeling relieved I’d produce four pages or so of typed words to deliver on Sunday morning.

After delivering my sermon I might or might not feel good about what I’d said.  If it seemed to have gone well, I’d feel a rush of endorphins, and if didn’t, well I’d feel badly about myself, feeling I’d failed at the task at the center of my calling.

Either way, for the rest of the Sabbath I could let down the burden, but then on Monday I’d take it back up as the clock for Sunday once more started ticking.

There was a strange thing that I noticed though which was that in spite of all my effort often times what I thought I was saying and what people heard didn’t line up. Sometimes people would thank me for something they’d heard me say that they had found helpful for their walk with God, but as I listened to them tell me what they heard, I’d think, “I didn’t say that.”  Sometimes I’d feel like I’d been the second coming of Billy Graham in the pulpit but nobody would give any indication they’d noticed.  Other times I’d feel my preaching had gone poorly and people would convey that they’d been blessed by something I said.

In other words, I didn’t have much control over the Word of the Lord people did or didn’t hear.

As years passed the pressure lessened some, but I encountered a new problem which was that when I looked at the scriptures on Monday all I’d be able to hear was whatever I’d managed to come up with in my past go-arounds and as awe-inspiring as that might have seemed back then as I read the passages anew those insights seemed lifeless and disconnected from the present moment.   I knew a real Word of the Lord doesn’t feel like that, but I’d find it hard to clear my head of what I’d worked so hard to come up with in years past.

So, you might ask where am I all these years into it? Well, in certain ways everything I’ve described continues to happen, but gratefully it gets dragged out less, and I don’t tend to get very far into that old panicky feeling.

There are two reasons for this.  First, my experience over time has won for me some degree of trust that I will eventually come out on the far side with a sermon to preach, and that helps lessen the pressure.

But the second reason is that I’ve come to see more clearly where the main problem is located. It not that God isn’t speaking to me, nor with the books to which I’ve turned.

The problem is me.  I’ve made preaching too much about me – a weekly referendum on my worthiness as a person.  The pressure I’ve felt is of my own making.  God was talking, but I was too caught up in myself to listen.  I’ve come to identify the state of mind I fall into where I spin my wheels imprisoned in myself.  When I recognize I’ve entered this mindset I realize that it is altogether unhelpful to keep plugging away, looking for yet another book to read.  It’s time to stop until I can come back at it without so much self-absorption.

Last week I mentioned a song I had encountered that spoke to me entitled, “If I Could Talk to a Younger Me.”  There is something that I’ve realized only recently that I would tell that younger Jeff if I could and that is when I become aware of myself spinning my wheels in sermon preparation I should get up from my desk and go for a walk in the woods.  For me the woods I go to is Old Troy Park, just five minutes from the parsonage.

When I get away from the surroundings that keeps reminding me of all the things I need to get done – the environment that reinforces my self-preoccupation – and getting out into the beauty of God’s creation a space begins to open up inside me that makes a deeper listening possible.  Part of what happens as I walk in the woods is that I reconnect with my body.  Sitting at my desk, I lose touch with my body.  It is as though my body is nothing more than a means of transportation for my brain – and this disconnect to our God-given bodies is directly related to the state of self-absorption I’ve described.  The act of walking uses the muscles of my body, and the wonder of creation engages all the senses of my body.

As I walk and my mind clears, I begin to think again about the scripture for the week. With nobody around to listen in, I begin to speak out loud my reflections  – again, engaging my body.  As I walk and talk, invariably something in the passage catches my attention in a way that registers as enthusiasm in my body.

And second, the insight I gradually came to as to where the problem in my sermon preparation was located was the same as the fundamental insight with which John came out of the wilderness to preach.  There were plenty of problems out there in the world that John could and did point to – the unrighteous corruption of King Herod, for instance — but the first problem to be addressed is the one inside every one of us.  Everybody, John said needs to repent.  The movement of repentance is typically misunderstood.  It’s not about feeling bad about yourself and the sins you’ve committed, though an awareness of sin is a part of it.   It’s a fundamental change of direction – of the way we think and approach life.  John recognized that we all get stuck in ourselves.  We ourselves become our center — the consequences of which are ultimately destructive –  when the rightful center is the mystery of the life-giving God.  A movement needs to occur where  we return to a state in which God is at the center, and that movement is repentance. John said everybody – not just some people – needs to repent.  Only then will we be able to hear the life-giving Word of the Lord.

I’ve been talking about my peculiar work of listening for a Word of the Lord to preach on Sunday morning, but the truth is that God is speaking to all of us, all the time but more often than not we fail to listen.  Deep down we long to hear the Word of the Lord.  Part of the problem is that we misunderstand how “the Word of the Lord” comes to us.  We think it is as something locked in the old, dusty pages of the hard-to-make-sense of Bible.  If that is the case, then it would make sense that you’d like to leave the frustrating business of discerning the Word of the Lord to me.  But the only real reason to read the Bible is to get clues as to how to tune into what God is saying to each of us right now in our day to day lives.

We’re also misled by thinking that the Word of the Lord only takes the shape of words, because before it finds expression in particular words it comes to us as a sensation in our body.

Some of the most helpful and humbling words I ever heard about preaching were spoken by Frederick Buechner.  He made the observation that sermons are a lot like jokes in that if we’ve been in the habit of attending church services we’ve heard hundreds of them, but as with the hundreds of jokes we’ve heard in the course of our life time when asked to recall the words of particular sermon or joke, who can recall one?  We forget the words of a joke but remember how it made us feel – the spontaneous belly laughter that arose within us, momentarily setting us free from ourselves.

It’s the same for a sermon. If it stays with us, what we remember of the sermon is the feeling it evoked inside us of waking up from a kind of slumber, of feeling more alive, sensing a larger perspective and purpose to our lives that registered somehow in our bodies.

At the heart of the mystery that we contemplate at Christmas is that the Word become flesh – what is referred to as the “incarnation.”  The Word came in a baby who was incapable of speaking words as we think of them – a baby who could be held in parent’s arms, engaging all the bodily senses.  The Word was embodied.

So, whatever we can do to reconnect with our bodies is helpful for preparing to receive the Word of the Lord that was born into the world at Bethlehem.  The reason that singing has always been a part of worship is that it engages not just our brains but our whole bodies as well.

In a few minutes we will be sharing in the sacrament of Holy Communion, which is itself an invitation to reconnect with the body in order to receive the Word of the Lord.  Jesus’ body and blood received into our bodies in the form of bread to eat and wine to drink.  You can’t get more embodied than that.