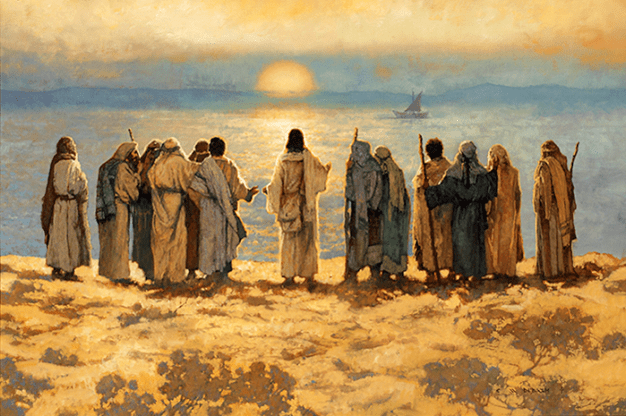 Several years ago I received an email from a mom from our church that I’ve never forgotten.  In it, she described the experience of her young son — an unusually sensitive, open-hearted little boy of about six who had recently begun attending a new school where he didn’t know anybody.  He had anticipated his new school nervous enthusiastically, but unfortunately his first days hadn’t gone well.  Even with a group of very young children social hierarchies quickly arise.  There are always strong personalities who take on the role of gatekeepers, deciding who is in and whose out, and in his openhearted innocence this child had collided with the message, “You don’t belong here, kid.  You’re an outsider, not an insider.”

The mom had been moved to write me because of the way her son had opened up a conversation with her regarding what he was experiencing at school.

Perplexed, she had asked, “What do you mean, honey?”

I’m sure you can understand how I would remember this email after all these years.

My primary response to the email was to feel for the pain of this little boy, and I suspect you can do.  We all have had our own experiences of not being welcomed into the circle.  It’s painful.

My secondary response was to be almost surprised that words I had said in church had been so clearly and deeply absorbed by this little boy.  I might have thought the concept of “There’s always room in the circle” to be a little abstract for a six year old boy, but he had gotten the basic concept: People are supposed be made to feel welcome.

Hopefully, over time there was some room made for that little boy in his new school.  I think I can say we with some confidence that he also came to understand better what it is we’re saying each week when we declare, “There’s always room in the circle.”

I thought about this little boy’s experience from several years ago when I read this morning’s Gospel story.

The story occurs mid-way through Matthew’s Gospel. The disciples have been in Jesus’ presence for a good while at this point.  They have listened to Jesus’ teachings which have been hard to absorb – loving enemies and the whole business about how we focus in specks in others’ eyes when there are logs in our own eye.  But what hadn’t been hard to miss was his miraculous power over the destructive forces in this world:  He’s healed so many sick, lame, and blind people.  He’d made it possible for 5000 poor peasants out in the wilderness all to have enough to eat – like Moses, leading the people to the promised land.  In the dark night out on the sea he’s silenced the storm that threatened to capsize their boat, and even walked upon the dark waters, the very symbol of all that is chaotic and destructive in this world.

They’d seen this all, and seen it up close, more intimately than other people and it was all pretty astonishing to them.

And so Jesus pauses when he is alone with the disciples to ask two questions, the first being about what the people are saying about him.  The people have been pretty impressed, but the answers they have been giving don’t go beyond what God had already done through others.  Maybe, some suggest he’s channeling the spirit of the most recent powerful man of God, John the Baptist.  Maybe he the reincarnation of one of the ancient prophets, maybe even Elijah, the great Old Testament prophet who performed miracles in his day and who scripture described as never really dying – that he’d been carried up bodily to heaven in a glorious chariot driven by angels.  Tradition had taught that Elijah would return when the messiah was about to appear.  Perhaps Jesus was actually Elijah.

Yes, Jesus has made an impression with the people.

After they had given all the answers they had heard, during which Jesus simply listened without comment, he asked them, “But who do you say that I am?”

It’s almost as if Jesus were Jesus saying, “So those are the sorts of answers you’ve heard in Sunday School —  that’s a helpful starting place.  But what about you, now, as an adult?  Who do you – out of your own experience — now say that I am?

The sense you get in the story is that the disciples are initially silenced by the question, embarrassed to risk giving an answer.  But then Simon, the impulsive one – shouts out an answer – one that goes beyond the things they’ve been hearing others say:  “You are the messiah, the Son of the Living God!”

You are the long awaiting Savior sent by God.

Jesus seems to affirm the answer and praise Simon for giving it – except if you listen closely it isn’t actually praise that Jesus gives Simon:  “Blessed are you Simon, son of Jonah!  For flesh and blood has not revealed this to you, but my Father in heaven!” Which is sort of like saying, this isn’t something that either you learned by paying close attention in Sunday School, nor is it something you just figured out on your own with a clever mind. This was a revelation – a gift given to you by God.  You’ve been blessed with this insight, and the proper response is humility, not pride.

We refer to this disciple as “Peter”, but that wasn’t the name his parents gave him.  It was “Simon”, the son of Jonah the fisherman.  Nobody was called Peter in those days.  Jesus gave him this peculiar name — Petros – which in Greek is the word for rock.  The suggestion is “solid as a rock”, but there’s obvious irony here because just two chapters earlier Simon sank like a rock when he tried to walk on the water with Jesus.  If we are familiar with the rest of the story, we also know that Peter infamously denied knowing Jesus three times the night Jesus could have most used his support.

And in the passage that immediately follows this morning’s reading, Jesus goes on to give Simon another name – “Satan” – the tempter.   Jesus begins to talk about how as the messiah he must go to Jerusalem and suffer and die at the hands of the authorities – the gatekeepers who decide who is in and who is out.  He tells them he will die and he will be raised, but Simon Peter doesn’t even seem to hear the raised part, because he is so freaked out by the suffer and die part, that he takes Jesus aside to try and talk him out of this crazy talk.  Which inspires Jesus to yell our Simon Peter, “Get behind me, Satan!”

It’s not surprising that Simon and the other disciples were so stunned when Jesus announced to them that he would suffer and die, and then be raised, because as I said the greatest impression he had made on them so far was his extraordinary power over the destructive forces of this world.

We are on a journey with Jesus, and the question, “Who do you say that I am?” isn’t a question we answer once and then put behind us.  It’s a question we are meant to live with.  We are continually the little boy encountering a wounding world and asking ever anew the question, “where is God in all this?”

We want God to be fixing the problems.  In Jesus we see God most clearly revealed and there are two things that Jesus makes clear in the Gospels.  To the question of, “where is God in all this?” one answer is smack in the middle of it.  He is with us in the suffering.

The other thing that Jesus makes clear is that an invitation is repeatedly offered to us:  “Come, follow me.”  The path to the resurrection leads through the cross.  “Take up your cross and follow.”

This passage is unusual because it is one of only a couple of places in the Gospels in which Jesus refers to the Church that will come after him – to you and me and all those who would seek to follow him.

“You are Petros – Peter – the Rock – and upon this Rock I will build my church.”  The church is built on the imperfection of Simon Peter who is not unlike you and me, sometime mysteriously the lips through which God’s word gets spoken, sometimes the voice of Satan the tempter, looking for the easy way out.  Sometimes a total coward and sometimes capable of bravery and love of which we never dreamed ourselves capable.

So in the midst of the present crisis – the problems and conflicts on so many levels – the basic question asked of us is:  Are we part of the problem or part of the solution?  Are we reaching out to one another in compassion, or are we sowing seeds of division.  Are we making room in the circle, or shutting people out?   Are we following Jesus, or fleeing from Jesus?

Who do you say Jesus is, for you?