Luke 13:1-9 — The Tenderness of the Gardener and the Power of Playing Music 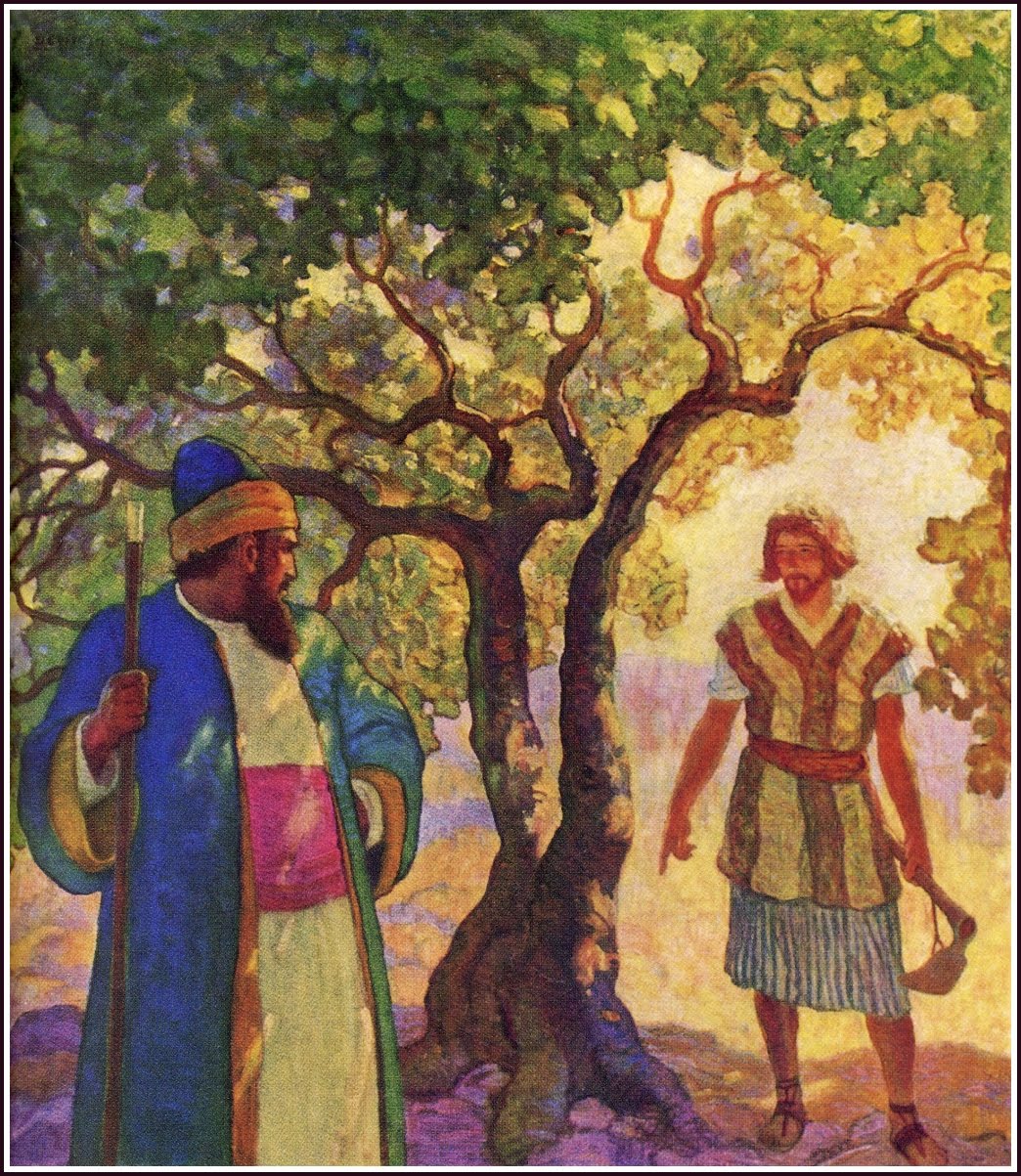 A sermon preached on March 20th, 2022 based upon Luke 13:1-9 entitled, “The Tenderness of the Gardener and the Power of Playing Music.”

At that very time there were some present who told him about the Galileans whose blood Pilate had mingled with their sacrifices.  He asked them, “Do you think that because these Galileans suffered in this way they were worse sinners than all other Galileans?

To briefly pause:  in asking this question, Jesus is challenging the prevalent understanding in those days – one rooted in the Book of Deuteronomy — and one that we can instinctually turn to when something bad happens to us – that when bad things happen to us, it is because we’re being punished for something bad we did.   The Book of Job was written in response to that whole notion.

In what follows, Jesus clearly rejects the notion that bad things happen to people as punishment for sin.  But what he goes on to say is challenging nonetheless.

Then he told this parable: “A man had a fig tree planted in his vineyard; and he came looking for fruit on it and found none.
So he said to the gardener, ‘See here! For three years I have come looking for fruit on this fig tree, and still I find none. Cut it down! Why should it be wasting the soil?’
He replied, ‘Sir, let it alone for one more year, until I dig around it and put manure on it.
If it bears fruit next year, well and good; but if not, you can cut it down.'” (Luke 13:1-9)

A year ago, I heard from my daughter Kate that the town to which Sarah and I are moving in Maine has a lively music community.  This news inspired me to cancel my TV that I primarily used to blitz out in front of in the late evening, watching either sports or talking heads on what passes these days for news channels and spend the time instead to playing my banjo with a goal of getting better so that when I get to Maine I can feel comfortable playing with other people.  I’m glad I did.

A few months back I invited Charlie Wilken, a guitar player to get together with me once a week to play music and gratefully he accepted my invitation.  Ever since, our time playing music together has been a highlight of my week.

I am struck by the expression, “playing music.” It suggests making music is a kind of play.  Being able to play is something that comes naturally to us as children but which most of us over time – and I very much include myself in this category – lose our ability to easily enter into play.

When we add to this our identities as Christians, we recognize not only responsibilities for ourselves and our families, but also to the larger world.  We know we ae supposed to be like the “Good Samaritan” who doesn’t just pass on when he sees someone hurting, but stops to offer them help.

So, as a Christian it can seem like there is even less room for play.

The passage I just read can have the effect of reinforcing this “get serious” attitude about life.  It begins in a similar way to the sermon I preached last week when I talked about Putin’s brutal invasion of Ukraine.  People tell Jesus the news of terrible atrocities committed by the Roman Governor Pilate – a Putin of his day — the murder of several Galileans.

While rejecting the notion that these murdered Galileans were somehow being punished by God for some kind of sin, Jesus clearly does hear the news of the atrocities as a sign that everybody needs to repent.

Jesus says in so many words that the world is heading down the path to destruction and it’s time to turn from evil towards goodness – to God.

Now, this is a message here we do need to hear.  We live in threatening times.

All times have been threatening, but in some ways the stakes now seem particularly high.  Our democracy that we have traditionally presented to the world as a sign of hope seems under threat.  The habits of consumption of human beings are doing harm to our planet —  threatening all living being in the ecosystem.  And now there is this terrible war taking place in Ukraine where it is not inconceivable that nuclear weapons could be used.

This is a message we need to hear.  But the place where my attention was captured was the little parable Jesus told after call for us to repent.

The fascinating thing about parables is that they aren’t allegories – which means they don’t have one single meaning.  Parables invite our reflection, and we will likely hear different messages at different places in our lives.

Hopefully, the Holy Spirit leads us to hear what we need to hear in a parable.

In this morning’s parable, Jesus talks about a fig tree that is not bearing fruit.

The owner of the land who wants to cut it down because the tree is wasting his precious soil.  The gardener who tends the fig trees asks the landowner for patience:  give this fruitless fig tree another year, and during that time I’ll give it some special attention.  I’ll loosen up the soil around it and add some nutrient-rich manure. (Sheep pooh.)  If a year from now the tree still isn’t bearing fruit – well, then you can go ahead and cut it down.

On one level the parable can sound similarly grim to the words that preceded it:  The fig tree is going to get cut down if it doesn’t get with the program and start bearing fruit.

One quite valid reaction to this parable is to identify with the fig tree and ask the question, “Am I bearing fruit, or am I just taking up soil?”  We can hear the parable as reinforcing what Jesus just said about the necessity of repentance.

“Repentance” sounds to our ear like a grim word – and repentance can definitely have an element of sorrow in our recognition of the ways we have contributed to the brokenness of life.

But the essence of repentance is to change direction – specifically, to return to our true home, and as we hear in another parable — that of the prodigal son —  the one who welcomes us home in repentance does so with joy. The father throws an extravagant party for his lost son who has finally come home.

And you may recall how that particular parable ends, with the elder brother –   the one who has been exceedingly “responsible” — refusing his father’s invitation to come dance at the party.

The thing that caught my attention in this morning’s parable was the graciousness of the words spoken by the gardener.  It’s almost as though the gardener views the fruitless fig tree as a little child who needs not a drill sergeant to kick the child’s butt, but rather someone who will offer some tender nurturance.

It’s natural for a fig tree to bear fruit.  Why isn’t the fig tree bearing fruit?  Perhaps it’s been traumatized. It needs to experience extravagant love to overcome the trauma that has kept it from bearing sweet fruit.

The life to which Jesus calls us is a whole life.  In this instance, what I mean by whole is that on the one hand it is true that we are called to take responsibility for – to care for – the suffering of others.  We are all in this together.  Jesus weeps over Jerusalem in his grief for their unwillingness to know the things for peace, and if we are whole the way Jesus was whole when he walked upon this earth, then we will weep over what is happening in our world as well.

But Jesus also loved a good party, and told stories about parties, and implied that the hyper-responsible elder brother was in danger of missing the kingdom of God.

He also told us that unless we turn and become like a little child – a child who still knows how to spontaneously play – we will miss the kingdom of God.

So, I want to show you the video that provided the inspiration for my sermon this morning.  It was one that Charlie Wilken called my attention to – he’d seen it on the news in the reporting about the war in Ukraine.  It takes place at a train station where Ukrainian refugees were hoping to board a train to get away from the Russian missiles destroying their city.

You may remember the words.  They describe all the beautiful things the singer sees.  Trees and red roses, skies and clouds, days and nights, rainbows, the faces of children, people telling one another they love one another.

It’s a lovely song, but I’ve tended to view it as a little Pollyanna.  I don’t think I’ll ever hear the song quite the same way having heard it played in the midst of refugees fleeing from a war zone.

Now it almost strikes my ear as an act of joyful defiance: “Mr. Putin, you can send your horrible bombs that are killing our loved ones, you can destroy our homes – but you can’t take away what is good and beautiful in this beautiful world God has made.  We defy you by ‘playing’ music – we defy you by celebrating the goodness of creation.”

I was reminded of some words Jesus spoke to his disciples a chapter earlier from this morning’s reading.  He told them not to worry about their lives.  He said they should take note of the birds of the air that don’t spend their days anxiously storing up grain in barns but who nonetheless have what their most important needs met.  He tells them to consider the lilies of the field, which without anxious worry are more naturally beautiful than the expensive clothing Solomon spent his money to wear.

In essence, Jesus tells his disciples – and you and me – to forgo our anxious, desperate clutching — to walk on this earth with a lightness of spirit, with an eye to all that is truly beautiful.

There is another video you may have seen, that of a little girl in the bomb shelter underneath an apartment building singing the song from “Frozen” called “Let it Go.”

The way of Jesus calls us to sacrificial love, but it also invites us into a lightness of Spirit in which we let go of our worries cares as we anticipate the blossoms of the resurrection.   Let us “play” the music” that expresses the joy of God’s kingdom as we defy the powers of death and darkness in the name of Jesus, the Lord of heaven and earth.