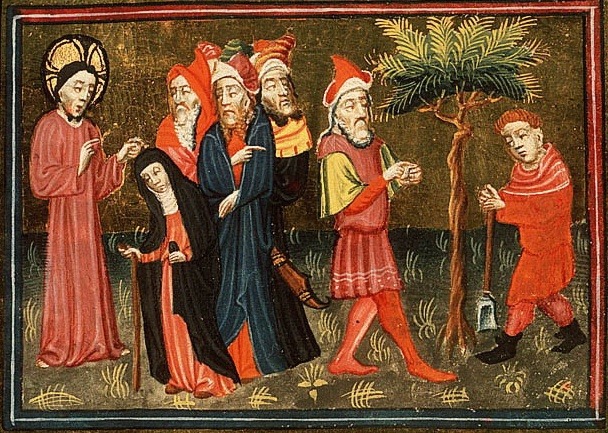 A sermon preached on March 24th, 2019 based upon Luke 13:1-9 the week after news of my lawsuit against Wells Fargo and the State Police hit the news.

This past week, the ordeal I have been going through that has led to my suing Wells Fargo and the State Police hit the news.  The reporter from the Daily Record asked me, “Have you preached on this yet?” I told him that I hadn’t, but this morning I will.

(In this part of the sermon I reviewed what I have been through with my false arrest when Wells Fargo provided the State Police with ATM photos of me making legitimate deposits in their request for photos of someone who made fraudulent check deposits on the same day.  It’s complicated, and for more detail I invite you to go to my Facebook page where I have posted articles about what happened, as well as a summary of what took place.)

My lawyer encouraged me to get the story of what happened to me out in the press as a way to bring public pressure on Wells Fargo and the State Police regarding their irresponsible actions.  He connected me with a Star Ledger reporter who wrote the first article.  The reporter commented that what I had been through must have been a “test of my faith.”  I responded that no, I hadn’t seen it this way.  Rather I was inclined to see my ordeal as an opportunity to serve God by getting some light shone in some dark places.

The reporter didn’t include my response in his article.  He preferred his “test of faith” angle, and included the notion that this must have been that for me.

Which brings us to this morning’s Gospel story.  Jesus is headed to Jerusalem where he knows he will lay down his life in love for all people.  People are talking about a horrible injustice that has recently occurred:  Some Galilean pilgrims to Jerusalem were slaughtered by Pilate’s soldiers while they doing what the Torah commanded them to do – offering sacrifices in the Temple.

In large portions of the Old Testament there is this understanding that if we keep faith with God and do right God will reward us with a happy and prosperous life, and if we fail to keep faith and do wrong God will punish us in this life.  People are wondering how this applies to the Galileans who got slaughtered.

“That’s a bunch of crap!” I paraphrase, but Jesus vehemently rejected the notion that the Galileans must have done something bad for which they were being punished.  The lives they lived were no worse than anybody’s else’s.

The interesting thing to me is that the reporter’s question regarding whether my recent experience had been a test of my faith was coming from the same place.  Hey, as a pastor whose devoted his life to trying to serve God and doing good, you must feel let down by God that allowed you to go through this.

If this is what my Christian faith has been about, then even though I haven’t been passing fraudulent checks, I have been passing a fraudulent faith.  How could I believe such a thing when I’ve known plenty of people who have suffered far worse things than what I’ve been through recently.

Bad things don’t happen to us because God is punishing me.

In the Gospel story, Jesus goes on to bring up another terribly tragic event. This one not regarding injustice – rather, it’s one of those instances where people happened to be in the wrong place at the wrong time.  I tower collapsed in Jerusalem and 18 people died as a result.  No, says Jesus, this has nothing to do with God punishing anybody.

The same is true when somebody gets a diagnosis of cancer or has a loved one die in a car crash.

Bad things happen in life.  There is a mystery as to why these happened, but one thing is sure:  it is not about God punishing people.

Sometimes if we wait long enough, we begin to see good things come out of bad things that happen.  For me, this didn’t take that long.  It provided opportunity for me to recognize how blessed I am to have a family and a congregation that love and support me.

And, as I said to the reporter, it has provided me with an opportunity to shed some light in dark places because there are a lot of people who are less fortunate than myself – people without the capacity to hire a competent lawyer and people who have had previous arrests – who in my same situation could easily have been pressured into taking a plea bargain in spite of their innocence because the prospect of getting convicted was too real and too dangerous.  If by calling attention to what happened to me I can make it slightly less likely for Wells Fargo and the State Police to allow something like this to happen in the future – well, that would be a good thing.

In referencing both of the bad things that had happened recently in his day, Jesus goes on to call all people to “repent.”  We tend to grossly misunderstand what it means to repent.  It is not about feeling miserable about yourself for being a sinner.  The Greek word for repentance means to change your mind – that is, to stop seeing life the way the world has trained us to see it, and instead to see it as God sees it.  Specifically, to see it less through the lens of our tiny little ego and see it instead as undergirded by God’s great love that knits us all together.

That’s the change that needs to take place in all of us.

Jesus proceeds directly to tell a short parable.  There are three characters in the parable, assuming a fig tree is a character.  A vineyard owner discovers that a fig tree he had planted hasn’t produced any figs.  He is angry and wants to have it chopped down right then and there.  Why should it take up space?  His gardener counsels the vineyard owner to have patience.  He offers to loosen up the soil and to add to the soil a bunch of mineral rich donkey poop (manure).  Give the fig tree some time and see whether it starts producing figs.

What does it mean?  Well the first thing to say is that parables don’t have a single meaning; they invite us inside and we can hear different things at different times.

A common interpretation of this parable is to turn into an allegory:  The vineyard owner is “God the Father” and the gardener is “God the Son.”  Two thirds of the trinity are having a disagreement.  Maybe we need the Holy Spirit to give an opinion and break the tie.

That’s nonsense, of course.  As Jesus says in John’s Gospel, “the Father and I are one.”  They don’t have disagreements.  Jesus reveals the heart of God.

Perhaps a more helpful way to approach the parable is to see the vineyard owner as being who we often want God to be.  Be that God that much of the Old Testament tells us you are.  Chop down the bad people who make life so hard at times for the rest of us!  Reward the good people!  Make life fair!

Whether this would actually be good news or bad news to have God act like this depends upon whether we identify with the fig tree. As long as we can comfortably say we’re not the fig-less fig tree than maybe that would be good news.

But with a little personal reflection, I think most of us can recognize something of the fig-less fig tree in ourselves.  A great deal of the time we are stuck in that ego-centered view of life in which everything ultimately revolves around ourselves.  If we were created in order to be a vessel of God’s love, how often can we confidently say we have been that?

Not so much, I suspect.

So when we begin to recognize ourselves in the fig-less fig tree then the words of the gardener begin to express some good news of patience, mercy and grace.

I marvel at the way the words of the gardener hold together in tension two qualities.  On the one hand, there is some accountability implied in the gardener’s words.  Sooner or later the fig tree has got to get it’s act together and start producing figs.  And yet the fig tree needs help – it needs grace.  That’s what the gardener is offering to provide in loosening the soil and adding donkey poop.  Donkey poop is grace.

I came across this essay written by a columnist named David Cook entitled, “The Two Lives of Tyler Moore.”  He describes a 28 year old African-American man named Tyler Moore who he got to know in his city of Chattanooga. At the age of 14 without a mother or father Tyler joined a gang.  By 18 he was in prison serving a four year term where the rage that lived inside him just deepened.  He was released from prison at 22 and returning to his neighborhood with the same rage he was back in prison six months later where he served another two years.

It was then, as Tyler put it, he woke up.  The guards moved him in with an older, wiser inmate who managed to pierce Tyler’s illusions.  “This old guy tells me, ‘You can be angry at the world or you can get your mind right.’” Taking this to heart, Tyler’s awakening began.  He read a thousand books in prison.  He spent a lot of time meditating and praying each day in his cell.  “You have God and the devil residing in yourself,” he said.  “It’s up to you who you choose.”

Since being released from prison four years ago Tyler has been on a mission.  With the help of someone willing to give him a chance he secured jobs to support himself with – something that can often be very difficult for a felon.

“I preach accountability,” he says to both Black and White folk. Everybody has a role.  “Don’t blame,” Tyler says. “Only see solutions. Always practice love.”

The author of the column concludes:  “There are many types of prison; you and I may be free to come and go as we please, but if we are locked in habitual mental patterns of destruction and negativity, then we are not free at all.

“There is no life beyond repair.”

I am struck in the story of Tyler there is that same mixture of accountability and grace.  It was grace that placed Tyler in that cell with the older, wiser man who could challenge his illusions and mentor him.  It was grace in finding someone willing to give Tyler a steady job when his incarceration ended.  But he had to choose to respond to the grace – he had to take responsibility.

So must we all.

Whatever life serves us up – both the good and the bad – we have a choice how we will respond to it.  When grace appears, will we welcome it?  If there is an opportunity to bring some good out of what is clearly bad, will we take it?