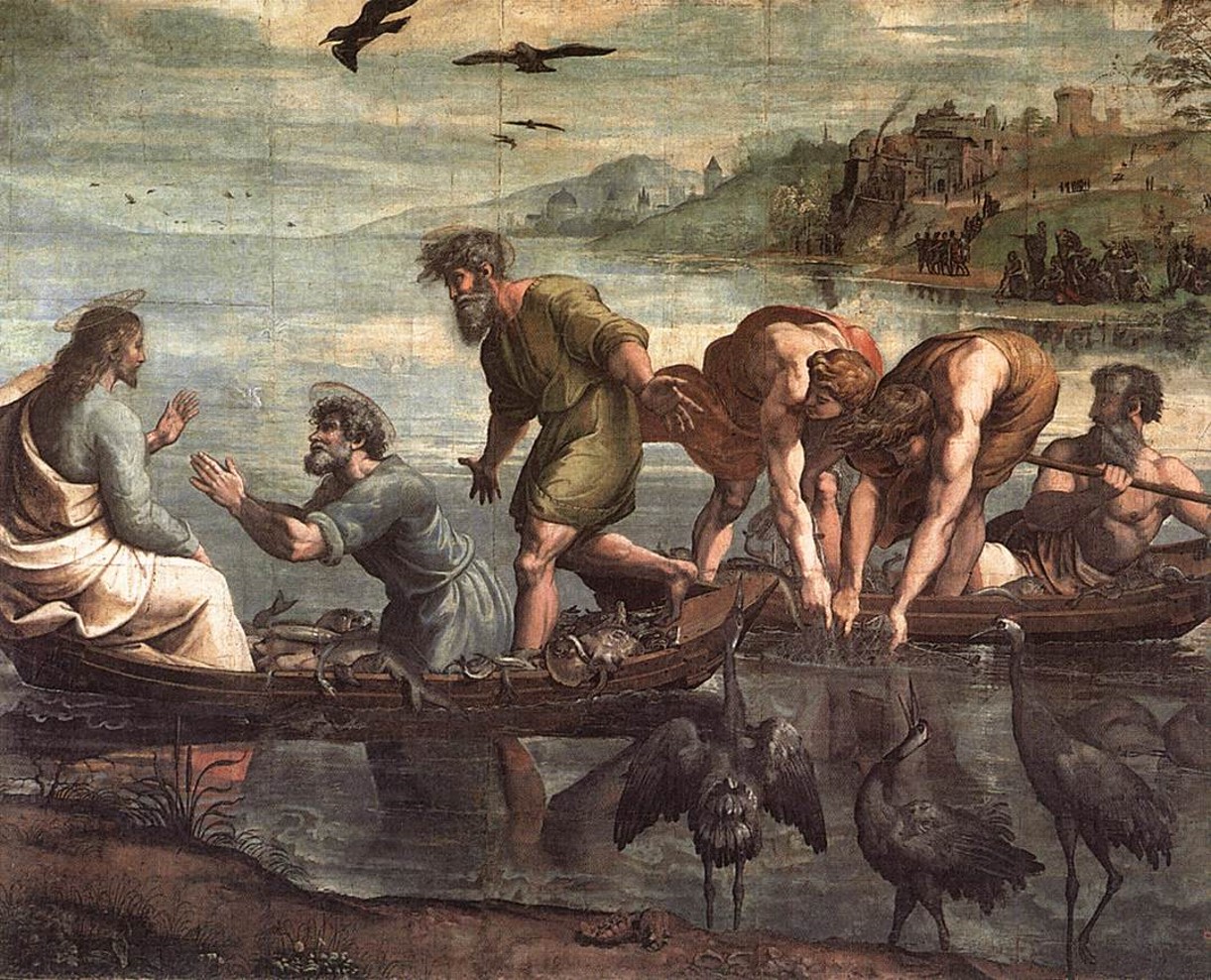 As Christians, we say that Jesus is our “savior”.  Well, what is it that we need to be saved from?

The story we just heard suggests different answers that could be given to this question.

One answer is that we need to be saved from is the threat posed by the chaotic forces of the natural world — the unreliability with which fish show up when fishermen cast their nets – the threats to lives posed by draughts, forest fires, hurricanes, and such.

That doesn’t, however seem to be a theme expressed very often elsewhere in Jesus’ ministry.

If you look behind the scenes of what took place that day long ago there is another answer to which we can point. The fishing industry was under the control of Rome, which meant that a large portion of the fishermen’s profits was taken away from the local community. An unsuccessful night of fishing would mean people in the community went hungry.  The local farming economy system was similarly rigged. In times of draught poor farmers would go in debt to the rich which over time would eventually lead them to lose their farms and to enter a life of bondage working as day laborers in order to keep their families from starving.

In the story right before this, Jesus made it clear that yes, injustice was a part of what he had come to save us from.  In the synagogue in Nazareth Jesus declared that the Spirit of the Lord had anointed him to preach good news to the poor and proclaim release to the captives.  By miraculously bringing about Simon’s great catch of fish Jesus assured the poor people hanging on by a thread in the community for that day at least would be saved from going hungry.

This answer to the question of what it is we need to be delivered from locates the problem in the evil that gets expressed in political and economic injustice.

But Jesus led Simon out into deeper waters, an ultimately this story challenges us to go deeper in locating that from which we need to be saved.

Simon experiences an epiphany in his encounter with Jesus – a sudden recognition of deep truth.  Simon’s epiphany has two parts to it.

Awestruck by the miracle Jesus has brought about, like Isaiah before him Simon is suddenly aware that he is standing in the presence of the holiness of God. The light of this holiness reveals to Simon the first part of his epiphany – a sudden, deep awareness of himself as a “sinner”.

What does this cry mean?  Does it mean that Simon has done some horrible things in his past that we don’t know about – some evil deeds that identify him as a “sinner” in distinction to other respectable people?

No.  Simon is just a run of the mill sinner – like you or me.  It is simply that at this moment he suddenly recognizes the full extent of his own inner brokenness.  He sees clearly the power of the darkness within him – his bondage to this life wrecking force.

We don’t talk much about “sin” and “sinners” these days and for good reason.  These words carry a lot of baggage. They call to mind, unfortunately a long history of people acting “holier than thou” – people pointing their fingers in condemnation of what they believe to be the “sin” they see in others and not in themselves.

Mostly likely we learned to think of “sin” primarily as a particular bad act that breaks one of God’s laws.  The sins clearly spelled out in the Ten Commandments come to mind: murder, theft, bearing false witness, adultery.  Perhaps we think, “Hey, I’ve managed to avoid these things.  I’m not a ‘real’ sinner.”

But the deeper meaning of sin points to the destructive, dark power that resides inside all of us which in various ways leads us to harden our hearts.  If it’s been our good fortune not to find ourselves in situations where severe temptation perhaps we’ve managed for the most part to keep this deep darkness hidden from view.

“Lead us not into temptation,” Jesus commands us to pray, because the truth is the power that the word “sin” points to is very strong and we are very weak.

There is a deep and profound paradox to the Christian understanding of sin, and it is that we are simultaneously responsible for our actions and ultimately helpless to resist the power that is sin.  This is hard to make sense of, but if we ponder deeply our own experience, I suspect we’ll recognize its truth.

The destructive power of sin finds expression in a wide range of ways but the one consistent thing is that it leads to broken relationships:  Sin manifests itself in walls that keeps us from feeling connected to God, feeling connected to nature, feeling connected to other human beings when the great truth at our deepest core is that God has knit us all together.  These walls are our own doing, but they’ve been such a part of lives that they’re hard to see clearly.

Sin is expressed as a kind of tunnel vision where we only see life from our narrow, self-absorbed point of view, and to an arrogance that claims we know far more than it is possible for a human being to know – that our point of view is uniquely accurate.  It is the power that leads us to condemnation – of others, but the driving force of this condemnation is the condemnation it direct towards ourselves.  The reason we feel so driven to pass judgment of others is that it allows us to avoid facing our own deep darkness – our fears as well as our hatred, envy, greed and all the other so-called “seven deadly sins.”

It’s what Jesus was pointing to in the Sermon on the Mount when he asked why we see the speck in our neighbor’s eye but overlook the log in our own. It’s what he was getting at when he declared if we have anger and resentments living inside our hearts there is no essential difference between ourselves and a murder — same with lust and adultery.  In reference to the murderer or the adulterer, “there but for the grace of God go I.”

So, the first part of Simon’s epiphany occurs when in the sudden perception of the holiness of God present in Jesus the light that shines compels him to acknowledge the dark abyss within his own heart and cry,  “Depart from me, Lord.  For I am a sinner.”

Which is where the second part of Simon’s epiphany occurs which is of the presence of grace.

Lo and behold, Jesus — the Holy One of God–  does not reject Simon because he is, in fact a sinner.  He does not condemn him, although that’s what Simon assumes he deserves.

Jesus sees clearly this darkness, but he sees something even deeper in the heart of Simon – something good and gracious.  He sees the image and likeness of God.

Jesus calls Simon to join him in ministry with all the similarly broken people of this word struggling with this same dark, destructive power.  Bearing witness to the Gospel, they will confront the ways the power of sin gets expressed in the injustices of the world, but the first place the darkness must be confronted is in the heart of each human being.

“From now on,” Jesus says to Simon, “you will be fishing for people” – which is to say he will be witnessing to the saving power Jesus has come to reveal – the love that alone can deliver us from the power of sin and its condemnation.

The power of sin didn’t suddenly cease to wreak havoc in Simon’s life, but that day a journey began – one made in the company of Jesus.  There would be many stumblings on this journey but over time Simon would learn not to rely on his own power which simply isn’t strong enough to overcome the dark power – but rather to reach out to the power that is God’s. That’s how he would become Peter – the rock.

The fact that Simon is intimately acquainted with the power sin has to keep a person in bondage makes him especially equipped to witness to the Savior who has come to deliver us from sin’s death grip.

In a few minutes we will share in what we call Holy Communion.  We will dine with Jesus.

In the Gospels we hear that the thing that particularly outraged the Pharisees was that he dined with sinners. “If Jesus were truly holy,” they thought to themselves, “he wouldn’t do that.  He’d join us in condemning the sinners.”

What they couldn’t acknowledge was that they themselves were sinners.  Their inner darkness was too scary for them to face.  Their kneejerk reaction was to flee the light by condemning others.

As Jesus said to Simon so he would say to the Pharisees if only they could listen:  “Don’t be afraid.” Oh, if only like the elder brother in the story of father who had two sons they would accept his invitation to come to the Kingdom of God party.

There is a seat at Jesus’ table waiting for each of us.  All we need to do is humble ourselves, and recognize our need for the savior.