Matthew 3:1-12 — Making Room for John the Baptist in Our Christmas Prepartions 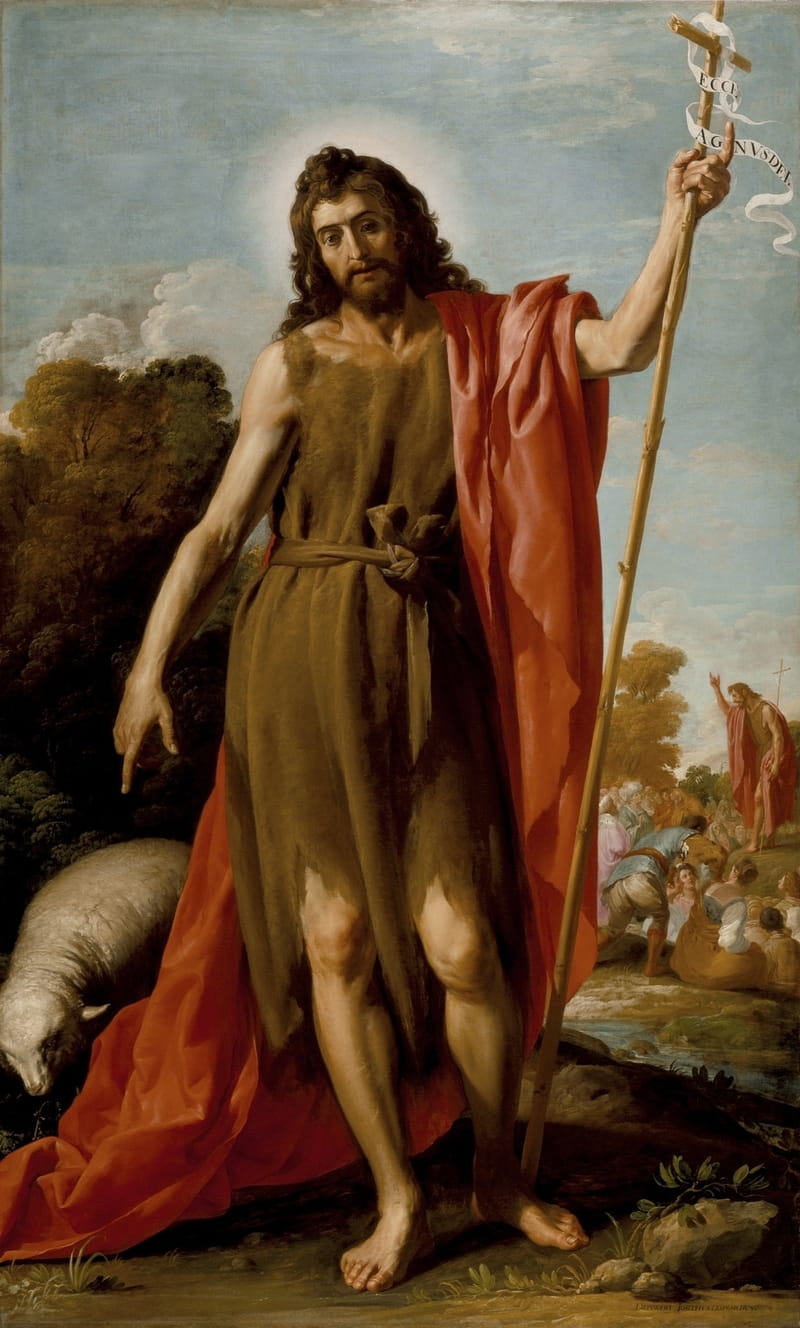 A sermon preached on December 8th – the Second Sunday in Advent – based upon Mathew 3:1-12 entitled, “Making Room for John the Baptist in Our Christmas Preparations”

For most of us, it would be hard to find somebody less likely to put us in “the Christmas spirit” than this grim figure appearing in this morning’s Gospel reading:  John the Baptist, attired in camel’s hair and eating locusts and wild honey, calling folks “a brood of vipers”, and warning of the wrath to come.

To make him perhaps a little more palatable I doctored up a couple of paintings of the prophet.  (Here I inserted edited paintings of John the Baptist to make him more festive.) This is John wearing a Santa hat with a sprig of missle toe in his hand.  And this is John offering up a plate of his famous Christmas cookies.

But alas, every second Sunday in Advent old John shows up calling us to repentance.

Perhaps a closer look is required.

The first thing to notice is that the reason that John the Baptist makes all this fuss is because there is something really wonderful coming; indeed it is very near.  It’s not Christmas, it’s what he calls “the kingdom of heaven.”

It is crucial to prepare for what is coming – to “prepare the way of the Lord” to use Elijah’s phrase – and the primary means of making such preparation is John says by acknowledging our sin and repentance.   Unfortunately, these two words – “sin” and “repentance” – tend to carry a lot of unfortunate baggage that keep us from grasping the heart of what’s being talked about here.  We tend to associate such words with somebody trying to make us feel guilty, ashamed – bad about ourselves and who needs that?

Although repentance can involve an awakening of feelings of guilt and remorse, that’s not its primary meaning. It’s about changing the direction of our lives. It’s really the pathway to true joy.

A big part of the problem is misunderstand what “sin” is really referring.  We tend to think of sin as the breaking of God’s laws — doing things of which God disapproves.  And although there can be truth to that, the primary meaning of “sin” is something else:  sin is broken relationships.

The particularly sour expression John uses – “brood of vipers” – is directed at people who understand sin exclusively as breaking God’s rules.  They are the people who have done a pretty good job of keeping the 624 rules included in the Torah.

They came to the river that day not to repent, but rather to show their support of the idea that everybody else needed to repent – needed to do a better job of keeping the rules. They themselves didn’t feel the need for any kind of serious repentance.  In their minds the direction their lives were headed was the right one.  The problem lay in the lives of all the others.

The truth of the matter though was that sin was as much a part of their lives as anybody else’s because their lives were a stinking cesspool of broken relationships.

The brokenness of our relationships to others can come in a wide range of forms so it requires discernment to recognize the particular form of our present brokenness.  For the Pharisees it took the form of their “holier than thou attitude” towards others, a common expression to this day. Sometimes it can involve harboring anger and resentments that lead us to harden our hearts towards other.  In these cases, the others we’ve pulled away from are people who God cares for, hence the connection to our relationship to God.  Sometimes the brokenness of our relationship to others involves our own cowering – our refusal to let our light shine which in turn leads others not to take us seriously.  In the current era this brokenness has found expression also in our relationship to the earth and our failure to be good stewards of this gift.

The brokenness of our relationship to God can also take various forms.  I heard a woman describe this week how when she went through a miscarriage, she was feeling very angry with God.  The anger wasn’t the problem — the more immediate issue was that she had picked up the idea that it is a sin to be angry with God.  So she had pulled away from God, and it was just what she needed when a pastor told her it was okay to be angry with God.  This message allowed her to turn back to God – to be real with God – and over time she moved through her anger and allowed herself to release into God’s loving embrace.

The most common way to break off our relationship with God is by simply not giving God opportunity to address us.  For some the first thought that might come to mind in this regard would be by not believing in God.  But there other, potentially more dangerous ways to avoid God addressing us and by this I have in mind thinking we already know what God has to say to us – that we have God all figured out.

We think we’re having a conversation with God but really we’re holding a monologue because we assume we already know what God should be up to in the present situation and we are too busy reminding God what needs to be done that we don’t listen to what God may be trying to say to us.

Perhaps we avoid making time to attend worship because we’re too busy meeting our responsibilities.  Or maybe we simply avoid times of stillness during which we might hear God whisper to us.  One place God often speaks to us is through our conversations with other people, but if we keep having the same old conversations with same old people, never opening up to new perspectives we can keep from hearing something God may be trying to tell us.

As you see, the three forms of broken relationship are all interconnected.

But in truth there are many parts to our selves.

Take, for instance, the distinction between the self we present to the world and the self we keep to ourselves.  The self we present to the world is a crafted self.  We spend a lot of energy crafting this presentation with an attempt to control how others view us.  There’s some validity to this part of ourselves:  how we act in the presence of others is a significant part of who we are.

But there is that other part – the hidden part.  The part we would be embarrassed to have others see – the part that we wonder if we will would be considered lovable if others could see it clearly.  Sometimes we can pretend that the inner part that is distinctive from our presentation self doesn’t even exists.

When there is a big gap between the self inside and the presentation self we have a seriously broken relationship with ourselves.  And it impacts those other relationships – because we won’t allow others – or God — get too close, because we don’t want them to see that self.

When it comes to interpreting scripture as well as interpreting dreams – which make frequent appearances in scripture – a helpful thing to do is to ask, “in what way am I like all of the characters that appear in the Scripture story or the dream?” Take for instance, the famous parable of the prodigal son and the elder brother.  In what ways am I like the prodigal son?  The elder brother?  Indeed, the father?  There’re all in there somewhere.

This week the prophecy of Isaiah is one in which it speaks of the lion and the lamb lying down with each other, and a little child leading them.  Spoiler alert:  the Christmas play includes the dream of a little child who is afraid of opening a door because a growling lion is outside.  Eventually with the help of her guardian angel she does, and sure enough, with a little coaxing the lion and the lamb lie down together.

What might the little child represent?  Well, most little children, assuming they have received good enough parenting, are a) trusting, and b) playful.  Somewhere inside us that little child exists, though at times she or he may get pretty deeply buried.

What if to be truly whole, to be truly human, all three of these archetypes need to live inside you in harmony?