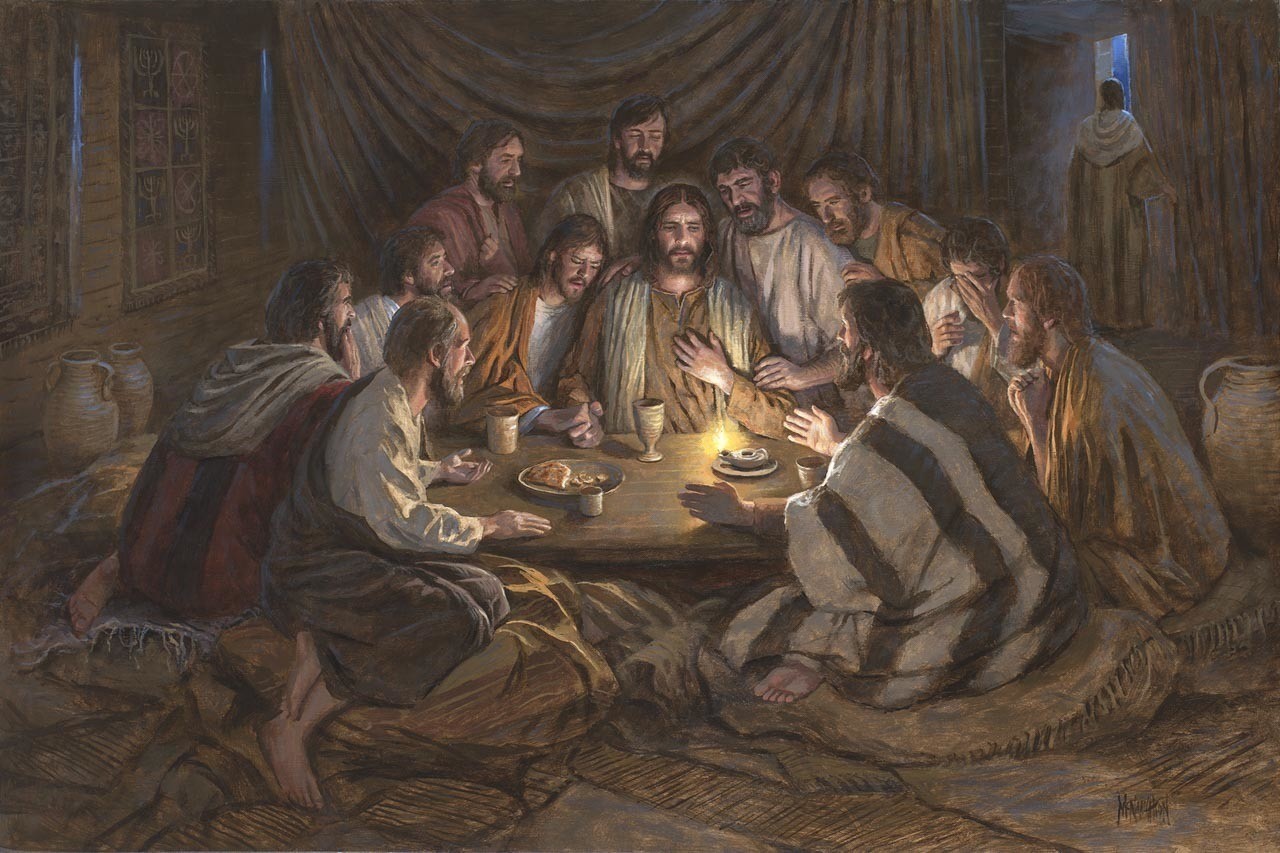 Join us this evening at 7 p.m. as we share Holy Communion and read the story once more with a Tennebrae service.  Our reading is longer today as I invite yourself to immerse yourself in the story at the heart of our faith.

Then came the day of Unleavened Bread, on which the Passover lamb had to be sacrificed. So Jesus sent Peter and John, saying, ‘Go and prepare the Passover meal for us that we may eat it.’ They asked him, ‘Where do you want us to make preparations for it?’ ‘Listen,’ he said to them, ‘when you have entered the city, a man carrying a jar of water will meet you; follow him into the house he enters and say to the owner of the house, “The teacher asks you, ‘Where is the guest room, where I may eat the Passover with my disciples?’ ” He will show you a large room upstairs, already furnished. Make preparations for us there.’ So they went and found everything as he had told them; and they prepared the Passover meal.

We are given the impression here that Jesus has orchestrated everything in advance for a clandestine nighttime entrance into Jerusalem.   “A man carrying a jar of water” would have stood out in the crowds because normally this was the work of women.  Peter and John could spot him easily and follow him discreetly.  Because of those who want Jesus dead the location of the room must be kept secret.  An “upper” room would be more private since it would be difficult to see in through the windows.

When the hour came, Jesus took his place at the table, and the apostles with him. He said to them, ‘I have eagerly desired to eat this Passover with you before I suffer; for I tell you, I will not eat it until it is fulfilled in the kingdom of God.’ Then he took a cup, and after giving thanks he said, ‘Take this and divide it among yourselves; for I tell you that from now on I will not drink of the fruit of the vine until the kingdom of God comes.’ Then he took a loaf of bread, and when he had given thanks, he broke it and gave it to them, saying, ‘This is my body, which is given for you. Do this in remembrance of me.’ And he did the same with the cup after supper, saying, ‘This cup that is poured out for you is the new covenant in my blood. But see, the one who betrays me is with me, and his hand is on the table. For the Son of Man is going as it has been determined, but woe to that one by whom he is betrayed!’ Then they began to ask one another which one of them it could be who would do this.

What we call “the Last Supper” was a traditional Passover meal transformed by Jesus with the words he spoke that night.  The bread broken symbolized Jesus’ body broken on the cross and the cup poured out the blood he shed. A new covenant between God and humanity was in the process of being established.

Even in this moment of intimate communion, human sin is present.  Judas, pretending to be one of the faithful, is present at the table scheming Jesus’ arrest.  Jesus knows who will betray him, but the other disciples do not, and their insecurities are triggered.  Each of them wonders if it could be he himself that Jesus is referring to.  Their insecurity leads to an argument about who is the most faithful among them.

‘Simon, Simon, listen! Satan has demanded to sift all of you like wheat, but I have prayed for you that your own faith may not fail; and you, when once you have turned back, strengthen your brothers.’ And he said to him, ‘Lord, I am ready to go with you to prison and to death!’ Jesus said, ‘I tell you, Peter, the cock will not crow this day, until you have denied three times that you know me.’

This is one of the very few stories that are found in all four Gospels: the denial of Jesus by Simon Peter three times.  Peter declares his willingness to go to prison and death with Jesus; but he will soon discover he is not as strong as he wants to believe he is.

We all have our breaking points.

Luke alone has Jesus specifically command Simon Peter to turn back and strengthen his brothers after he arises from his fall. With his own experience of falling and by the grace of God getting back up again Peter will be able to speak words of encouragement to others when they likewise stumble.

Jesus came out and went, as was his custom, to the Mount of Olives; and the disciples followed him. When he reached the place, he said to them, ‘Pray that you may not come into the time of trial.’ Then he withdrew from them about a stone’s throw, knelt down, and prayed, ‘Father, if you are willing, remove this cup from me; yet, not my will but yours be done.’ [Then an angel from heaven appeared to him and gave him strength. In his anguish he prayed more earnestly, and his sweat became like great drops of blood falling down on the ground.]

Once again, Jesus prays.  He loves life; he does not have a “martyr complex”, and so he asks for this cup – his suffering and death that will shortly commence – be removed from him.  But he concludes with submission to God’s will.

The portion in the parentheses was not included in the earliest manuscripts and is thought to be a later addition, not written by Luke.

When (Jesus) got up from prayer, he came to the disciples and found them sleeping because of grief, and he said to them, ‘Why are you sleeping? Get up and pray that you may not come into the time of trial.’

While he was still speaking, suddenly a crowd came, and the one called Judas, one of the twelve, was leading them. He approached Jesus to kiss him; but Jesus said to him, ‘Judas, is it with a kiss that you are betraying the Son of Man?’ When those who were around him saw what was coming, they asked, ‘Lord, should we strike with the sword?’ Then one of them struck the slave of the high priest and cut off his right ear. But Jesus said, ‘No more of this!’ And he touched his ear and healed him. Then Jesus said to the chief priests, the officers of the temple police, and the elders who had come for him, ‘Have you come out with swords and clubs as if I were a bandit? When I was with you day after day in the temple, you did not lay hands on me. But this is your hour, and the power of darkness!’

Jesus’ insistence on “the things that makes for peace” continues as he rebukes the disciple who resorts to violence, cuts off the ear of the high priest. Luke alone includes Jesus’ healing of the slave.  His compassionate healing ministry continues even here in the moment of his arrest.

Then they seized him and led him away, bringing him into the high priest’s house. But Peter was following at a distance. When they had kindled a fire in the middle of the courtyard and sat down together, Peter sat among them. Then a servant-girl, seeing him in the firelight, stared at him and said, ‘This man also was with him.’ But he denied it, saying, ‘Woman, I do not know him.’ A little later someone else, on seeing him, said, ‘You also are one of them.’ But Peter said, ‘Man, I am not!’ Then about an hour later yet another kept insisting, ‘Surely this man also was with him; for he is a Galilean.’ But Peter said, ‘Man, I do not know what you are talking about!’ At that moment, while he was still speaking, the cock crowed. The Lord turned and looked at Peter. Then Peter remembered the word of the Lord, how he had said to him, ‘Before the cock crows today, you will deny me three times.’ And he went out and wept bitterly.

The charge of being with Jesus is serious; Jesus was charged with political treason and if Peter is identified as a companion of Jesus, the same charge can be brought against him.  Terror overcomes Peter.

Luke alone has Jesus present in the courtyard at Peter’s betrayal, having the two make eye contact after Peter’s third denial.

Now the men who were holding Jesus began to mock him and beat him; they also blindfolded him and kept asking him, ‘Prophesy! Who is it that struck you?’ They kept heaping many other insults on him.

It is still night.  As Luke tells the story, Jesus does not appear before the chief priests until Friday morning.

Conclude pondering the darkness of this day.  The disciples could not stay awake.  Both Judas and Peter have betrayed Jesus.  In what ways do we betray Jesus?  Pray all those who are in prison anywhere in this world. Pray for the courage to take stands for God’s kingdom.