John 20:19-31 — More Wisdom for Living through the Pandemic from the Story of Jesus’ Appearance to Disciples Huddled in Fear behind Locked Doors 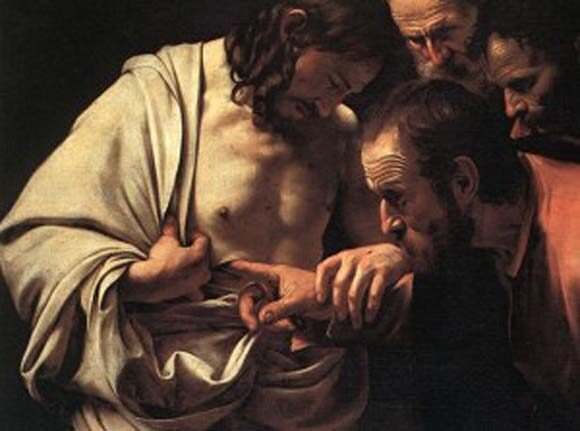 A sermon preached on April 19th, 2020 based upon John 20:19 – 31, entitled “More Wisdom for Living through the Pandemic from the Story of Jesus’ Appearance to Disciples Huddled in Fear behind Locked Doors.”

So we continue the story in the Gospel of John.  You will recall what happened last week – how Mary Magdalene stood weeping all alone in the garden of the tomb – weeping for her beloved Jesus who had been so brutally killed. Having found the empty tomb Mary had assumed that to add insult to injury finding somebody had stolen his body – making it impossible like so many today in the midst of the quarantine to have a proper funeral. A man she had taken to be the gardener asked her why she was weeping, and when he called her by name, her eyes were opened and she suddenly recognized it was Jesus.  She tried to give him a big hug, but he hadn’t permitted her to – another reminder of the times we live in where physical contact with people we love isn’t permitted.

Nonetheless Jesus gave Mary the gift of joy — just as he had promised in that upper room the night before he died.  She ran to the male disciples and shouted, “I have seen the Lord!”

But now it is evening, and what Mary has told them – it doesn’t seem to have penetrated the disciples very deeply. We pick up the story in the 20th chapter beginning in the 19th verse.  Listen for the word of the Lord.

When it was evening on that day, the first day of the week, and the doors of the house where the disciples had met were locked for fear of the religious authorities…

Sounds strangely familiar, doesn’t it?  People locked inside their houses because of fear – because of the threat that awaits them outside.  In spite of having heard Mary’s testimony, fear remains the defining emotion of their lives – the one that calls all the shots.

Again, Jesus had promised in that same upper room the night before he died that he would leave them with peace.  Now he suddenly appears to fulfill his promise.

Notice also, that this peace he gives isn’t an external peace.  In a certain sense, the world the disciples live in hasn’t changed.  It is still a violent world where people filled with hatred – perhaps a hatred arising from fear – are a threat to their physical survival.

The peace Jesus gives them is an internal peace — kind of like the eye of a hurricane.

And I would simply invite you to consider the possibility that in the midst of fear, the peace of God, the “peace which passeth all understanding” – can mysteriously descend upon your heart, making it possible that fear calls the shots in their lives.

As the Father has sent me, so I send you.’

Notice this:  this gift of peace given by Jesus carries with it a sense of mission – of higher purpose in serving others.

On the deepest level, that is what we all yearn for – a sense of meaning and purpose.

We have lived in a society where too often we miss this truth.  We have sought after comfort and security, and neglected the higher purpose of being an instrument of God’s love.  Perhaps this epidemic is an opportunity to realize that meaning and purpose is a whole lot more important than comfort and our usual notions of security.

Jesus empowers them with the Holy Spirit and gives them authority to forgive sin.

So many people of us live our lives feeling unworthy of love. Beneath that sense of unworthiness are feelings of guilt and shame.

Are there people in your life who need to experience forgiveness — people for whom you are uniquely positioned to communicate forgiveness?

It is striking though that Jesus also mentions the possibility of “retaining sins.”  There are times when people live out patterns of abuse and oppression of others without taking responsibility for the harm they are doing.  We are empowered to call out such wrongs in the hope that they will repent.

But Thomas (who was called the Twin*), one of the twelve, was not with them when Jesus came. 25So the other disciples told him, ‘We have seen the Lord.’ But he said to them, ‘Unless I see the mark of the nails in his hands, and put my finger in the mark of the nails and my hand in his side, I will not believe.’

Thomas gets a bad rap.  “Doubting Thomas” we call him.  But there’s no indication the other disciples truly believed Mary either when she told them the same thing: “I have seen the Lord.”

In my mind, Thomas deserves credit for his honesty – a certain integrity – in his refusal to pretend to believe something in order to fit in.

And notice this:  Thomas truly loved Jesus.  He is suffering from Post Traumatic Stress Syndrome from what has transpired just two days earlier.  He knows how horribly Jesus suffered. What he wants see are the wounds on Jesus’ body, because he doesn’t want to pretend that the world really is all sweetness and light.

A week later his disciples were again in the house, and Thomas was with them.

There are two things I would point out here:

First, the other disciples didn’t shun Thomas because he wasn’t yet willing to believe what they believed.  They didn’t tell him to get in line – to stop his questioning – to close down his heart and mind.  They loved him where he was.

Too often our love is conditioned by our need to have others think, believe and feel the way we do. It is a mark of the Holy Spirit when we can love people where they are, without requirement them to reflect back to us our own beliefs. We are all at different places on our spiritual journeys.  John’s Gospel emphasizes the truth that faith comes to people in different ways.

Too many people – maybe especially young people – have been turned off by the church because they got the message, “Don’t question.  Just believe what we tell you to believe.”

Loving, supportive community is crucial for the spiritual journey.  The second thing I would point out here is that more often than not spiritual experiences happen in the context of a community.  There are the Marys of this world who experience the reality of God all on their own, but more often faith is absorbed by being around others who are live faith out.  That, I would suggest is what the other disciples did in the course of that week.   –

Although the doors were shut, Jesus came and stood among them and said, ‘Peace be with you.’ 27Then he said to Thomas, ‘Put your finger here and see my hands. Reach out your hand and put it in my side. Do not doubt but believe.’ 28Thomas answered him, ‘My Lord and my God!’ 29Jesus said to him, ‘Have you believed because you have seen me? Blessed are those who have not seen and yet have come to believe.’

I invite you to ponder the fact that the wounds on Jesus’ physical body are still visible on his resurrection body – the one that can pass through walls.

You might think that his resurrection body would have skin as fresh as that of a baby.  But no, the wounds are still visible.   In this instance, however Jesus’ wounds have become something beautiful.  They are the means by which Thomas recognizes Jesus – a reminder of the suffering he endured for the sake of love.

We tend to think of wounds – and here I am thinking more of emotional wounds – as something ugly, something shameful that need to be hidden away out of sight of others. We expend a great deal of energy pretending we are strong and have it all together.  We feel ashamed of our need for help.

I admire Thomas because he isn’t in a hurry to pass over the reality of Good Friday – that life often isn’t fair and suffering is unavoidable.   We will be wounded in the course of our lives, but when we give up the expectation that we should sail through life, paradoxically we find ourselves connected on a deeper level by the Risen One who’s body continues to show forth his wounds.

I am also reminded by the line from the Leonard Cohen song:
There is a crack in everything.
That’s how the light gets in.

We would do well to acknowledge our wounds to one another – that the struggle of this epidemic isn’t easy – that suffering is taking place in a variety of forms and that we are all in this together – knit together by a great web of love.  And quietly, mysteriously the Crucified and Risen Christ will appear to us in our fear behind locked doors and bless us with a mysterious peace.  Love, not fear shall prevail.