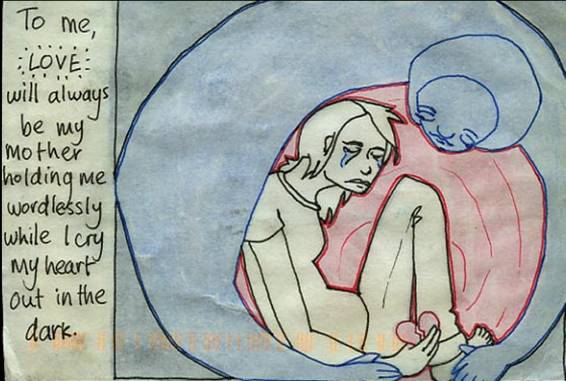 I was curious about the origins of Mother’s Day, so I did a little research. I found out that the person responsible for getting Mother’s Day established as a national day was a woman named Anna Jarvis, who was inspired by her own mother who was a peace activist who cared for wounded soldiers on both sides of the Civil War. Anna began a campaign to have a Mother’s Day holiday in 1905, the year her own mother died, and by 1911 she had succeeded.
Anna was disheartened however when six years later she watched as American mothers sent their sons off to die in yet another war – World War I — and soon became resentful of what she saw as the commercialization of the holiday. Mother’s Day, she said was about sentiment, not profit, and she was particularly irritated when in the 1920s Hallmark began selling Mother’s Day cards. She thought people should appreciate and honor their mothers through handwritten letters expressing their love and gratitude. Like her own heroic mother, Anna apparently had some spit and vinegar to her: she organized boycotts and threatened lawsuits, and on one occasion was arrested for disturbing the peace for a protest she was leading.

If you go to the store to buy a Mother’s Day card you will find no shortage of choices of styles from funny to poetic, but when it comes to the sentiment these cards expressed, it’s basically “one size fits all” – all variations on theme of “Thanks for being such a wonderful mom!”

But as I said last year, Mother’s Day is a hard topic address because of the wide range of emotions it evokes in different people.

For many of us it is a genuinely happy day, with heartfelt gratitude expressed by children, and for moms, appreciation for being appreciated.

But for others Mother’s Day can be a difficult day evoking darker emotions, and if I were to give a sermon that ignored this fact many of us would leave this morning simply feeling worse.

Relationships between mothers and children are complex.

Even for Jesus with his mother.

I had this fantasy of Jesus shortly after arriving in heaven searching for a card to send his mother still on earth and finding all the cards woefully inadequate sitting down to write his own.

Did I ever thank you for bearing the shame you endured from the neighbors in Nazareth when you got pregnant with me before your wedding day? And for how hard it must have been to ride to Jerusalem on a donkey in your final month of pregnancy and then give birth to me in that barn?

I’m sorry for that time on the trip to Jerusalem for Passover when I was 12 and I wandered off without telling you, scaring the living daylight out of you when for three days you couldn’t find me, and then for the snotty answer I gave you when you told me how frightened you were.

I’m sorry for that time when I had first started my ministry and you worried about my sanity and you came with my brothers to take me home and I said, “Who is my mother and my brothers? My real mother and brothers were the ones who did the will of my Father in heaven.”

How that must have hurt you.

And I’m sorry when I snapped at you at that wedding feast in Cana when you told me to do something about the wine running out, referring to you merely as ‘Woman!”

But Mom you forgave me all these things, and there you were at the cross to watch me die, suffering an emotional pain of a magnitude that matched the physical pain I endured with the nails that held me to the cross. Such wondrous love.

There is this hugely popular website called PostSecrets that each week posts pictures of hand written postcards people have sent in anonymously in which they share a “secret,” supposedly that they haven’t told anyone. Here are a few of the ones that have come in on the subject of mothers:

There are, of course the traditionally grateful ones:

And others a gratitude that only came later in life:

Some express a deep longing to become a mother that may not come to pass:

And others the wounds of apparent maternal rejection:

Others express the grief that arises on Mother’s Day within those of us whose mothers’ are no longer here with us on earth:
Some express a gratitude that is hard to speak aloud:

Some express the regret we anticipate knowing we so easily take our moms for granted:

Others express the frustration of mothers whose children don’t seem to appreciate what they went through for them:

And others the slow-to-recognize deep-seeded wounds sometimes sowed by mothers:

When Jesus drew near to Jerusalem, it was to an image of maternal love that he turned to express his great heartache of his great love for humanity:

“Jerusalem, Jerusalem,” he cried… “How often I have desired to gather your children together as a hen gathers her brood under her wings, and you were not willing.”

And when in the book of the prophet Isaiah God addressed people who felt as though they had been forsaken by God, turns to the image of a mother’s love for her child to express God’s passionate, unending love for God’s people:

“Can a woman forget her nursing child, or show no compassion for the child of her womb?”

But then acknowledging that mothers in their human frailty can at times forget their children or fail to show compassion God goes on to declare,

“Even though these may forget, I will never forget you. I have inscribed you on the palms of my hands.”

So let’s go back and finish that imaginary hand written card from Jesus to his mother still living on earth.

I want you to know it really is true: I am alive, and I love you with all my heart. It is so beautiful here. All is forgiven and there is nothing but love. And everybody is one big family where all the regrets and grievances have been let go. I am with you now, unseen. And one day you will join me here. Until that day, keep the faith, mom. And keep on loving with all your heart and soul and mind and strength.

Your ever grateful son,