Luke 2:1-20 — My Christmas Eve Sermon, and the Story of this Year’s Christmas Play 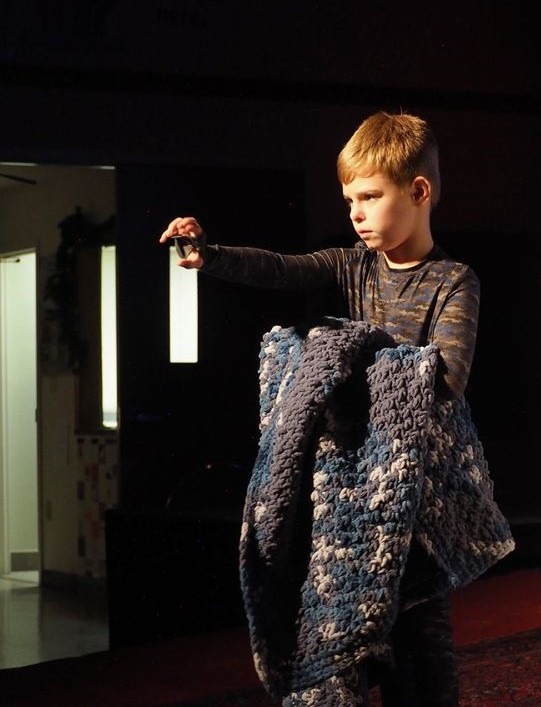 Each year I write a Christmas play with an elaborate plot line that arises somehow out of my imagination.  There is always something mysterious about the story that arises, with a clear sense for me that the Holy Spirit has a hand in what comes forth.  When the three performances are over the story continues to live inside me, and new insights continue to evolve.  So you’re a captive audience and tonight you will hear about the story of the play.

This may seem like a stretch but I played the part of a pastor of a congregation, Pastor Mike who can be a little gruff, a bit stiff at times – you might say he’s a bit out-of-touch with his inner child.  And sometimes he has doubts – he cannot grasp that he is surrounded by God’s eternal love and all the angels.

One night a loving grandma of the church named Jane appears to him in a dream shining with the radiance of heaven.   She has a message for Pastor Mike:  “The lambs are very frightened; they need to know.”

Pastor Mike awakens from his dream to discover that Jane has suddenly died and apparently on her way to heaven made a side trip to deliver him a message.

He remembers how the last words he had heard Jane speak were that he should invite a woman to speak at the church she had recently heard speak.  The woman is named Lorna Byrne (she’s based on an actual person) and she has been able to see angels since she was a little child.

Pastor Mike feels guilty that he poo pooed the suggestion, so he reaches out to Lorna (played by the incomparable Terry Germann with a Brooklyn accent instead of Lorna’s actual Irish one).  Lorna offers to come to his church to lead a workshop for children who are having nightmares and struggling with fear.

One of them is Julie, the granddaughter of Jane, played by Amber.  Julie is having nightmares since her beloved grandma’s death.

Another is a little girl named Charlotte, played by Abby, who is have a reoccurring dream in which she is standing in front of a door.  She reaches out to open the door and as she does she is terrorized by the sound of lion roaring on the far side of the door.  She pulls back in horror, awakened by her own screams.

So Lorna has the children and Pastor Mike play around with the wonderful old Christmas stories in which angels play a key role.

They remember how the Angel Gabriel appeared to a frightened young teenage girl named Mary, announcing to her that she was going to have a baby before her marriage to Joseph was consummated.  She is stunned by the news, and frightened, but the angel says “Don’t be afraid.”   God’s in charge here and this child will be of the Holy Spirit.

They recall how when Joseph heard about his fiancée’s pregnancy, he was greatly distraught.  But as he was planning how to end the engagement quietly, an angel appeared to Joseph in a dream and said, “Don’t be afraid.”  You have an important part to play in this child’s life.

And of course Lorna reminded them of how certain poor, cold, unwanted, homeless shepherds were watching their sheep one night when suddenly the angel of the Lord appeared to them, and the first thing this angel said, was “Fear not! For behold I bring you good tidings of great joy to all people” that comes in the form of a little tiny baby that they would find lying in a manger.

So that’s the consistent message of the angels; “Don’t be afraid.”

At the first workshop Lorna asks if any of the children would be willing to share a scary dream they’ve been having.  Only Charlotte can muster the bravery to do so.  Lorna tells Charlotte and the other children that they can invite their guardian angel to be with them in their scary dreams.

And then Lorna asks if they can pray for her, which they do.

Soon afterwards Charlotte has another dream in which the lion roars but she isn’t quite so scared because Charlotte senses the presence of someone who has always loved her.

Later in the play Charlotte has a third dream, which was probably the cutest scene of all, but the cuteness shouldn’t lead one to miss the underlying message of the scene.

Once more the lion is roaring at the door but this time Charlotte’s guardian angel, played by Austin, is standing right next to her. Austin asks, “Do you want to open the door?”

Austin replies, “A little, but not a lot.  With me beside you, do you think you can open the door?

“I think so,” says Charlotte.  She does, and briefly all heck breaks loose as the roaring lion, played by Conrad comes running down the aisle chasing a lamb, played by Sophia.  Together Charlotte and her guardian angel calm down the frightened lamb, and then the roaring lion and as they do the roaring changes to purring.

Other stuff happens in the course of the play about which I won’t force you to listen.  But worth mentioning, a lion teenager, played by Jake is bullying a lamb, played by Garin.

Unbeknownst to the two of them they both are plagued by the same scary dream about falling into a black hole.  Through the secret working of the Holy Spirit the bully acknowledges his hidden dreams and the two become friends.

Julie has a dream in which her grandmother appears to her and her anxieties give way to peace. And my character has more fun then he has had in years and has his heart strangely warmed.

But I want to come back to this character of Charlotte.

You are Charlotte.  I am Charlotte.  In the lives of each of us, there are doors we are frightened to open.  They come in a wide variety of forms.  I think you know what I mean.

I think the message of the angels — “Don’t be afraid” – are easily misunderstood.  We think, if I just had enough faith I would never feel afraid — nothing would scare me.  But that isn’t real life.  Life can be truly scary sometimes, and there’s no sense pretending it isn’t and the Christmas story is full of some of a lot of those scary thing.

The message of “don’t be afraid” might better be understood as “lean into courage.”

Courage isn’t being fearless.  It’s going ahead to and opening the door in spite of the sound of feeling afraid.  It means don’t let the fear win because fear holds us back from loving and to love is why we were born.

There’s a couple of interesting side stories with regarding the comforter that Abby held  in her dreams.  It was made by Abby’s great grandmother, Madeline Ormsbee who was a Jane-like person in this church for over fifty years until her death just over fifteen years ago.

Madeline also made the ceramic Nativity figurines that are on our alter every Christmas Eve.

Abby and her sisters never got to meet their great grandmother since she died eight years before they were born.

This past October we got the girls’ mother Kassie – Madeline’s granddaughter – to give the sermon.  At that point the Christmas play was already written.

In Kassie’s sermon she told a moving and mystifying story regarding a time in her life that might have been the darkest.  She was heartbroken over her inability to carry a child to term.  Kassie prayed one evening to God for some kind of sign.  That night she had a dream unlike any she had had before or since.  Her grandmother Madeline to whom she had been very close appeared to her in a dream and said, “Buck up, kiddo.  It’s going to be all right.”

And not long after that, the triplets were born.

Here is the message of Christmas in a nutshell.  God is with us.  We can open the door, because God is with us.  The grace is available to empower us to choose courage and not let our fears win.  Love wins.

And love is the only thing that is eternal.  In the Christ-child the eternal one has entered time.

Time is a funny thing.  We think of it as a straight line, but the physicists tell us that is actually an illusion.  Time warps. There is this strange sense I have that the usual perceptions of time fall away on Christmas Eve.

In normal chronological time, there are 363 days from the past year that are closer to me than the Christmas Eve of a year ago, but in a certain sense they all seem further away than last year’s Christmas Eve.

Tonight as we go through the once a year tradition of this beautiful service I feel closer to Bob Keller reading the old story as he did last year during this hour than I feel to the time I spent sitting beside Bob’s bedside in the hospital three days ago, just hours before his participation in ordinary, earthly time ended.  We touch eternity tonight with all the love of which it is made, and I feel the presence of Bob and Madeline and all the saints who have gone before us into the eternal light and love of eternity.  And I draw courage from them – they who modeled courage on their days here on life.

I am mindful that some Christmas Eve in the years to come I will no longer be here in time; we will all enter into the great ocean of love and light.

In the meantime, be not afraid, lean into courage, let your hearts open to the love that birthed us and the love into which we will all on day return.