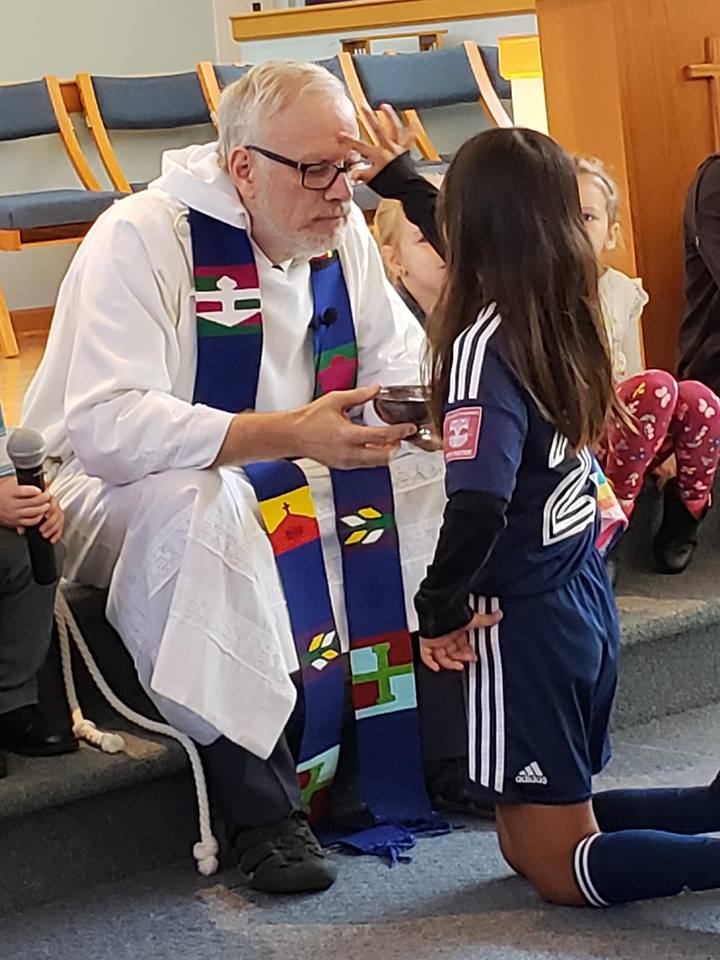 One reaction I had to this passage was to think how it can be used to provide fodder for some of the worst excesses of the TV evangelists:  James reference to Elijah’s prayers seeming bringing first drought and then rain conjured up Pat Robertson’s claim of having sent a hurricane out to sea through his personal prayers. The certainty of the efficacy of prayer to bring healing that James seems to express calls to mind the sort of cruelty wrought in the name of Jesus that John Oliver called to attention to on his expose:  TV evangelists telling people viewing them at home not to avail themselves to the help that modern medicine has to offer when they are diagnosed with cancer but rather to send their “seed” money to their TV ministry as expressions of faith that the televangelists assure them will bring a cure to their cancer.  This is a particularly heinous form of sin.

But that’s not what this passage is about.  The deeper meaning of this passage is especially relevant now in this age of ever increasing isolation where people often find what little human connection they have from disembodied online “communities.”  James reminds us of the healing power of a flesh and blood community of people willing lovingly to be there for one another.  He reminds us the importance of belonging to a community of people where a deep trust exists that allows us to be honest with one another, freely confessing our sins that we might  experience forgiveness, to own our failures and flaws without the fear of abandonment.    There is an expression in AA, “We’re only as well as our secrets,” which is to say that when we have secrets that we feel ashamed to share there is a kind of spiritual brokenness that cannot find healing.  James reminds us that although there is no guarantee that we will receive what we pray for, that prayer as an expression of love is indeed extraordinarily powerful.

What the passage also invites us to be mindful of is the embodied nature of our existence.  Sometimes the mind and body, or the soul and body are viewed as distinctly separate things, but a truly Biblical view of the human person reminds us that our bodies, minds and spirits are inseparable, and what effects our souls impacts our bodies, and what afflicts our bodies impacts our spirits.

And so James instructs us that if we feeling good to express our joy in the flesh and blood of our bodies through singing.  And if we are sick, to call the elders of the church to gather around us anoint us with oil, laying their hands upon us in prayer.  I am struck by the embrace of physicality expressed here:  we need loving touch as a means to experience healing.  When James speaks of “elders” I think a good way to think of such is of people with a well developed capacity for love, which means the capacity to set their egos aside to allow themselves to be channels of God’s grace. In some instances, an elder could be a child.

Our “passing of the peace” is a crucial part of our liturgy, giving opportunity to use our bodies as instruments of mutual blessing, speaking one another’s names aloud as we gaze directly into one another’s eyes, exchanging either hand shakes or hugs as seems appropriate.

Recently we have been reminded of the destructive power of unwanted touch; specifically of sexual assault and it’s capacity to leave psychic wounds that can last a life time, and so we need to be mindful to touch only when we have been granted permission to do so, and to be sensitive to the message conveyed both verbally and non-verbally regarding the desire of the other to be touched.  But one of the unfortunate impacts of the sin of sexual assault as well as of the sin of homophobia is that it creates an atmosphere where people are reluctant to touch at all.  Men especially can be particularly guarded in offering loving touch to one another, and perhaps one of the attractions of sports is that it provides a socially acceptable avenue for men to hug other men.

All of us have a deep need to be touched lovingly.  Most of us are familiar with the sad stories of orphans beginning their lives in understaffed orphanages, how they bodies fail to grow and their immune systems weakened, how their brains fail to develop and their capacity for bonding to others hampered for the rest of their lives. The story of the neonatal ICU Grandpa I spoke about with the children is so moving.  He volunteers his time twice a week to do nothing other hold little premo babies and pour love into them, and what is particularly powerful regarding his testimony is that the healing power of love flows in both direction:  the ICU Grandpa is blessed by his physical contact with the babies’ skin.

It’s foolish to imagine that just because we are “grown up” we no longer need to experience loving touch.  I played a Ted Talk to the men recently in which a doctor argued that although much is gained by the technological advances of modern medicine, something is lost when in deference to these technologies the sacred ritual of an unrushed personal physical examination that includes touch often is neglected, and when this happens something crucial is lost.

A week ago Friday I went to Morristown Medical Center to visit Maidie before she underwent surgery.  I met Jessica and Maidie’s aunt in the waiting room while Maidie was being prepped and before long we were allowed to visit her.  As we entered, various doctors and nursing staff, all with a demeanor of kindness and professional competency came and went quickly.  We are fortunate to live so close to one of the best cancer hospitals in the country.  The cancer center includes on their staff practitioners of what is called alternative medicine, and soon after we arrived a woman who does what is called “energy work” or therapeutic touch came by, her services having been requested by Maidie.  Maidie introduced us all, and in order to make my positive attitude towards this woman’s work clear I referred to it as another form of “prayer.”  The woman smiled and encouraged me to go ahead and offer my more traditional form of prayer as she preceded to do what she had come to do.  We watched as with a clearly loving intent she began by gently touched Maidie after which she proceeded to slowly pass her hands six inches above Maidie’s body in a very mindful way seeking to encourage the flow of energy through Maidie’s body and “aura”, the energy field that extends beyond a person’s skin.  Alternative medicine like this is often considered “pseudo science” which simply means its theory and practice hasn’t’ undergone the rigorous scientific testing that traditional medicine requires, but there was no mistaking the fact that as this woman lovingly went about her work a great peace descended upon Maidie and all of us.  Midway through the woman’s energy work I clasped Maidie’s hand and vocalized my Christian prayer. There was a rich sense of blessing present in the room.  To go into surgery is anxiety inducing, but Maidie entered surgery that afternoon clearly calm and at peace.

Many times in the Gospels Jesus is described lovingly touching people.  The little child he held in his arms when the disciples were being carried away with their worldly ambitions.  The deaf man in whose ears Jesus placed his fingers.  The woman with the flow of blood who came Jesus to touch him and in doing so, Jesus felt healing energies go forth from his body.

At the heart of the Gospel is the idea of incarnation – that in Jesus the Word became flesh.  Together we now are the Body of Christ, which means among other things that we can offer our hands to Jesus to be his hands in this world.

On the third Thursday of every month Andee, Charlie, Pat and I go to the local nursing home where I lead a worship service for the wheelchair bound residents there.  They put up with my preaching and such but what I think they really appreciate is what we do at the end.  We go to each person to pray over them, inviting the others present to pray along with us.  We ask permission to touch them, and we offer our hands to Jesus, and I speak a prayer in response to their spoken needs.  My impression is they hunger for this kind of loving touch – that it blessing them in body and spirit.

Sometimes touch can express love in a way that words cannot.  One of my favorite spiritual writers is Parker Palmer.  Parker has written about having undergone a couple of episodes of clinical depression in his life.  He described the first time this occurred he was living in a Christian community.  Many people expressed their love and concern for him, but some peoples’ expressions were less helpful than others, indeed sometimes causing more harm than good.  For people who don’t understand how powerful the death grip of the dark cloud of depression can be at times, certain words meant to be encouraging can be leave the depressed person feeling simply all the more isolated and misunderstood.

Parker described one friend who was consistently a blessing during this period of time.  He would stop by regularly for short visits late in the afternoon.  He would speak very few words.  Instead, his routine was to sit down in front of Parker, take off his shoes and socks and spend twenty minutes massaging Parker’s feet.  This simple Christ like act moved Parker deeply.

If you were present for the memorial service for Justin’s twin brother John I expect you were struck as I was of the mystery of the distinctive paths lives can take. Although John had a deep capacity for love, loyalty and courage, for reasons often beyond his control in John’s life led him overtime to an increasingly isolated place, with his primary connection to others being through the internet.  Justin, in contrast has a wife and five children who give him lots of hugs and other expressions of love that include a wife nagging him to make healthy food choices, and a church family that adds another layer of love and hugs and prayers and blessing.  It all registers in the body and the soul.

This afternoon our church will once again have a table at the Parsippany Street Festival.  Inspired by this passage, I’ve printed out a sign that says, “If you would like to have a pastor pray for a concern for a loved one, or for yourself, please stop by.”  I suspect there are people passing by who are carrying burdens for others and for themselves who will (if they can overcome their self-consciousness) stop by and allow me to hold their hand as I pray for whatever it is that is troubling them.  Feel free to stop by and join me.  There is a great hunger in this world for loving, prayerful touch.