Matthew 6:25-33 — Our Thrashing about and the God Jesus called Father 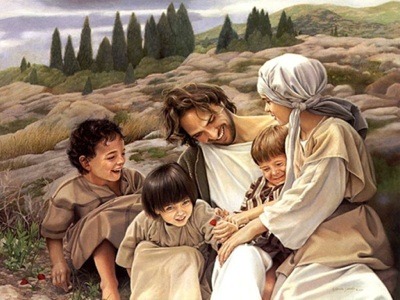 Jesus spoke of God — that great mystery out of which all life, all creation came – as “Father.”

In the patriarchal society in which he lived, it would have been impossible really for him to speak of God as “Mother”.  In a culture where women were seen as inherently inferior to men, to address God as mother would have seemed like an absurdity – an insult to the greatness of God.

But the “Father” Jesus pictured when he spoke of God was one that exploded the social norms of his day.  Child-rearing was seen as primarily the task of mothers, with “breadwinning being the domain of fathers.  It was only later, when the sons (but not the daughters) got older and were ready to begin to go out into the world and learn about the work of men – only then did the father become what we might call today a “hands-on” in child-rearing.

However, the “father” Jesus conjured up in speaking of God broke these stereotypes. Yes, he contained what we think of as traditionally masculine qualities – he was the strong defender and provider of his children.   But he was also “Abba” – the first sounds arising from a child’s mouth – the tender, affectionate Daddy who happily holds the child in his lap – the Daddy who knows the child intimately from the very beginning of life, knows their needs before the child even asks, including knowing that what a child often thinks she or he wants is not necessarily what they actually need.

The mindset of the day and the way Jesus broke out of it is expressed in the familiar story in which we hear of little children being drawn to Jesus, seeking physical contact with him, sensing an adult male who welcomed their company. The disciples, however bound by traditional notions try to keep the children from coming to him.  “Let the children come to me;” says Jesus, “do not hinder them.” And they crawled right up into his lap as though he were a mother.

In what is perhaps Jesus’ most famous parable of all, the father of the prodigal son behaves more like a traditional mother than what was expected of a father.  Once the rebellious son brought shame upon the family by taking his share of the inheritance before his father’s death and leaving home for a life of riotous living – any self-respecting father of the day would have cut the son off from that point on. At best the boy would have to slowly “win” back the father’s love.

But that’s not what father in Jesus’ parable is about.  He keeps watch every day for the possible return of the son for whom his heart aches.  And when one day he finally sees his son limping home, he runs out to meet him.  In those days, a mother might well do such a thing, but never a father.  It was just undignified.

And notice also the father in this parable is one who gives his son the freedom to make choices – even when the choice is likely to turn out badly as it did for the prodigal son.  The father is there for counsel – but not to control.  This father knows that some lessons are only learned through making mistakes that bring serious pain.  He gives his son the freedom to wander far from home, conscious of the fact that we often fail to understand the importance of home until for a time home is lost.

Nonetheless the father’s in Jesus’ parable is one willing to be vulnerable – his capacity for suffering profound precisely because of the love he has for his son.  He is a father who grieves over the pain the bad choices have caused his son.

This, Jesus is saying, is the nature of the God who created us:  A father here to help, but not to coerce and control; a father who has compassion for our pain; a father worthy of our trust.

All our anxiety about the possibility that we won’t get what we really need just gets in the way of the desire of the father to provide for our needs.

There are these videos online – perhaps you’ve seen one – in which some wild animal gets trapped in something – and well-intentioned humans try to help them.  I saw this one last week in which a relatively small black bear got its head caught inside a bucket.  Totally blind, the bear was thrashing about in utter panic.  Several men persist in trying to help the bear, but it isn’t easy because the bear resists all their attempts to help it.  Finally the bear, exhausted from all its thrashing about seems to let go, and the men are able to saw the bucket off the bear’s head.  Finally set free, the bear runs off, not pausing to say thank you, oblivious of all the work of love that the humans performed to set it free.

Watching the video, it occurred to me that more often than not we are like that bear, resisting the attempts of God to come to our aid and provide for us what we need.  Our anxiety is the thrashing about that makes it all the more difficult to take off the bucket that is stuck on our head, blinding us.

We need to learn how to trust, and learn to follow the subtle leadings of the one who ultimately does hold us in the palm of his/her hand.

Five hundred years before Christ, the Greek Philosopher Plato wrote an allegory of a cave in which human beings spend their whole lives in chains forced to stare at the wall before them.   Shadows images appear on the wall, cast from the light of a fire behind them.   Knowing no better, the humans take the flickering shadow images to be reality, when in fact they are but dim reflections of reality.

In Plato’s allegory, one day a human gets free from her chains.  She discovers the fire, and more, she leaves the cave where she gazes upon the reality of objects in this world in all their beauty, and discovers the infinitely greater light of the sun.

She goes back into the cave to tell the other humans who remain compelled to stare at the wall what she has discovered, but they think she is crazy.  No, they are certain, the shadows are reality.  This is all there is.

We might think of Jesus as the one who has broken free from the chains and seen what is real, but we refuse to believe what he has come to tell us.

Jesus tells us that the Creator of the universe is actually a strong and tender father who loves us absolutely and knows what we need better than we know ourselves and so we don’t need to thrash about in anxiety.  But we say that’s foolishness. Of course we must be worried about what we will eat and what clothes we will wear, because if we don’t worry about these things we won’t survive!

Jesus tells us that God is a loving father who honors our freedom and refuses to run roughshod over it.  He gives us space to thrash about in our anxiety if that’s what we insist.

But what God really wants to do is help us find our way safely home, but we resist the thought tooth and nail, preferring to go our own way – to make in on our own.

But deep inside we sense something of the truth.  We feel the impulse that moves us to love.

The vast majority of us who have been called to be fathers in this life have felt this powerful and at times painful tenderness move through us towards our child – a sign of the father’s love for all creatures.

A while back I sat with a father as he told me with great pain in his voice of the problems his child was having at school, the child’s unsuccessful attempts to connect to other children – the child’s frantic thrashings that were being altogether counter-productive and leaving him feeling painfully alone and rejected.

The father had done all he could think of to help his child, but he recognized the limits to what he could do.  He couldn’t compel his child to let go and the thrashing about it inspired; he couldn’t force serenity in the way he approached his classmates. The pain the father felt for his son was a holy pain, akin to that of God watching us all thrash about with our inability to trust.

Like the prayers our children read earlier, we succeed to greater or lesser extent in carrying out our calling.  But even those of us who by the standards of this world do a decent job in filling the role of father, we know there are times when we fall short, we miss the mark, times in which in various ways we wound our children, passing on to them our own shortcomings.

If we understand what Jesus is saying, in Plato’s allegory, we human fathers are but dim reflections of the real thing, which is what Jesus called our “Heavenly Father” – the Great Abba of us all.

The Apostle Paul in his great love chapter (1st Corinthians 13) says that “now we see in a mirror dimly, but then face to face.”  We are in the realm of shadows, but one day we will see the pure light of God’s love face to face.  We will breathe our last breath and with our spirit humbled, we will find ourselves welcomed into what is our one true home.

In the meantime, our task in this life is to learn through many mistakes and stumblings — humblings that open us up to grace, how to love more like that the Great Abba, whose heart was revealed in Jesus who said, “Let the children come unto me, for to such belongs the kingdom of God.”