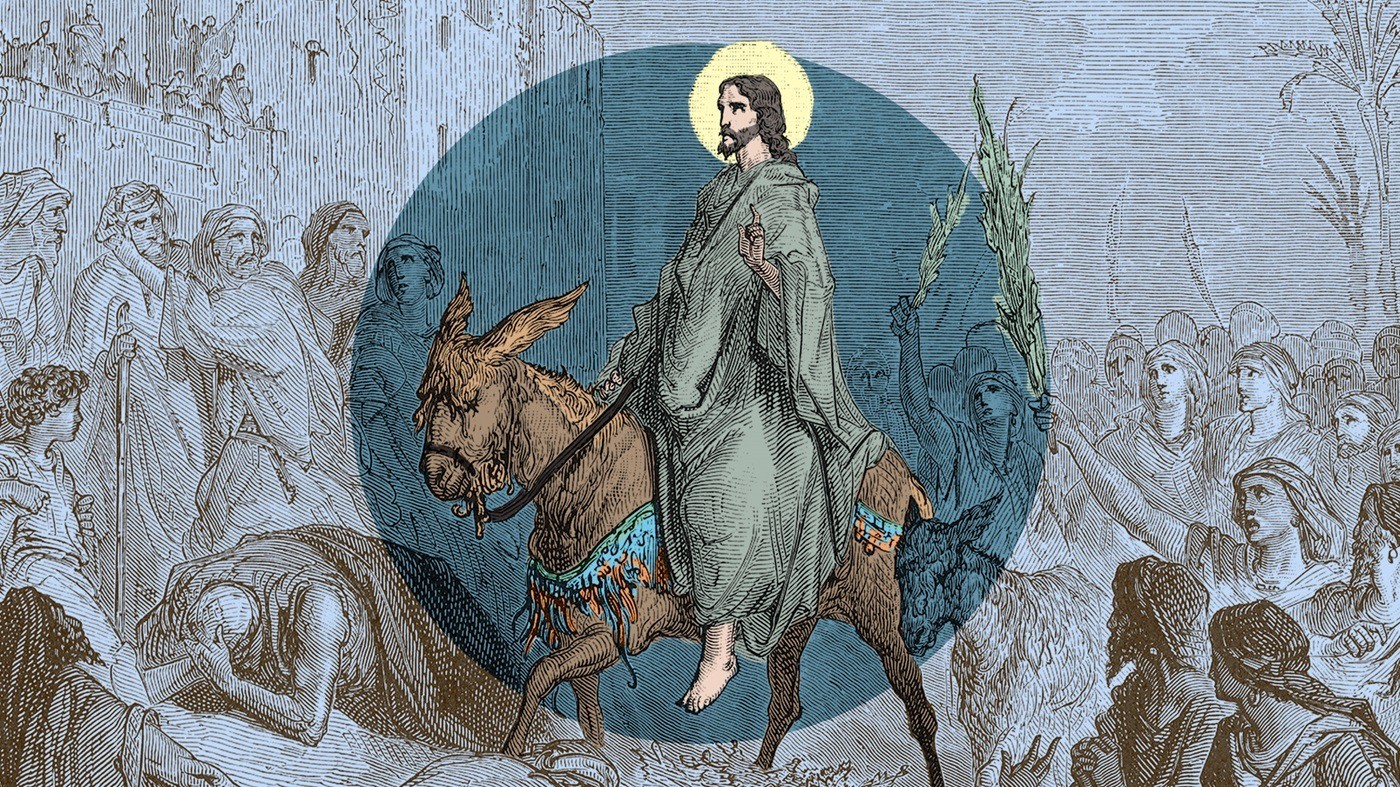 We continue with the reading from yesterday.  Jesus rides into the city on a donkey, fulfilling the words of Zechariah 9:9:  “The coming of Zion’s King – See, your king comes to you, righteous and victorious, lowly and riding on a donkey, on a colt, the foal of a donkey.” In the ancient Near East, it was common to cover the path of someone worthy of the highest honor.  (Only John’s Gospel speaks of palms.)

Then they brought (the young donkey) to Jesus; and after throwing their cloaks on the colt, they set Jesus on it.
As he rode along, people kept spreading their cloaks on the road.
As he was now approaching the path down from the Mount of Olives, the whole multitude of the disciples began to praise God joyfully with a loud voice for all the deeds of power that they had seen,
saying, “Blessed is the king who comes in the name of the Lord! Peace in heaven, and glory in the highest heaven!”
Some of the Pharisees in the crowd said to him, “Teacher, order your disciples to stop.”
He answered, “I tell you, if these were silent, the stones would shout out.”

In Luke’s version, Jesus is met be “a whole multitude of disciples.”  Luke’s Gospel refers to a great many disciples beyond the inner circle of the twelve.  Their cry echoes our psalm of the week (118:26), but also something else:  the words of the multitude of angels that appeared to the poor shepherds at Jesus’ birth.  Clearly something wondrous is happening here, though the only one who understands the true significance is Jesus.  As we heard three weeks ago, when the Pharisees sought to dissuade Jesus from going to Jerusalem because of Herod’s evil intentions, once more the Pharisees are fearful regarding the outcome of Jesus’ arrival.  The Pharisees recognize the danger of the crowd’s cries proclaiming Jesus as “king.”

The Pharisees are, at this moment more reality-based than the “disciples.”

And yet as the risen Jesus will later point out to the heart-broken disciples on the road to Emmaus, there is a bigger picture than the disciples’ are not capable of seeing at the moment.  What is transpiring here is revealing the ultimate truth, which is that the love of God is more powerful than the power of the high priests and the Romans and their threat of death.  The lost will be found.  God’s love will overcome.