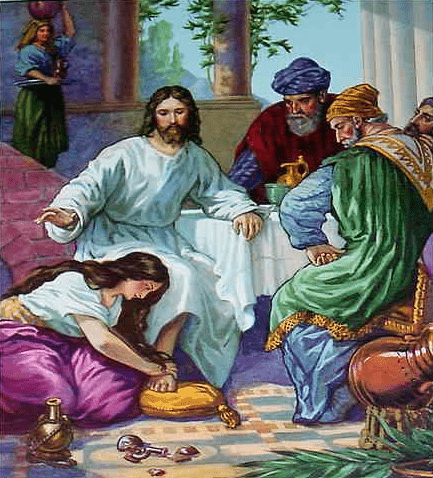 We pick up yesterday’s story in which Mary anointed the feet of Jesus with perfume at a dinner party her family was hosting just six days before his death.  The perfume was extraordinarily expensive and filled the whole house with its fragrance.  Immediately Judas seeks to shame Mary.

But Judas Iscariot, one of his disciples (the one who was about to betray him), said,
“Why was this perfume not sold for three hundred denarii and the money given to the poor?”
(He said this not because he cared about the poor, but because he was a thief; he kept the common purse and used to steal what was put into it.)
Jesus said, “Leave her alone. She bought it so that she might keep it for the day of my burial.
You always have the poor with you, but you do not always have me.”

Mary’s spontaneous act is a kind of artistry that reveals the deeper meanings of what is happening – both the unrecognized grief and the super-abundant grace of God present in that grief.  She acts with an inner authority that comes from following the leading of the Holy Spirit.   Mary embodies an inner freedom – she takes her cues from the truth rising up inside her and will not be in bondage to the need for the approval of others.

There is a sensual quality to Mary’s act; rubbings Jesus’ feet with the ointment and then drying them with her hair.   She is breaking taboos here.  Judas quickly demonstrates the risk involved for a person like Mary to act out of such freedom – that what she does will easily be misunderstood, criticized, belittled.  Judas lashes out at Mary.  “The ointment should have been sold and the money given to the poor.”   Under normal circumstances this would be a valid point that Jesus would support, but this is not a normal situation.  Jesus is getting ready to die.

And Judas is insincere.  There is a kind of bondage we can suffer under in which we resent others shining their light because we feel the need to keep our light hidden under a bushel.  In this dark place of bondage, Judas feels a perverse need to humiliate Mary – “to put her in her place.”

But Jesus stands up for Mary, silencing the shaming voice of Judas.  Jesus affirms the expression of love that he has received from Mary.  Mary alone perceived the depth of his need to be cared for in this way.

“You will always have the poor with you,” is a saying of Jesus that has been twisted to imply that we are off the hook for caring for the poor.  In fact, it assumes precisely the opposite.  Under normal conditions caring for the poor should be a top priority.  It is in the poor that we meet Jesus.

Usually if we look clearly enough, we can recognize something of every Biblical character inside ourselves.  Is there something of Mary inside you, moved to do something others may not understand or approve of, in faithfulness to the leading of the Holy Spirit?

Is there something of Judas there as well, jealous of the freedom and spontaneity of others to shine their light?

And can we find within us Jesus — the one who defends the emerging radiance of others in the face of scorn?