Saturday, March 23 — There Is Need of Only One Thing 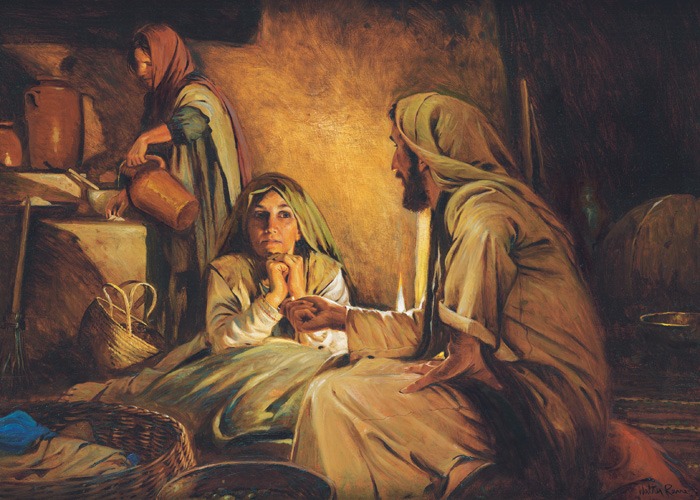 Saturday, March 23 — There Is Need of Only One Thing

Today we will read an another passage from Luke’s Gospel – one that comes directly after what is possibly Jesus’ best known parable, that is commonly referred to as “The Good Samaritan.”  In that story a foreigner — one typically despised by Jesus’ Jewish listeners — is praised by Jesus for taking the time to care for a Jewish stranger who lies dying at the side of the road. Two professional religious guys of the wounded man’s same race and religion don’t stop to help but just walk on by. With that in mine, read what comes next. Once again there is sibling rivalry.

Now as they went on their way, he entered a certain village, where a woman named Martha welcomed him into her home. She had a sister named Mary, who sat at the Lord’s feet and listened to what he was saying. But Martha was distracted by her many tasks; so she came to him and asked, ‘Lord, do you not care that my sister has left me to do all the work by myself? Tell her then to help me.’ But the Lord answered her, ‘Martha, Martha, you are worried and distracted by many things; there is need of only one thing.  Mary has chosen the better part, which will not be taken away from her.’

This story is typically one of the least favorite of oldest sisters and others whose natural inclination is to roll up your sleeves and get to work making sure the practical stuff gets done that communities rely upon.  Martha the doer is reprimanded, while Mary the slacker is praised.

Such resentment is surely understandable.  Add to this, the fact that the parable immediately before, praises somebody for what he did – he rolled up his sleeves and got to work helping a man in need.

So what does this story and the parable of the Good Samaritan have in common?  I would suggest it has to do with perceiving reality clearly.  Although the Samaritan who stops and the two religious guys who pass on by are all described as “seeing” the man at the side of the road, only the Samaritan recognizes the sacred mystery of a human being whose pain calls out to him, evoking a response of compassion.  The Samaritan, alone recognizes that on a deep level we really are all connected – part of the same family.

Mary is, in essence, praying.  She is sitting at the feet of Jesus listening.

Martha is working.  We can assume that her intentions were good:  she wanted to be a good host to Jesus, the honored rabbi and friend of the family.

Somewhere along the way she becomes “distracted by her many tasks.”  Her distraction keeps her from perceiving the real needs of her guest.  He doesn’t require an elaborate meal; he does, however have a profound need to be listened to, and for people having taken his words to heart to begin seeing life the way he sees it.

The dichotomy that we often make between Mary and Martha is an unhelpful one, as in, some people pray and some people get things done.

We should both pray and get things done.

If we spend time praying for someone and have the capacity to help them but don’t – well, that’s not enough.

But without taking time to pray we may not perceive reality clearly.  We may not recognize what truly needs to be gotten done.  Often, we will lack the discernment of what matters and what doesn’t.   We won’t recognize that when there is a man dying at the side of the road he immediately becomes our top priority.

How would you describe the bondage under which Martha and the two “walk on by” guys suffered under?

How often do you experience yourself as being as Jesus described Martha:  “worried and distracted by many things”?

When Jesus says, “there is need of only one thing” what do you think he means by this?