Psalm 23 — Shepherds, Mothers, and the Need to Lie Down in Green Pastures 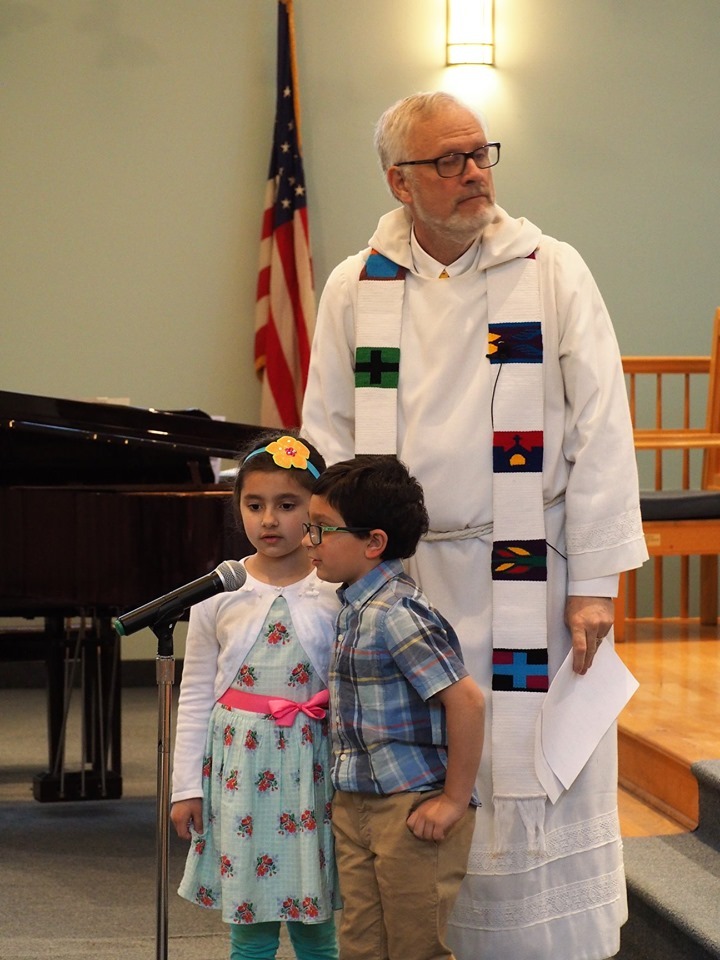 This is Good Shepherd Sunday and because Easter was late it fell on Mother’s Day, which seems appropriate since a good shepherd and a good mother have a lot in common.  Both protect and feed their lambs.  They both need to truly know those in their care – what makes them frightened, what brings them joy.  Jesus said the good shepherd will lay down his life for lambs, and a mother surely will as well.  No matter how many children a mother has, each is irreplaceable — the same with the good shepherd who leaves the 99 safely in the fold to go in search for the one lost sheep.

Last week we heard the story with which John’s Gospel ends, in which the risen Jesus has a one on one with Peter on the beach and says to him, “Feed my sheep, tend my lambs, feed by lambs.”  Peter is a stand in for all of us, and so each of us – not just mothers and fathers – are called to be good shepherds – to care for, get to truly know, and live sacrificially for the people God places in our lives.

And yet often we fall short.

There was a famous study done by the Princeton Psychology department in 1973 using seminarians as the unknowing objects of study.  On the campus of Princeton Theological Seminary, students were given an assignment in one building to quickly compose the outline of a sermon on the famous parable of the Good Samaritan, in which a stranger comes upon a man of another race beaten and robbed, half-dead at the side of the road and stops to offer aid, showing compassion, while two others of the same race as the wounded man pass on by without stopping to help.

The students were told to go across campus to another building where they were to deliver the sermon and be critiqued for it.  There were on a tight schedule, so it was emphasized they had to be on time.

The seminarians were not horrible people; indeed, without some clear capacity for compassion they most likely wouldn’t have been in seminary.  The overriding factor the psychologists found in whether or not a person would stop to come to the aid of another was the extent to which they felt rushed – stressed to get somewhere.

Carl Jung said, “Hurry isn’t of the devil.  It is the devil.”  Hurrying closes down our hearts and blocks the innate compassion – the capacity to care which is the essence of our souls.  Being in a rush is hazardous to the health of our souls.

Although there are certainly benefits to living in the 21st century, I would argue that in certain ways it has never been harder to be a mom.  There are two cultural trends to which I would point.

First, there is our “idolatry of the child”, by which I mean the compulsion we parents feel to have our whole lives revolve around the child, feeling immense pressure to give them every opportunity to develop their gifts and become a success.  This creates an overbooked schedule of structured activities, and a feeling of parental failure with the rush to provide their kid every advantage.  It isn’t good for parents, nor is it good for kids.  Everybody ends up feeling tired and anxious about their adequacy.

Those of you who are from my generation remember it was different when we were kids.  In the summertime our mothers would feed us breakfast and then send us outside to figure out ways to entertain ourselves.  There wasn’t this pressure to structure every activity to maximize potential.  We live in a more fearful environment these days and the notion of sending children out unattended to play frightens us.  But something is lost with these overbooked schedules and the constant pressure to provide oversight of our children.

The second cultural trend I would point to is the ever increasing isolation of people.  In no period of history except the present industrialized world of the present age was parenting seen as a largely solitary endeavor.  It truly does “take a village to raise a child.”  Parents pay a profound toll, and consequently, children as well.  I read an essay regarding being a mother of very young children in an “Instagram culture.”  Mothers post pictures of the times of bliss that are a part of being a mother, but they don’t post so much the not so blissful parts:  The loneliness, the exhaustion, the tedium, the depression.   The author wrote, “We are led to believe that the moment we have our children is going to be the best of our lives.  In reality it is the most overwhelming.”   Mothers are left feeling guilty for the darker feelings that arise – a feeling that there is something wrong with them for having such feelings.

From time to time we see news stories of mothers and fathers who do horrific things to their children.  The stories catch our attention; that’s why they’re posted.  We feel appalled that the sacred bonds of parents with their children could be so terribly transgressed.  And yet if we are parents, with a little self-reflection we are likely aware of quieter response within as well, one of “there but for the grace of God.”

Parents are called to be good shepherds, but routinely we fall short of the ideal.  We know the exhaustion and stress of parenting that has led us to do things we regret, and we are aware that if that fatigue and pressure were pushed to the extreme we would be capable of doing things that might put us in the newspapers.

And perhaps those of us who are not called to be parents know something of what I’m talking about in the other ways we are called to be good shepherds.

It is important to note that the good shepherd being referenced today isn’t so much the one we are called to strive to be, rather it is God.  It makes a big difference how we view God.  Is God a harsh task master like Pharaoh? Or is God a loving Good Shepherd?  Although we may say we believe in a God of love, oftentimes our behavior is more like that of somebody who feels they will be judged a failure if we don’t keep up the relentless pressure to perform oh so excellently.

God the Good Shepherd really knows us – knows us better than we know ourselves – knows what we need. Let’s consider a few of the implications of our beloved 23rd psalm.

“The Lord is my shepherd; I shall not want.”  There is a word of reassurance here addressed to parents.  God knows what we truly need, what our children truly need.  And God will provide.  We don’t have to stress so over our failures to be the idealized perfect parent.  The kid will turn out all right.  In fact, sometimes adversity – times of seemingly getting lost in the wilderness – are necessary to bring us to a deeper soulfulness.  Perfection in parenting – managing to orchestrate a childhood where all our kids’ gifts are developed and feelings of success are the norm – in the big picture this would actually end up harming the kid.

My favorite verse of the 23rd psalm has come to be this one:  “He maketh me to lie down in green pastures, he leadeth me beside still waters, he restoreth my soul.”  I am struck by the fact the good shepherd has to make us lie down in green pastures.  The implication is that left to our own devices, we would not allow ourselves the times of rest and renewal we need.  I know that’s how it is with me.  My inclination is to constantly work in some form.  I am being disobedient to my creator when I don’t take time to truly rest.

What parent hasn’t had the experience of a small child throwing a tantrum.  You tell the child, “You need a nap,” or “It’s time for bed – you’re tired.”  And the child screams, “I’m not tired!”  “Yes,” you respond, “you are tired, and since you won’t admit it, I’m making you get some rest.”

If God is not a harsh taskmaster but a Good Shepherd, then obedience to this God means embracing times of rest.  If we keep racing onward in exhaustion we become like those seminarians whose hearts close down.  We lose our souls.  God knows we need to rest to restore our souls.

I was struck by the posting this week of a mother from our church:  “My Very Understanding and Kind supervisor found someone to cover my shift tonite (so i can rest).”

The supervisor was a good shepherd.  God sees our exhaustion and calls us to lie down in green pastures; stroll besides still waters.

“Though I walk through the valley of the shadow of death.” Scholars say this would better be translated, “the deepest darkness.”  One of the implications of this verse is that times of deep darkness will come.  An old friend of mine, an extraordinary pastor and good shepherd of his flock, recently went through major surgery that laid him low.  I talked to him the other day.  He said the night before he had found himself in a really dark place – questioning whether his ministry was fraud – whether he actually had faith after all given he had found himself in such a bleak place.

But the verse implies such times will come, and though we feel alone and abandoned, we are not, and will pass through these times.  Such experiences aren’t a test that we are required to pass.  They are simply a part of the human experience.

“He preparest a table before me in the presence of my enemies…” In the present context, where certain forms of Christianity have excluded LGBTQ people from a place at the table, it is deeply comforting to realize that with God the Good Shepherd, there will always be a table to which we are welcome, no matter what those who might declare us unworthy may say.

“Surely goodness and mercy shall follow me…” Again, the scholars say this would be better translated with the word “pursue” rather than “follow.” The implication for me is again that in the face of the compulsion I feel to soldier on in a quest for goodness and mercy, assuming somehow that it’s all on me to find it, God is actually hot on my trail, like the Good Shepherd in Jesus’ parable seeking the lost sheep. Again, maybe what is required on my part is loosen up and let myself be found by the goodness and mercy that is pursuing me.

In conclusion, the most common animal metaphor in the Bible for human beings is that of sheep.  It implies we are by nature frail vulnerable — a fact to be accepted, not fought against.  It also expresses the fact that we are inherently social creatures:  a sheep all alone is a sheep who is in the process of dying.  We need community and connection – we need a flock.

But not all flocks are equal.  It makes all the difference in the world what kind of shepherd is leading the flock.  Here at the church, our shepherd is Jesus, the one who embodies goodness and mercy, who values every single human being as worthy of dying for.  With Jesus in our midst there is both overflowing grace as well as a call and a claim upon our lives to be good shepherds for one another and to the people beyond our walls longing for love.