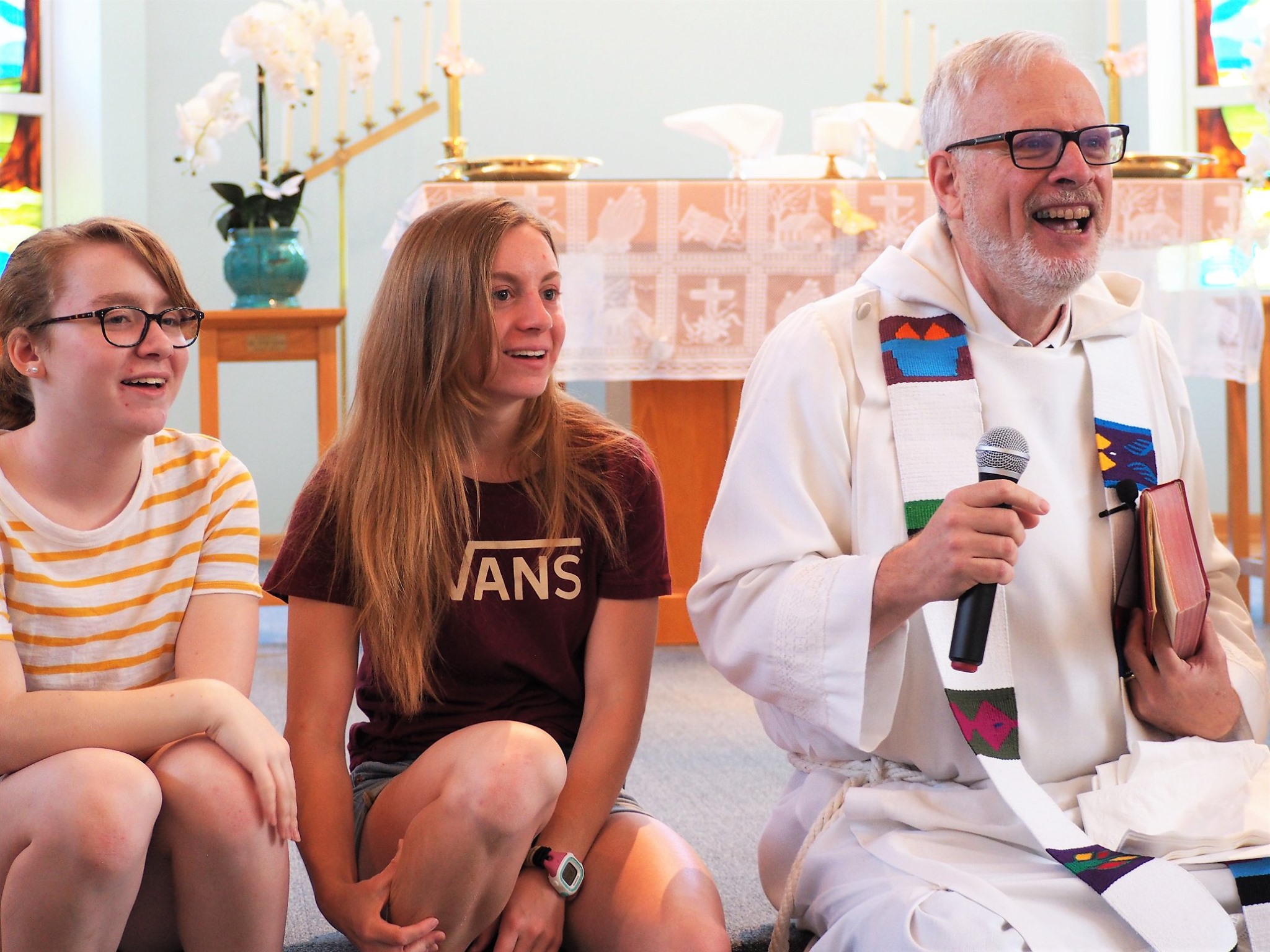 This is one of my favorite stories in the Bible.  It comes from the book of Acts, which was written by Luke the Gospel writer.  Acts tells the story of how first apostles — led by the Holy Spirit — spread the Gospel out into the world far beyond Judea.  An interesting thing happens in the sixteenth chapter.  Luke suddenly starts talking in the first person, indicating he was present for the story he tells moving forward.

Paul had received a vision by the Holy Spirit in which he saw a man from Macedonia pleading for the Apostles to come.  So Paul and Silas set sail to Macedonia, just north of Greece, and there they made their way to the lead city – Philippi – where they met some women at “the place of prayer” – the place where Jews in the city would gather to pray. These women’s hearts were open to the Gospel and they offered themselves up to be baptized, thus birthing the church in Philippi.

That’s where we pick up our story, which Bob will read for us in portions.

“One day, as we were going to the place of prayer, we met a slave girl who had a spirit of divination and brought her owners a great deal of money by fortune-telling. While she followed Paul and us, she would cry out, ‘These men are slaves of the Most High God, who proclaim to you a way of salvation.’ She kept doing this for many days. But Paul, very much annoyed, turned and said to the spirit, ‘I order you in the name of Jesus Christ to come out of her.’ And it came out that very hour.”

So this slave girl was possessed by some sort of demonic spirit that gave her the power to tell fortunes – as well as the knowledge that Paul and Silas were proclaiming truth.  From the point of view of the girl the spirit’s hold over her life not a blessing but rather a curse:  it put her in this constant, manic state of anxiety out of which she was constantly interrupting every conversation.

Empowered by the Holy Spirit, Paul casts out the demonic spirit from the slave girl, allowing her to enter into a state of rest and finally be at peace.  You would think that having set this slave girl free from such distress, people would be grateful.  But this was not the case, at least for the slave girl’s owners.

“But when her owners saw that their hope of making money was gone, they seized Paul and Silas and dragged them into the marketplace before the authorities.”

From the point of view of the owners of the slave girl, her new found inner freedom means she can no longer tell fortunes and therefore is no longer their personal cash cow.  As is so often the case, it’s all about the money.

The slave-owners are in a kind of bondage themselves – to the god of money.  It cuts them off from the natural compassion they should have for the poor girl’s suffering.  So they are stinking mad with Paul and Silas and pull the strings money affords to get the apostles arrested.

It’s similar to what got Jesus arrested and ultimately executed.  Jesus was a threat to the financial, political, religious status quo – calling into question the profits the authorities were making off the poor who were obliged to travel many miles to Jerusalem to offer sacrifices in the Temple.

Beware of the seductions of money.

“When they had brought them before the magistrates, they said, ‘These men are disturbing our city; they are Jews and are advocating customs that are not lawful for us as Romans to adopt or observe.’”

This a familiar tactic:  When a group feels threatened, appeal to tribal allegiance – stir up suspicion and even hatred towards those who aren’t a part of one’s tribe.

“The crowd joined in attacking them, and the magistrates had them stripped of their clothing and ordered them to be beaten with rods. After they had given them a severe flogging, they threw them into prison and ordered the jailer to keep them securely. Following these instructions, he put them in the innermost cell and fastened their feet in the stocks.”

Talk about a bleak situation! Paul and Silas suddenly find themselves with their bodies in some serious pain from the beatings they just took, their legs uncomfortably in stocks, and locked in the deepest darkness of the city jail.  It’s midnight, and what are Paul and Silas doing in all that bleakness?

“About midnight Paul and Silas were praying and singing hymns to God, and the prisoners were listening to them.”

Now this is an extraordinary thing!  Outwardly Paul and Silas are in bondage, but inwardly they are free.  There is every reason to think this isn’t going to turn out well, to feel sorry for themselves, to feel panicky.

But that’s not what they are about.  Unlike the people who conspired to get them locked up, they possess this inward freedom. Their trust in God is such that – as Paul says elsewhere in his letters – they know they are safe with God whether they live or whether they die.

This kind of inner freedom is uncommon, but it is what God is calling each of us to move towards.

It helps that Paul and Silas have each other, and it helps that they know there is the community of the church outside the jail praying for them.  And I think the fact that they are singing in the darkest night is no small detail.  Body and soul are connected; and singing accesses this connection, a truth of which John and Charles Wesley were well aware.  (The early Methodists did tons of singing.) As Paul and Silas sing in the darkness of the prison cell they let go into God’s tender embrace.  They experience the truth that in spite of everything, it is, indeed well with their souls.

Paul and Silas sang, and so should we, so with the help of the Allegra String Quartet, let us sing:

When peace like a river, attendeth my way,  when sorrows like sea billows roll;  Whatever my lot, thou hast taught me to say:

“Suddenly there was an earthquake, so violent that the foundations of the prison were shaken; and immediately all the doors were opened and everyone’s chains were unfastened.”

When we are able to let go – loosening the tight, anxious grip that is our standard operating system we fall back into when things are spinning out of our control — we give the Holy Spirit room to move.  Strange things – God-incidences — occur.  In this case the inner freedom of Paul and Silas is suddenly matched by an outer freedom – not just for them, but for all the prisoners in that jail as an earthquake of all things breaks them loose from their shackles.  An earthquake of grace.

“When the jailer woke up and saw the prison doors wide open, he drew his sword and was about to kill himself, since he supposed that the prisoners had escaped.”

That’s what a good Roman soldier was supposed to do when he felt as though he had failed to carry out his responsibility.  Crazy right?

“But Paul shouted in a loud voice, ‘Do not harm yourself, for we are all here.’ The jailer called for lights, and rushing in, he fell down trembling before Paul and Silas. Then he brought them outside and said, ‘Sirs, what must I do to be saved?’ They answered, ‘Believe on the Lord Jesus, and you will be saved, you and your household.’ They spoke the word of the Lord to him and to all who were in his house.  At the same hour of the night he took them and washed their wounds; then he and his entire family were baptized without delay. He brought them up into the house and set food before them; and he and his entire household rejoiced that he had become a believer in God.”

The Spirit of God moving through Paul and Silas is a great, expansive love – one that instills compassion for one’s enemies.  Paul stops the jailer from taking his own life.  Strikingly, the other prisoners do not flee – they find the phenomenon of Paul and Silas absolutely captivating.

Experiencing grace and mercy through Paul and Silas at his moment of great despair, the life of the jailer is transformed.  He goes from being the violent enforcer of the harsh, oppressive laws of the Roman Empire to being the gentle, good Samaritan who tends to the wounds Paul and Silas received from their beating. The jailer offers hospitality, inviting them to be guests in his home, introducing them to his wife and kids.

That is the place where God intends to lead us.  The jailer – or more likely his wife in this case – offered their guests – Jesus in disguise – a midnight dinner.  And the whole household is filled with joy, as the power of God’s love to warm frozen hearts and set people free is evident to all.

Do you know something of that midnight darkness?

We are about to share the same kind of midnight dinner in which Jesus is the unseen host.  That;s what Holy Communion is about. The light of God shines in the deepest darkness, and love is offered to all.  Let go your tight grip on life and trust in the Lord. An earthquake of grace is at hand.