John 21:1-13 — Surprised by Grace in the Midst of a Quarantine Funk 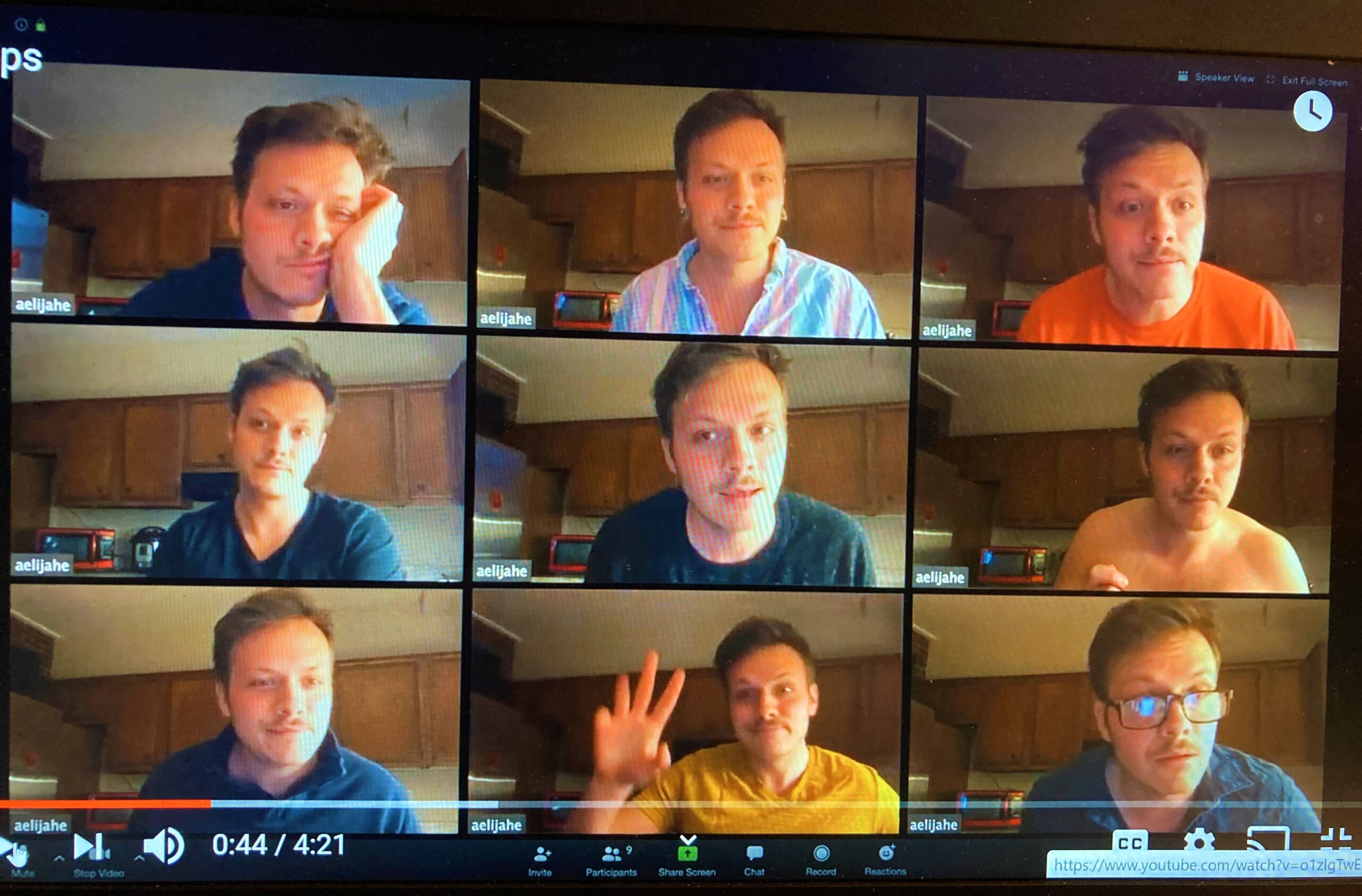 This morning we have yet another story of an appearance of Jesus after his resurrection, one that comes from 21st chapter of John’s Gospel.  There is something peculiar going on here though because if you read the end of the 20th chapter you get the clear impression that the Gospel has come to an end, and done so with a triumphant exclamation mark.  Jesus has appeared to Mary in here great grief in the garden and then to the disciples in the upper room where gives them his peace and commissions them to a ministry of releasing people from the burden of sin and guilt.  A week later Jesus appears once more to the disciples – this time with the formerly missing Thomas – and moving Thomas from doubt to faith as he proclaims Jesus to be “My Lord and my God!”  John wraps up the 20th chapter by saying essentially there are plenty of other stories he could go on to tell us about Jesus, but this should be enough to inspire us to faith.

But at some point later on John apparently decided to pick up his pen to parchment and write one more chapter.  Evidently there was some sense in which the early church was losing its way – succumbing to the temptation to despair – and John wrote to address their experience.

Listen for the word of the Lord as we pick up the story in the21st chapter beginning with the first verse:

After these things Jesus showed himself again to the disciples by the Sea of Tiberias; and he showed himself in this way. 2Gathered there together were Simon Peter, Thomas called the Twin, Nathanael of Cana in Galilee, the sons of Zebedee, and two others of his disciples. 3Simon Peter said to them, ‘I am going fishing.’ They said to him, ‘We will go with you.’ They went out and got into the boat, but that night they caught nothing.

The disciples apparently have given up on Jerusalem where last we found them and returned to Galilee where their story began – the place where Jesus first called them to leave their nets and follow him.  The resurrection has occurred, but the enthusiasm, the conviction it initially engendered seems to have gotten lost.  Only seven disciples are mentioned.  What happened to the other four?  We don’t know – they seem to have wandered off.

The seven seem to be at a loss for what to do.  You get the feeling they’re just sitting around moping – in a collective state of depression.  There’s a leadership void.  Peter is supposed to be the leader, but all he can come up with to say is, “I’m going fishing.”  The others shrug and say “we’ll come too.”

But as is often the case when we’re in the state of depression, nothing we do seems to come easily.  They spend the whole night out in their boat without catching a single fish.

Just after daybreak, Jesus stood on the beach; but the disciples did not know that it was Jesus. 5Jesus said to them, ‘Children, you have no fish, have you?’ They answered him, ‘No.’ 6He said to them, ‘Cast the net to the right side of the boat, and you will find some.’ So they cast it, and now they were not able to haul it in because there were so many fish. 7That disciple whom Jesus loved said to Peter, ‘It is the Lord!’ When Simon Peter heard that it was the Lord, he put on some clothes, for he was naked, and jumped into the lake. 8But the other disciples came in the boat, dragging the net full of fish, for they were not far from the land, only about a hundred yards* off.

I want to pause to note the humor present. First, the unrecognized Jesus calls out to these grown men “Children, you don’t have any fish, do you?”  You can imagine those tired, frustrated fishermen sheepishly admitting, “No.”

The mysterious stranger tells them to cast their net on the other side of their boat, and suddenly there net is overflowing with an abundance of fish.

Now, in those days fishermen would fish through the night naked – a reasonable thing to do because they were sure to get wet in the process and no sense getting their clothes wet, so they would set their clothes aside in a tidy bundle so they’d be dry to put back on when their work was done.

Once Peter realizes that it is Jesus calling to them on the shore, he is so excited to get to Jesus that he jumps out of the boat to swim to Jesus, but not before making himself presentable, which means quickly putting his dry clothes to cover up his privates with clothes that promptly become soaking wet.

When they had gone ashore, they saw a charcoal fire there, with fish on it, and bread. 10Jesus said to them, ‘Bring some of the fish that you have just caught.’ 11So Simon Peter went aboard and hauled the net ashore, full of large fish, a hundred and fifty-three of them; and though there were so many, the net was not torn. 12Jesus said to them, ‘Come and have breakfast.’ Now none of the disciples dared to ask him, ‘Who are you?’ because they knew it was the Lord… 13Jesus came and took the bread and gave it to them, and did the same with the fish…

Unexpectedly Jesus appears and they become unstuck. What was so hard becomes for the moment easy.  He serves them breakfast.  They had Holy Communion there on the beach.

One of the things about scripture is that it speaks to us differently in our changing contexts.  In the present context I heard this story speaking to me particularly powerfully this week.

We all respond to this pandemic each in our own way but there is a tendency I’ve noticed for many of as time passes for a lack of motivation set in.  Perhaps we find ourselves descending into depression.

Perhaps at the outset, we said to ourselves, “I’m going to take advantage of this time to get certain home projects done.” Or, “I’m going to use this time for prayer, Bible study and spiritual reflection.”  Or, “I’m going to find ways to be of service.”  But as time passes the isolation and monotony weighs on us.  We find ourselves feeling listless.  Maybe we binge watch Netflix, or find ourselves making repeated trips to the refrigerator in search of comfort food, or focusing on our next venture out to the grocery store.

Just as there was humor in John’s story, humor can help at such a time.  A couple of videos made me laugh this week.

One was a video made by a quarantined puppeteer.  He is in his kitchen, and like the naked Simon Peter in John’s story, the puppeteer is clothed only in a slice of pizza that discreetly covers his privates.  His arms move robotically up and down, which in turn move hanging slices of pizza up and down.   In a monotone, robotic voice he chants. “Anybody want a pizza slice?  Anybody want a pizza, huh?”  If you go on Youtube, you can find both a 36 second version and a ten hour looped version to watch.

The other video was created by my son Andrew involving nine separate versions of himself in a Zoom format arguing over whether they have any potato chips in the house, eventually agreeing – well, at least eight of them – to make a run to the grocery store to get some.

Both of these videos made me laugh which can be helpful in such a time as this. They both express something of this extended quarantine mood many of us find ourselves experiencing.

So this week I imagined a somewhat playful retelling of our Gospel story in the present context.

Seven Christ-followers are quarantined together during the pandemic.  They start out with good intentions regarding how they will spend their time, but as time passes they find themselves repeatedly losing their edge, getting depressed, making more and more trips to the kitchen to find something to eat.  There’s food there — rice and beans and such — but nothing looks particularly appealing.  They’re searching for comfort food.

Eventually the one they look to for leadership says, “I’m going to Shop Rite”, and the others quickly respond, “we’ll go too.”  They take their masks and gloves and pile into the car – like clowns in a clown car – and head off into the night to Shop Rite in search of comfort food..

But the trip is a failure.  They’re looking for chips, or frozen pizza, or donuts, but the shelves where such things are usually found are empty.

They try a couple of different stores and it’s the same thing.

It’s late now and they’re in the parking lot at Food Town – hungry, tired, cranky, depressed.  And some guy calls out to them from across the way.  “Children, you don’t have any donuts, do you?” Nope.  “How about pizza?” Nope.

“You looked in the wrong place,” he says.  “They moved all the food you’re looking for to the hardware section.”

The seven guys hurry back into Food Town, and sure enough right there next to the light bulbs is all the comfort food they could hope for – more than can fit into their shopping cart.

Somebody whispers, “Hey, that guy in the parking lot – do you supposed he could have been Jesus in disguise?”

The leader of the group is so excited by this idea he runs out of the store to the parking lot where he finds the mysterious stranger cooking over a grill.  Soon the others come pushing the shopping cart stuffed with comfort food, but strangely the comfort food no longer seems to matter much.

“Come, have breakfast,” says the stranger softly.  Nobody dares ask if it really is Jesus – they sense in their hearts that it is indeed their beloved savior.  They sit around in a circle on the pavement eating the food he serves them, and it is deeply satisfying – soul food, really.   It is, as Jesus once said, “the bread of life.”

On behalf of Jesus, let me say to you as we prepare to share “Holy Communion” online, “Come to breakfast.”

Those disciples long ago, they couldn’t just “snap out of it.”  They “couldn’t just gird up their loins or pick themselves up by the bootstraps.”

They needed divine grace.  That is what this meal we’re about to share is about — a wondrous love offered to us to meet the deepest hunger of our hearts.

So be easy on yourself when you find yourself descending into a funk in this time of quarantine with no end in sight.  But also be open to the possibility that the Risen Lord may show up to you unbidden to call you out of your cavern of despair, perhaps with uproariously laughter.

Allow yourselves to be surprised by grace.