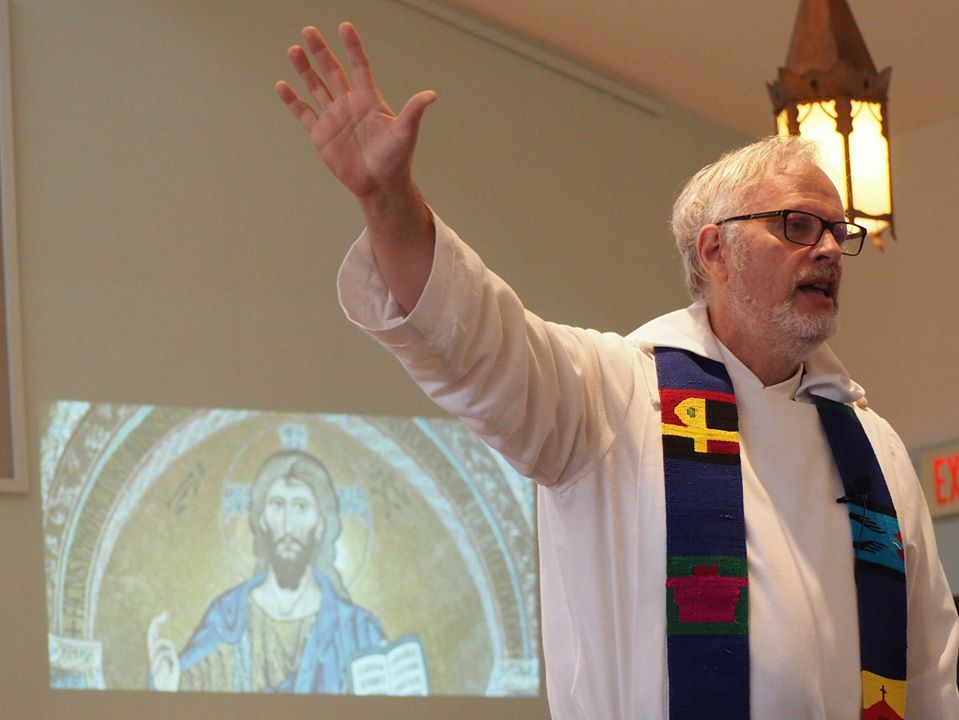 The liturgical calendar ends today with Christ the King Sunday.  Jesus, the Church declares, is the true “king.”

But there is a problem that immediately arises with calling Jesus “king” and that is our tendency to take our ideas about what a “king” is all about and project them onto Jesus, rather than to allow Jesus to redefine what true Kingship looks like.

This projection generally comes in two versions, based upon the associations that come to mind when we think of a king.

The first version takes its cues from the present day British royal family.  The king lives off in the palace in luxury, occasionally deigning to come out among the commoners to smile and wave.  The king lives in an altogether different world from ours, removed from and irrelevant to the daily struggles of us commoners.

The second version is more severe and it takes its cues for what a king is like from shows like “Game of Thrones.”  This is the king who rewards his loyal subjects but swoops down to wreak bloody vengeance upon those who dare to oppose or betray him – those he deems to be “enemies.”

The reading we just heard from the Gospel portrays a king who could not be more different from both of these versions regarding what a king is.

This king does not live in an altogether different world from the one with which we find ourselves struggling.  This king chooses to be in the very thick of life with all its hardship and pain, ultimately dying a painful death on a cross between two very flawed human beings.

And this king isn’t plotting vengeance upon his enemies.  This king commanded us to love our enemies and shows us what this love looks like in its most extreme form as nailed dying on a cross he speaks these utterly astonishing words to all those who have conspired to kill him:  “Father, forgive them for they know not what they do.”

The kingship of Jesus is that of a servant king willing to suffer and sacrifice himself on behalf of all his subjects.

But that second version of king has always been deeply embedded into our culture and it has led to terrible distortions of who Jesus is.

Its most gruesome distortion provided the motivation for the crusades where supposedly “Christian” soldiers with crosses emblazoned on their shields marched to the “Holy Land” for the specific purpose of slaughtering Muslims and forcibly making Jerusalem “Christian” territory.

It has also provided the basis for a similarly vile misrepresentation of Jesus in which “Christians” believe that God loves only Christians and hates all others — so much so that it imagines a very sadistic God intent on casting all non-believers into the fires of hell for all eternity.

It allows Christians to believe that the Christ who came two thousand years ago — the one who out of his great love chose to allow himself to be humiliated and nailed to a cross rather than to resort to violence – to give way to the Christ to come who knows how to behave like a “real” king, swooping down to wreak the vengeance he was unwilling to unleash the first time around.

And even if we don’t describe to such sadistic theologies, I would suggest that to some extent this same version of how a real king behaves lives inside all of us in our tendency to divide people into two categories – the loyal subjects and the disloyal subjects – with the believe that some people are more worthy of both God’s and our love than others.

No, Jesus is an altogether different kind of king — one who loves all equally.

Having said this, it is important to note that in the Gospel reading we just heard we are presented with one clear dichotomy of two persons.

Jesus dies between two thieves.  One mocks Jesus.  The other stands up for Jesus, and declares his innocence.

A clear distinction is depicted here, but it is important to take note of where the distinction lies.

The two men are not different in terms of the lives they have lived.  They are both identified as “thieves”, the implication being they have both lived lives they shouldn’t have, lives of thievery.  Neither is “innocent.”  In the word used by Jesus to describe the behavior of the prodigal son in his famous parable they have both “squandered” their lives.

And neither of them is going to come down from the cross alive.

The difference between the two thieves lies in their response to the truth they face as they come to the end of their lives.

The thief who mocks Jesus with his dying breaths has hardened his heart to the bitter end of his life, finishing the journey of life cynically and self-absorbed.

In contrast, the other has been broken open by life.  His suffering has become a bridge of compassion that connects him to the sufferings of others.  And in this great breaking open of his life – in his great humbling – something has awoken with him – the belief that although there is no hope to be found in himself there is a hope that is mysteriously revealed in the innocent man dying beside him – an awakened trust that the one who gave him life will not abandon him as his life on earth comes to an end.

It is that same humility of which I speak when I extend the invitation to received the sacrament of Holy Communion – the sole requirement.

Here is the major point I’d like to make this morning.  You and I – we are these thieves dying on the cross beside Jesus.  Though we do our best to avoid the fact of our mortality, our days are numbered.  Nobody gets out of here alive.

This is a truth that makes life all the more precious, and in avoiding this truth we squander the gift of life God has given us.  When we are pre-occupied by the daily grind of life we don’t recognize we are squandering the gift.  From our nose-to-the-grindstone point of view we’re simply doing our best to meet our responsibilities.  But the truth is we spend a great deal of our life asleep at the wheel.

There are moments, however when we awaken and our perpetual squandering is revealed to us.

I spoke of such an awakening last week when I talked about the experience of parents holding their newborn child.  A sense of miracle and wonder arises within and an overwhelming love and gratitude that can be painful and frightening because with it comes an awareness of the fragility of life.

At Fred’s group this past week I shared an experience from my family’s trip to Ireland last month.  It was a very special time not only because of the opportunity it afforded us to explore this beautiful and mysterious land we’d never visited before, but also because we could do it together as a family.  It is very rare these days for Sarah and me to be together with all three of our adult children.  Andrew lives in Maine, and now Bobby in Northern Ireland.

The particular experience I am referring to happened twice on the trip and both times involved saying goodbye.  The first was eight days into the trip when we drove Andrew to the airport because he had to leave early to get back to his job, and the second was at the end when Kate, Sarah and I left Bobby to return to New Jersey.  With both of these partings, the intensity of my love for my family arose within me and I was moved to tears with a strange mixture of intense gratitude and sorrow.  The sorrow was connected to the awareness of the passage of time.  It involved an awareness of how much blessing I’ve taken for granted and the recognition that there were things I could have done better as a parent.  But mostly it had to do with the awareness that there is no guarantee we’ll have such times again, and even although hopefully we will, before too much more passes we will reach the end of such times together here on earth.  It was quite painful, but the experience also included an intense sense of how blessed I have been to be given an opportunity to share such love.  Because, I saw clearly, love was all that ultimately matters in life.  Love is why we’re here.

The feeling I had was one of being awoken to a truth that most of the time I push aside because it is just too overwhelming to bear the full force of this truth – but a truth nonetheless that I don’t want to stray too far from – because to do so is lose track of what really matters in the end.

So I was struck this week that those two thieves dying beside Jesus express to contrasting responses to this great truth:  one somehow allows himself to be awoken to this truth, and the other unconsciously chooses to sleep on, because I suspect it would be just too painful to awaken.

We are left with the question:  with which of the two thieves will we identify?

There is what I hear is a wonderful new movie out this weekend about Fred Rogers played by America’s favorite actor and all around nice guy, Tom Hanks.  I read a review of the movie.  The movie is based upon a friendship that grew between Mr. Rogers and a journalist after he was given the assignment of writing a piece about the children’s television icon.   The journalist had developed a pretty jaded, cynical worldview.  He had estranged relationships with his father and son.  His friendship with Fred Rogers changed his life.  He described an experience of having Fred pray for him.  He said that as he did his “heart felt like a spike, and then, in that room, it opened like an umbrella.”  Such a beautiful description of a heart broken open by the grace of God – in this case, through his encounter with the graciousness of Fred Rogers.  The experience permanently altered the way he saw the world.

This, I believe is why we come to worship each Sunday.  Together our hearts are broken open, and we wake up a bit from our slumber and remember what matters, and we leave this place a little less inclined to squander the precious gift that is life.