The Choice to Love 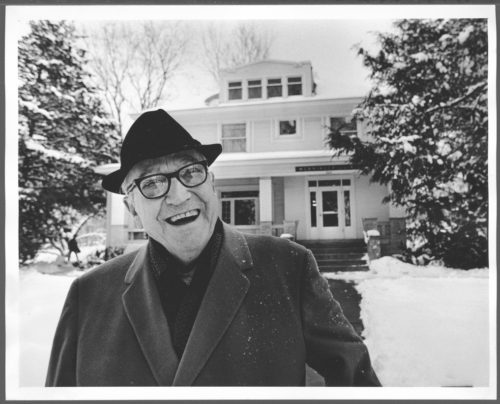 Among the twelve original apostles, John alone is believed to have lived into old age, most likely in the city of Ephesus in Asia Minor. In his later years not only his body but also his mind became somewhat enfeebled. The aging evangelist John was eventually pared down to just a few words.

In case you missed it, the word “love” occurred nine times in the short passage Bob read for us. In John’s Gospel, four entire chapters (13-17) are devoted to what we commonly think of as “the last supper”, though in John’s case, there is no “supper”. Jesus spends the time teaching his disciples as he prepares to leave them through death, and the teaching begins with his washing of the disciples’ dirty feet. In the course of these four chapters Jesus speaks the word “love” 22 times, beginning with the very first instance being, “This is how people will know you are my disciples: that you love one another.” It is striking that followers of Jesus will not be known primarily by what they believe, important as that may be. No, followers of Jesus will be known as a people who do a lot of loving, and the operative word here is “do.” Although love can include what we think of as “loving feelings”, primarily love is something we do.

We are all familiar with the golden rule, “Love your neighbor as yourself.” But notice the way Jesus re-phrased it in our passage: “Love one another as I have loved you.” The reference point is changed from our love of ourselves to the way Jesus loves us. This is significant because the truth of the matter is that we aren’t always very good about loving ourselves. At times we can be pretty abusive of ourselves, having internalized a voice of self-condemnation that we would be horrified to hear somebody else use on another person. At other times we can be too soft on ourselves, allowing ourselves to be less than we are capable of being – less than who God made us to be.

So we are to take our cues about what it means to love by paying attention to the ways Jesus loved, whose ultimate expression of love was his willingness to lay his life down for us. Before he reached the point of dying for us, his love was expressed in a variety of ways. There was the simple, tender act of washing his disciples’ feet. There was his willingness to engage individuals deeply, listening intently to them and speaking words they needed to hear leaving them both valued and transformed, especially his willingness to do this with people who others viewed as outcastes.

Sometimes, however his love was expressed in harsh ways – when he rebuked his disciples or the religious authorities in regard to hard truths they were avoiding facing. When there was a crippling darkness that needed to be brought out into the light.

So to review, when Jesus speaks of love he is speaking primarily of making the choice to act in a way that expresses love in its various forms. Sometimes the choice of love is relatively easy; in particular when loving feelings are present, as in lending a helping hand to someone we are deeply fond of. At other times loving feelings may not be particularly present, but a loving act can require so little of us – for instance, saying a word of appreciation – that you wonder why we don’t do so more often.

At other times choosing to love can be hard. It isn’t easy to speak an uncomfortable truth to someone we are fond of, let alone intimidated by. It isn’t easy to act lovingly when we are exhausted and love requires more energy from us. And it is particularly difficult to act lovingly when the person whom we are called to love has acted unlovingly towards us – the “enemy”, the betrayer.

The only way to move towards being able to make this choice for love consistently is, as Jesus says, to “abide in his love,” which means I think two things: 1) Consciously opening up our hearts to the loving grace of God revealed in Jesus through prayer; 2) Binding ourselves deeply to Jesus’ body – to a church where love is lived out.

Our natural inclination is to absorb the spirit of the people whose company we keep. In the midst of loving people, we become more loving. In the midst of a group of people where love is scarce, we find ourselves less inclined to make the choice of love.

I’ve been reading about the great American Psychiatrist, Karl Menninger. He grew up in the heartland of Kansas in the beginning of the 20th century and was a part of the generation of psychiatrists that came immediately after Freud. “Love” wasn’t a word Freud used when he talked about the process through which healing took place for people suffering from mental illness. In psychoanalysis healing was dependent on the skill of the doctor to identify unconscious internal conflicts that were sabotaging the life of the patient, and bring them to consciousness. In doing so, often symptoms would diminish.

In contrast, Menninger didn’t shy away from talking about love. “Love cures people,” Menninger said, “both the ones who give it and the ones who receive it.” He started the famous Menninger Clinic for psychiatric inpatients in Topeka, Kansas. Over time he came to the conclusion that the patients they were treating suffered at the core from a lack of love: they hadn’t received enough love, and in turn they hadn’t discovered their own capacity for love.

At one point he called staff together and told them that their patients could only be cured by love — professional attention, without love, wouldn’t do it. The whole institution was to be organized around love — all contacts with patients, from the top psychiatrists right down to the custodial staff, were to be interactions that expressed love. It was to be, as he said, “love unlimited.”

Six months later they took stock to see how things were going and found that the expected hospitalization time had been cut in half. Menninger recognized that healing of psychic wounds naturally takes place when a person is immersed in a loving community, one that helps the person discover their creativity – or as Jesus alluded to in our reading, their capacity to bear fruit. It is in doing so that one awakens to joy.

Late in his life Menninger wrote a book with a controversial title, “What ever happened to sin?” His point was that not to introduce blame and punishment to the treatment of psychological disorders, in fact throughout his life he spoke out about the failure of our criminal justice system – that people are inclined to come out of prison more unloving than they were when they went in. Rather, his point was that something is lost when the moral dimension of our lives isn’t acknowledged in the treatment of mental illness — that it is important for all of us to recognize the call and claim of love upon our lives and the measure of freedom – limited though it is – to choose love.

The nature of love is that its presence is often overlooked, but when we begin to look for it, we find it in places we perhaps didn’t expect. And once we begin noticing the presence of love, we naturally find ourselves choosing to love more frequently.

So this brings me to the colored index card in your bulletin. Outside in the hallway there is a bulletin board with an unfinished sentence. “I witnessed love at our church when…” I want you to write a few words to finish the sentence. The sentence can be finished in an endless variety of ways, such as “when somebody welcomed me warmly when I first came to worship…” “when somebody called me to encourage me when I was going through a rough time…” “when I saw people cooking a meal for the homeless…”

My one request is that you don’t put any names on the card – either your own or the name of anybody else. The focus of this isn’t to be giving people “credit;” we don’t want to create a competition regarding whose name appears on the board most often. The point of this is simply to remind ourselves of all the different ways love is present within the life of our congregation, with the hope that in doing so, we will be inspired all the more to choose to love. Fill out a card and leave it in the basket and I’ll staple it to the board. As the weeks pass I hope to run out of room as we marvel together at the wondrous explosion of color that comes to cover our bulletin board.[/vc_column_text][/vc_column][/vc_row]