The Eulogy for Ruth Faulend 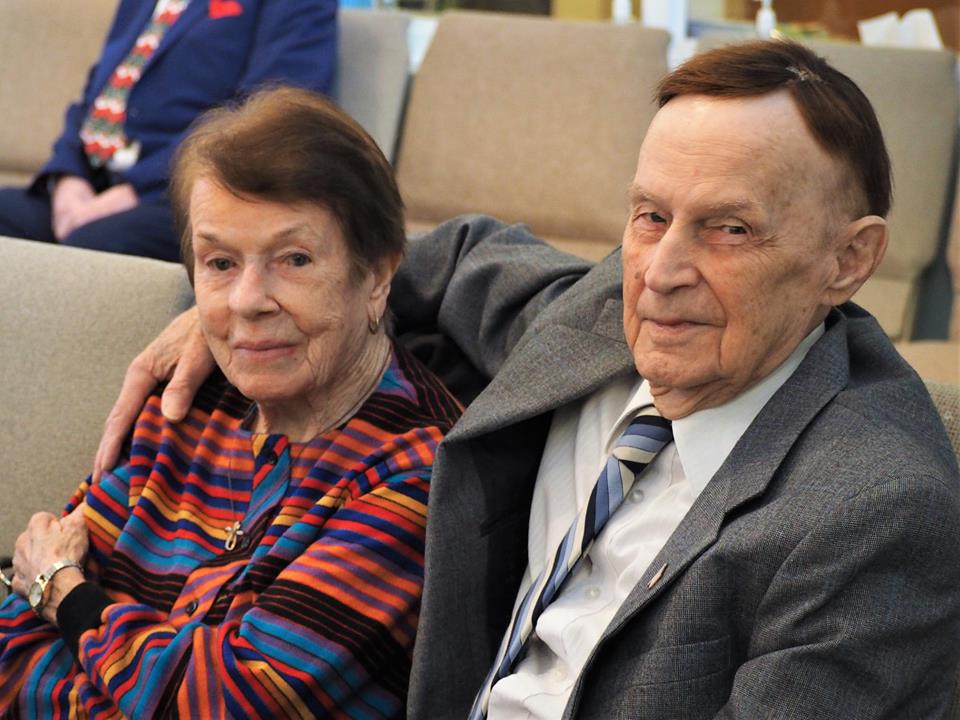 Sometimes it is more the quality of a person’s presence, rather than the things they do that has the greatest impact.  This was the case with Ruth in the life of our church.   Her loving, gentle, faithful presence quietly impacted our church in subtle but deeply beautiful ways.

For fifty years one of those things we could count on when we came to worship on Sunday mornings was that we would find Ruth and Charles sitting in their same seats in the back left hand row.  Together they radiated such warmth and devotion – to God, to their church family, and to one another.  Their marriage lasted 68 years on this earth.  In an age when marriages so often fall apart under the stresses of modern living, the presence of Ruth and Charles in our midst was a beautiful testimony to the fact that it is possible for two people to persevere in love for one another down through the decades – that two people could still take such delight in one another after all these years.   One of the things that stands out the most for me regarding Ruth and Charles was how readily and easily they laughed together.

It was also a testament to Ruth and Charles’ marriage as well as to their parenting just how devoted their children Sandy and Chuck have always been to them.  Living close at hand, Sandy and her husband Bob were ever so faithful with their frequent visits.  Sandy — a nurse – was always attentive to her mother’s health, and Bob with his culinary talents so generous in stocking Ruth’s refrigerator with delicious meals to warm up and eat.  From further away, Chuck and his wife Julie stayed closely connected with Ruth and Charles, and when Ruth’s health declined they steadfastly insisted that Ruth and Charles come and live with them to help lighten the weight of responsibilities that fell to Charles in his bride’s day to day care.  And so Ruth spent the las seven months of her life living in their home.

How proud both Ruth and Charles were whenever they spoke of their children, as well as of Chuck and Julie’s children, Kelly and Kristopher.   Kelly attended college just an hour away, and in recent years would often come to spend a weekend with her grandparents, and come to church with them as well.  This too spoke volumes about Ruth and Charles – that a young woman in her early twenties could take such obvious pleasure in the company of her ninety-something grandparents.   We took delight in the sight of the three of them sitting together.

We have in our church an unusually long “passing of the peace” and Ruth seemed to truly relish in it.  She would wander about, conveying such love and delight to each person she encountered, her sparkling eyes looking us straight in our eyes as she clasped both our hands and gave us each a kiss.

When I got the news of Ruth’s passing on Monday I invited people from our congregation to email me with their memories and thoughts of Ruth, and in spite of the fact that we’ve been struggling with a power outage and limited access to the internet since the hurricane passed through Tuesday I got over twenty responses.

There were several reoccurring themes in what people wrote.  Kindness, gentleness and love were words used often for Ruth, as well as the heart-warming impression Ruth and Charles made together as a couple.

One woman who grew up in our church years ago wrote the following:  “Ruth and Charles were such a lovely couple and their love and dedication to one another was such an outstanding model and inspiration for us all.” (Nancy)

Another woman put it this way: “Ruth and Charles were a quiet, soft spoken couple who made a big impression in our church.  They provided a positive and comforting role model, always sitting in the same spot each week.  They were a testament to strong faithfulness in God as a united pair together.”  (Arlene)

Another wrote, “Ruth was a kind and special lady – a lovely human being.  Ruth and Charles together were such a kind and gentle couple.”  (Carolyn)

Two more themes repeated in the responses were the warm welcome offered by Ruth, as well as her attentiveness to children.

One woman wrote, “Ruth with her gentle smile is one of the people I remember most clearly from the first Sunday we attended PUMC 26 years ago.  Her welcome that Sunday was so warm and that same warmth was there every time I encountered her over the ensuing years.  She was as interested in greeting our seven year old son Anthony as she was in greeting my husband and me.  Her interest in Anthony was unwavering as she always asked about him.  Through difficult times I found comfort in her assurance she would pray for him.”  (Donna)

One young mother wrote, “Ruth was always so lovely, especially with my young son Matthew.  She will be missed.” (Michele)

A man wrote, “Ruth always sought me out during the passing of the peace.  I always appreciated that.” (Tim)

Ruth’s loving presence during the passing of the peace was mentioned frequently.

One woman wrote, “Ruth was always so kind and loving to me.  Her voice was soft and sweet.  I loved leaning down to hug her during the passing of the peace.  Ruth, we will miss you and look forward to that day when we will meet again in heaven.”  (Maidie)

Another woman mentioned how much it touched her when Kelly would accompany her grandparents    “I loved it when their granddaughter would come to church with them.  She so clearly loved her grandparents.” (Anna)

A couple of people also referred to Ruth’s classic sense of style and beauty.

Everybody said they were holding Charles in their prayers.

The Apostle Paul reminds us in 1Corinthians 13 that no matter what we accomplish in this world, if we have not love, in the final measure we are “nothing”.  Ruth was something – that’s for sure.  She radiated love.  Now we see in a mirror dimly said Paul.  Now Ruth sees face to face the very source of all love.  She shines like the sun.