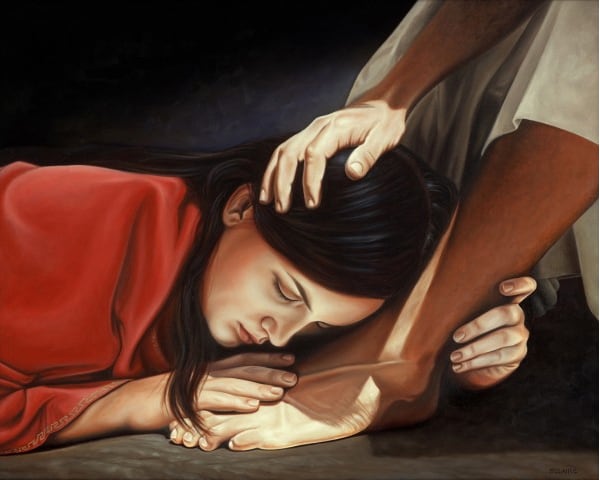 A sermon preached on April 3rd, 2022 bases upon John 12:1-8 entitled, “The Fragrance of Grace: Jesus in Hospice Care”

As most of you know, I frequently take walks in Old Troy Park.  Sometimes I listen to podcasts as I walk. One of my favorites is “This American Life.”  Each week the producers pick a theme and tell stories in relation to that theme.

This past week I listened on my walk to their most recent podcast – one dealing with the challenging theme of dying.  The woman narrating this week’s theme began by telling the story of helping her mother care for her beloved stepfather in the last weeks of his life — describing how hard it was to accompany him as he went through the slow process of dying.  After telling her story, she interviewed a Hospice nurse, shadowing her as she attended to the patients at their Hospice facility. She talked to some of those who were dying, but mostly she talked to their family members.   The sense of helplessness they felt was a major theme – the times when they didn’t know what to do to make their loved ones comfortable – the times when they didn’t know what to say.

The podcast was a re-run from about five years ago.  As I listened, I realized I had heard the original broadcast because there were a couple of details I remembered. When I first listened I managed to do so with some degree of clinical detachment – it held my interest as a pastor who at times is called to minister to people in Hospice settings – it’s something with which I have some familiarity.

As I listened this time though I couldn’t manage the same sort of clinical detachment – I found myself responding on a very personal and emotional way.  It’s wasn’t hard for me to figure out why.

There are only a couple of certainties in the course of life that are unavoidable.  If you’ve been working your whole adult life there is the certainty that one day you will retire – a pretty big deal.  For a long time this inevitable event was for me far off in the future – an abstraction — but now it’s just a couple of months away.

Retiring is a big deal, and I’m aware that once I move through this big deal the next big unavoidable certainty will be my own death.  Perhaps this sounds morbid, but hey – it’s Lent.  The season invites us to consider such things.

As I listened to the podcast I thought about the fact that unless death comes to me in some form suddenly and unexpectedly – I will one day be that dying person whose loved ones will be struggling with feeling helplessness in how to care for me.   For the first time in my life, I imagined older versions of my children Andrew, Kate and Bobby at my bedside looking pained.

So, it really struck home.

When I listened to the podcast I had already spent some time with the Gospel I just read to you, and I hadn’t really caught hold of a way in to the passage.   Afterwards,  I couldn’t help but see the scene describe as essentially a kind of Hospice.

Jesus is at a dinner party at the home of a family that is described in John’s Gospel as being among his very closest friends.  The family consisted of two sisters — Mary and Martha — and their brother Lazarus who just a little bit earlier in the story Jesus had called out of the tomb where his dead body lay for three days.

Their home is in Bethany, just outside of Jerusalem —  the place where in a matter of just six day Jesus will die on a cross.  It’s a safe bet that the mood at that dinner party was one of great heaviness.  A few days earlier the disciples had been greatly alarmed when Jesus announced his decision to travel to Bethany in response Mary and Martha’s request that he come because  Lazarus was dying.  The disciples knew that the religious authorities were determined to kill Jesus because they saw him as a threat to their authority.  Thomas had said in effect that they were going to Bethany to accompany Jesus in his inevitable death.

So, everybody at that dinner party has some awareness of Jesus’ impending death, though probably as is usually the case there was probably some denial going on.  Nobody’s talking about it directly.

Martha – the older sister – is expressing love the best way she knows how, which is by focusing her attention on serving up dinner.  It’s a lovely thing she’s doing.  If you are trying to express love to someone who is dying, oftentimes love is best conveyed by doing very concrete, practical things like preparing a dinner the person might enjoy.

Mary is quite a different person from her sister – less practical, more intuitive.

At some point in the past Mary had been moved to purchase a rather outrageous amount – a full pound – of very expensive, very fragrant perfume.

What was Mary thinking when she bought it?  It certainly wasn’t a very practical expenditure of money.  We don’t know why she bought it, and I suspect she didn’t know either.  Through some Holy Spirit-inspired intuition she simply knew that at some point in the future the perfume would serve some holy purpose.

And now at that dinner party with grief heavy in the air Mary feels an inner nudge that lets her know the time for which she purchased the perfume has come.  She gets the jar of perfume from its hiding place and brings it to Jesus.  Weeping, Mary breaks it open and proceeds to pour the perfume over Jesus’ feet, bathing them with a mixture of perfume and tears, wiping them with her hair.  The fragrance of the perfume fills the whole house.  It’s an outrageous thing to do, but it’s what Mary feels she must do to express her great love for this man who will soon be taken from her by death – and clearly Jesus is deeply moved by what Mary has done.

In Matthew’s version of this story, it is the disciples collectively who question what Mary has done – how impractical it is – how the perfume could have been sold and the money given to the poor.  The Gospel writer John has Judas speak the words, and seems compelled to present Judas as a cardboard villain – this consistently bad guy – telling us Judas never really cared about the poor and that in fact in his role as church treasurer was routinely stealing money.

I tend to believe Judas was a much more complex figure than John makes him out to be.  The question Judas asks regarding Mary’s apparent waste of resources that could have been used to help the poor is a legitimate one – at least under ordinary circumstances.

But this isn’t an ordinary circumstance.  When a loved one is in Hospice, sometimes the practical thing isn’t necessarily the right thing to do.

I’m inclined to see Judas as having a blockage to his heart that keeps him from being present to this hospice moment.

So, what are we to take from this story?

Don’t rush through life as though we have forever, because we don’t.  What we have is the present.

And another – don’t wait to find ways to express love to the people in our lives.  Do practical things, like cook them meals.  But sometimes impractical things, too – like give them an unexpected bouquet of flowers.

And make sure you get to say what needs to be said before it’s too late.

Hospice chaplains talk about how when someone is dying there are some very basic things that need to be said from both sides — by those who are dying, and by those who will remain behind here on earth.

A couple of them are real no brainers:  “I love you.”  “Thank you for having been in my life.”

Since we inevitably hurt those we love in the course of life some of the things that may need to be said can be more challenging:  “I forgive you.”  “Please forgive me.”

And at some point, the one who is dying needs to be given permission to take their leave – a blessing if you will.  Some tears will probably need to be shed to reach the point where we are ready to let go of someone we love.  In a certain way this is what Mary was doing for Jesus:  she was anointing his body for burial.  Mary was telling Jesus she loved him, embracing her grief, but she is also letting him go — preparing him for the journey ahead.

In the midst of the grief present at that dinner party lovingly hosted by Martha there was a great hope – a hope expressed by the beautiful fragrance that Martha’s broken jar of perfume unleashed.  A chapter earlier, a grief-stricken Martha had lamented to Jesus the fact that her brother Lazarus’ decaying body – three days in the tomb – would give off the terrible stench of death.

Here now the terrible stench of death is replaced by sweet fragrance of grace.  Death is defeated.

In a few minutes we too will share a dinner party with Jesus gathering in our imagination in that upper room Jesus shared with his disciples the night before Jesus died.    As he gives us his body and blood, he tells us he forgives us all our sin, our great regrets.  The fragrance of God’s great grace is present.  You don’t have to be held captive to your past.

Perhaps as you receive the bread and the cup you will also be reminded of the people in your life to whom there are words you need to say in word and deed:  “I love you.  Thank you for being in my life.  I forgive you.  Please forgive me.”