The Humanity and Compassion of Jesus and Our Interconnecting Needs 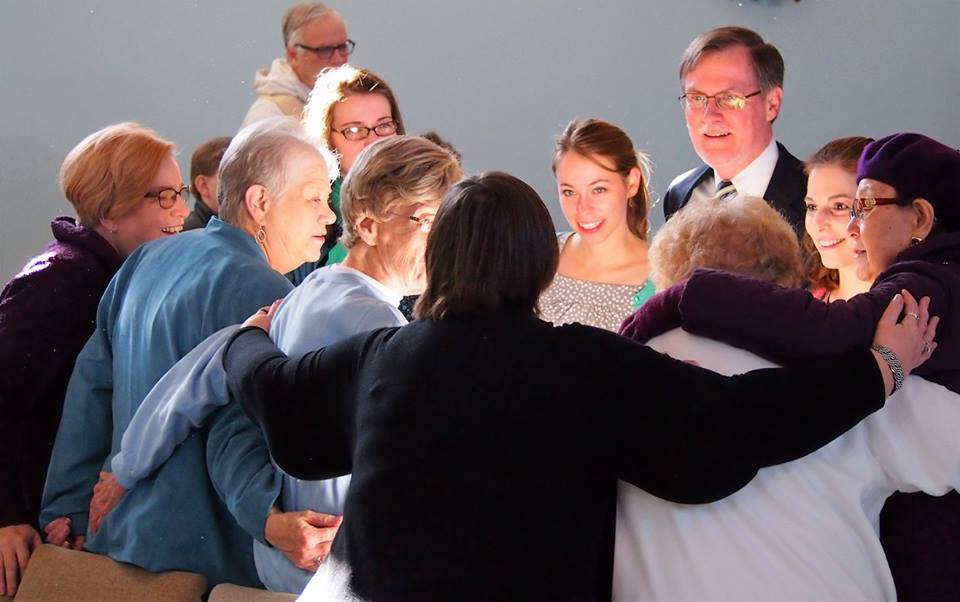 In spite of the extraordinary power of God on display at work in Jesus in this passage, it is for me the humanity of Jesus that comes through most clearly.

Just like the rest of us, Jesus inhabits a body that gets tired and hungry.  He feels grief just like we do, in this case over the murder of his cousin John the Baptist at the hands of King Herod, and heartache over injustice.  And just like us he is capable of emotional and spiritual exhaustion.

The constant demand of the crowds for his attention and aid is draining for him.

Jesus is a human just like we are humans which means he has to deal with the inherent brokenness and messiness of life, which includes the fact that sometimes our personal needs for rest and renewal conflict with the needs of others, and there is no easy way to resolve this.  In our story this morning Jesus sets out to lead his disciples away to a solitary place for a time of rest, but their retreat is interrupted by the pressing needs of the crowd that follows.

Discerning how to meet those competing needs is a struggle for us and it’s a struggle for Jesus and we see this struggle come to a head in the next chapter when Jesus tries yet again to get away for some rest, this time leaving Jewish territory to withdraw into Gentile territory where he hopes to remain anonymous, but still a woman with a very sick daughter finds him and desperately begs him to heal her daughter. His initial response is the sort that often arises out of exhaustion: he speaks to her in a cruel manner referring to her and her kind as “dogs”.  She perseveres however and in the end Jesus’ heart is opened by her need and her faith, and Jesus himself receives new insight into just how deep and wide is the love of God, encompassing Gentiles as wells as Jews.

And this too is a sign of the humanity he shares with us:  in this confusing world Jesus makes mistakes and learns and grows from his mistakes.

So one lesson from our passage is simply that when we find ourselves struggling we can take comfort in knowing that oftentimes life was a struggle for Jesus as well.  Life isn’t easy, and perhaps the notion that it should be easy simply makes things worse.

One of the things that strikes me about this passage are the range of needs that Jesus addresses.  In the part of the story that is skipped over, Jesus addresses the basic bodily need of hunger.  He feeds poor, hungry people.

It can be hard to care about anything else when your belly is empty and there is little to hope for in regard to ending your hunger.  Hence, throughout history the church has been concerned with feeding the hungry.

I would argue that in the story of the feeding of the five thousand Jesus is also addressing the interpersonal needs of human beings – our profound need for a sense of belonging in a loving community.  His vulnerable sharing leads others to follow suit, and in doing so he gives the people a glimpse of the Kingdom of God in which all are welcome and cared for, where people share with one another.

And then at the end of our reading Jesus devotes himself to healing people of their sickness.  He knows that when your body feels miserable it is hard to focus on anything but your bodily affliction.

The healing ministry of Jesus makes one simple but easily overlooked point very clear.  God does not give sickness to people as punishment for sin, although that was a common belief in Jesus’ day, and still common today.  Jesus is God’s agent on earth, revealing God’s will, and there is not a single instance in the Gospels in which somebody comes to Jesus seeking healing for a physical affliction and he turns them away telling them that they have brought this sickness upon themselves as an expression of God’s wrath. We can ask why a God of love allows sickness, and that opens up a whole different conversation that probably won’t be fully settled.  But the one thing the story makes clear is that when we or a loved one gets sick, it’s not about God punishing us.

Returning to the beginning of our reading, it is striking that Jesus’ initial response to the crowd of people on the shore is not to address their physical needs. For the first few hours there is no mention of him either healing or feeding people.

Rather we are told two things about his initial response:

We aren’t told specifically what Jesus taught them, but I suspect that message went beyond words in their experience of him as someone – in particular a representative of God – who chose to turn towards them, rather than away — his willingness to feel their pain with them.

With all forms of pain, the worst expression is pain that is experienced alone, with a sense of abandonment.  We have all had experiences in times of our personal pain of the profound difference it makes to simply have someone draw near to us in a way that conveys that they truly understand our struggle, feel our pain, even if there is nothing they can do to fix the problems that cause our pain.

So Jesus’ decision to turn towards them in compassion, rather than to turn away is itself a profoundly moving message in and of itself.

Beyond the simple tangible expression of compassion I suspect that Jesus talked to them about the kingdom of God that was breaking into this world in his ministry – this world so dominated by the kingdoms ruled by the Herods and Caesars of this world.  He talked to them about how they were all precious to God, how in contrast to the messages they received from Herod’s world they truly do matter, they truly do belong.  They are God’s beloved.  And that they are here for a purpose – that there is a high calling upon their life that comes from their creator.

Remember that first temptation of the devil in the wilderness?

To turn stones to bread.  Jesus quotes scripture:  “Man does not live by bread alone,” as important as bread is,  “but by every word that comes from the mouth of God.”

Jesus is feeding their hunger for God’s word.

And so in this story we see the interconnected needs we human beings have:  bodily needs for food and health, interpersonal needs for belonging and community, and spiritual needs for a connection with God and a deeper meaning and purpose to our lives.

In certain parts of the world it is the physical needs of humans that are the most pressing – places where starvation and disease are pervasive in a way we in our comfortable suburban experience can’t begin to imagine.

But sometimes in the midst of poverty you can find people with far richer spiritual lives than we typically know.  People who are deeply connected to their neighbors in communities where they share the little they have.  People who know routinely reach out to God.  Perhaps this is what Jesus was getting at when he said, “Blessed are the poor.”

In our declaration of independence we are guaranteed the right “to pursue happiness,” and yet for the most part the sort of state that we envision when we think of “happiness” is not one that Jesus ever knew.  We think of happiness as being something we can pursue by being intentional about our health, by accumulating wealth, by distancing ourselves from pain and conflict.  It is the vision of happiness that the advertisements for the lottery cast before us.  Oh, to be lying around in luxury and comfort far removed from the suffering of others.

But Jesus doesn’t show us that.  He was never rich.

He lived as our story tells us with compassion, and compassion means literally feeling the pain of others in your guts.  He lived with a lot of conflict that arose from being faithful to the will of God in a world that actively resists God’s will.

In the end for Jesus being faithful to God meant sacrificing his body’s health to the whips and nails of those who were intent on killing him.

The happiness we are encouraged to pursue is a spiritually empty one.

The world encourages us to set our sights on being rich in things, but in doing so we find ourselves poor in terms of love and a deeply connected community life.

In our society we see an epidemic of loneliness and despair.

It is quite possible that in a very real sense that a person can grasp a better glimpse of what true wholeness is about in the midst of dealing with a life-threatening illness than many a hard driving person who goes to the gym five times a week, is told by their doctor they have excellent health.

I read about a new documentary that has just been released entitled “Generation Wealth.”  The filmmaker, a woman named Lauren Greenfield has spent a quarter-century traveling the world to chronicle excessive consumerism in all its forms and the elusive pursuit of happiness.

By her telling she see’s our society moving from one that valued frugality, hard work and discretion to one that values of materialism, celebrity and narcissism.

The article I read described the documentary as being “a cautionary tale about a culture she contends is heading off a cliff, the film covers child beauty pageants, eating disorders, the sex industry, drug abuse and rich kids indulged by their spoilt parents.”

The problem isn’t just with the rich, but rather the fact that the poor take their cues for the good life from the rich and famous.  A young man is heard in the documentary who says,

She talks about an addiction to wealth.  Like any other addict, when people are addicted to wealth, no amount of money is enough money – they always need more.

Jesus told a story about a farmer whose fields produced an abundance of wheat.  He reaches a point in which his barns are filled – he has is earthly needs provided for.  “What now?” the man asks himself.  His answer, plow forward and make bigger barns!  There is a call and claim on his life – a deep need to be a vessel of God’s blessing of a world in need – but he can not hear that claim.  He is clueless as to how to feed the spiritual hunger of his soul. “Fool!” declares Jesus.  This night your soul is demanding of you, and who good will all your grain get you?!”

So this is why we are here – to remember the spiritual needs beyond the physical needs.  To tap into that deep love of God and that underlying connection with all human beings that leads us to care and share with others.  And in our own humble way, to be the body of Christ — to witness to the kingdom of God breaking into this world, even now.