The Jarring Story of How Jesus Ended Up in the Wilderness 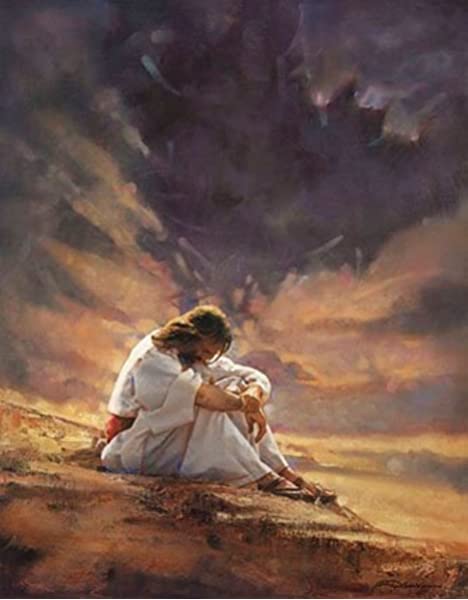 In our children’s time we focused on the first famous wilderness temptation story in the Bible – the forty years the Hebrew people spent wandering in the wilderness, learning to trust God in preparation for entering the “promised land.”   Now we return to the beginning of Mark’s fast paced Gospel for the other famous wilderness temptation story in the Bible.  Listen for the word of the Lord as comes to us beginning in the 9th verse of the 1st chapter of Mark’s Gospel:

In those days Jesus came from Nazareth of Galilee and was baptized by John in the Jordan.
And just as he was coming up out of the water, he saw the heavens torn apart and the Spirit descending like a dove on him.
And a voice came from heaven, “You are my Son, the Beloved; in whom I delight.”
And the Spirit immediately drove him out into the wilderness.
He was in the wilderness forty days, tempted by Satan; and he was with the wild beasts; and the angels waited on him.
Now after John was arrested, Jesus came to Galilee, proclaiming the good news of God, and saying, “The time is fulfilled, and the kingdom of God has come near; repent, and believe in the good news.”

Thus ends the reading; may God bless our hearing of the Word.

Most of us I suspect are so familiar with this basic story that we miss how shocking it is.

Jesus makes his first appearance in the Gospel, immediately having an experience of tender intimacy with God.  Having humbled himself by submitting himself to John’s baptism in solidarity with all the broken folks gathered at the River Jordan, Jesus rises up out of the waters to receive the blessing of the Holy Spirit and hear sweet words of God, “You are my beloved child, in whom I take delight!”

Such affection — such loving intimacy.  The impression we’re left with is of a loving parent holding their child in their lap, caressing them, their eyes sparkling in delight as they whisper sweetness into the ear of their child.

If we’re paying attention as though we’ve never heard the story before, it’s the next verse that would strike us as utterly jarring:  “And the Spirit immediately drove him out into the wilderness.”

It’s a very strong Greek verb that Mark uses here:  The Spirit drove Jesus out into the wilderness.  “Pushed” or “shoved” are synonyms.

It’s almost as if that tender parent abruptly carries the beloved child to the car, straps him into the car seat and drives him to his first day of school.  The child pleads, “hey can’t we stay home and continue to cuddle?”  But the parent is determined, pulling the car up to the curb of the school, shoving the disoriented child out the door of the car and drives off.

There are two ways I think that we soften in our minds just how jarring this transition is.

First, we imagine the wilderness as a nice place – the Spirit whispering in Jesus’ ear, “Hey what say you and I go take ourselves a little camping trip together.  You know, ponder the beauty of nature, catch a few awesome sunsets together?”  But that’s not the primary understanding of the wilderness in the Bible.  It’s not a nice place.  It’s hot, there’s not much food or water, and as Mark reminds us there are wild beasts roaming out there – beasts that tend to avoid the towns and villages – but out in the wilderness are ready to have you for lunch.

The wilderness was also understood in the ancient world to be the place where evil spirits resided.  Mark conveys this understanding when he tells us explicitly Jesus is driven into the wilderness to be tempted by Satan.

So no, it wasn’t a nice camping trip.  Jesus was driven there by the Spirit in order to undergo something hard, something painful.

The other way we reduce the shock of this quick turn of events is to imagine a superhero Jesus, which is  understandable given the stories we will hear later in the Gospel in which Jesus manifests extraordinary power.  We imagine Superhero Jesus striding out into the wilderness and barely breaking a sweat.  “Get serious, Satan!  You think you can tempt me to do bad things?!  I’m the Son of God!”

But Jesus was fully human, just like you and me, just like those wandering Hebrews which means this was indeed a very, very hard time Jesus spent out there in the wilderness.

A superhero Jesus doesn’t really deal with temptation.   The thing about temptation is that without a very real desire or need inside a person to appeal to, it’s just the charade of a temptation.

But if Jesus wasn’t really tempted, he’s not much use to you and I in our times of temptation.

So Jesus was driven out into the wilderness to do some serious soul-searching, which is to say to squarely confront parts of himself that have the potential to thwart the ministry to which he understands himself to be called.

So, what were the sort of things Jesus needed to confront in himself?

The desire to take the easy way out. To play it safe.  To confront the rationalizations his mind can generate to avoid the cross.

The desire to be a success as the world defines success rather than to be faithful to his calling.

He has to confront the desire to make this about himself – that part of himself that would be seduced by the praise and adoration of the crowds telling him how wonderful he is when he heals people, and who would try to persuade him to focus on his healing ministry, and fixing peoples’ problems rather than on that other more central part where he lays down his life in suffering love.

He has to confront the enticement of the anger within him that would succumb to the potent desire for vengeance by fulfilling the messianic role the people are looking for, using supernatural violent force to drive out his enemies, the Romans and the religious authorities who oppress their people.

Remember the Hebrew people mummering in the wilderness, getting nostalgic for life as Pharaoh’s slaves where they didn’t have to worry about starvation?  They were quick to hand over their newly won freedom, and the people would be happy to have Jesus lift the burden of their responsibility that comes with freedom.  But Jesus ministry will not fix all that is wrong with this world – his ministry will invite people into commune with himself, following in his way, creating space for the Kingdom of God where love alone prevails can break into this broken world dominated by the evil forces that oppress people in this world.

And ultimately, I think out in the wilderness Jesus has to confront his fear.  The very human fear that comes in various forms:  the fear of being viewed a failure.  The fear of abandonment and rejection.  The fear of death.

Perhaps our response to all this is to say, “you know I’m down with the idea of soul-searching but I’d prefer a nicer setting.  How about a lovely retreat center down by the ocean where the staff prepares us healthy organic meals and we have plenty of time to quietly ponder the waves?”

Don’t get me wrong.  There is a place for such experiences in the spiritual life.

But the thing about such settings is that we are less likely to lead us to confront the darker desires within our hearts than a trip out into the danger of the wilderness.  There is something about us human beings in which we won’t really changing in any significant way until pain forces us to change.

It is love that Jesus experienced when he was tenderly caressed by God by the River Jordan.  But it was also love – tough love you might call it – that drove him out into the wilderness.

In the letter to the Hebrews there is this verse that refers to Jesus as “the pioneer and perfector of our faith.”  He pioneers the path through which we learn what it means to live by faith.

But if faith is to grow by necessity it needs hard experiences in which the temptation to despair and abandon faith is present because of God’s seeming absence, and the choice is presented to us in our freedom whether or not to cling to the promises of God and the memories of past glimpses of God’s glory.

Jesus is the pioneer who shows us the way to a deeper kind of faith.

Earlier I described our jarring Gospel story as being a little like a shift in which at one moment a parent and child are tenderly sharing a moment of intimacy and the next moment the parent is pushing the crying child out of the car to face the first day of the school.  With Jesus that was a leading misleading.  In one sense he had no choice – the Spirit drove him out into the wilderness.  But he also had the wisdom of what we refer to as the serenity prayer – to accept that which we cannot change and to take advantage of the opportunities to change that which we can – to embrace the necessity of this time of soul searching as a necessary preparation for his ministry.

So, in the season of Lent we are invited to follow Jesus into the wilderness for forty days to confront those darker parts of ourselves that have the potential to thwart us in faithfully meeting our destiny.

It’s strange though this year.  In some sense the world has led us out into a wilderness we did not choose – the wilderness of this pandemic – where there is so much out of our control and so many fears arising within us of varied sorts as well as temptations to despair and the desire to lash out.

Can we embrace the pandemic experience as Jesus embraced his time in the wilderness?  Can we acknowledge the darkness that arises within us – the fear – the despair – the hostility and go to God in prayer, seeking his Spirit to transform the wilderness into something that begins to resemble a garden?

Because that’s what I think happened for Jesus out there in Mark’s version of the Gospel story.  The wild beasts become less frightening as Jesus became aware of the presence of invisible angels ministering to him.  As harsh as the wilderness can be, it can also be a place to encounter God.  God tends to meet us in precisely those plays where we have to acknowledge we aren’t in control and the possibility of a sweet surrender into amazing grace arises.

May it be for us in this season of Lent, and in for whatever amount of time this Pandemic continues.