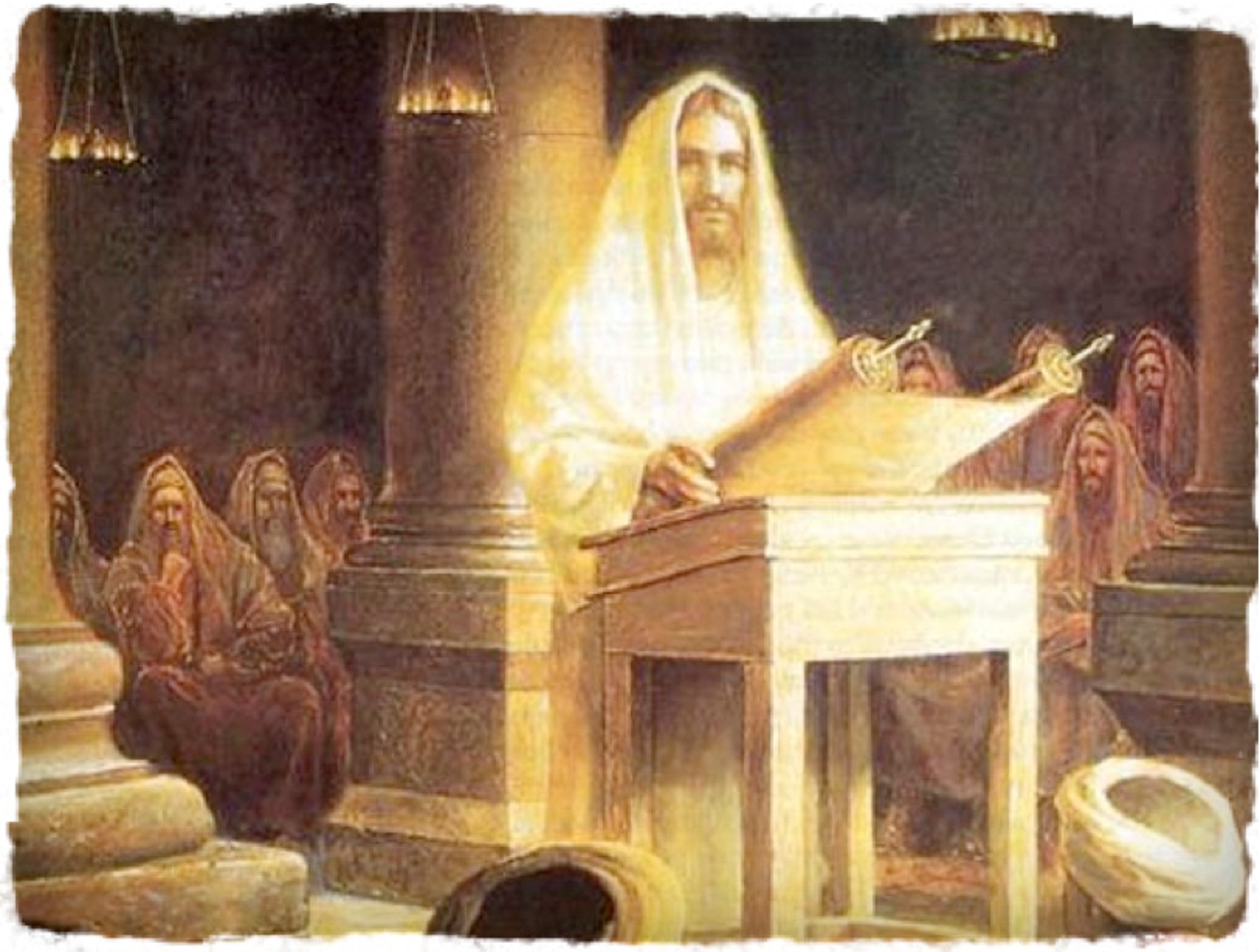 As you listen to the story of the day Jesus taught in his hometown of Nazareth, I invite you to ponder why it was that the initial response of celebration and pride in the hometown boy making a name for himself suddenly turns violent.  Why did Jesus’ hometown turn on him so?
Then (Jesus) began to say to them, “Today this scripture has been fulfilled in your hearing.”
All spoke well of him and were amazed at the gracious words that came from his mouth. They said, “Is not this Joseph’s son?”
He said to them, “Doubtless you will quote to me this proverb, ‘Doctor, cure yourself!’ And you will say, ‘Do here also in your hometown the things that we have heard you did at Capernaum.'”
And he said, “Truly I tell you, no prophet is accepted in the prophet’s hometown.
But the truth is, there were many widows in Israel in the time of Elijah, when the heaven was shut up three years and six months, and there was a severe famine over all the land;
yet Elijah was sent to none of them except to a widow at Zarephath in Sidon.
There were also many lepers in Israel in the time of the prophet Elisha, and none of them was cleansed except Naaman the Syrian.”
When they heard this, all in the synagogue were filled with rage.
They got up, drove him out of the town, and led him to the brow of the hill on which their town was built, so that they might hurl him off the cliff.
But he passed through the midst of them and went on his way. (Luke 4:21-30)

Our second reading is from Paul’s first letter to the church at Corinth.  It is quite familiar because it is the most popular scripture to be read at weddings. At first hearing the famous “love chapter” seems to have little connection to the story we just heard regarding what happened when Jesus went back home. But a connection arises when we consider the situation that led Paul to write the letter.  Paul has heard that the congregation he founded had divided into factions focused on two things:  allegiance to different competing leaders and a competition regarding which spiritual gifts are more important (speaking in tongues, special knowledge regarding spiritual realities, the gift of prophecy, etc.) There is a great deal of hostility present in the congregation which connects to the rage Jesus encountered in Nazareth.

As I read these familiar words, keep in mind that they are written to people who can’t stand being in the same room with one another.

If I speak in the tongues of mortals and of angels,

Note: speaking in tongues was one of the spiritual gifts being battled over.

but do not have love, I am a noisy gong or a clanging cymbal. 2And if I have prophetic powers, and understand all mysteries and all knowledge, and if I have all faith, so as to remove mountains,

4 Love is patient; love is kind; love is not envious or boastful or arrogant 5or rude. It does not insist on its own way; it is not irritable or resentful; 6it does not rejoice in wrongdoing, but rejoices in the truth. 7It bears all things, believes all things, hopes all things, endures all things.

We run into confusion when we use the word “love” because we use the word in so many ways as to render it practically meaningless.  You may be aware that there are four separate Greek New Testament words that are all translated with the English word “love” – each signifying a different aspect of what we refer to as “love”.

Three of these forms of love we might call “natural”, or instinctual loves.

The first is “storge” – perhaps best translated affection.  It is the love that instinctively arises in parents for their children, and hopefully among siblings for one another. This love isn’t really a matter of choice – it arises naturally.

Similarly, a second form of love is identified with the Greek word “eros” and refers to what we might call romantic or sexual love.  It’s what we refer to when we speak of “falling in love” – again not something we so much choose as something that happens to us.

The third kind of love is referenced with the Greek word “philia” – or the love of friendship. This sort of love might seem to involve more conscious choice and yet our friendships arise specifically where we feel a natural affinity with another person.  We see the world in particular ways that are similar to this person which leads to an attractive ease or comfort in their presence.

These three “natural” loves are important, but there is a Greek word that identifies a higher form of love:  “agape”, and this is the quality of God’s love, as in “God so loved the world he gave us” Jesus.   It is a love that isn’t natural to us. It’s the kind of love that Jesus commanded when he tells us to “love our enemies” because that’s the way God loves.  This “agape” love is what Paul is talking about in his famous love chapter.

This might suggest 1Corinthians 13 is misrepresented when it is read at weddings because young couples and their family and friends tend to be focused on the blissful feelings of falling in love, which Paul definitely doesn’t have in mind when he’s writing about love.  But rightly understood, it is perhaps precisely what young couples do need to hear.

All three of the “natural loves” have within them the potential to turn into something very dark and destructive.

I’ve been going through my files in the process of getting ready to move next summer.  I came across my file of old copies of marriage licenses from weddings at which I’ve officiated through the years – some dating back nearly 40 years.  Each of these licenses represent some couple that stood before me at the altar of God pledging to love one another “till death do us part.”  This led me to wonder how things turned out for these couples.  If they express the statical norms of our country then nearly half of them ended up in divorce court where in most instances the one they had once looked at with stary eyes of enchantment now were seen as despicable enemies.

Baptisms have some similarities to weddings.  Parents bring their beautiful baby to the altar moved by this powerful natural affection.  At such moments they are not likely to be thinking about the surly adolescent the adorable baby will one day grow to be.  They aren’t thinking about the unique capacity their child will have to wound them.  There are some very dark feelings that can arise out of the affection with which parents and children originally cherish one another.

This sort of thing might seem to be less the case with friendships.  But consider what happens when you discover your friend holds diametrically opposing viewpoints in areas you’ve never talked about – or if you or your friend begins to change the way you see the world, straying from the opinions you once shared.  It can feel like betrayal, and the breakup can be very painful.  This sort of thing has happened a lot lately over politics.

So, I think recognizing the dark side of these natural loves gives us some insight into what happened in Nazareth that day long ago. The people of Jesus’ hometown felt natural love of affection and affinity for Jesus.  Having been raised up in their midst, Jesus was one of their beloved children who presumably shared their perspective on the world.

But something had happened to Jesus when he was baptized by John at the River Jordan.   The natural love of family affection became less important to him as he was taken possession of by the higher divine love of agape.  In Nazareth, the people felt that as Jesus’ extended family they deserved his loyalty and esteem and they felt betrayed when such wasn’t forthcoming.

When Jesus began telling the hometown folk that they needed to let go of their pride and arrogance because they had no more of a claim on God’s love than some Gentile sinner – well, it felt like a slap in the face.

And that’s when they decided to try and kill Jesus.

Agape love doesn’t come naturally to us.  But it is precisely agape love that we need to keep our natural loves from turning toxic.

When we think about enemies, we tend to picture people who are far from us.  But the people who evoke the strongest painful feelings inside us tend to be people who aren’t so far from us — a spouse, a family member, a friend, a fellow church member.

Every marriage has moments when the partner’s familiar face becomes the face of the enemy.  Where such moments ultimately lead us determines whether a couple end up in divorce court or move into a deepening of their love.  Agape love is precisely what we need at such moments.  It’s precisely what parents and children and siblings need when they hit those sort of “enemy” moments.

One of our favorite ways of talking about our church is to say we are like a big extended family. Our scripture lessons suggest there might be a problem with that.

I’ve often said that if you enter a church and everybody present more or less looks and thinks the same, be careful!  It may feel to those present like a family, but the love that Jesus manifest in the world requires the presence of people for whom love doesn’t naturally arise within us.

“Put away childish ways,” writes the apostle Paul to divided people of the church in Corinth.  Quit requiring that people agree with you, or affirm you in order for you to relate to them with love.

But this of course is easier said than done.

In our attempts to express such love we will encounter our limits.  We will stumble.  There is a kind of necessity to these experiences of failure at walking the Jesus walk because it leads to a humbling of our pride and arrogance – the very thing the people in Nazareth weren’t willing to allow to happen.

We have to go through the movement modelled by Peter when he crashed and burned on the night of Jesus’ arrest, realizing his love wasn’t as powerful as he wanted to believe it was.

The humbling of his pride and arrogance broke Peter open, and created a space for the Holy Spirit to enter.  To his great surprise, the supernatural love of Jesus began to take hold.  The words of the apostle Paul became more of an emodied reality and less of a romantic dream:

Love is patient; love is kind; love is not envious or boastful or arrogant or rude. It does not insist on its own way; it is not irritable or resentful; it does not rejoice in wrongdoing, but rejoices in the truth. It bears all things, believes all things, hopes all things, endures all things.